Scouting robot for the ATO zone. Part of 4 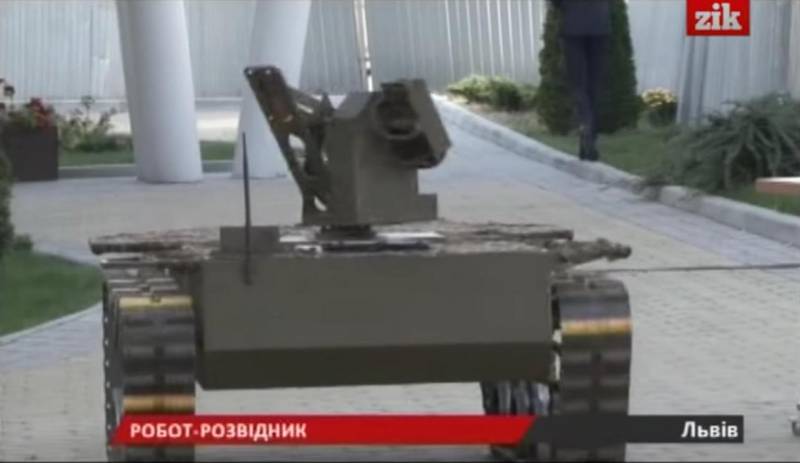 Yes capo
(Da Capo Italy -. A musical term meaning "to play from the beginning").
In response to attacks in the press, on his personal Facebook page Rostislav Pasechnik published the following statement: 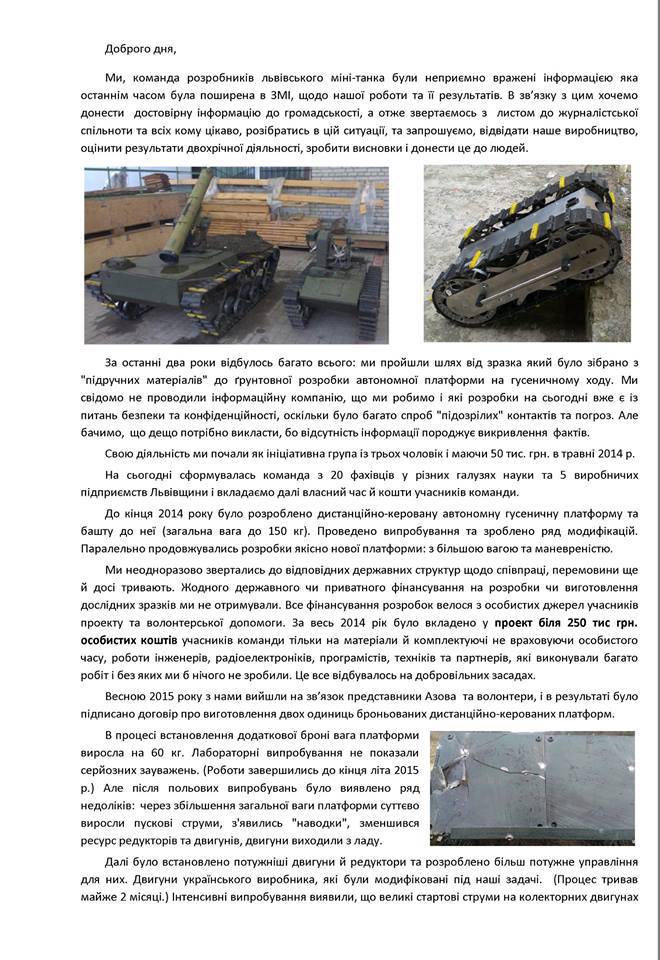 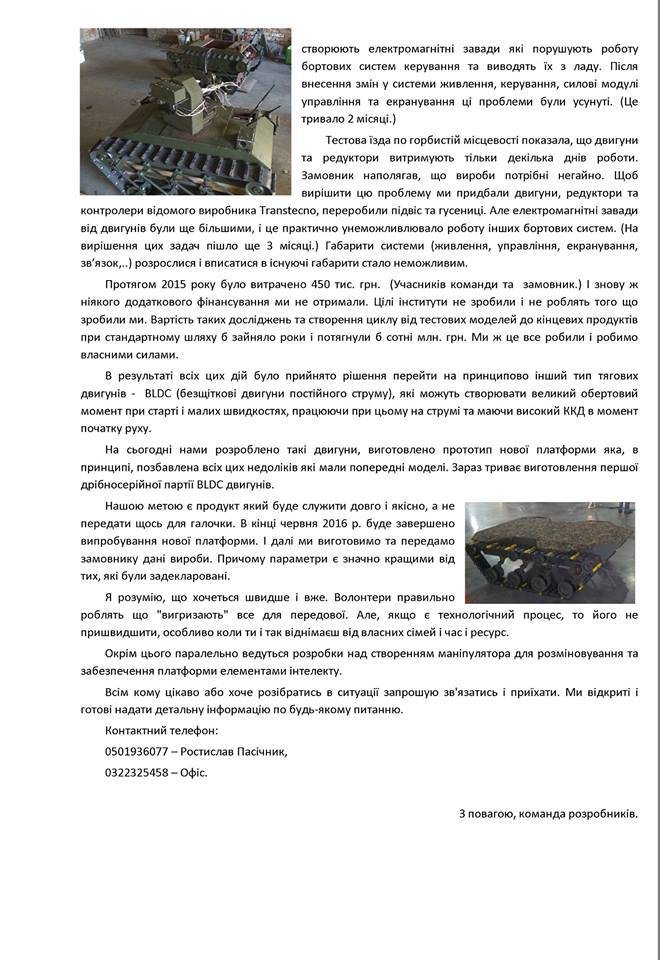 I do not speak Ukrainian, but I understood the general meaning of the document.
After signing the contract for the supply of two cars, it was decided to strengthen their armor.
Additional armor increased the total weight of the machine on 60 kg.
Testing minitank revealed a decrease in the specific power of the power plant *.
The increased weight increased the load on the undercarriage components and reduced its reliability.
New engine, gearbox and controller from Transtecno Group were purchased and installed.
A new suspension and a new track have been developed.
Then they decided to expand the overall dimensions of the machine body and use a valve engine (BLDC).
Ukrainian craftsmen have developed such an engine, and now they are preparing to release the first, pre-production batch.
It took months of hard work, in which many specialists volunteered to take part.
As a result, a prototype of a fundamentally new platform was developed.
The platform is currently undergoing tests, which we plan to complete at the end of June 2016. Then proceed to mass production.
In parallel, there was the development of several remote-controlled modules for installation of the various types of weapons.
The development of a mine clearance device is underway.

One of the activists (Orest Suvoriy) wrote on the same page:
Pasechnik P.E. cheater and liar !!!
In my whole life, no one has lied to me so much !!!
His lies can only be compared with the lies of Putin, Lavrov and Kiselev.
I filed a lawsuit, but it turns out he is a homeless person, he and his wife have no property.
Pasechnik is the founder of "Mail service" with zero statutory fund.
For the last two years he has not been paid.
Again focuses attention, I did not finance the development, I have bought ready-made products for the front !!!
For those who have any doubts or sympathy for Pasechnik RE - read the agreement signed by him.

Earlier, 18 September 2015, the ZIK television channel, published a short report “Lviv IT specialists developed a mini-tank for reconnaissance.
In R. Pasechnik it demonstrates a new Undercarriage and talks about its versatility.
"Depending on the configuration the machine can plow, sow, clean sidewalks." - R. Pasechnik.
Well, just "peaceful Soviet tractor", and more!
But at least, at least outwardly, the platform of the new generation looks like a modern combat robot. 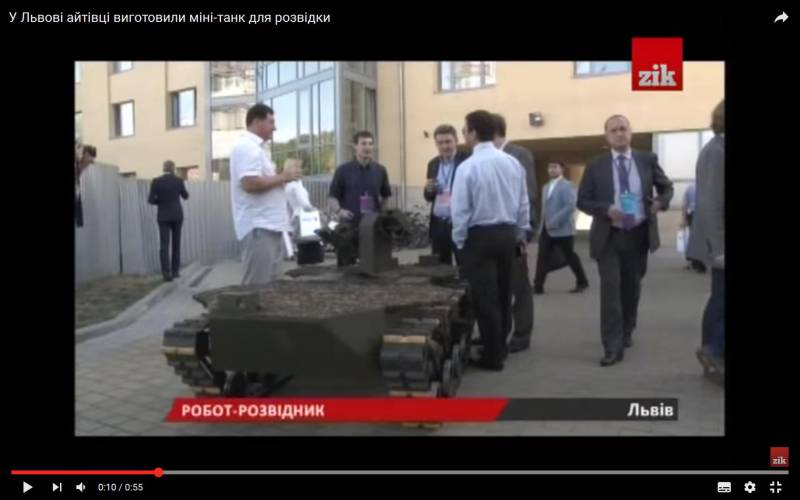 A shot from the report of the TV channel ZIK. Video at the end of the article. 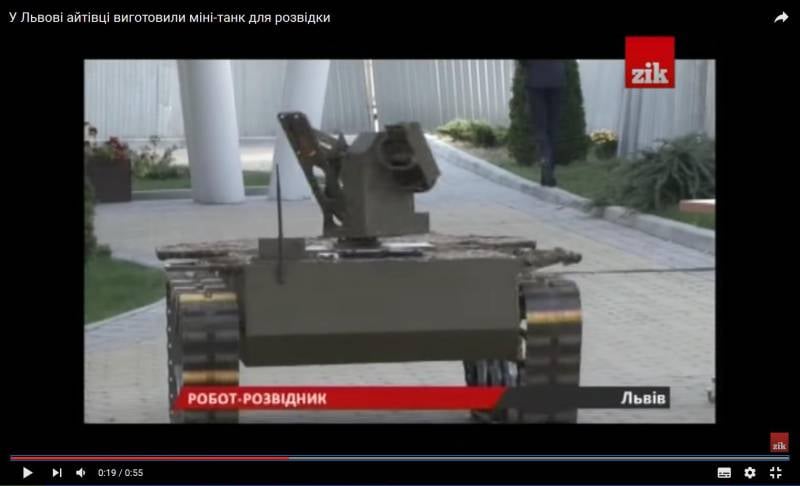 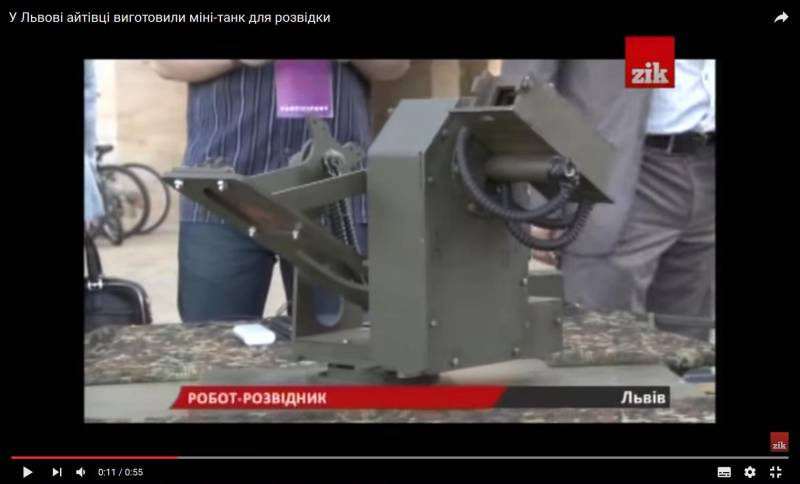 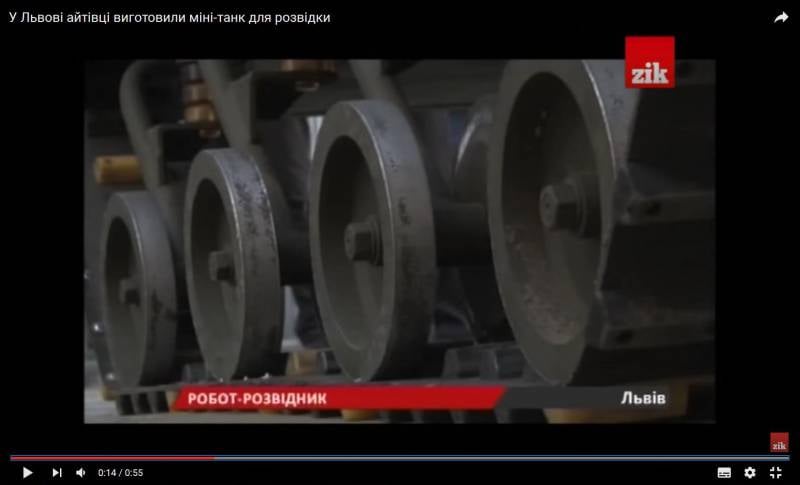 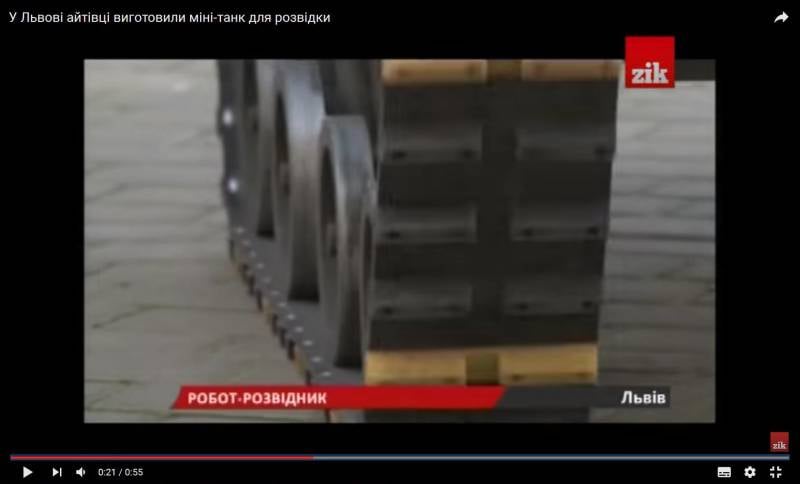 Who is to blame and what to do?
Who is she: a deceived buyer or just a quarrelsome woman?
Who is he: a swindler or playful manufacturer who stubbornly wants to finish the job?
Who is right and who is wrong in this situation?

Judging impartially - out that Basil and Jan Serdyuk right.
They paid money for the goods, but it turned out to be of inadequate quality, and the seller disappeared without returning the money.
That they are seeking the truth in law enforcement is their legal right.
Surprising, by the way, the inaction of these very organs.

And if judged from the point of view of the militia-then this technique should act against them.
And it turns out that Rostislav Pasechnik is a great fellow and should be presented for a reward.
For sabotage in the rear of the enemy.

But from what point of view is not to judge, will announce that the road spoon for dinner.
And all the terms came out long ago and the seller "hit" in penalties for anyone.
What do you think, my dear readers?

In a statement on Facebook, Mr. Pasechnik promised to finish the tests of a new-generation combat robot at the end of June 2016.
But it's already July, but News not yet.
Wait and see what this will end история.
I do not know what it will cost him to whitewash his reputation, but once the boy said - the boy will do.

Not a word about EW facilities.
Indeed, not a word about the effects of enemy EW assets.
Since the development of this radio-controlled complex involved in purely civilian enterprises and individuals - I would not be surprised if it turns out that the developers are not aware of their existence.

I published an article last fall. Combat control system “KomBat”.
I think that the comments on this article are relevant for this, about radio-controlled wedges.

Quote: AlNikolaich
Well, hi-tech rules!
I am tormented by vague doubts that the work system is capable of in combat conditions ...
Electronic counteraction, blocking of air, jamming ...

Quote: Darkmor
It should not be used laptops and tablets, and special protected military communications.
Electronics requiring radio wave communication is very easy to detect and decrypt.
At best, this vundervaflya simply will not work in noisy environments.
In the worst case, it will give information to enemies about your location, the location of your allies, and your tactical mission.
It's easier to shoot yourself.

Quote: Good
EW opponent without any effort will turn this system into a pile of useless devices!
The result will be sad.

Quote: domiemon
Of course, electronic suppression is possible, but at the moment, as far as I read, both the APU and the BCH at the front end at the level of platoon or company strong points of the EW are not very common, so from this point of view the risk is not great.
The risk is that due to the peculiarities of the terrain or while in the building the wifi may disappear
and it is precisely this time that can be the most critical for a fighter or unit.

Alternative development: folk tank Gennady Nichiporuk.
In November 2014, all Ukrainian media started talking at once: "In Nikolaev, enthusiasts make a national tank."
And indeed, in the Nikolaev region the development of a radio-controlled tank was in full swing.
The author of the project for a national tank from Nikolaev was Gennady Nechiporuk, the project engineer was Valery Prud (a former personnel tanker). 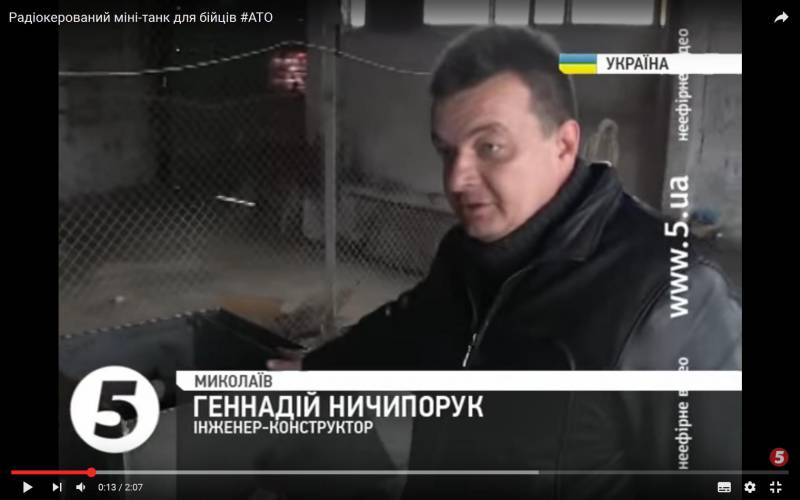 Were dropped on the national tank on the site of the All-Ukrainian Center of Volunteers, which specializes in raising funds in favor of the army.
Donations were listed not only by sympathizers from Ukraine, but also from the USA and Australia.
On the progress of work and expenditure of funds informed on the page on Facebook: laid out checks and invoices, photos and videos.
Now this page does not exist. 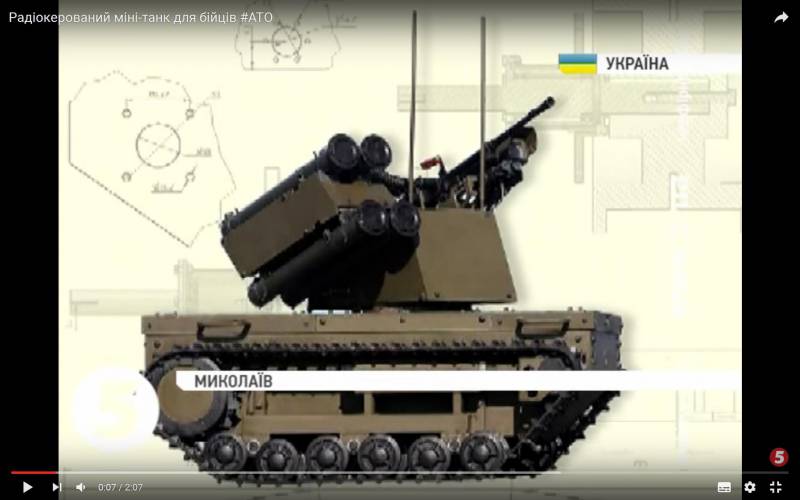 Photos of the future of the Ukrainian national tank. 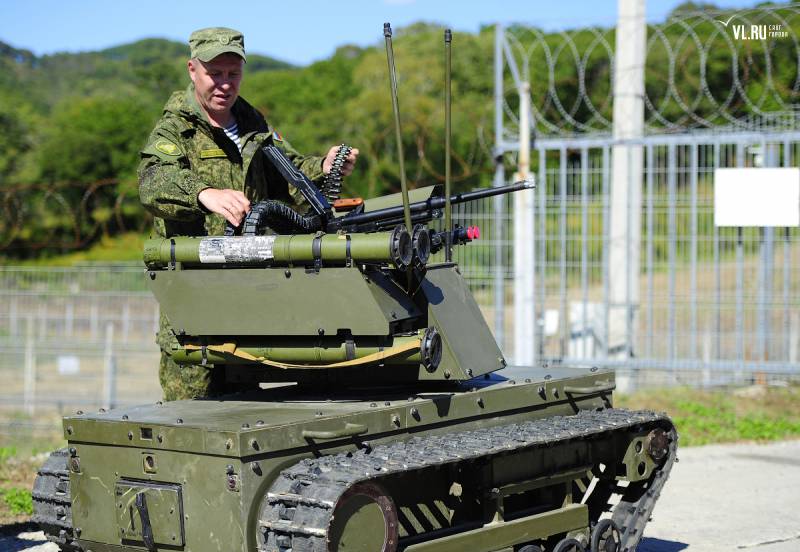 Photo of the Russian complex “Platform-M”.

The Platform-M shock system is a universal self-propelled tracked remote-controlled platform.
The universal platform was developed at the NITI Progress (Izhevsk) by order of the Ministry of Defense of the Russian Federation. 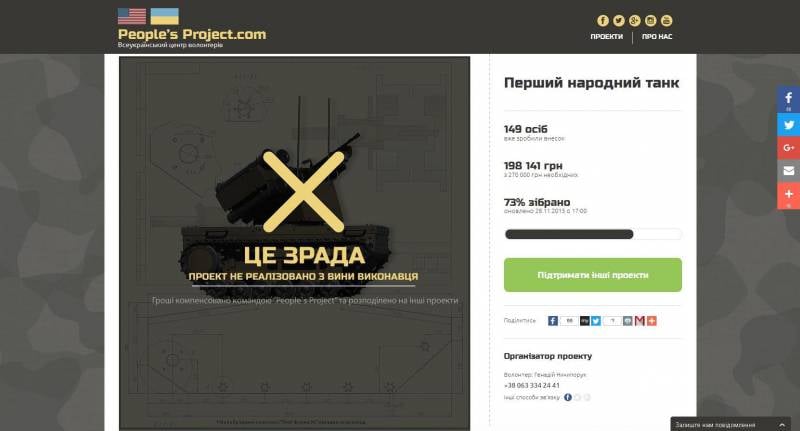 The cost of the project was estimated at 270 thousand UAH (11 thousand USD).
Until 28.11.2015, 149 individuals donated money to this project.
During this time, 198 thousand hryvnia (8 thousand USD) was collected.
After that, the fundraising was stopped due to the artist’s fault, and the funds collected for the construction of a folk tank were redirected to finance other popular projects.


A tank to build is not an ass to buy.
All this would be funny if it were not so sad.
They say they learn from mistakes.
I propose to learn from the mistakes of others.

The production of drones is troublesome and expensive.
Far from every state with a developed production and economy can afford their development and production.
From the report of analysts of the company "Forcast International" I learned that the cost of the production of unmanned vehicles and their service - this is not all.
Almost as much need to spend on research and development: research and development, developmental work, technological work.
The same report says that in the period of 2014 – 2023, only the US UAVs will spend 25,3 billion dollars, Israel 2,2 billion, all European countries - 1,9 billion.
Their development should not be engaged in self-taught, they should not be produced on a whim and from scrap materials.
And no loud statements like '' 300 tanks per month - easy! ”.

An example from personal practice.
During the year I had the opportunity to work side by side with the development team.
The guys are developing software for the civilian market.
For several years in a row, they have supported one investment project (Forex).
The product is constantly supported by a team of specialists of a different profile specially formed for this project, including: project manager, software architect, analyst, engineer, programmers.
And programmers of this level, for whom the status of the Zend Certified Engineer is not just words, but a personal certificate in a box on the wall.
During the week, programmers write updates, then a team of testers checks the updates on the test server, after which the updates are uploaded to the “combat server” and tested again.
Dozens of updates every week. And so from month to month, for several years. Hundreds of man-hours and thousands of dollars every month just for the support and development of the product.

And then - Ukrainian self-made and one programmer decided to donate donations from retirees and housewives to collect cheap counterparts from the MAARS military robots of the Talon Robot and Platform-M defense project.

This concludes the series of articles on Ukrainian combat robots.
I conceived this material as a short article with curiosities, but it turned out a whole journalistic investigation.

I brought all the data that I managed to find and gave you food for thought.
I would appreciate your additional information and comments.

Thank you for attention!
The end.
In Lviv, IT specialists manufactured a mini-tank for reconnaissance (18 Sep. 2015)