Scouting robot for the ATO zone. Part of 3 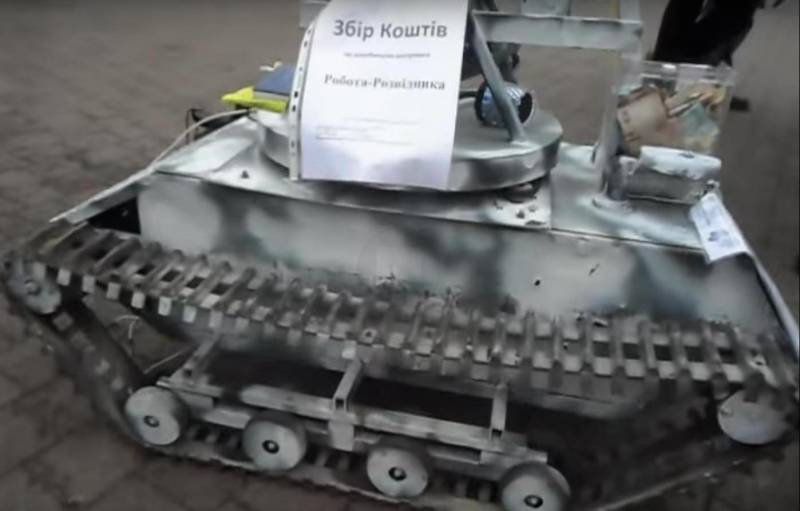 The second tank. Volunteers to the front.

After another television broadcast dedicated to the intelligence robot, Lviv activists (volunteers) also became interested in this miracle-a tank.
But how else: after all, a universal combat robot could save the lives of Ukrainian soldiers and, in addition, it is several times cheaper than its foreign counterparts.
And volunteers turned to the developers.
During the meeting, Mr. Pasniknik told the activists: our production facilities together with qualified specialists allow us to produce up to 300 robots per month.
We work according to the principle: money in the morning - afternoon chairs.
If there is money, there will be tanks.
And the activists went to the people to collect money.

Collect money.
23 January 2015 published a note “Lviv citizens are dumping on a radio-controlled tank”.
It was reported that the charity organization “Promoting Community Initiatives” (Springs for community initiatives) is raising money in the center of Lviv to build a reconnaissance robot.
The fundraising takes place on the same square in front of the Lviv Opera and Ballet Theater, which in November last year showed the first tank, built with funds from the artists.

Attention passers-by attracts a small tracked vehicle in winter camouflage.
The paper stuck on the car and the donation box speak for themselves.
But there are several young volunteer guys who are ready to give explanations.
According to them, the tank can deliver cargo to hard-to-reach places, evacuate the wounded and drop up to three minutes while moving.
Volunteers add that on board the mini-tank there are eight video cameras, as well as a microphone with a loudspeaker (mathematical).
The cost of the tank - from 40 thousands of hryvnia and above (probably depends on the configuration).

Volunteers say that Lviv is actively involved in fundraising. Therefore, they have already managed to collect most of the amount.
“We’ll give all the funds to a company that develops radio-controlled tanks,” the guys added.

The mini-tank is planned to be transferred to the fighters of the 80-th separate assault landing brigade. 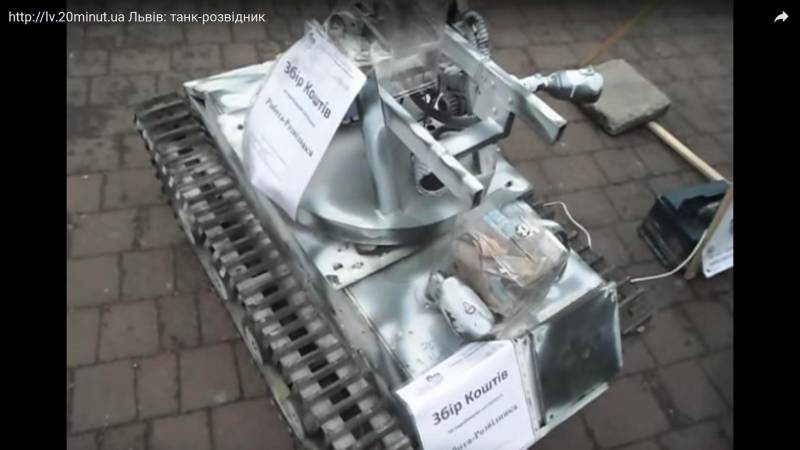 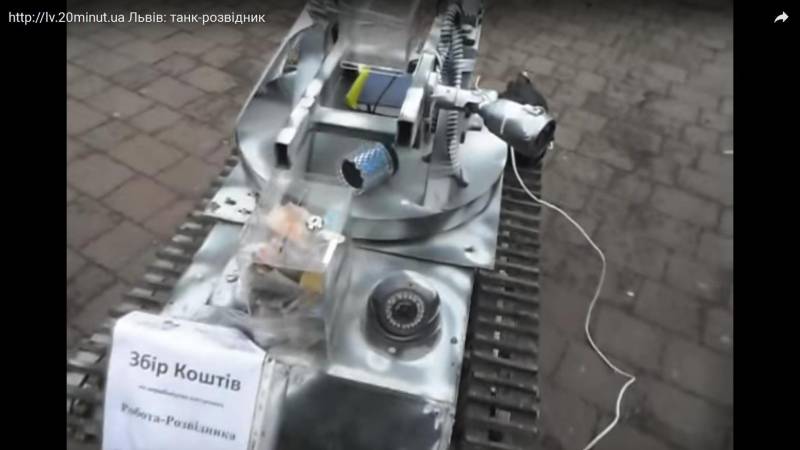 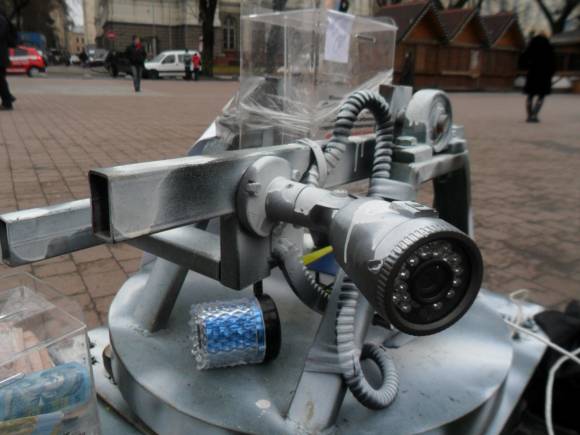 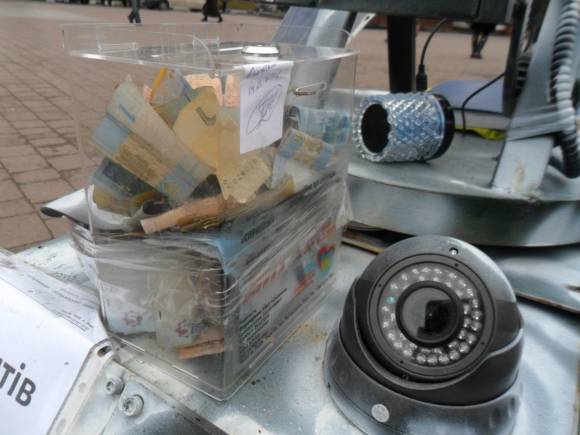 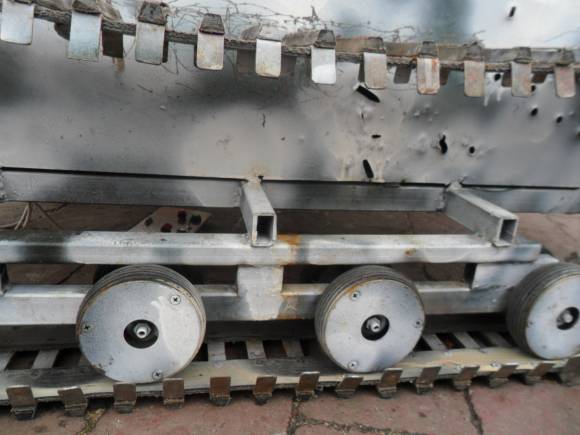 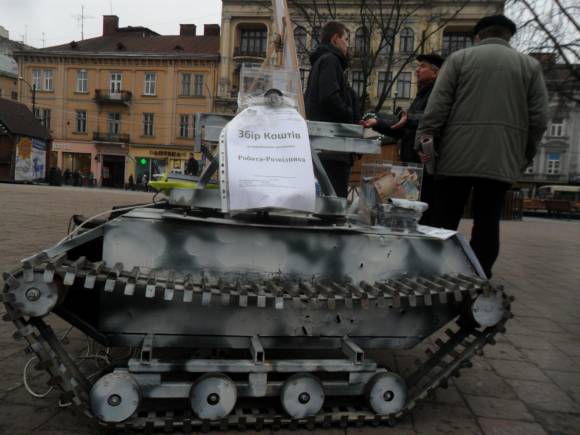 The case is very similar to the one that was shown to fans of robotics a year before these events. 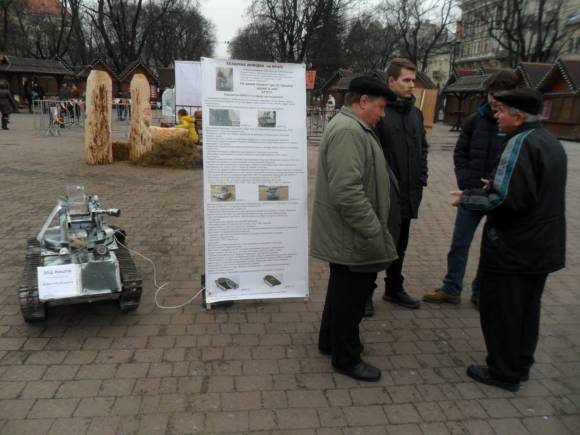 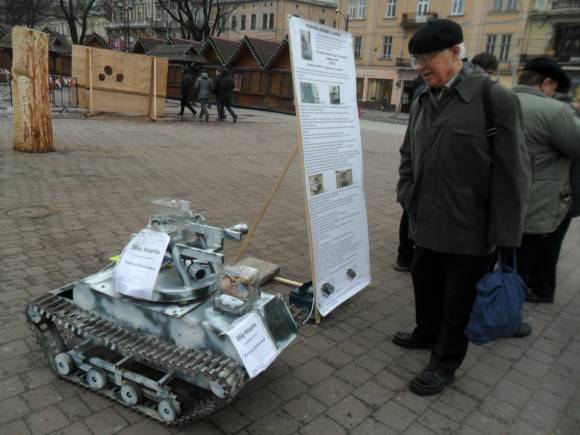 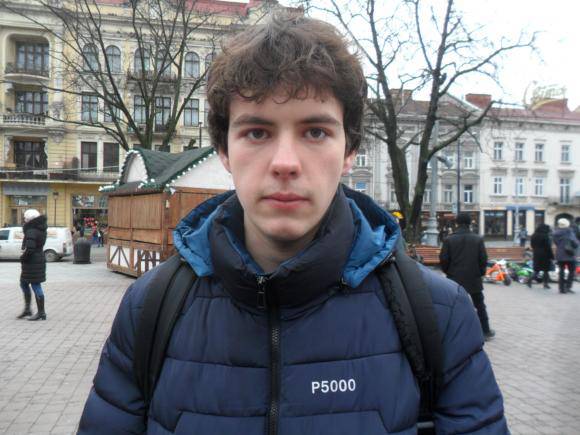 Volunteer Taras. A person close to the Ukrainian robotics.

Taras, a volunteer of a charitable organization:
- At the moment, three robots have already been involved in the ATO zone.
They conduct reconnaissance almost around the clock.
This technique is also shock resistant ...

Oh, Tarasik!
It would be better if you studied properly, but read books ...
I can advise the novels of your countrymen "The Twelve Chairs" and "The Golden Calf".
And if you hated the work of the Soviet period - read the collection of stories "The Noble Swindler", written by the American O. Henry.
You would not have had to collect money for combat robots and tell stories to old people about the fact that the 3 tank was already rushed to the war right from the theater square and wet the Muscovites day and night.
And now you can’t look people in the eye and take the rap instead of the bad uncle Rostislav Pasechnik.

Volunteers raised money and 23 on April 2015 entered into an agreement with Mail Service for the supply of two tanks. 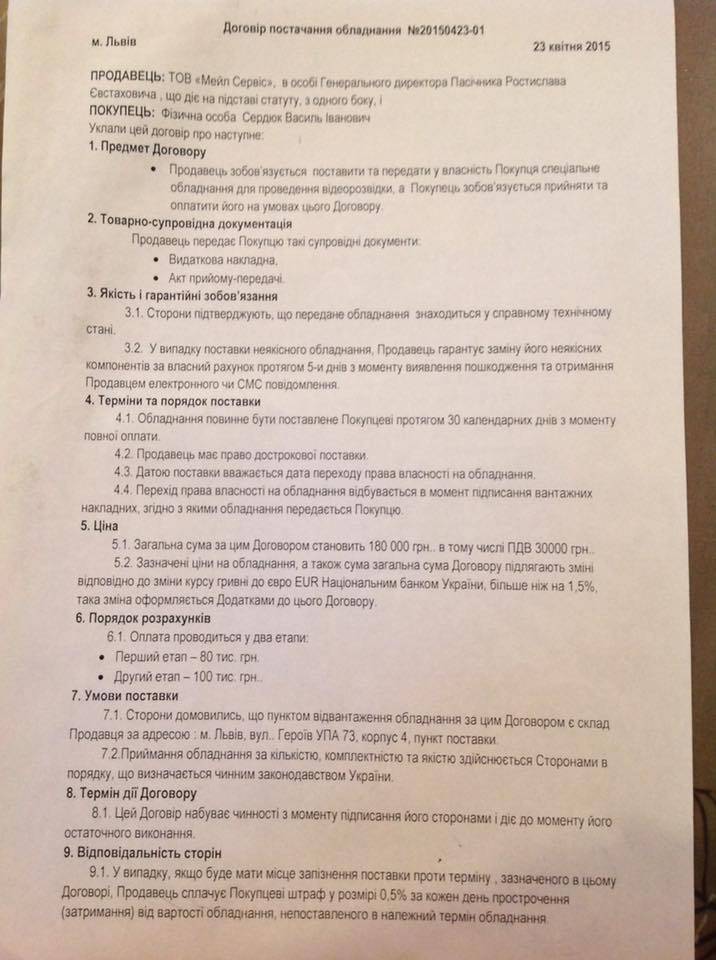 The contract is only on the 2 page, but the honor is in honor: Pasechnik Rostislav “from one side” is obliged to supply special equipment for video surveillance.
The document contains a description of penalties in the amount of 0,5% for each day of delay and force majeure.
I ask readers who have a Ukrainian answer: are warranty obligations indicated in the contract? 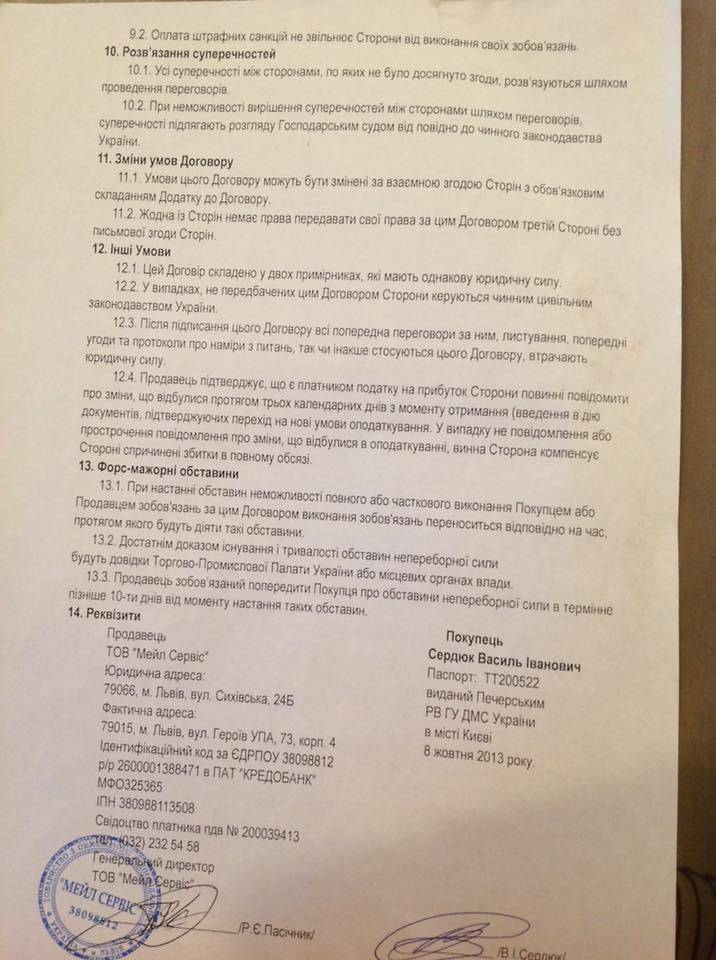 From the customer’s side, the contract was signed by activist Serdyuk Vasiliy Ivanovich, known for his charitable activities. 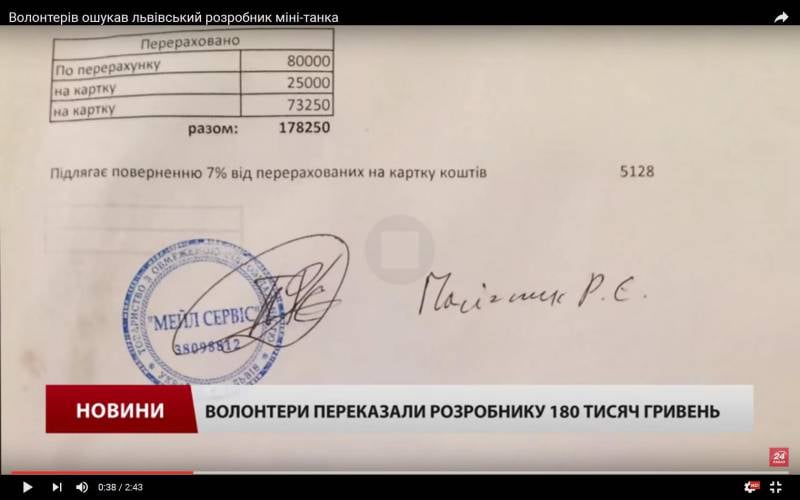 Annex to the contract.
Total Listed 178 thousand hryvnia (7,423 USD).
Of these, to the bank account of the enterprise 80 thousand UAH (3,333 USD), another 98 thousand (4,090 USD) - to the personal card of the entrepreneur.
Strange layout and form of payment. We can only guess why.

Scandal in the press.
25.05.2016 on the RIA website News Ukraine published a note: “In Lviv, a scandal erupted around the development of an unmanned mini-tank.”

All Ukrainian media picked up the news. Gradually, foreign publications, including Russian ones, began to write about the scandal.

In preparing this material, I told my spouse history about a mini-tank with an engine from a washing machine that drove a few meters and smoked.
She smiled and said:
- Apparently they set the wrong washing mode. It was necessary to choose the mode “Intensive washing” or “Sport intensive” ...

A statement to the police.
Apparently, the supplier did not repair the faulty equipment and did not replace it with a new one.
On the second tank was not discussed: it was not in sight.