Scouting robot for the ATO zone. Part of 1 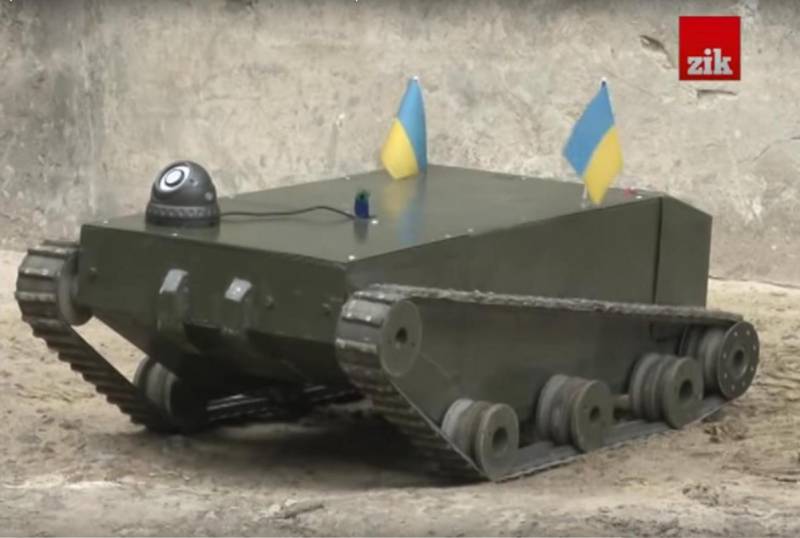 From Ukraine also always come something new, sometimes funny.
And now: I did not have time to calm down the scandal associated with installing cameras from intercoms as surveillance devices at the BMPT “Azovets” - as a new scandal broke out.
And also associated with military equipment for the ATO zone.
It история There is no end to how a peace businessman suggested instead of sending soldiers to send cyborg to the front line and thereby save lives and protect the homeland.

In short, the story is:
As previously reported earlier A Lviv entrepreneur, a certain Rostislav Pasechnik (Rostislav Pasichnik), presented to the general public a remotely controlled robot (mini-tank, also known as a reconnaissance robot).
Lviv activists (volunteers) organized a fundraiser and, having collected the necessary amount, transferred money to the details of the entrepreneur.
But the businessman was unable to fulfill his obligations and stopped answering calls.
As a result, the ATO fighters did not receive the equipment, the entrepreneur disappeared, and did not return the money.
In general, the Ukrainian Terminator is not destined to save the lives of soldiers Square.
Но обо всем по порядку.

Start of development. The assumptions of the author.
According to the developers, a robot intelligence officer had to replace the Ukrainian soldiers in the most dangerous areas, and therefore reduce losses among personnel.
Apparently, the idea of ​​creating a combat robot arose in the 2013 year, even before Euromaidan, that is, under Yanukovych.
At the same time, work began on its creation.
Most likely, the work on the tank reconnaissance tank project (tank tank) was proceeded slowly.
But in the spring and summer of 2014, when the civil war on the territory of Ukraine was in full swing - the work on the creation of a combat robot was forced, in November 2014, one tank was presented to the public and sent to the combat zone.

Technical requirements. The assumptions of the author.
I could not find any technical specifications or documentation for the Ukrainian robotic complex.
But I studied all the reports, publications in the media and comments on this topic, summarized all the data and spread them below.
I think that I am not far from the truth.

Like foreign military robots, the Ukrainian mini-tank was supposed to monitor enemy territory (reconnaissance and surveillance), deliver ammunition and equipment to the battlefield and evacuate the wounded from there.
The robotic platform was conceived not only as a transport, but also as a means of fire support.
Therefore, attempts were made to adapt the machine to equip weapons of various types.
As a result, the Ukrainian military robot could provide not only fire support for the infantry, but also fight the enemy’s armored vehicles and even destroy its defenses.

In the future, it was supposed to develop more functional versions of 2: a robot sapper and a fire robot.
In the role of a sapper, the combat robot was to transport up to three minutes and drop them at the signal of the operator on the territory of the enemy, as well as be used to neutralize mined objects.
Performed by a robot-fireman, it was supposed to offer it for the needs of the Ministry of Emergency Situations: to perform rescue operations and tasks for the protection of sensitive objects without human intervention.
I think that the latter refers to the third performance: the robot-watchman.

To reduce conspicuity, the probability of overturning by a blast wave, as well as to increase survivability - the body of the robot must have small dimensions and a low profile.
The body of the machine must protect the internal units and systems from small arms weapons and splinters.
The robot must be controlled remotely by an operator at a safe distance (1-2 km.)
To provide the operator with a circular view, a set of day / night cameras should be installed on the machine.
In order for the operator not only to see, but also to hear what is happening on the battlefield, the reconnaissance robot must be equipped with a microphone.

The robot must move over rough terrain, overcome obstacles, steep ascents and descents.
Therefore, to increase the maneuverability of a combat robot, it is preferable to equip it with a tracked propulsor.
Tracked propulsion will be driven by an electric motor that will be powered by batteries.

The main developers.
According to Rostislav Pasechnik, about 50 people were involved in the development of a combat robot.
These are enterprises, scientists, energy.
Were used production facilities of LLC VEEM Metallavtoprom (production of passenger seats for public transport and metal work: laser cutting of metal, metal bending).

Engine and special gearbox for tank were developed at JSC Elektrobytpribor (50 years on the market of household washing machines).

He took part in the development and the university "Lviv Polytechnic" (the oldest technical educational institution of Ukraine).

The general management and coordination was apparently carried out by Rostislav Pasechnik, director of iT-service Mail company.
I suggest to pay special attention to the professional activity of this respectable entrepreneur. 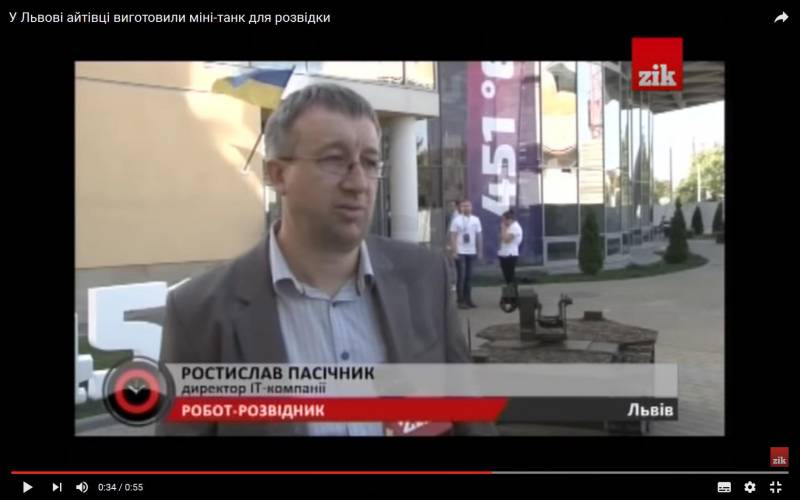 I found information about the company "Mail Service" on Prom.ua
This is what his IT company did: 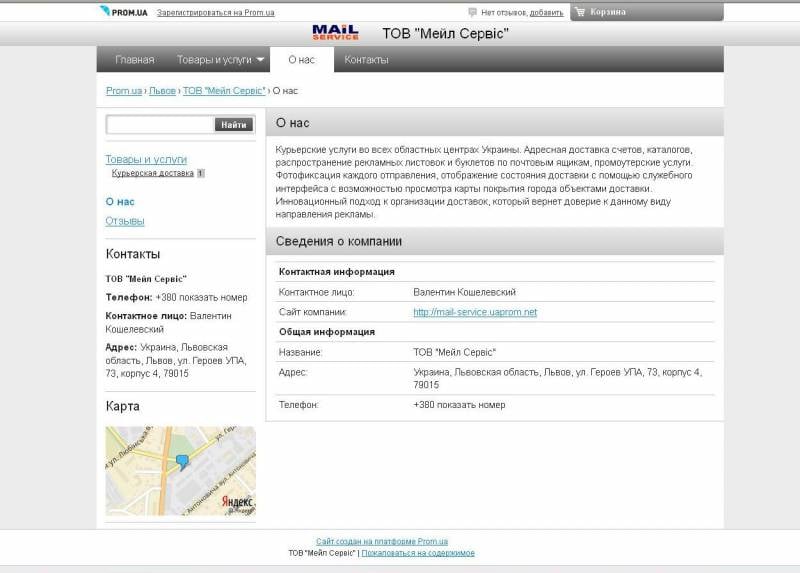 No doubt, the spread of spam in mailboxes has always been related to information technology.
Especially when the owner of the company language is suspended.
As Ostap Bender used to say:
- Who will say that this is not so, let the first one throw a stone at me! 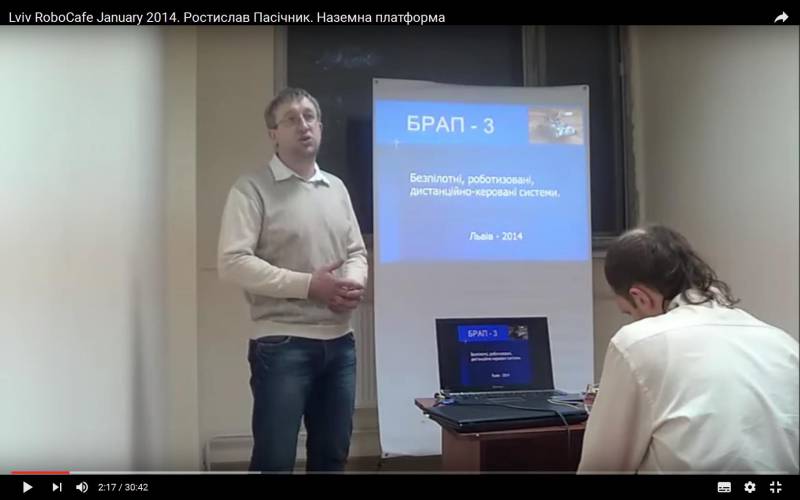 Sounds a question from the audience:
- Do you think that it is enough to have an explosion next to the tank in order to destroy the tank with an explosive wave or knock it off?
Rostislav Pasechnik reports that the maximum height of the tank of the entire 80 can be seen, and therefore the blast wave is not terrible for him: it will pass higher. 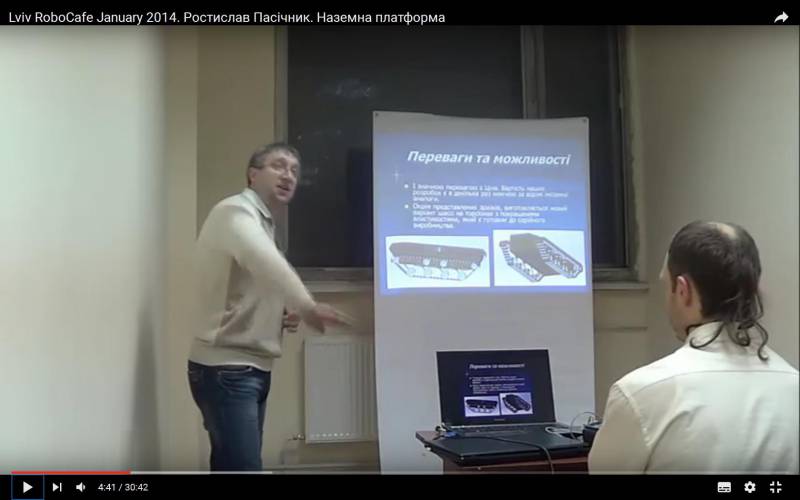 Rostislav demonstrates the hall (literally on the fingers) that the blast wave will bypass his tank side.
Is that the explosion will occur in the 1 meter from the tank or less, but this is unlikely - adds the speaker. 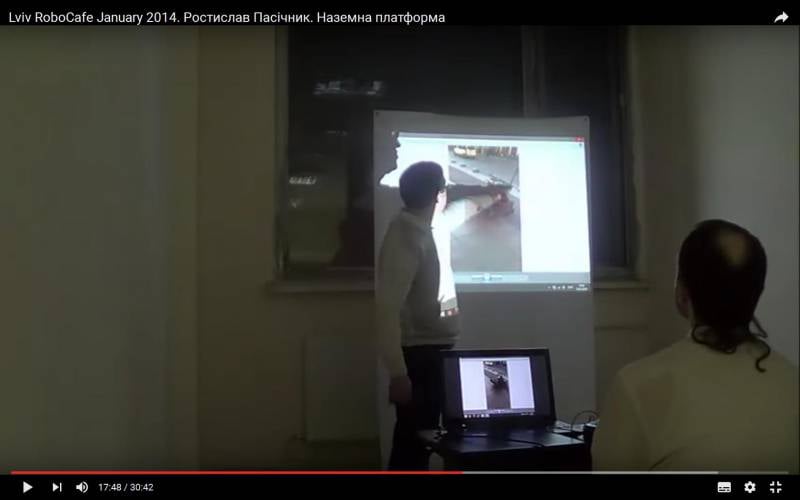 The co-author of the project draws attention to the 2 slats for installing 30-mm grenade launchers. 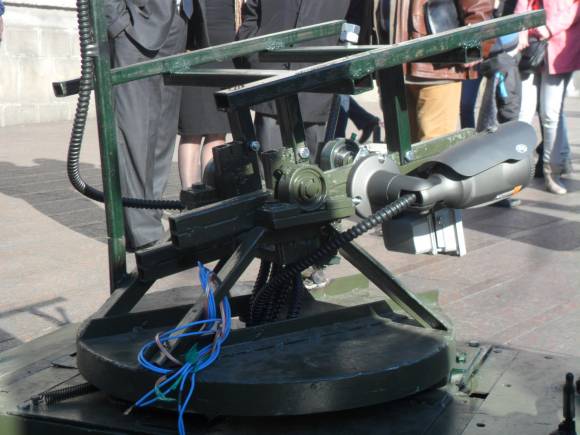 These are the very guides for the two grenade launchers, about which Pan Paschnik speaks. 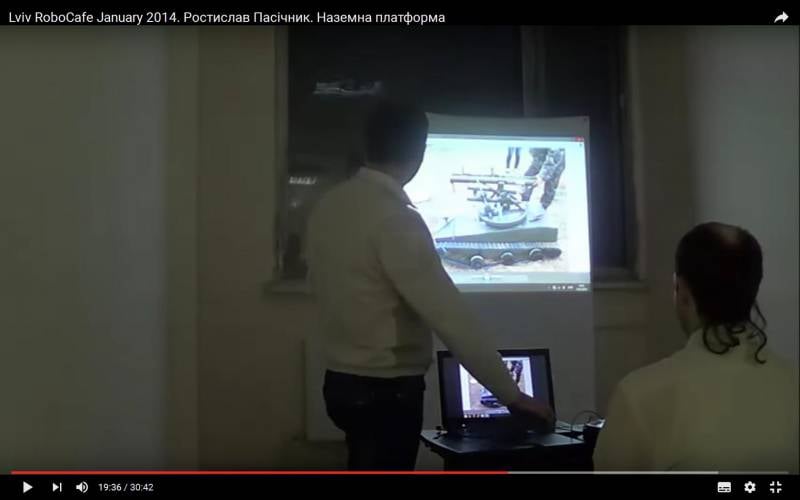 The prototype of a reconnaissance tank with two installed RPU-18 PU “Fly”.
The only photo that was found.

Rostislav assures lovers of robotics that when attacking 2-3 robots armed with RPGs - the enemy tank has no chance to survive.
I understand that we are talking about MBT T-72 and T-90. 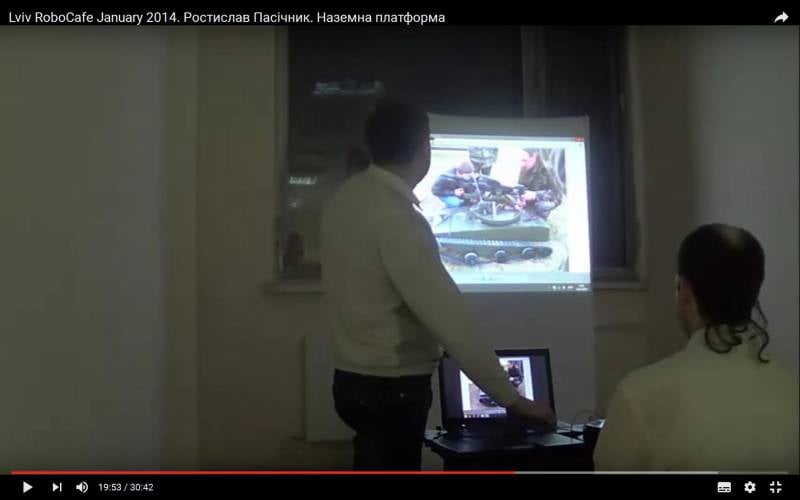 The prototype of a reconnaissance tank with an AGS grenade launcher installed.
The only photo that was found.

Another question from the audience:
- Can he be immobilized by shooting from Kalash?
Speaker response:
- Unreal! It is possible to pierce the armor plate, but it is located at such an angle that after its penetration, the bullet changes its trajectory, loses energy and simply falls to the floor of the reserve space.
I will say more: in order to kill the caterpillar from the AK - it is required to flash it with an automatic burst over the entire width, which is also unrealistic. 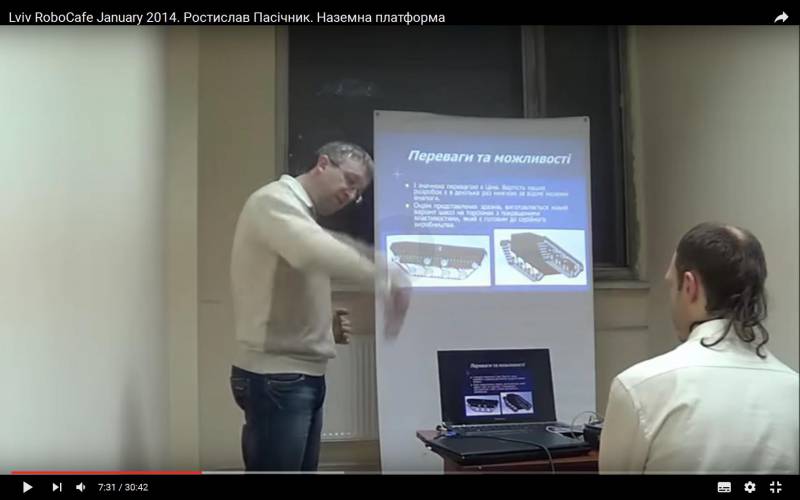 This is the trajectory of a bullet in the space.

By showing a slide with the results of the shelling of the hull, the lecturer informs the audience that the body had made 40 AK shots without damaging the components and systems of the mini-tank. 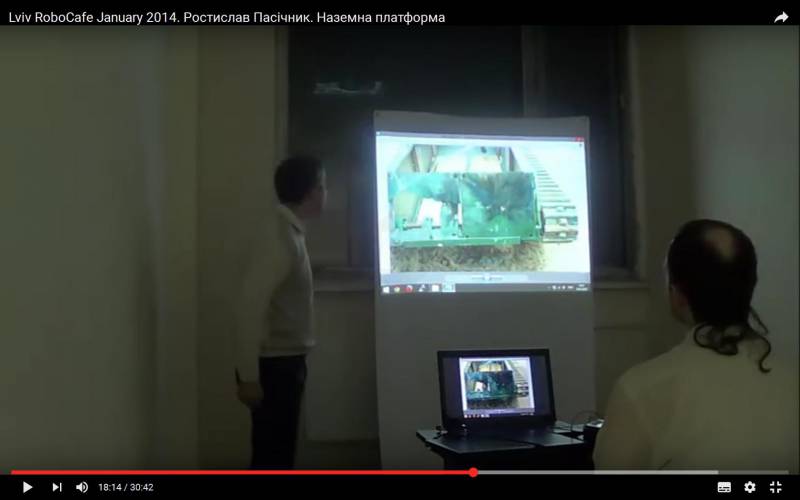 The results of the shelling of the upper frontal parts of the tank reconnaissance.
On the left - hits from the SVD from a distance of 90 meters, on the right - hits of armor-piercing bullets issued from the Kalashnikov 7,62-mm assault rifle.

Please note that this is a different case.
The location of the frontal parts, their size, the very form of the body, tracks, rollers - everything is completely different.
While the lecturer poured about bulletproof covers for video cameras, a gyroscope, a compass and other useful features - he slipped the photo of another car to the public.
And if another car - and the results of others.
Just sleight of hand and no fraud.
I post the video of this speech at the end of the article. 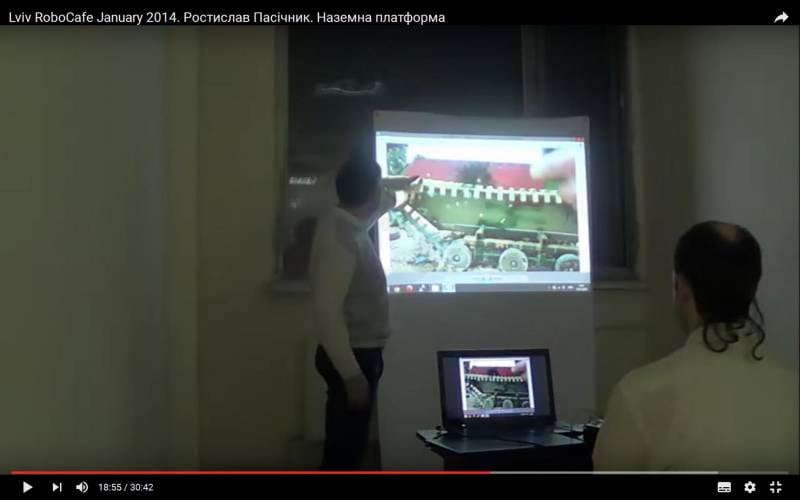 The results of the shelling of the hull of the tank scout tank.
The speaker explains that the top side sheet is Polish armor, which is bought for 3 thousands of Euros.

Mass fame.
In the 20 of September 2014, the Ukrainian media was filled with joyful news on the topic "Lviv IT specialists developed a mini-tank for reconnaissance."
Internet publications, TV channels - all published an interview on this topic.
The mini-tank caused a real sensation.
The mayor of Lviv, Andrei Sadovy, the director of VEEM Metallavtoprom Bogdan Sapozhnikov, and of course the director of Mail Service Rostislav Pasechnik, all gathered in the assembly shop and gave each other interviews.

In front of the cameras, the amazed reporters demonstrated the qualities of their brainchild. 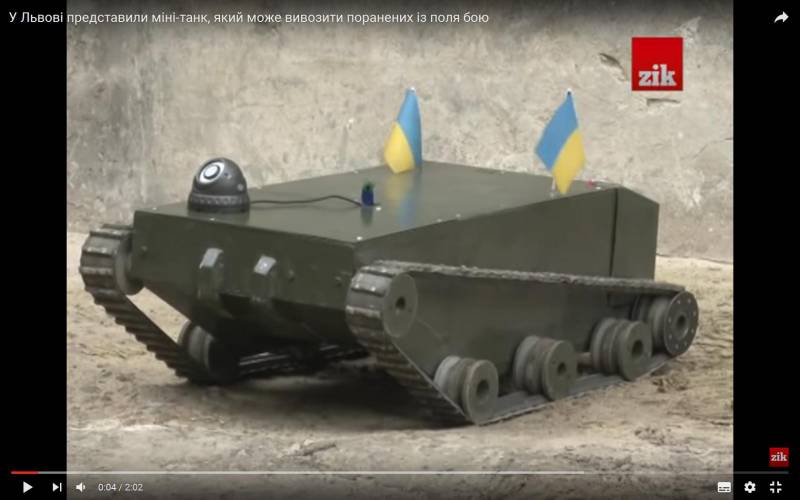 Meet the reconnaissance tank Pasechnika.
Yet one-eyed and without weapons.
Not visible "Polish armor for 3 thousand," and the shape of the hull is different.

It looks pretty cheap and rather miserable.
German self-propelled mines "Goliath" since the Great Patriotic War look much more solidly and impressively. 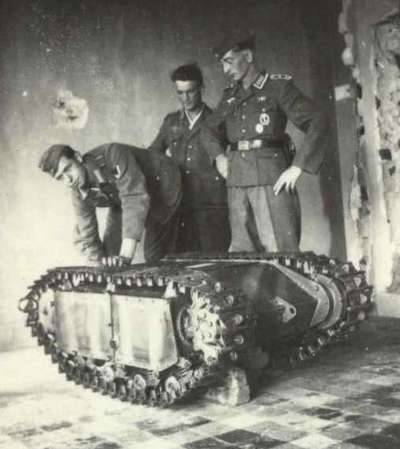 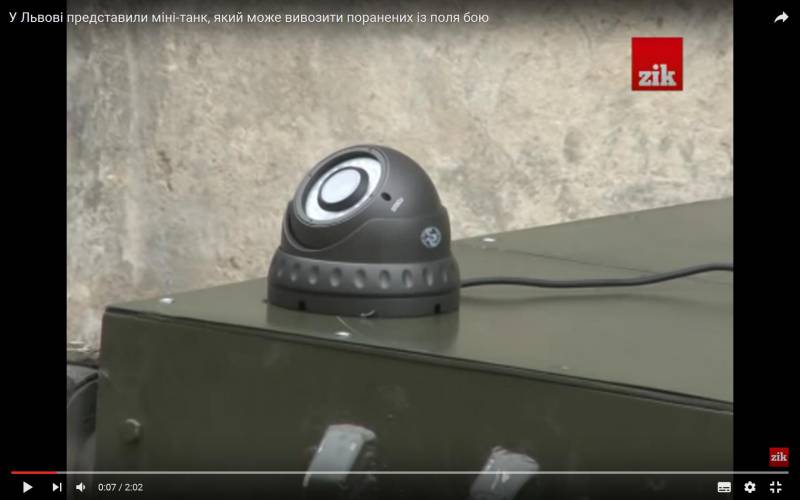 I am not an expert in military robotics, but I had to evaluate the video surveillance system for the oil terminal and oil refinery. For such objects it is required to install explosion-proof cameras according to the requirements of ТР ТС 012 / 2011.
As for optics (lens) - a separate topic for some money.
The developers guaranteed the work of the complex in snow, rain and in low light conditions. It is unlikely that this camera will be enough.
Looking for specialized cameras, each for the price of a SLR camera.
And then military equipment - and the usual IPTV camera.
In general, the story with the observation devices on the BMPT “Azovets” was repeated in this sample. 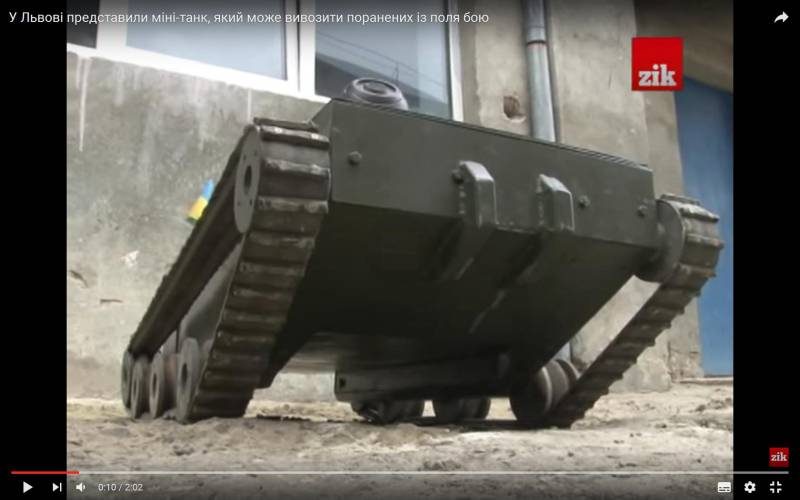 Very good angle. Whatever you say, it looks impressive. 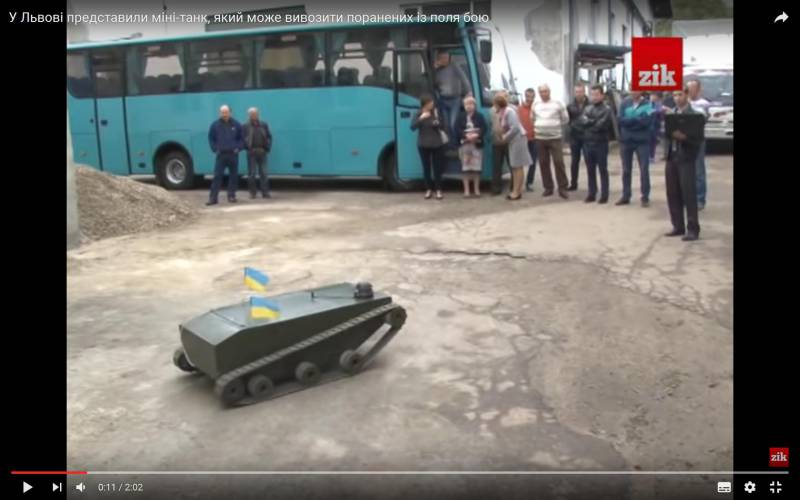 Mini-tank effectively travels towards the group of guests.
Pay attention to the young man with a laptop in the right corner of the photo.
Most likely, it controls the robot via a WiFi connection. 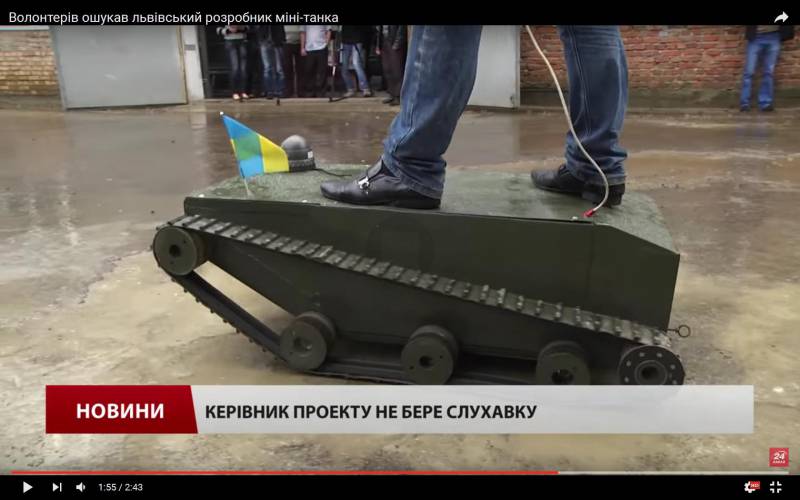 Demonstration of payload.
Well, just skate on the tracks, and only ... 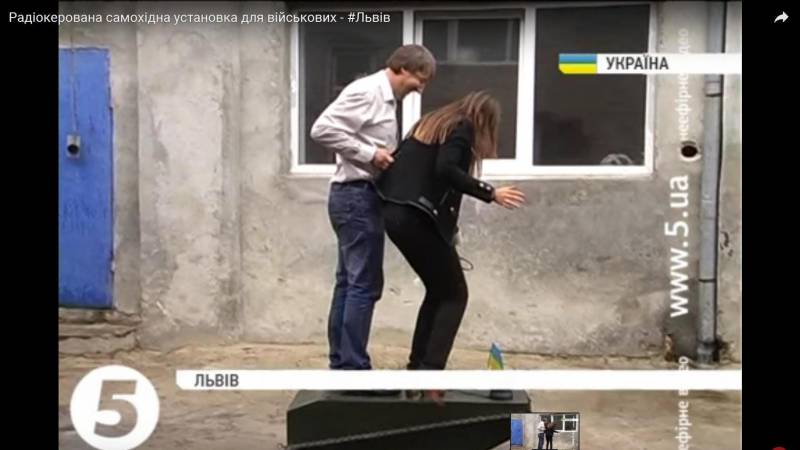 Demonstration of payload.
A mini-tank with an engine from a washing machine can carry two “passengers”.

Demonstration of the evacuation of the wounded.
As the saying goes, "It was smooth on paper, but they forgot about the ravines."
Pay attention to the stretcher and imagine the like on rough terrain, in real combat conditions. 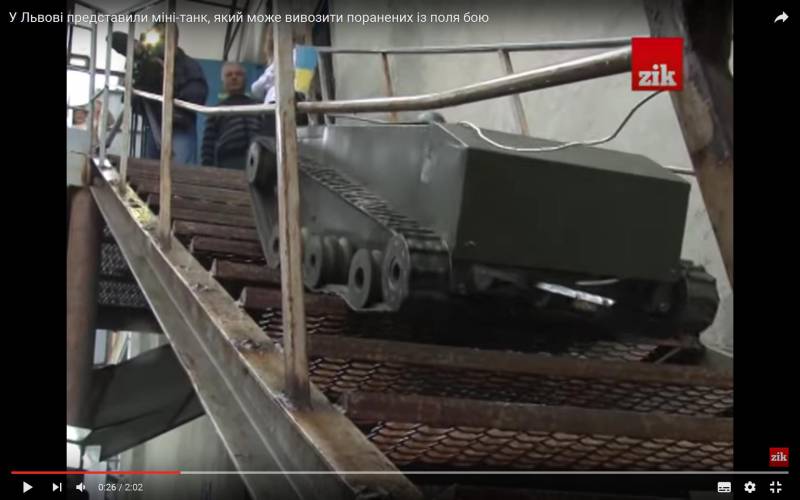 Demonstration of terrain.
The prototype of the robot intelligence climbs the stairs. 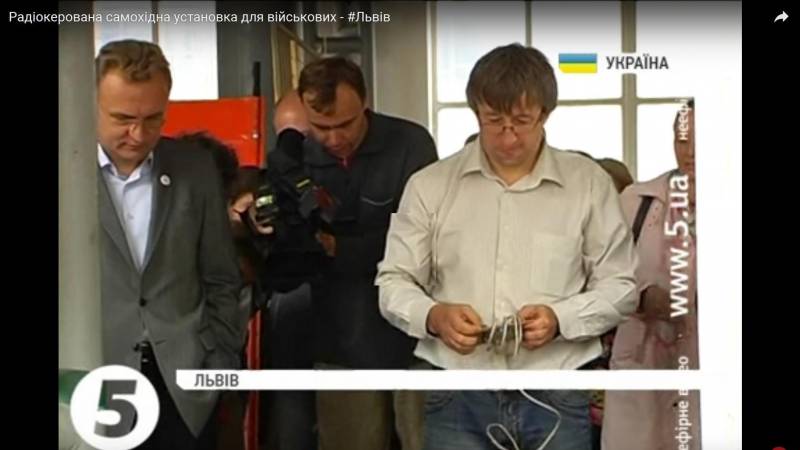 Monsieur Pasechnik shows the mayor of Lviv how his tanchik works.
Pay attention to the control panel in the hands.

Already knowing how the story ends - I want to quote a phrase from the novel “The Twelve Chairs”:
When all passes were issued and the light was reduced in the lobby, Yakov Menelaevich remembered: these clear eyes, he saw this confident look in Taganskaya prison in the 1922 year, when he himself sat there for a trifling matter.

In Lviv, presented a mini-tank, which can remove the wounded from the battlefield.