Sergey Vasiliev: We have a tradition in the EU. Once a century, my friends and I gather in the Reich and climb into the bear den ... 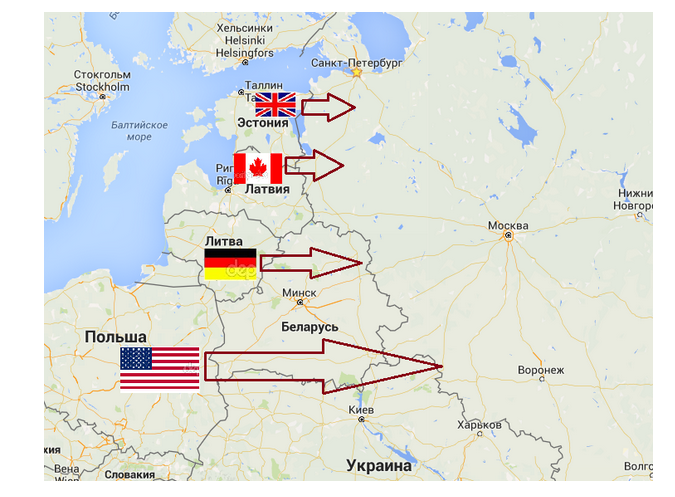 Well, the next summit of the next Reich (crossed out) of NATO ended. The Baltic states and Poland were divided into occupation (crossed out) democratic zones. Canada went to Latvia, Lithuania - Germany, Estonia - Britain, but well, Poland decided to personally occupy (crossed out) the Empire of Good. At the same time, the forces of the Empire of Good are legally removed from the jurisdiction of the host country, thus freeing themselves from any responsibility for their actions - strictly in accordance with the passionate speech of Adolf Aloizych:
"I release people from the burdening limitations of reason, from the dirty and humiliating self-torture of the chimera, called conscience and morality, and from claims to freedom and personal independence, to which only a few grow up ..."

"The decisions of NATO are a powerful signal for Russia", - such diverse and at the same time so predictable "pigeons of democracy" screamed"

Canada, which had not fought 100 for years in Europe, and never even on its territory, with the face of its Prime Minister Trudeau, decided to demonstrate full and absolute enthusiasm for leading NATO forces in the central direction of defense against "Russian aggression", which is now taking on a complete configuration:

1) Britain with Estonian wagon train intends to defend against aggressive Russians in the general direction of St. Petersburg and Veliky Novgorod.

3) Germany will guard the rest of the NATO countries in the direction of Minsk-Smolensk-Vyazma for one simple reason - they already went there and everyone knows (it is quite possible that the French can connect to the same direction - they have there, on the Berezina, too left unfinished business ...)

4) The Empire of Good is located closer to the Black Sea coast, for where is it without the Navy ... and the vassals who can be sent to "defend the borders of NATO" in this region are a dime a dozen. Here, ukry, Turks, Romanian-Moldovans, and rushing to protect NATO "bratushki", and Hungarians, who have some business left at Stalingrad ... well, since the protruding ukry were already talking about the "offensive frontiers of NATO, then we can only repeat the territories behind them, which must be “protected from the treacherous Russians” - wow, these are huge territories - from the Crimea-Krasnodar-Voronezh to the Caucasus and further to Ufa, Tyumen, and Surgut from Nizhnevartovsk ....

In a word, nothing new - NATO is going to defend and defend itself against Russia in the same way as it defended itself and fell all the previous time. Simply, it (NATO) was called differently then - the Teutonic Order, Rzeczpospolita, the Kingdom of Sweden, the French and then the British Empire, the 3 Reich ... In a word, we have a tradition with our friends - once in a century we are all in the EU Reich, and climb into the den to the bear chorus ...

"I release people from the burdensome limitations of reason, from dirty and humiliating self-punishment of the chimera, called conscience and morality, and from claims to freedom and personal independence, to which only a few grow up!"... according to G. Rauschning, who quoted this statement (from an interview with Hitler on 1934) in the book Voice of Destruction: Hitler Says, 1940

Ctrl Enter
Noticed oshЫbku Highlight text and press. Ctrl + Enter
We are
On the other side of the “red” and “white”. Izborsk Club ReportThe occupation of the Slavic world is carried out according to plan.
Military Reviewin Yandex News
Military Reviewin Google News
204 comments
Ad