July 14 2016
32
On the eve of his speech at the UN Security Council meeting, Russian Permanent Representative Vitaly Churkin called on the "partners" to move from words to action on countering international terrorism. It was about the problems of the Syrian conflict, and Vitaly Churkin, in order not to give rise to double interpretations by the Western media, noted that all participants in the counter-terrorism campaign should objectively assess the situation in Syria.


At the same time, the Russian permanent representative made it clear that Russia will not refuse to support the current Syrian authorities, if only because the Syrian authorities, unlike all kinds of "opposition coordination councils" and other organizations that are fed from outside, are not only a legitimate institution, but also a political force tuned to combat terrorist scum.

An important part of the speech of Vitaly Churkin in the UN Security Council is his words that, until now, the “partners”, to put it mildly, look without much enthusiasm to cut the main source of the existence of terrorist groups in Syria - financing and supplying weapons.

According to Vitaly Churkin, in the area of ​​blocking the channels of financing terrorist groups and supplying them weapons "There are gaps."
Permanent Representative of the Russian Federation in the UN Security Council quotes the news agency Interfax:
They (gaps) allow militants to move across borders, to receive money, weapons and material means, access to chemical warfare agents. This must end. (...) Much will depend on whether the opponents of Damascus refuse from the destructive line postponing the peaceful denouement. Russia expects American partners, as well as influential regional players, to have a more energetic, and most importantly, a positive line. The negotiation process in Geneva should be resumed as soon as possible.

Talking about the problems of the Geneva negotiation process in the current situation does not look idle. In fact, the situation has obviously come down to the fact that the so-called opposition (moderate, sometimes moderate and not quite moderate) simply received an unequivocal task from their puppeteers to disrupt any negotiations. Why? Yes, everything is just really. After all, any negotiations must end with the adoption of a "compromise" decision. And are those who brewed thick porridge of the Syrian conflict interested in solving the Syrian issue on a compromise basis, for example, with Russia? The question is rather rhetorical ...

Thus, in the course of previous negotiations, de jure, as it were, it was possible to reach an agreement that armed groups should lay down their arms - once, dissociate themselves from the groups recognized by the UN Security Council as terrorist - two, go into a regime of political discussion of Syrian problems - three. And at the initial stage, the process seemed to be going quite actively. The Russian focal point for reconciliation in Syria reported daily on the withdrawal of weapons and the transition to a political dialogue of dozens of groups in various provinces of the country. However, a few months after the start of such a process, the moderation limit in Syria was apparently exhausted, and Dzhebhat al-Nusra, ISIS, Ahrar ash-Sham and other “bearded boys” began to redouble their strength. the activity of the Russian Aerospace Forces and the Syrian government army were lost.

Thus, the militants during the “truce” (what an interesting word for the Syrian weekdays ...) almost completely regained control over previously lost areas in the north of the provinces of Lattakia, Idlib and Aleppo, intensified their activities in the provinces of Suweida and Daraa, some areas inflicting severe damage to the Syrian government army. If you look at the map of the location of these Syrian provinces, then you can see that the first three border with Turkey, and the rest (of those mentioned above) with Jordan. 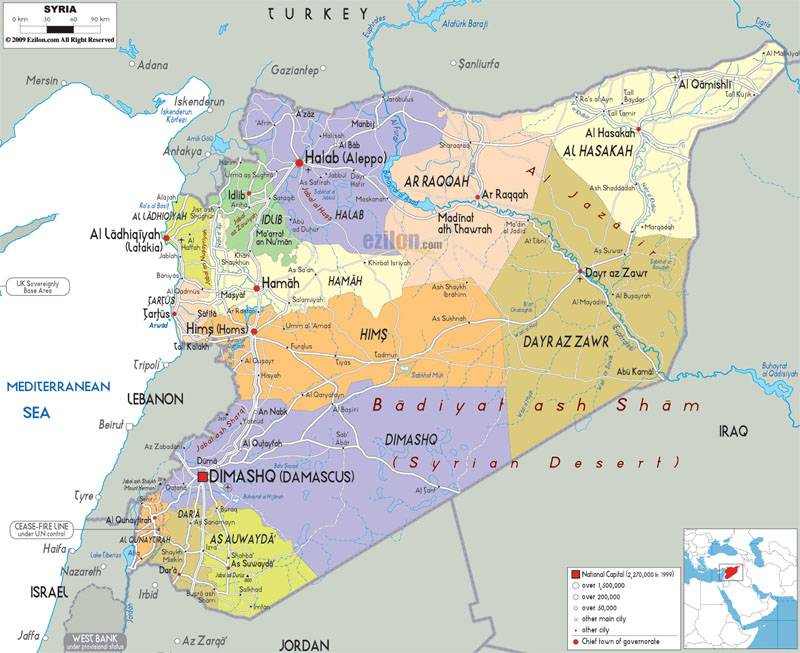 The conclusion as to why the main forces of the militants throw precisely on these territories, suggests itself: keeping the border areas under their control for the militants is a strategically important task. So important that if the militants fail to cope with its execution, their days will be numbered. While successfully cope ...

Arms flows, transport, financing go through cross-border corridors, providing not only the survival of terrorist groups, but also their ability to actively resist, no less, the regular army - the Syrian government forces, which have not only their own ground forces, but also some no - aviation. And given the fact that the Syrian government’s army also receives support from the Russian Armed Forces, we can only guess who constitutes the ranks of international terrorist groups and how large-scale their support from individual foreign countries is.

The facts are that the countries bordering Syria (the same Turkey and Jordan), declaring truly phenomenal commitment to the fight against international terrorism, not only do not overlap the borders with Syria, but often themselves are actively involved in providing armed groups located on the territory of the SAR. History with Turkish special services, sending weapons to vans to Syria, published by Turkish journalists, is well known. As is known (already from the American media) and the story of how the Jordanian special services conducted (only in the past tense?) A certain kind of trade relations with representatives of the Syrian armed groups.

Now a simple question: how much would the same “Nusra” hold out if Turkey really closed the border with Syria? But at the moment, the “Sultan Erdogan’s” patrimonial estate, which has been trimmed with tomatoes, overlaps the border in this kind of filtration regime, letting armed groups into its territory at a time when they are fairly “stuffed” by detachments of the Syrian government army in the north of Latakia, Idlib and Aleppo. As soon as they have a rest and are healed, they will get a weapon - again into battle with the aim of recapturing the areas occupied by government forces.

What is the position in all this history is one of the key players on the Syrian issue - the United States? Judging by what is happening now, the United States is simply delaying the adoption of real measures at the end of this year — the beginning of next year, when the results of the presidential election will be announced in the States. Obama has lately been more concerned about preserving his own image (if there is anything at all about what to preserve) and is taking obviously populist steps, for example, about the hypothetical ban on nuclear testing.

The United States, and it is becoming more and more obvious, does not and there was no other idea on Syria, except the idea of ​​the displacement of Bashar al-Assad. After not without the help of the Russian Federation, the "friends of Syria" about Assad broke their teeth, there is a process of "dental prosthetics" in order to try again to crack the "Assad nuts" ... While the process of "prosthetics" is going, they are releasing, excuse me, shafok from the Syrian pseudo-opposition that something there yelps about the unwillingness to return to the negotiating table before fulfilling their next - stop - requirements. Restoring their teeth pull time, while quietly continuing to finance terrorism.

This was actually stated by Vitaly Churkin. After all, if the same American system claims that it can track the movement of any dollar in the anti-corruption format, then why has the American system still not provided information about which financial structures are used to feed the terrorist conglomerate in Syria, which offices consolidate the required for the livelihood and combat readiness of terrorists cash funds?

There is an opinion that soon there will still be a person who will publish the routes of pumping Syrian militants with finances, even if the American administration is trying to block such publication. Although it is unlikely that there will be anything sensational on these routes, considering who and how financed the birth of the Taliban and all Al-Qaida in due time for the realization of Western interests in the Middle East and Central Asia ...