Angela Merkel and her Russian desires

July 14 2016
28
Central and regional Russian media vying quote Angela Merkel. Frau Chancellor wanted to strive for the lifting of sanctions against Russia and for "good relations" with her. Where did such an interesting desire come from? The point is probably safe. “Security in Europe can only be ensured with Russia,” Merkel noted earlier, speaking in the Bundestag. Other Russian experts consider Merkel's speech about “good relations” as typical Western slyness, others as electoral idle talk. 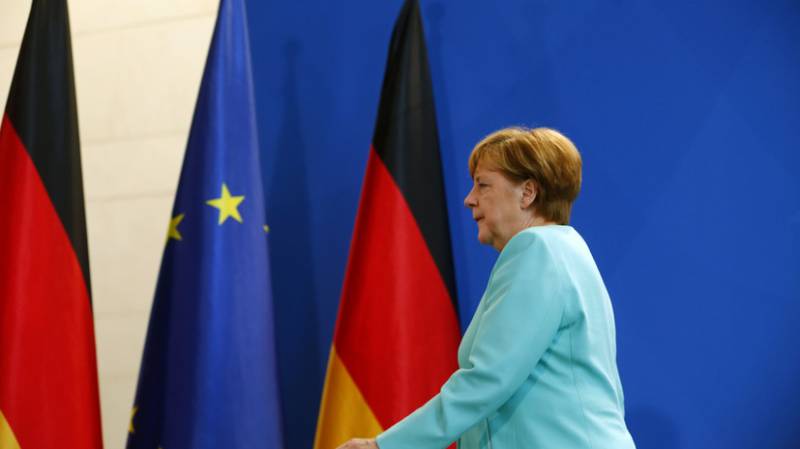 Recall that in late June, Frau Merkel stated that the extension of sanctions against Russia is linked in Europe with the promotion of the implementation of the Minsk agreements relating to Ukraine. Other leading European politicians interpreted the same thing when it came to sanctions against Moscow. Interpreted separately and a duet with Frau Chancellor, where she certainly set the tone. For example, the June meeting of Merkel with Francois Hollande is known, after which the lady from Germany said that "the extension of sanctions against the Russian Federation is necessary." Some people from Hungary, Italy and from a couple of other places grumbled over anti-Russian sanctions, but then they bowed to the bosses from the EU and acted on their orders. There could be no other way in the “united Europe”. Something else is possible only on the model of Britain splitting off from the EU (however, it is by no means against anti-Russian sanctions and with the West in this matter is absolutely the same).

We also recall that the EU Council recently extended sectoral sanctions against the Russian Federation by 6 months, from July 31 to January 31, 2017. Merkel herself at the time of the extension explained that such a decision, “unfortunately, is necessary,” since the cease-fire agreement in eastern Ukraine is not being implemented.

Suddenly, speaking at July 11 at an event organized by the Christian Democratic Union in Zingst commune, Frau Merkel expressed her commitment to reaching an agreement between the European Union and Moscow. The agreement, which was discussed, would allow the lifting of economic sanctions against Russia. Frau Merkel wants "good relations with Russia"! And she is not alone. Many, it turns out, they want.

"We all want good relations with Russia," - quoted the German Chancellor TASS with reference to Bloomberg.

According to Merkel, many would like to lift the sanctions from Russia. “I myself would like to,” she admitted.

As for the Minsk agreements mentioned above, Frau Merkel stressed that in this direction she is “intensively working to achieve progress”. There was a bit of specifics: “But we also want Ukrainians to get access to their border again. That is why I expect all parties to compromise. ”

As for the Russian position, then, as TASS recalls, Russian Foreign Minister Sergey Lavrov repeatedly voiced it. According to him, the issue of the transfer of control over the border between the Russian Federation and Ukraine will not be resolved until the implementation of the anticipating points of the Minsk agreements: “Ukrainians want this all the time. But they were repeatedly explained that, as long as there is no amnesty, a law on special status, which will really guarantee additional rights to these territories, as long as these rights are not permanently enshrined in the Constitution of Ukraine on a permanent basis, it is difficult to count on the fact that Donetsk and Lugansk agree in advance to fulfill what the Minsk agreements should complete the political process, and not be its precondition. ”

Where did Merkel make such statements, which for the last two years have shown utter intractability in relations with Russia?

Probably, the German leader is focusing on the issue of security. Security of Germany and security of all Europe.

Speaking in the Bundestag on the eve of the NATO summit, the German chancellor urged not to close the door to cooperation with Russia. According to her, security on the continent in the long term can only be achieved in cooperation with Moscow.

"We believe that security in Europe for the long term can only be ensured with Russia, but not contrary to it," the newspaper quoted Merkel as saying. Kommersant.

The future security architecture, in the opinion of the Frau Chancellor, should be discussed at the Russia-NATO Council. She added that “she is extremely interested in constructive relations with Moscow,” and urged not to close political communication channels with Russia.

At the same time, Merkel expressed satisfaction with the progress in strengthening NATO's potential, and called plans to create an European missile defense system “an important step in protecting people in the alliance space.” In her opinion, this system is not directed against Russia.

Some Russian experts talk about the slyness of the West, which manifests itself when it comes to Europe about sanctions against Moscow.

“The assurances of the leaders of the countries of the European Union that the main dream of their life is, let's say, overcoming hunger in Africa and restoring partnership relations with Russia, seem very crafty,” said "Free Press" political analyst of the international monitoring organization CIS-EMO Stanislav Byshok. “At least for the reason that one of these cherished ideas can be implemented very quickly and even completely free.”

“Slyness towards anti-Russian sanctions, unfortunately, manifest not only openly unfriendly leaders towards our country, but also those who are considered“ friends of Russia ”and even criticized for such“ friendship ”by some of their colleagues, as well as the Brussels bureaucracy” - reminded the expert.

As for Merkel’s specific statement, the analyst believes that it should be considered as part of an electoral strategy when people are told what they want to hear. “In East Germany, they are more sympathetic to Russia, so the Chancellor made such a nod. Nothing serious, just words, ”concluded the expert.

The senior lecturer of the department of foreign regional studies and foreign policy at the IAI of the RSUH, Vadim Trukhachev, said in a statement to Frau Merkel “maneuvering”: “I would like to take it off” and “take it off” are two different things, ”he said. - The German Chancellor is forced to maneuver between different groups of influence within his own party, some of which insist on lifting the sanctions, others on their preservation. She also outlined the conditions when the restrictions will be removed: when Ukraine will gain control over the border. That is, until Russia pushes DPR and LNR in such a way that they themselves cut off from Russia and surrender to the battalions of the Azov, Donbass and their ilk. In fact, this means that as long as Merkel remains Chancellor of Germany, the European Union will not remove any restrictions from Russia. And “I would like to take it off” - just a beautiful figure of speech, so that members of the same party who disagree with it would not swear and grumble. ”

Nevertheless, we add, having told about her “wants”, Angela Merkel made a rather unusual statement. Unusually it is no longer only because Merkel has recently spoken quite harshly against “aggressive” Russia, but also because there are no positive changes in the Ukrainian situation.

In fact, the position of the Frau Chancellor began to converge with the position of German Foreign Minister Frank-Walter Steinmeier, who repeatedly stated the possibility of a phased lifting of sanctions (if progress is made to resolve the conflict in Donbas). He recently noted that "no one is interested in the economic destruction of Russia." However, it’s very far from words to business.

Both Merkel and Steinmeier, behind whose backs are disgruntled German businessmen who want to fully cooperate with the Russians, did not give a finger to stop the cold war and go against the will of the overseas hegemon. It’s naive to think that Frau Merkel is being stopped by the Ukrainian situation. The vector of the so-called unity of the West is decisive in its political behavior. It is worth at least someone to break away, renounce the common "sanctions" position - and the praised unity will crumble.