July 13 2016
85
The Russian Volga-Dnepr group of companies and its subsidiary AirBridgeCargo (AirBridgeCargo Airlines) are close to signing a firm contract for the purchase of American cargo aircraft Boeing 747-8F. This large-scale transaction raises many questions. 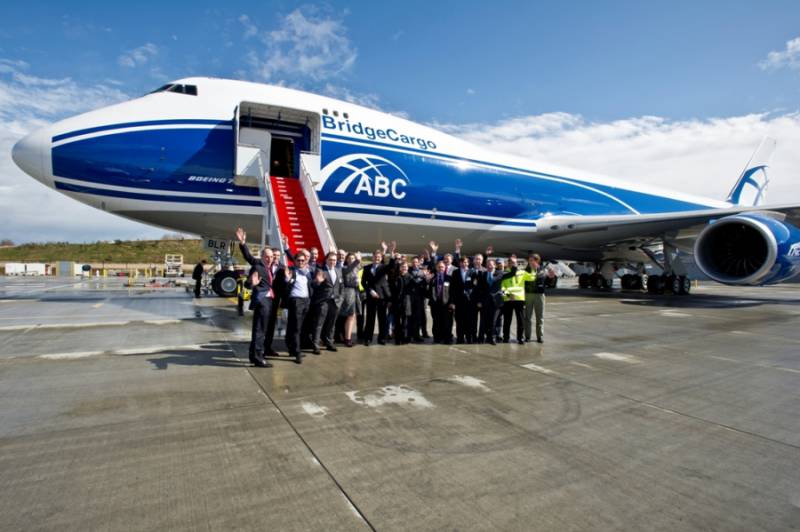 Recall that in June last year, Volga-Dnepr Group signed a memorandum of understanding with the American corporation Boeing on the acquisition of 20 cargo aircraft Boeing 747-8F of the new building at the international aerospace show in Le Bourget (France). In the framework of these agreements, the Russian airline already received two cars in November last year. In March, 2016, the Boeing received a firm order for two more aircraft. At the end of June of this year, the American Bloomberg agency announced that AirBridgeCargo Airlines, Volga-Dnepr and the American aerospace concern Boeing are close to concluding a firm contract for the supply of at least ten new Boeing 747-8 Freighter cargo aircraft.

According to the agency, the contract will be signed during the international aerospace salon in the British Farnborough, which starts 11 on July 2016 of the year (An-124-100 and Boeing 747-8F aircraft of the Volga-Dnepr group will be presented at the ground exhibition). The catalog price of a dozen Boeing planes purchased by Volga-Dnepr is close to 4 billion. Bloomberg stresses that the order from a Russian airline will keep Boeing 747-8F in production over the next few years - in the face of tough competition from more economical ones. two-engine cars four-engine "Jumbo" are experiencing big problems with the search for new buyers. 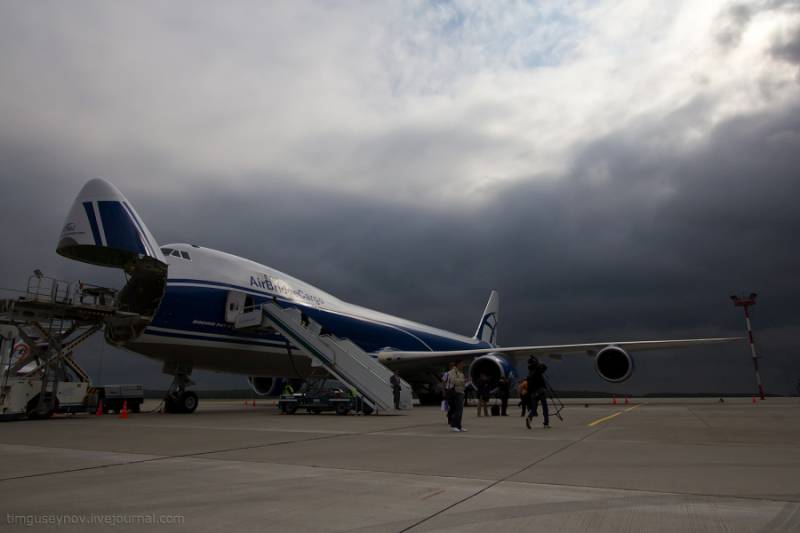 It draws attention to the extremely risky nature of the transaction for the Russian participant. Note the strangeness of this transaction and the issues arising in its connection.

1) Why is the production of an American aircraft generally saved by a Russian airline, and not, say, an American, or at least a Middle Eastern or East Asian? Maybe the new 747 are considered unpromising investment of funds?

2) Why does Volga-Dnepr go to such large-scale purchases of aircraft right now? If AirBridgeCargo purchases all the 20 new Boeing 747 according to the memorandum of intent, it will mean a doubling of the fleet of these cars of the Russian airline and a threefold increase in its fleet of 747-8F aircraft. At the same time, no abrupt growth in the air cargo market is expected. The market is close to stagnation, and a slight increase in cargo turnover is absorbed by the cargo compartments of passenger wide-bodied aircraft. Modern passenger twin-engine Boeing 777 or Airbus A350 even with a full load of passenger seats take on board the 25-30 tons of cargo. Logistics companies charter these facilities, which is why specialized cargo aircraft (and their niche airlines) are losing the market. The Volga-Dnepr Group itself, in addition to being forced to compete heavily in the regular transport market, is experiencing problems in the market for the transport of oversized cargo, its traditional homeland. Under these conditions, the timing of expansion and mass purchases of new aircraft selected by its management is incomprehensible. 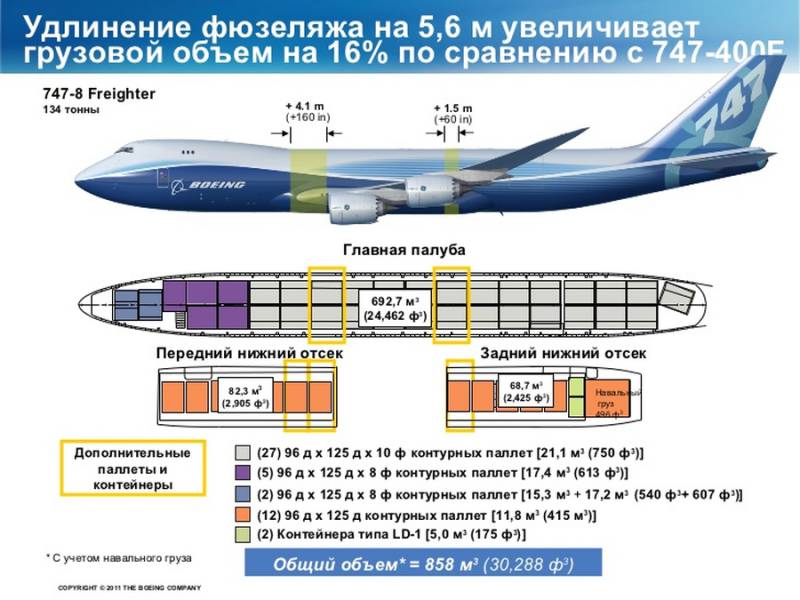 3) How will the transaction be financed? Four (or 3,5 with discounts) billion dollars in the catalog price of a dozen 747-8F purchased is the turnover of the Volga-Dnepr group of companies over several years or its profit over decades of work. It is clear that we are talking about leasing and a long-term loan secured by new and existing airlines, including the American Boeing 747 subsidiary AirBridgeCargo and An-124-100 Volga-Dnepr itself.

4) Is it then right to understand that in the event of financial difficulties for Volga-Dnepr Group and the bankruptcy of the group, its entire fleet of Ruslans (and half of the entire Russian fleet of these vehicles) will go to American creditors?

5) Does the transaction not pose a threat to the national security of Russia? After all, An-124-100 “Volga-Dnepr” together with “Ruslans” of the Ministry of Defense of Russia is a tool to ensure the strategic and operational mobility of the Armed Forces of Russia.

In general, the transaction is extremely risky and rational arguments in its favor at first glance are not visible.

Therefore, allow yourself a hypothesis.

The new Boeing 747-8F, discussed in the Bloomberg article, will not be the first cars of this type purchased by Volga-Dnepr. For the first time, five Russian new Boeing-747-8F aircraft purchased the 2007 of the year for their subsidiary AirBridgeCargo.

Recall the circumstances of the transaction. In 2005, a commission led by former US Federal Reserve Chairman Paul Walker conducted an investigation into the abuse of the oil-for-food program, the largest stories a financial project of the UN (the program allowed Iraq to sell oil on the world market in exchange for food and medicine, all oil was worth about $ 65 billion dollars). The commission found evidence that a Russian citizen, Alexander Yakovlev, who was responsible for procurement at the UN Secretariat, took bribes from companies that later received UN contracts. In the same year, in a federal district court in New York, Yakovlev pleaded guilty to taking bribes and laundering money and was arrested. Yakovlev testified against Vladimir Kuznetsov, Chairman of the Advisory Committee on Administrative and Budgetary Questions of the UN General Assembly.

In March 2007, a New York jury found Kuznetsov guilty of conspiracy to launder money. According to FOX News, Yakovlev provided consulting services to Volga-Dnepr, which allowed the latter to win UN tenders. Part of the funds received, according to the investigation, Yakovlev laundered using Kuznetsov-owned offshore bank accounts. As a result, the United Nations suspended relations with Volga-Dnepr Airlines, while Yakovlev and Kuznetsov were threatened with decades of imprisonment. According to some reports, there was a possibility of issuing an arrest warrant for Alexei Isaikin himself, the president of the Volga-Dnepr group. 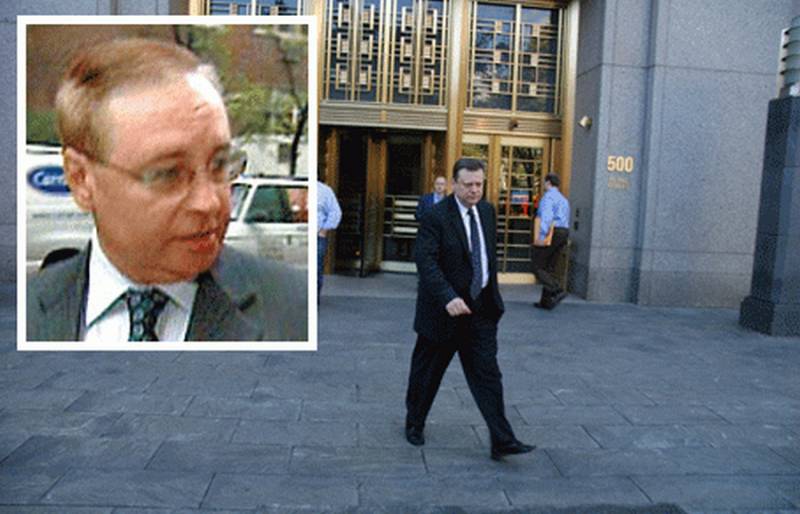 And then came the purchase of the very first five Boeing-747-8F for AirBridgeCargo. After that, the pressure of the American justice system on these Russian citizens abruptly slept. Vladimir Kuznetsov was extradited to Russia and soon released. In 2010, Yakovlev was sentenced to several hours (yes, hours) of imprisonment and two-year public oversight, while agreeing to give the US 900 thousands of dollars from his accounts in Liechtenstein Bank. As for Volga-Dnepr, the company soon returned to the fulfillment of UN orders, moreover, the joint venture of the group with the Ukrainian state-owned enterprise Antonov Ruslan SALIS GmbH received a renewal of the NATO-Vst contract for strategic transportation in the interests of the North Atlantic alliance. In general, it looks as if the acquisition of five 747-8F "Volga-Dnepr" then was able to pay off from the Americans. 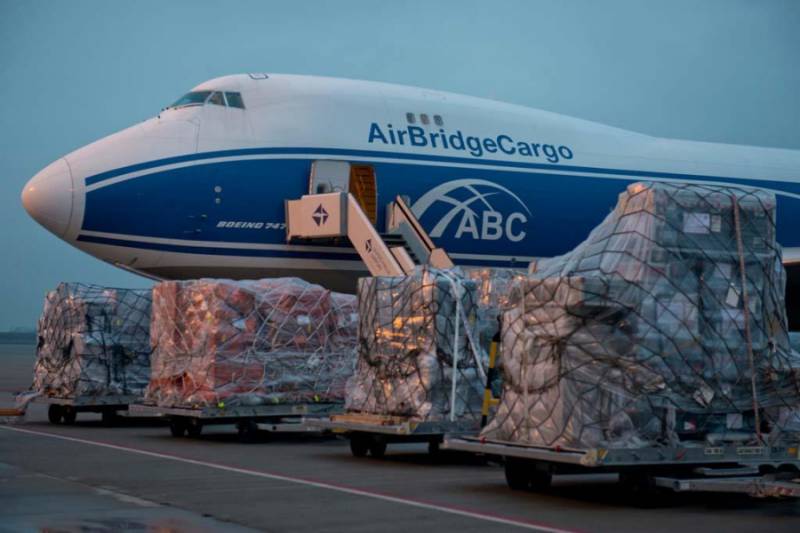 It takes several years. US-Russian relations are deteriorating sharply due to the Ukrainian and protracted Syrian crisis. In addition, the United States withdrew troops from Iraq and curtailed its military presence in Afghanistan, as a result, the volume of transportation of equipment and, accordingly, the volume of orders for Volga-Dnepr with its Ruslans, decreased. Next is our guess. Under these conditions, the Russian company is no longer needed by the Americans and they put a condition - either you buy from us a large batch of Boeing-747-8F on credit under appropriate conditions, saving the production of this car, or we cover you with sanctions. Based on, let's say, Volga-Dnepr regularly transports cargoes of Rosoboronexport, sanctions against which were recently extended once again by the United States. In any case, it would be easy for Americans to throw a Russian company out of its own air transport market, which is fatal for a subsidiary of AirBridgeCargo, the formal recipient of these Boeing-747-8F, as the North American market accounts for up to a third of its turnover. 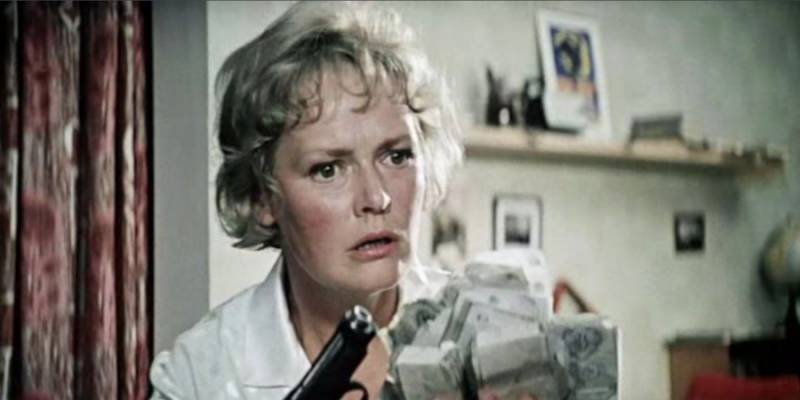 “Maybe he was tortured there ?!” (c) Still from the film “The Diamond Arm”

However, perhaps the initiative to buy Boeings really came from the management of the Russian company: people smelled what was going on, and offered the Americans a deal, like last time, only on a larger scale. The expectation is that the United States will not impose sanctions on the airline that saved the production of the American aircraft. In any case, the risks for the American side are small. "Boeing" in which case they will remain, plus the Americans are able to hang on a large and long loan company, which determines the strategic mobility of the armed forces of the potential enemy. Agree, if our assumption is correct, then many questions about the economic feasibility of the transaction for the purchase of a large batch of 747-8 disappear. However, all the risks of this purchase for the Russian participant remain. And the risk of losing the best part of the park "Ruslan" for Russia, too. 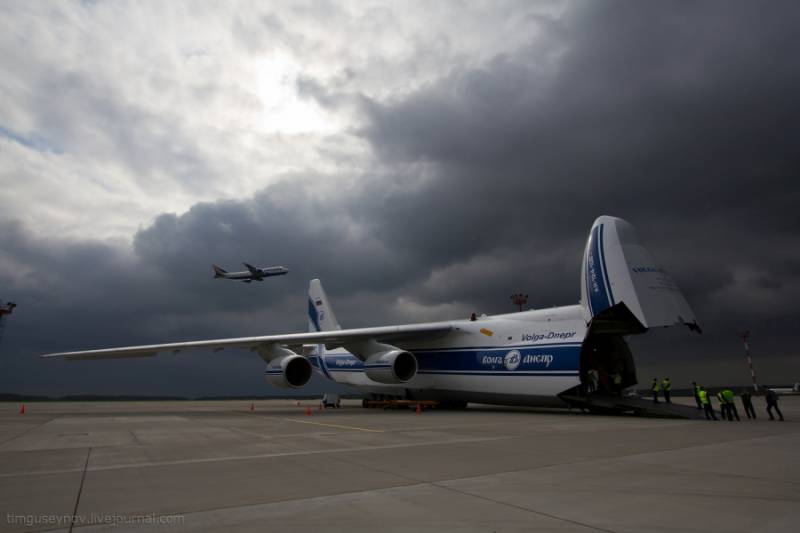 Now the question "what to do?"

Well, firstly, once again to learn from the superpower to defend their national interests and the interests of their industry by any means.

Secondly, to recommend to our Ministry of Defense and the leadership of Volga-Dnepr to look for compromise options on the question of the purchase of An-124-100 by the military department. We know that the military need these machines. After all, in view of the cancellation of plans to resume production of Ruslans, it will take a long time for our VKS to wait for a new heavy military transport aircraft. 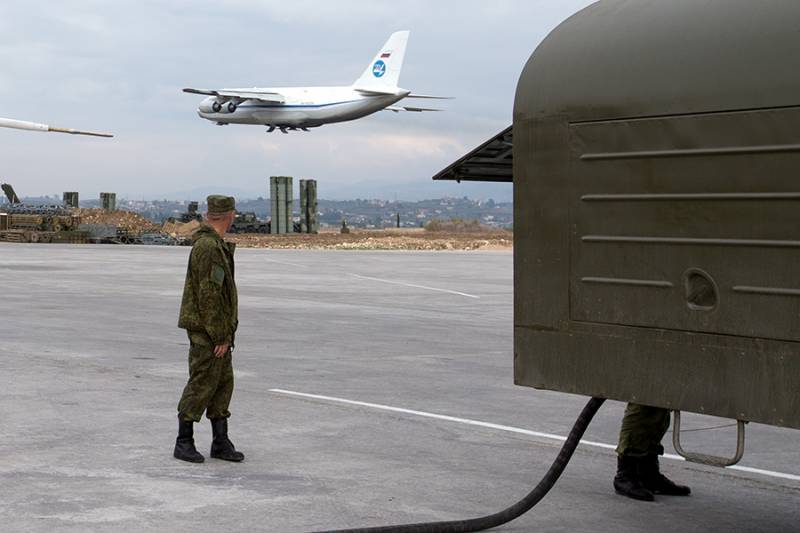 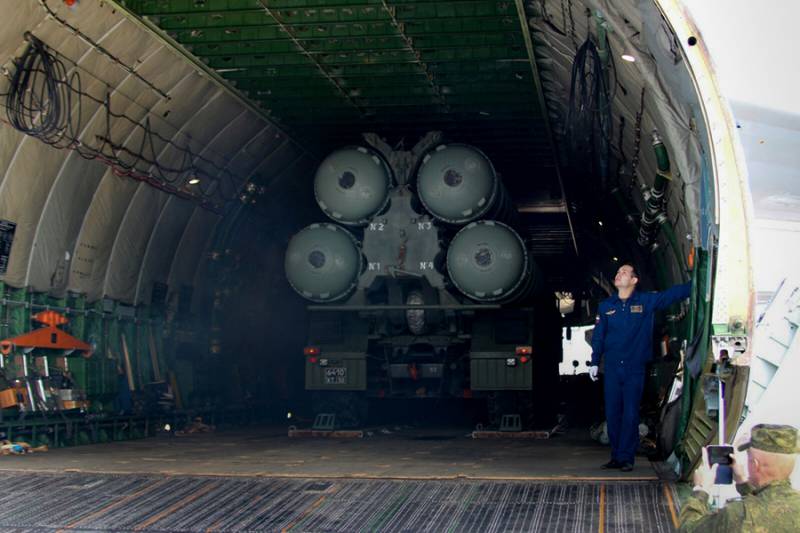 An-124 transport aircraft “Ruslan” of the Russian Aerospace Force of the Russian Federation has just delivered a C-400 air defense system to the Hamim base in Syria (c) saidpvo.livejournal.com