July 13 2016
46
The Washington Post newspaper reported that Barack H. Obama allegedly was ready to offer Russia to extend the START-3 agreement to 2026. The Kremlin, however, said they did not receive proposals from the White House to extend the contract. Some Russian military experts say that Moscow could extend START-3 subject to the second side of a number of conditions, other analysts strongly oppose the prolongation. 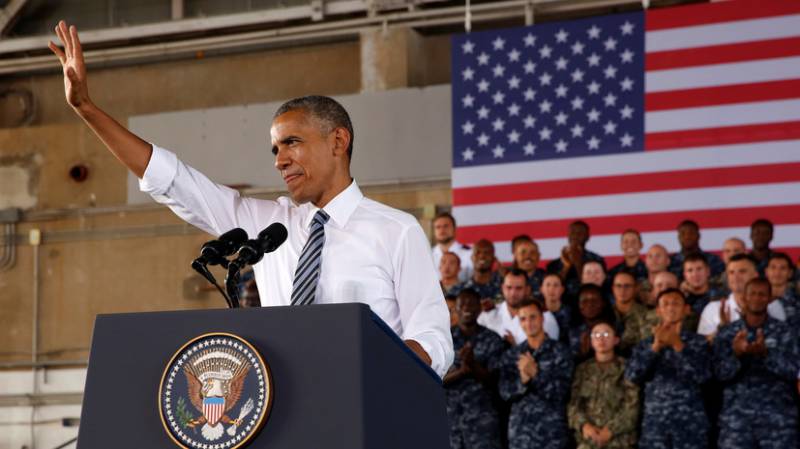 Recall the agreement between the Russian Federation and the United States on measures to further reduce and limit strategic offensive arms, abbreviated as START-3 or START-III, was signed by Presidents D. Medvedev and B. Obama 8 on April 2010. The Act entered into force on February 5 2011 .

START-3 is designed for ten years with a possible extension for another five years by agreement of the parties.

From the material Washington Post 11 July became aware of the intentions of Barack Obama to make a number of major changes in US nuclear policy.

The Washington Post refers to high-ranking informed sources at the White House. These people report on the upcoming historic announcement of the White House: that the United States is no longer going to use nuclear weapons. weapon the first.

Moreover, the administration of the peacemaker B.H. Obama decided to initiate, for his part, the adoption of a UN Security Council resolution banning nuclear testing.

Separately touched upon and the Russian theme. Obama proposes to offer Moscow to extend to 2026 of the year (that is, another five years plus the current term) of the START-3 treaty.

But this is not all: some US officials went further than Obama and spoke in favor of stopping the development of long-range cruise missiles (intended for a limited nuclear strike).

Finally, the material and financial issue. Without him, of course, not done. The White House administration plans to cut spending on modernizing nuclear weapons. If you do not reduce, then the mentioned modernization will require from the US 350 billion dollars in expenses over the next ten years.

The newspaper notes that the administration’s proposals are still proposals: none of them have been approved.

Of course, congressional Republicans were outraged by such peacemaking of the president. The main argument of the "hawks": they say, you can not use the remaining months of sitting in the Oval Office to weaken the nuclear potential of the Motherland! Yes, and the allies will be unhappy.

The Kremlin has not yet received notifications from the United States about the proposals of Barack Obama to extend the treaty on the reduction of offensive weapons, signed in 2010 year. On this 11 July said the press secretary of the President of Russia Dmitry Peskov.

B. H. Obama's unapproved proposals provoked a storm of discussions in the Russian expert community.

Some military experts believe that Russia will go on renewing the START-3 agreement only if the United States fulfills a number of conditions. For example, Igor Korotchenko, a member of the Public Council under the Ministry of Defense, editor-in-chief of the National Defense magazine, said RIA News"that the Kremlin will go on extending the treaty only if Washington meets a number of requirements, including refusing to deploy missile defense systems near the borders of Russia.

“Negotiations on the further reduction of nuclear arsenals will be conducted by Moscow in the implementation of the three most important points. The first point: the complete withdrawal of American tactical nuclear weapons from Europe to the United States. Second, during negotiations, a total credit of the nuclear potentials of the United States, Great Britain and France is needed on the one hand, and the Russian Federation on the other. The third point is that Americans must sign a legally binding agreement on limiting the deployment of their missile defense systems that affect the global strategic balance, ”Korotchenko news agency quoted.

According to the expert, if the United States refuses to fulfill the above points, there can be no talk of Russia’s reduction of its nuclear potential.

In addition, it should be taken into account, the expert noted, that the value of nuclear weapons for Washington has steadily decreased in recent decades. This is due to the fact that new high-precision systems in non-nuclear equipment are being put into service.

“In no case can we extend the START-3 agreement now,” stated categorically "Free Press" Leading expert at the Center for Military-Political Studies MGIMO Mikhail Alexandrov. “All these are tales that Obama wants to help his successor.” In fact, there are serious issues of American military planning and construction. Due to the exacerbation of the military-political situation, the Americans do not know what types of weapons they should build up. If we extend the treaty today, then Washington will know about our refusal to produce additional strategic nuclear weapons. Then the United States will continue to quietly build up its missile defense system. ”

The expert believes that if there is a prospect for Russia to increase offensive forces, then the idea of ​​building a missile defense system will "go bankrupt": after all, missile defense "is now ineffective, but new types of missiles that are planned to be delivered by the 2021 year will change the situation." “If the agreement is extended, then the missile defense system will be effective against a small number of missiles,” the analyst explained. “If we withdraw from the treaty, begin to deploy a large number of missiles, then there will never be enough antimissiles.”

Alexander Perendzhiev, an expert at the Association of Independent Military Political Scientists, suggests that an article in an American newspaper could have been a simple informational injection, designed to get opinions on the initiative.

The question is not whether or not to agree with Obama’s proposed initiatives, but about the specific content of the agreements, the expert believes.

“That is a speech today about what the States can do and what obligations they are ready to take on. But, in my opinion, all their promises will remain unfulfilled. Obama wants everyone to remember how he fought for peace. At the same time, to say that the United States had proposals, and Russia prevented from implementing such good initiatives. ”

“Apparently,” the expert added, “now the work is not even on political, but on historical Obama's image. So that he goes down in history as a peacemaker. Moreover, the descendants will ask why he received the Nobel Peace Prize? ”

Die, add, Obama is not going to. Recently, he was checked by doctors and concluded: healthy as a bull. And the “descendants” will hardly be asked if the Third World War begins.

Presumably, in the recent months Barack Obama has become uncomfortable with the world arms race that has begun. After all, if humanity is on the verge of a global war and remembers something to Mr. President, it is a dangerous “cold” confrontation with Russia, begun by its administration.

It seems that Mr. American President, under the curtain of his political career, really intended to confirm the status of the Nobel peacemaker.

Judge for yourself: by extending the START-3 agreement to 2026 (of course, with the consent of the Kremlin), Obama would create a reserve for the successor, whoever it turned out to be - Hillary Clinton or Donald Trump. If START-3 is prolonged to 2026, the successor president will not have time to change the terms of cooperation with Russia in the field of nuclear weapons during the reign. Even if the double term of “imprisonment” on the throne falls to him, he still does not have time.

In a word, Obama is making another attempt to make history. Maybe the Nobel Committee is dissatisfied with his behavior?