July 13 2016
107
Since July 1 in the economic block of the Ukrainian government began to scratch their heads, considering what to do in response to the Russian measure to limit the transit of Ukrainian goods through the territory of the Russian Federation to Kazakhstan and Kyrgyzstan. Recall that it was 1 in July that Russia decided to introduce additional measures related to the transit of Ukrainian goods through its territory. In fact, such a measure is in the most favored mode, which Russia implements in relation to a number of CIS partners, and Ukraine, although its parliament has not ratified its entry into the CIS since the creation of the community, de jure does not leave the organization.

In other words, Russia has introduced a classic mode of transit service through its territory, taking into account the sanctions measures, which provides for a certain rate of customs duties (and there are still goods with zero duty) for a number of goods. The introduction of such a regime is connected with the ratification in Ukraine of an association agreement with the EU. And the fact that as soon as Ukraine ratifies the agreement has already been brought to Kiev on duty-free trade with the Russian Federation (and, in fact, with the Eurasian Union as a whole) he (Kiev) can forget.

Ukraine took the legislative measures of Russia as if it hadn't heard anything about warnings from Moscow. Kiev claims that he agreed with Astana and Bishkek on the payment of import duties for the EAEU, and that in Kazakhstan and Kyrgyzstan payment of duties will take place. Russian customs officers listened and explained that Russian laws are in effect on Russian territory, and that Ukraine can negotiate with anyone, and it is Russia that is obliged to pay for the importation (transit) of goods according to the “most favored nation” tariffs. Moreover, the Ukrainian carriers are trying to transit certain food products, the import of which into the territory of the Russian Federation is completely prohibited (both import and transit), and therefore many Ukrainian trucks cannot enter Russian territory, which Ukraine presents as a violation of WTO rules and regulations. 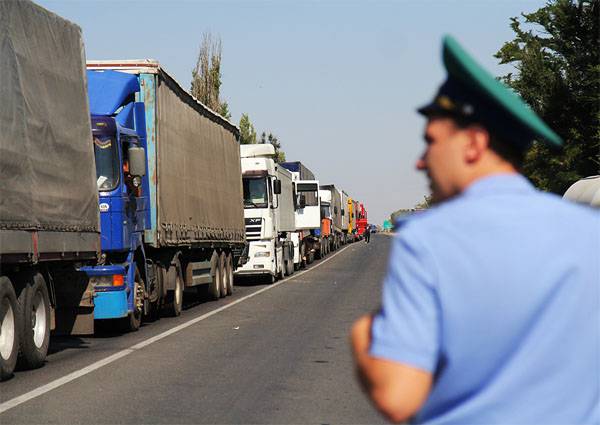 From the statement of the chairman of the Association of Ukrainian confectioners Oleksandr Baldynyuk:
For the pastry chef transit is closed permanently. We have just been informed that the Russians are returning our cars, that they are going to Central Asia.

And Petr Poroshenko was obviously extremely dissatisfied when he learned that his dearness - Roshen candies - was turned back to Russian customs ...

Even here, Russian customs officers calmly explain to Kiev that Ukraine can complain about the issue of WTO rules and regulations even to the WTO, to the Pope, and in Russia it is Russian laws that should be followed, even if you have the last stage of the Maidan of the brain.
A few days later, after Ukraine began reporting significant losses from Russian norms on the transit of goods to Central Asia, the Central Asian partners came to a start. In particular, they began to fuss in the National Chamber of Entrepreneurs (NCE) of Kazakhstan, actually calling on the Kazakh authorities to influence Moscow on the issue of transit of ukrotovarov.

From the statement of the Chairman of the Board of NPP "Atameken" of the Republic of Kazakhstan Dana Zhunusova:
For our part, we regularly notify the business through the official website palata.kz about the current situation, sent information to importers who have signed contracts with Ukrainian counterparties and provided information about existing contracts. The Economic Integration Department organized a hotline for entrepreneurs on the transit of goods from the territory of Ukraine. The main incoming questions concern both the rates of import customs duties and the possibilities of travel. Therefore, once again I want to note that products whose rate is higher than 0% of ETT are prohibited for import into the territory of the Russian Federation.

Against this background, it turned out that Ukraine simply did not want to abide by the rules of transit through Russian territory, trying even to sit down on two chairs after the “revolution of hydraulics”, declaring Russia an aggressor and trying to forgive goods and duty-free through the Russian Federation. Did not work ...

Yes, the Kazakh and Kyrgyz authorities themselves are clearly not eager to "put pressure" on Moscow in order for Russia to trade with Ukraine in the past format. Both Nursultan Nazarbayev and Almazbek Atambayev understand that Russia simply has no other way out, and in general they are not particularly nervous for the simple reason that the Ukrainian “confectionary” in Central Asia easily replaces the “confectionary” from the Russian Federation.

Kazakhstan NPP has to look for options in order to “not offend” Ukrainian partners. The same Dana Zhunusova offers Kiev "to look for alternative routes of supply of Ukrainian goods." As one of such routes (and this is trolling of the 80-level), the Scientific Production Enterprise RK offers “The Silk Road bypassing Russia”. Yes, yes, this is the very “Silk Road”, following which the infamous Ukrainian train first traveled 16 for days traveling across the expanses of Eurasia, twice on the ferries overcoming sea obstacles (the Black and Caspian Sea), and then waited several months for loading on the Kazakhstan-China border but did not wait. So, this route (after a couple of seas) Kazakhstan jokers from the Scientific Production Enterprise propose to follow in terms of sending goods from the territory of Ukraine to Kazakhstan and Kyrgyzstan. 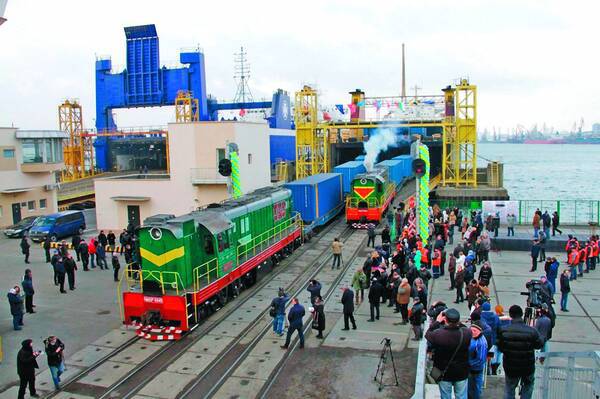 Danu Junusova quotes the portal “Vesti.Ukraina":
Today this question is quite relevant. Yes, we must admit honestly, not everything is smooth on this route, but, nevertheless, the prospects and potential of the route through the Kazakh port of Aktau are quite high. Currently, about 70% of goods from Turkey to Kazakhstan and Kyrgyzstan follow the indicated route. Now we propose to use it for the transportation of goods from Ukraine.

True, Kazakhstan did not say how many ferries would have to be used in order to preserve the volume of Ukrainian imports, and how much such a “silk road” would cost in the end in an attempt to go around the Russian Federation. Roshen sweets somewhere in Astana or Bishkek will bargain along with precious metals ...

Meanwhile, the National Bank of Ukraine is already counting the losses and is looking for something to “answer” Russia. According to representatives of the NBU, Ukrainian exports to Central Asia will decrease by 1,3 billion dollars a year.

If Russian exports to the same Central Asia grow by about the same amount, then this can be considered another unconditional peremog of the Kiev saucepan maidan ...

On July 12, the Ukrainian newspaper Governmental Courier published a decree introducing a retaliatory embargo for Russian goods transiting to the EU and other countries. The whole problem for Ukraine is that Russian goods are not transited through the territory of Ukraine by Russian companies. They are simply outbid by representatives of the Ukrainian business in order to resell more expensive outside the "Square". Does this mean that the decision of the Ukrainian Cabinet will cause an additional blow to the Ukrainian business specializing in such resale? .. Although when this maydanny government cared for such nuances? ..