New atrocities of the Ukrainian aggressors and occupiers 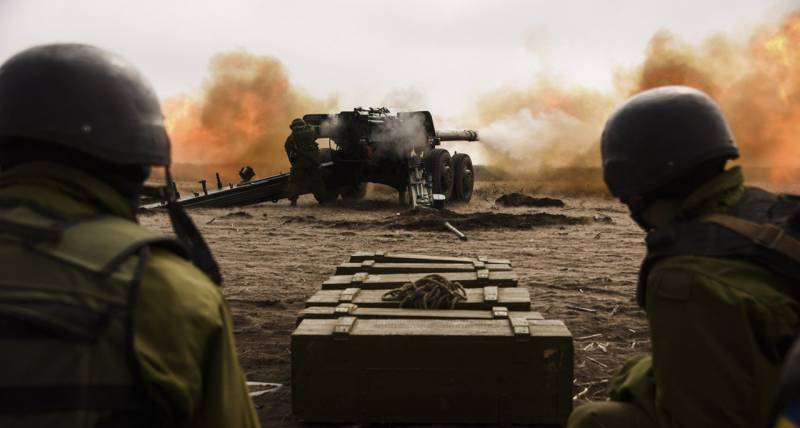 Under the fire of Ukrainian warriors, the long-suffering Gorlovka, as well as the front-line districts of Donetsk and the village in the south of the Republic.

The most intense shelling of the Republic’s territory recently was marked on the night of July 10. In Donetsk, damaged three houses in the Petrovsky district. Much stronger got Gorlovka. In Nikitovsky district of this city 14 houses and the school building suffered.

There are wounded that night among civilians. In the Petrovsky district of Donetsk, a young woman received fragmental wounds to the shoulder and chest. And in the Nikitovsky district of Gorlovka, a woman and two men suffered.

Another area that has been subjected to intensive shelling is Zaytsevo village (the outskirts of Gorlovka). About forty households are damaged there. Fortunately, there were no casualties.

According to the Ministry of Transport of the DPR, as a result of the shelling of Nikitovka station in Gorlovka, a section of railway tracks, a transformer station were damaged, windows in office premises were broken, equipment was damaged.

On the night of July 11, Ukrainian punishers opened fire on populated areas in the south of the DPR — Sakhanka and Novaya Tavriya near Kominternovo. Great damage has been done to the owners of two private houses. In Sakhanka, gas pipelines and power lines were seriously damaged.

The war unleashed by the Maidan junta against the residents of Donbass takes lives in various ways — and this is not only massive shelling that affects front-line areas. A few days ago there was a terrible tragedy in the city of Yenakiyevo, which is now not located right on the front line. But trouble came and there. The children found a grenade on a walk. They brought a dangerous object to the father. He unsuccessfully tried to neutralize the grenade. As a result, three children - a two-year-old girl, five and eleven-year-old boys - died. The head of the family was injured and landed in the hospital. You can, of course, say that the negligent father is to blame, and this will be part of the truth. But nevertheless, first of all, those who arranged this bloody massacre under the guise of an “anti-terrorist operation” are to blame.

Ukrainian media are making every effort to blacken the citizens of the Donetsk People's Republic to the maximum. “Residents of Gorlovka attacked OSCE observers!” - such headlines were on many Ukrainian websites. This is just after an alarming night on July 10, when the brutal punishers of the Kiev regime attacked Nikitovka and Zaitsevo.

The “attack” refers to an attempt by civilians in the shelled areas to talk with observers of an international mission, to talk about their troubles. In their hands they had no weapons. But the OSCE-shnik in response sat in the car and tried to drive away from the scene. Unarmed citizens (mostly women and old people) tried to stop the car, demanding that the observers do their job and record the shelling. “We want to live, children should live! Talk to people! ”Residents said.

Yes, they were emotional because they experienced a terrible night and came across complete indifference. “Crush us! Alone today not finished off, so you finish! ”- shouted women. However, someone's call from the crowd to break the car was answered by “Don't break it.”

Can the incident be called an “attack”? Why, the Ukrainian “lustrations”, which are so loved by representatives of the victorious Maidan, take place in a much more rigid situation: the victims are beaten, humiliated, and their clothes are torn. But such actions are not considered attacks at all, and no one has yet answered them. "People's lustration", they say.

Perhaps such an information campaign (about the “attack” on the observers) is intended to reinforce the insane idea of ​​arming the OSCE mission. Against this categorically Donbass. No wonder in early June, tens of thousands of people came out in Donetsk to protest against an attempt to push such a decision.

Suppose if the observers were armed - would they use weapons in this situation against desperate women and pensioners? Unfortunately, there are cases when the staff of international missions, whose task is to protect the world, really shoot at unarmed people in such situations, at the same time becoming one of the parties to the conflict (the most vivid example is Kosovo and Metohija, from where, when inactive, outright help from the "peacekeepers", hundreds of thousands of Serbs were expelled)

On July 11, the Ukrainian media launched another anti-Donbass and anti-Russian information campaign. They reported on the "seizure of Russian commanders" near the village of Troitskoe in the Popasnyansky district of the Luhansk region.

The enemy claims that three “saboteurs” were taken prisoner, two of whom were citizens of the Russian Federation. The network has a Russian passport of a certain Natan Tsakirov, who died, allegedly from wounds. Then came the video of the second prisoner, allegedly a Russian.

In the DPR deny the veracity of this information. The deputy head of the operational command, Eduard Basurin, said at a briefing: "The Ukrainian military leadership is spreading this false information with the aim of setting the Russian Federation as the aggressor."

Basurin also pointed out that in the ranks of the Ukrainian army there are many foreign mercenaries, which causes dissatisfaction among local residents and the military of the Armed Forces of Ukraine.

It is difficult to say for sure whether it was a citizen of the Russian Federation who was taken prisoner and what actually happened to the second man, whom the Ukrainian media also consider to be a Russian soldier. One thing is clear - from the incident, another informational reason is made to declare Russia an “aggressor”. Although the presence of volunteers from Russia has never been denied, they will again shout about the direct participation of Moscow in the conflict. But the presence of mercenaries in the ranks of the Armed Forces of Ukraine, as well as their terrible crimes, will still turn a blind eye.

Because the real aggressors and the real occupiers are exactly the Ukrainian punishers. And residents of those areas of Donbass, which are still under occupation, are beginning to raise their heads. Recently, Dzerzhinsk (which the junta renamed into Toretsk) opposed the punishers. The people in this city held a protest rally, tried to block the road with the dill military equipment.

In response, reprisals followed. Two organizers of the rally arrested. Pavel Zhebrivsky, chairman of the so-called “Donetsk Regional State Civil-Military Administration”, said that strict stripping operations would be carried out in the city. Punitive police detachments were sent to the city.

And if someone during monstrous sweeps makes absolutely monstrous atrocities or increases the size of the old ways - as experience has shown, he will still receive an amnesty from the Kiev authorities. Dan carte blanche: kill, torture, steal. In a word, clean. And who is the occupier after that?