Maidan mathematics Poroshenko: "Kiev has fulfilled political obligations under the Minsk Agreement by 95%"

July 11 2016
70
During a joint briefing with Canadian Prime Minister Justin Trudeau, President of Ukraine Petro Poroshenko announced the signing of an agreement on a free trade zone between Ukraine and Canada. The signatories to the agreement were signed by the Deputy Prime Minister of Ukraine Stepan Kubiv and the Minister of Foreign Trade of Canada Hristia Freeland. From the statement Poroshenko (quote 112 Ukraine):

This is not just a lifting of tariff restrictions. This is a clear commitment within seven years of removing the 99% barriers to international trade. This is preferential access for goods of origin from the territory of Ukraine and Canada, respectively. This is the access of Ukrainian producers to the public procurement system of Canada and the access of Canadian manufacturers to the public procurement system in Ukraine. These are effective and decisive steps to combat corruption, these are new opportunities for expanding markets for goods. These are transparent terms of trade, this is the principle of declaring, and I would like to emphasize separately that we do not dwell on this. We will continue negotiations in order to broaden the scope of this agreement, and it is extremely important.

Poroshenko did not report how Canada’s entry into the Ukrainian market would specifically affect Ukrainian corruption. But he made a phenomenal statement in his hypocrisy, according to which, as it turns out, Ukraine “fulfills the Minsk agreements”. 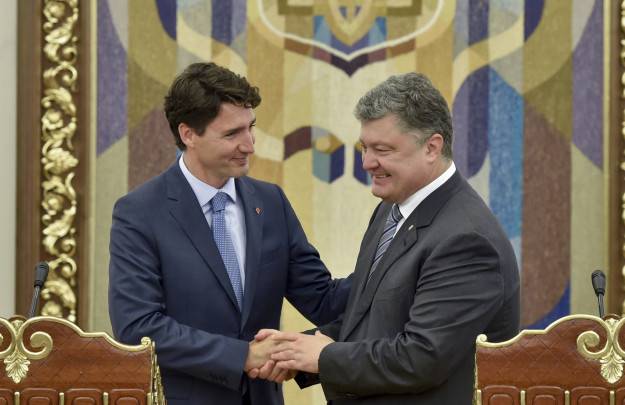 Speaking to reporters, Petro Poroshenko announced that Kiev, in the framework of agreements reached in Minsk, "fulfilled 95% of political commitments and 100% in the security sector."

It's amazing how easily this person allows himself to lie not only to the international community, but also to his own people. What are 95 and 100 percent? Where is the promised constitutional reform with the Donbass endowment with a special status, where the economic blockade of the Donbass is lifted, where, after all, is the withdrawal of Ukrainian security officials from the line of contact and a really working law on holding local elections and the status of the Russian language? ..