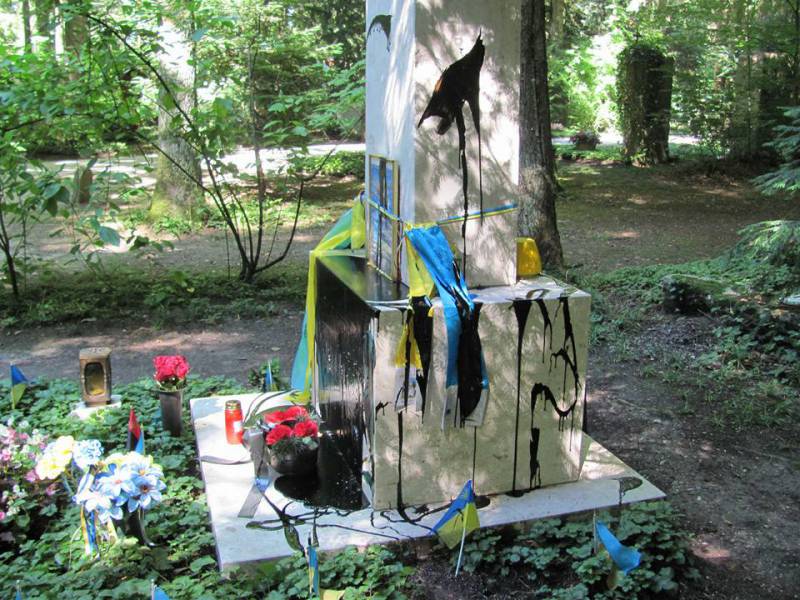 And how naive “moderate” Maidan supporters flooded with nightingales! Those who do not shout slogans for Bandera, who sincerely believe in European democracy, who believe that “the people have rebelled against corruption,” but do not want to notice the bitter fruits of “peremoga” ... When they were told that Pro-Bandera had come to power - and in fact the pro-fascist regime, - they hurried to argue: “What do you mean? Where did you see Bandera? Flare processions, speak? So after all, there are nationalists in Russia, but what does the state have to do with it? ”

They were in their arsenal of excuses and arguments about the monuments of Bandera and other Ukrainian nationalists, and the numerous books about these "heroes" on the shelves of bookstores ... All this, they say, private initiatives, and so - "there are no Bandera", "look less Russian TV "and even" Vysurkovskaya propaganda. "

And here the Kyiv City Council makes an unequivocal decision - to rename Moskovsky Prospect in the Ukrainian capital. Call it the name of Stepan Bandera.

87 deputies from 97 attendees voted for this renaming. Nobody dared to speak out. The deputies, in contrast to the silly idealist maydanschikov, are well aware that Bandera is not the fruit of the propaganda of Russian TV channels. The fate of Oleg Kalashnikov and Oles Buziny does not want anyone.

Ukrainian radicals in the wild delight - what they have long dreamed of has happened. Solid delights in the Ukrainian press and in social networks. Like, they "Moskaley".

But now - to get out will not succeed. It will not be possible to hide behind the question: “But where did you see the Bandera?” There will be some who, at least quietly, become thoughtful, others will have to change the training manual.

And quite against this background, the initiative of one of the enterprises of the food industry in the Ivano-Frankivsk region looks like a curiosity. Sausage "Moscow" will now be called ... "Bandera".

So the question of some naive or pretending supporter of the Maidan "Where did you see Bandera?" Can be answered: "You are in the fridge."

The so-called “decommunization” in Ukraine reached frank insanity. Before, for example, the Red Lyman was renamed ... Red Lyman (only now - in a different sense). But now under the skating rink of ridiculous renames have got ... Kutuzov Street and Kutuzov Lane in Kiev.

It is not clear, what Mikhail Illarionovich, who fought for the territories that belong to the present-day Ukraine, did not please the renamers. But now the street named after him will be called the street of General Almazov (who fought in the ranks of Petliura), and the alley will be named after the Russophobic writer Yevgeny Gutsalo.

It seems that the initiators of such renames have overdone too much with “de-communization” and wrote down Kutuzov to the Communists — it is difficult to think of another explanation.

The legendary Alexander Suvorov also got into the same “clip”, which Ukraine couldn’t do anything wrong, if only because Ukraine didn’t exist. The street, named in his honor, is now renamed in honor of the former officer of the Russian Imperial Army, Mikhail Yemelyanovich Pavlenko, who later emigrated, became a Ukrainian nationalist, and relied on the help of Nazi Germany in the "liberation of Ukraine".

An important detail - the decision on all these renaming was made right before the NATO summit in Poland.

Suppose such a "gift" as the elimination of the streets of Kutuzov and Suvorov, some NATO countries can accept with pleasure. At one time, these commanders caused a lot of headaches to the European enemies of Russia, to put it mildly.

But the main "gift" - another act of serving the cult of Bandera - they openly insulted at least the country that has now hosted the NATO summit. Namely - Poland.

While in Kiev it was decided to rename Moskovsky Prospect to Bandera Avenue - in Warsaw they recalled the Volyn Massacre, organized by the so-called “Ukrainian Insurgent Army” against the Poles. “The cult of Bandera and the UPA is a spit in the face of the Poles. We cannot allow it, ”so said the people who demanded that the Volyn massacre be recognized as genocide.

And the upper chamber of the Polish parliament adopted a corresponding resolution. Senators appealed to the lower chamber - the Sejm - with a call to pay tribute to the memory of those who fell during the Volyn Massacre and make 11 July a National Commemoration Day for the victims of genocide.

After that, Petro Poroshenko had the hypocrisy to bow down before the monument to the victims of this massacre committed by Ukrainian nationalists. Those most whom today ukrohunta idealizes, in whose honor he names the streets and with whom he erects a monument behind the monument!

But, as it turned out, Poland is not the only European country (where the maydanschik is so eager), not accepting the Bandera personality cult.

As if the answer to the glorification of this dubious person, in Germany, citizens eloquently expressed their attitude towards the idol of ukronationalists. Some black paint was added to his grave.

“Inhumans desecrated the grave of Stepan Bandera in Müncher,” said Vadim Kostiuk, the Consul General of Ukraine, emotionally. They would have already decided more precisely where they are so eager. To the Promised Land - to Europe or to "nonhumans" who do not accept such "heroes" of Ukraine.

Ctrl Enter
Noticed oshЫbku Highlight text and press. Ctrl + Enter
We are
Black and white of modern patriotism. A word about monumentsIs there a solution to the problem of patriotic education of young people? Private initiatives
Military Reviewin Yandex News
Military Reviewin Google News
36 comments
Information
Dear reader, to leave comments on the publication, you must sign in.