Split of Ukrainian power: Bandera Avenue in Kiev and flowers in Warsaw to the victims of Ukrainian nationalists

July 11 2016
27
At the end of last week, news agency tapes brought two messages, reflecting essentially the paradoxical trends of the new time. On Thursday, in Kiev, the city council of the Ukrainian capital renamed Moskovsky Prospect to Stepan Bandera Avenue. On Friday, the Polish Senate announced 11 July as the day to commemorate the victims of the Volyn massacre, organized by 73 a year ago by Bandera’s followers - Ukrainian nationalists. 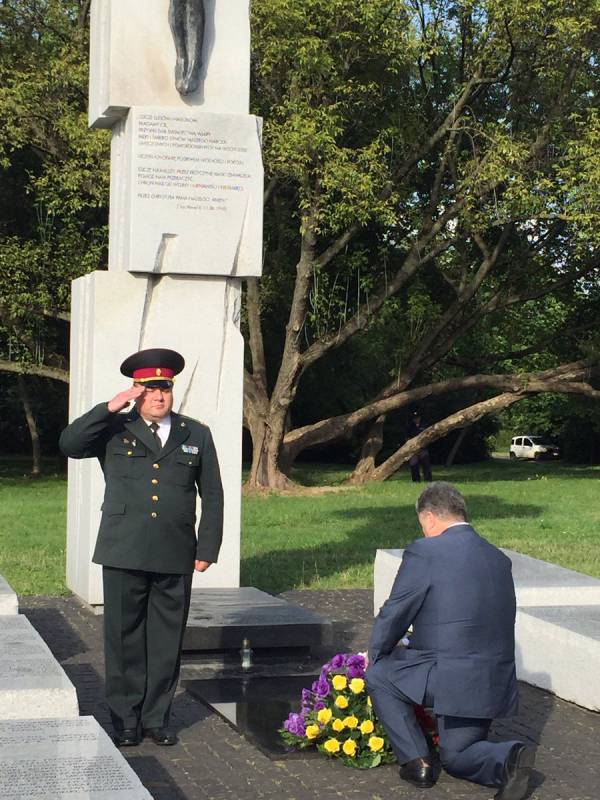 For the renaming of Moscow Prospectus 87 voted from 97 present at the meeting of deputies of the City Council. None of them dared to oppose the scandalous decision. At the same time, the nationalists have not succeeded in "pushing" the renaming of General Vatutin Avenue (liberating Kiev during the Great Patriotic War) into Roman Shukhevych Avenue - Commander-in-Chief of the Ukrainian Insurgent Army (UPA) in 1943-1950.

Nevertheless, even the appearance in Kiev of Stepan Bandera Avenue, positioned by Polish historians as the leader and founder of the Ukrainian Insurgent Army, shocked the neighbors. In Poland, a lot of attention is now paid to the memory of victims of the Volyn massacre. Voting in the Polish Senate was only a reflection of the opinion that had formed in society.

The resolution of the Senate did not suit everyone. On Saturday in Warsaw, a rally was held near the Diet, demanding to recognize the massacre in Volyn as a genocide of the Polish people by the Ukrainian Insurgent Army. This event became widely known not because of its agenda, but because not far from the rally at the same time laying flowers to the monument to the victims of the Volyn massacre, President of Ukraine Petro Poroshenko.

This happened during the visit of the Ukrainian president to Warsaw to the NATO summit. Information agencies and the blogosphere frolicked about Poroshenko’s torn socks, seen in the photos from the sad ceremony. The ethical side of the act of the President of Ukraine was discussed only by the Poles.

They called this behavior hypocritical. After all, Petro Poroshenko today is the main conductor of politics, the heroic Ukrainian nationalists. Back in October, 2014, he signed a decree abolishing the celebration of the Day of Defender of Ukraine 23 in February and postponing this holiday to October 14, the day the Ukrainian Insurgent Army was founded. One of the founders of the UPA was Stepan Bandera.

Last April, at the request of Petro Poroshenko, the Verkhovna Rada adopted a law recognizing the organization of the OUN-UPA as fighters for the independence of Ukraine and granted its participants the right to social guarantees.

All this is seen in neighboring Poland. Here, the crimes of the Ukrainian insurgent army are remembered, the main of which is the massacre by Ukrainian nationalists of the Polish civilian population in Volyn in July 1943. The total number of victims of the tragedy, which received the name Volyn Massacre among the people, varies according to various sources from 36 to 100 thousand people.

In this regard, there is nothing surprising in the way Petro Poroshenko laid flowers at the monument to the victims of the Volyn tragedy in Poland. “I consider the behavior of Petro Poroshenko to be hypocrisy,” such a statement to the media was made by the leader of the Popular Movement party, deputy of the Polish Sejm Robert Vinnitsky. - In Ukraine, nationalist monuments are put up, street names are changed in their honor. The cult of the UPA and Bandera is developing, it is given state status. Poland lays wreaths at the monument to the victims of the genocide, and in Ukraine they honor those who implemented this genocide. For me, for the descendants of the victims, this is simply hypocrisy. ”

In Poland, began to beat migrants from Ukraine

It is no secret that the Maidan so shook Ukraine, that a huge mass of people spilled out of the country. Began to look abroad for happiness and just feed. According to the estimates of the Polish Union of Entrepreneurs and Employers, more than a million Ukrainians left for Poland. These people, although they were mainly engaged in low-paid, low-skilled work, now bring in the Polish budget from 1,6 to 2 billion euros.

The amount is serious. The Poles feel it and are, in the majority, benevolent to unexpected economic migrants. However, the situation is changing. Bandera heroization did not pass unnoticed for Poland. If earlier more than half of the population supported the provision of a residence permit to Ukrainians, the latest surveys of the Maison Research House already fix a sharp cooling of interethnic harmony. With sympathy for the Ukrainians are less and less Poles.

In addition to different views on historical the past added new facts of recent times. Statistics showed that almost a third of Ukrainians who entered the country now work illegally. Together with economic migrants, Ukrainian crime entered Poland. Not so long ago, for example, in the suburbs of Warsaw, the Polish police detained more than 50 Ukrainian citizens who organized an underground tobacco factory there and illegally produced cigarettes.

During the search, the police confiscated more than five million cigarettes, over three tons of tobacco, and packaging equipment. The total cost of confiscated close to one and a half million euros. The illegal business was run by three Ukrainian citizens. What hastened to inform the Polish media.

Among other things, they increasingly began to appear information about the attacks of the local population on Ukrainian migrants. Fights rarely do without serious injuries and hospitalization of visiting workers. So it was in Kutno, Svidnitsa, Przemysl and other cities.

Cooling relations with neighbors noticed and in Ukraine itself. From July 4 to August 2, the small border traffic regime (MTD) was suspended at the Ukrainian-Polish border. This decision is justified by the Polish authorities with security measures for holding a NATO summit and the visit of Pope Francis.

The same ban was imposed on the Polish-Russian border in the Kaliningrad region. There it is associated with the "Russian threat." Poles did not really explain anything to the Ukrainians. The owners of MTD cards considered innovations at the border to be a struggle against “troubles”, as smugglers are called in Galicia. Now they have a hot season. However, the month will have to sit without a "salary".

However, the current difficulties with crossing the Polish border are fading for Ukrainians compared to how the situation around the historical memory of the Volyn Massacre is heating up in Warsaw. Here is how the Lviv portal Zaxid.net writes about this: “What we couldn’t believe in anything, although this was happening a long time ago. Ukrainians in Poland are increasingly perceived as unwanted newcomers. After the NATO summit in Warsaw, the Polish nationalist power will not be so bound by the rules of decency, and after the release of the film “Volyn” on screen, Polish society is even more radicalized. That's when the fun begins.

In fairness it should be noted that the alleged “fun” was largely provided by the new Kiev authorities themselves. Taking the focus on Europe, they confidently believed that radical nationalism, built on riotous Russophobia, would become a passport to the EU. Time has shown: even the nearest neighbors did not support this policy of Kiev.

For them, Ukrainian nationalism is as dangerous as for other countries of the continent. They understood this in Kiev, too, because they tried a double policy: with Bandera in the shower and with flowers to go for the victims of his successors. New experience was unsuccessful. Now the hypocrisy and duplicity of the Kiev authorities has already become a fact for a “democratic Europe”.

Objective observers of the moral decay of the current Ukrainian elite have been talking for a long time. His origins were seen in the homeland past. The coup d'état in Kiev only removed all the obstacles along the way. And now not only Russia appreciated the danger of the Ukrainian nationalists for the world ...