The energy field of Iraqi Kurdistan: modernity in numbers 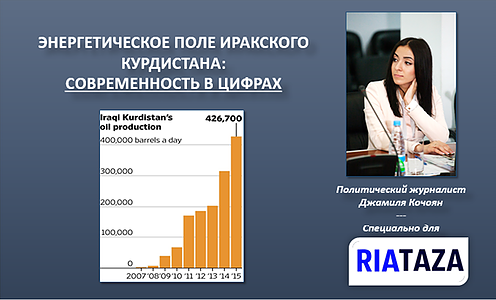 The oil component of the autonomous region of Iraqi Kurdistan is the main factor in the possible and at the same time impossible independence of autonomy from the center. Independent autonomy does not exist as a sovereign state, but in reality it cooperates in the oil sector at the state level.

The energy attractiveness of Iraqi Kurdistan made its first appearance in 2006, when the Government decided to develop favorable conditions for international oil companies.

The first well in Iraqi Kurdistan was drilled in 2006 by the Norwegian company DNO.

2010 and 2011 became the period of the first discoveries, the time of entry into the region of large international oil companies.

In 2011, the largest and one of the dominant players in the international oil market, Exxon Mobil, began its operations. The company has acquired the right to develop oil fields.

His example was followed by Chevron, who received the right to participate in two projects near the city of Erbil. Baghdad responded immediately, depriving these companies of mining contracts in the rest of Iraq. But such actions by the central government did not stop the development of the Kurdistan oil fields by foreign companies. Foreign oil companies were willing to lose contracts in the southern and central regions of Iraq in order to maintain their positions in Kurdistan. The Kurdish autonomy has created a favorable investment and tax regime, legislation on natural resources has been adopted, and there are safe conditions for the residence of foreigners [1].

Since 2011, the Government of Kurdistan has signed more 50 contracts with oil companies from 17 countries, on more favorable terms than those offered by Baghdad.

In 2012, the purchase of a stake in Kurdish projects was announced by major French Total SA

From 2014, according to representatives of the Kurdistan Regional Government, autonomy exports 200 thousand barrels per day and forecasts 1 million barrels per year exports to 2016. In fig. 1 [2] presents the dynamics of growth in exports of Kurdistan oil (for the period 2007-2015). 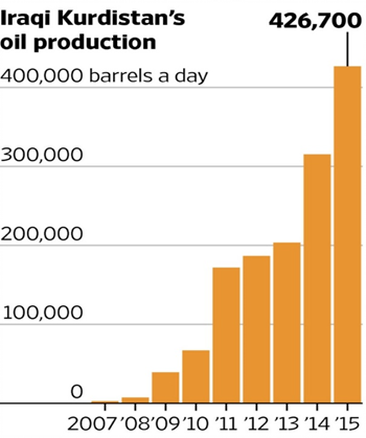 In 2015, Erbil and Baghdad reached the following landmark agreement: the Kurdistan Regional Government (KRG) must export 550 000 oil barrels per day through the Iraqi State Oil Marketing Organization (SOMO), and the Iraqi government was to provide the KRG with a full 17% share federal budget (see fig. 2).


Figure 2. - An example of the interaction of the Iraqi Government and the Kurdistan Regional Government on the issue of oil sales 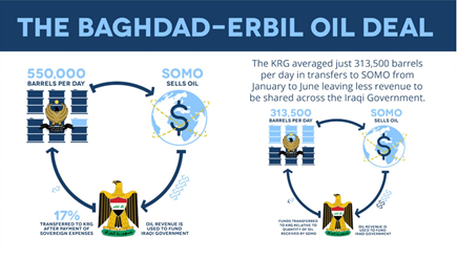 However, such a promising agreement did not save Kurdistan from the financial crisis. The main reason is the non-payment by the Iraqi center of the agreed 17% to Kurdistan. In addition, despite the increase in total production (increased to 430 thousand barrels per day), oil revenues decreased significantly due to lower oil prices and the actions of the Islamic State [3].

The following is a list of companies operating in Iraqi Kurdistan (the dominant companies with the maximum amount of work are marked in red).

The largest companies focused specifically on Iraqi Kurdistan are the Norwegian DNO, the Turkish Genel and the British Gulf Keystone Petroleum, which carry out their work in the largest fields in the region: Tawke, Taq Taq and Shaikan. Together, they produce about 300 000 barrels per day.

Below are the economic indicators of profits from the oil industry in Iraqi Kurdistan, the cost of employee salaries, the volume of oil exports for the last year by months, as well as the number of days of inactivity and causes.

Data analysis table and documents of the Regional Government of Kurdistan allows the following conclusions.

In Kurdistan, there are more than 1,4 million employees (doctors, teachers, government employees, etc.) whose salaries are about $ 88,6 million per month (30,4 $ million of this amount is allocated to the “peshmerga”, to Kurdish detachments leading their national defense and liberation movement against the "Islamic state"). In this regard, in my opinion, it is important to a pragmatic reduction of the bureaucratic apparatus. The costly fight against terrorism aggravates the economic crisis in Iraqi Kurdistan. Providing refugees - victims of hostilities - costs South Kurdistan 1,5 billion a year (125 million a month).

The economic situation is complicated by the debt of the Kurdish government, which includes, above all, the salaries of 1,4 million state employees (about 70% of all government spending) who did not receive salaries from October to December of 2015. Faced with dismal financial prospects, the Government, at the beginning of 2016, began the process of cutting public sector wages (by 10% - 75% depending on the position held).

In general, according to the Kurdish Government's estimates, the region’s reserves are 45 billion bbl of oil (more than 6 billion tons). And Kurdistan at the present stage is completely dependent on its oil sector (90% of all expenses the Government covers at the expense of profits from oil resources).

As the English philosopher Bertrand Russell said: “Oil smells all over the Universe”, and Iraqi Kurdistan in this case is not only an exception, but also a good help to other oil players on the world stage. Since Kurdistan is sitting on the oil needle (this is quite justified by the global oil deposits), the economy is completely dependent on "black gold", and therefore risks being hostage to the vagaries of the world's energy weather. In my opinion, diversification, development and creation of new sources of income is important for economic stability and income balance. The main law of diversification of the economy says: in order not to go bankrupt in projects, you need to invest not one project, but two or more projects. In this regard, it is important for Kurdistan to develop other sectors of its economy, including agriculture, a hotel and resort complex, tourism, etc.

Considering all the above conditions, political benefits and economic indicators of the region, Iraqi Kurdistan can be called a promising area for further geological exploration, subsequent development of deposits and investment of funds. The extent of the various political, economic, and legal risks that potential Russian investors may face is much lower than in other areas and provinces of Iraq and much lower than in neighboring countries.

The advantages of Kurdistan - in reliable people and oil. And let oil provide economic independence, and the people - the integrity and unity of Kurdistan.