At the NATO summit yet no sensations

July 9 2016
21
The first day of the NATO summit in Warsaw ended without sensation, the alliance expectedly made all the decisions that European leaders have been talking about over the past few months, reports TASS. 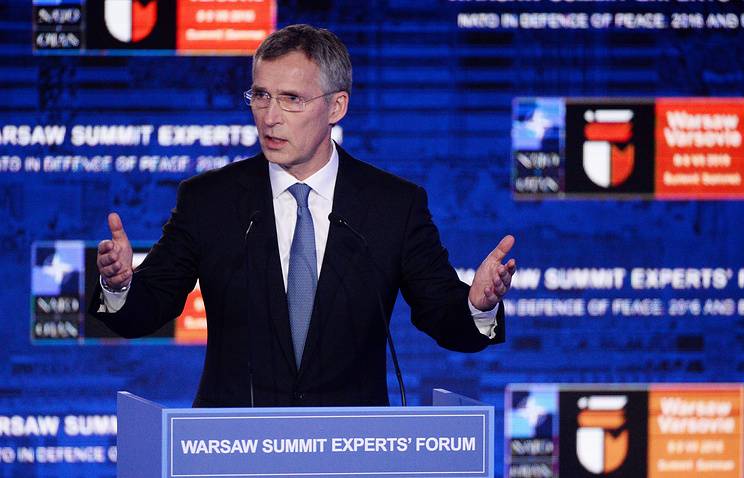 “The NATO countries have finally announced the deployment of four multinational battalions in the Baltic countries and Poland and the creation of a multinational brigade in Romania. The Alliance announced the withdrawal of the NATO missile defense system to a basic level of operational readiness and increased the priority of its cyber defense system. The Alliance also urged Georgia to continue defense and security sector reforms, ”the agency said.

The 4 “leading nations” were identified, which will be the backbone of the 4's multinational battalions deployed in Eastern Europe.

“Canada will assume the role of the“ leading nation ”in Latvia, Germany will lead the battalion in Lithuania, the United Kingdom in Estonia, and the United States will be the leading nation in Poland,” said NATO Secretary General Stoltenberg at a briefing.

“These will be strong multinational battalions that will show the power of transatlantic ties and clearly demonstrate that an attack on one ally will be regarded as an attack on the entire alliance,” he stressed.

“NATO has already strengthened its presence in the Black Sea region and in the southeast of the alliance. In particular, air patrols have been strengthened, and measures have been taken to support Turkey, in particular, the deployment of elements of NATO missile defense and AWACS radar aircraft there, ”the secretary general noted.

“We also decided to instruct our defense planners to prepare proposals for the meeting of NATO defense ministers in October on how we can expand our presence not only on land, at sea and in the air,” he said.

Stoltenberg assured journalists that NATO will inform Russia at the meeting of the NATO-Russia Council (NRC) at the level of July 13 ambassadors of July about the results of the Warsaw summit. ”

“The NRC was created as a structure that should act in any weather, especially when tensions in our relations are high. Today it is especially important. Therefore, we have decided to inform Russia about the decisions of the NATO summit, because we are transparent and we have nothing to hide, ”he added.

The Secretary General also announced the withdrawal of the NATO missile system to a basic level of operational readiness.

“We made a decision to state the withdrawal of the NATO missile defense system to a basic operational level of readiness,” he said. “This means that the US ships stationed in Spain, the radar in Turkey and the base of interceptor missiles in Romania can now interact.”

At the same time, Stoltenberg once again emphasized the defense character of the system. “This shield is designed to counter attacks from outside the Euro-Atlantic area and does not pose a threat to Russia's nuclear deterrence potential,” he said.