Once again on the PMCs: let's talk about the nuances 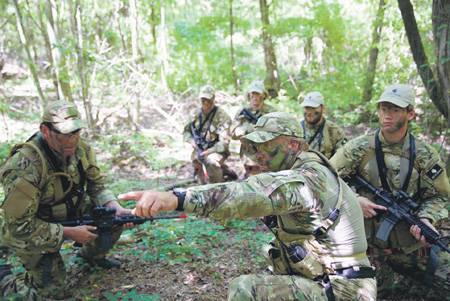 Foreign PMCs pay great attention to preparing their fighters for combat in difficult terrain conditions. Photos from the page of the Academi training center on Facebook


Quite a lot has been written about private military companies (PMCs) in detail. However, despite this, public opinion and not only reigns amateurish approach to the creation and use of PMCs. I will try to clarify the understanding of a number of regulations on the activities of these organizations.

The modern market of private military services began to take shape in the second half of the twentieth century. Its subjects are private security companies, on a reimbursable contractual basis, providing (mainly outside their own country) military services to legal entities and individuals.

Currently, according to various estimates, there are more than 3 thousand private military and security companies in the world, most of which are registered in the USA, France and Great Britain. Since then, they have trained army units in 42 countries and participated in more than 700 conflicts. According to the UN, the volume of exports of private military and security services in different years of the twentieth century ranged from 20 to 100 billion dollars a year. Recently, the demand for these services is increasing, and, according to experts, its annual growth will be at least 7%. Thus, by the beginning of the 21st century, a transnational private military enterprise industry appeared in the world. Moreover, this “tool” is increasingly used by leading countries to solve foreign policy problems. The absence of PMCs in Russia is the modern position of the country's political leadership. Depending on the level of international threats, it may be revised.

A special role in the development and application of PMCs is played by supranational coordination and control structures, which, on the one hand, as well as nation states, see PMCs as a tool for implementing policies without their direct participation, and on the other hand, they are considered as a kind of alternative to regular armies when internal forces arise. and regional conflicts.

Under the pressure of supranational coordination and management structures, privatization of the traditional functions of the state by private organizations is carried out. This process affects both the military and security sectors. Increasingly, private military service providers are used to perform military functions that until recently were performed by the state. As noted in the UN documents, the privatization of state security functions has become a global trend.

New political realities influenced the resolution of issues of war and peace, changes in national military doctrines, and the qualitative state of the leading armies of the world. Instead of “traditional” armies, special forces are demanded for conducting police operations in the third world countries, since now the enemy of the armed forces of the state is much more likely to become not the regular army of the neighboring side, but partisan and terrorist groups. To carry out such operations, PMCs are most suitable, whose control and tactics of their actions are more flexible and better suited to counteract irregular formations.

Consequently, the emergence of PMCs in a certain way changes not only approaches to the use of military force in peacetime, but also the concept of the military policy of the state as a whole. The presence in the arsenal of any subject of international relations of such an instrument gives it significant advantages in global competition.

In this regard, it should be emphasized that a serious shortcoming of PMCs is their insufficient legal support. The analysis of the legislation of the states in which there are PMCs indicates that at the domestic level, the activities of PMCs are currently regulated by national legislation in only a small number of countries and are mostly superficial. In most cases, PMC activities outside the state are based on self-regulation and are carried out within the framework of corporate codes of conduct and activities of PMCs, which relate to the internal corporate aspects of training and the activities of their personnel, general principles that companies are required to comply with in providing military services, and other aspects.

Despite this, the activities of PMCs and their personnel in the international arena have so far not become the subject of international legal regulation. The current international law does not yet contain rules on the principles and conditions of such activities, which by and large endangers the sovereignty and independence of the states in whose territories PMCs operate.

In order to fill this gap in international law, the UN Commission on Human Rights in 2005 set up a UN Working Group on the use of mercenaries as a means of violating human rights and opposing the exercise of the right of peoples to self-determination, which by July 2009 prepared a draft International Convention on Control, supervision and monitoring of private military and security companies. This document will be legally binding after approval by the UN. He will establish minimum international standards in order to regulate the activities of PMCs and their personnel, and the creation of an international supervisory mechanism.

In addition, the international community undertakes various initiatives in the field of self-regulation of PMCs and the development of recommendations for them. In this regard, first of all, you should pay attention to the Montreux Document. It was developed in 2008 in the framework of the so-called Swiss Initiative by the Government of the Swiss Confederation in collaboration with the International Committee of the Red Cross to promote respect for international humanitarian law and human rights in relation to PMCs operating in conflict situations. It has been signed by more than 50 states, among which the Russian Federation is not included, since its legislation does not yet provide for this activity. This document should facilitate intergovernmental discussion of issues arising from the use of PMCs. At the same time, as indicated in the introduction of the Montreux Document, he himself and “the provisions contained in it do not create legal obligations”.

In 2010, the International Code of Conduct for Private Security Companies was adopted, the goal of which is to consolidate the agreed principles of their activities and create the basis for translating these principles into relevant standards, as well as establishing management and oversight mechanisms. This document does not impose any legal obligations and any legal liability on the companies that have signed it.

An analysis of the legal regulation of PMCs indicates that today there is no reliable legal mechanism capable of exercising effective control over their activities either at the national or international level. According to experts, to create such a mechanism, it is necessary, not excluding self-regulation, to establish a two-level legal regulation of PMC activities related to the export (import) of military and security services, namely:

- norms of national legislation, designed, on the one hand, to implement international obligations, and on the other hand, to take into account the peculiarities of national systems and traditions;

In accordance with the challenges of time, taking into account the international situation, the 14 of March of this year was also developed in the Russian Federation. The draft Federal Law “On Private Military Security Activities” was submitted to the State Duma, which was developed by experts from the Independent Scientific Foundation “Institute for Security and Sustainable Development” and used new approaches to the legal regulation of private military security organizations (hereinafter referred to as ChVOO). These include:

- implementation of legal regulation of the activities of the ChVOO by a separate federal law;

- the inclusion in the national law on ChVOO a number of basic provisions of international law, such as observance by the ChVOO and their employees of universal norms in the field of human rights and humanitarian law, respect for the sovereignty of states, etc .;

- availability of guarantees of legal use and application weapons, special and technical equipment of the ChVOO and their employees, as well as the lawful and proportionate use of force;

- the creation of licensing mechanisms for the activities of ChVOO abroad and in Russia;

- exercising control and supervision over the activities of ChVOO in accordance with the legislation of the state of registration and the state of territorial jurisdiction, as well as relevant international agreements and treaties;

An important guarantee of the legitimacy of the activity of the ChVOO is a three-level legal regulation of their activities - in accordance with international, Russian law and the law of the states of territorial jurisdiction.

11 April this year The Council of the State Duma decided: to appoint a responsible committee (State Duma Committee on Defense); submit feedback, suggestions and comments to the bill; prepare a bill for consideration by the State Duma; include the bill in the sample program. Thus, legal prerequisites were created for the creation of PMCs in Russia.

NOT MERCENARIES, AND PRIVATE BUSINESS

In conclusion, I will give a few explanations about the nature of the PMC activities.

Often these companies are compared with mercenaries. However, international law provides a clear definition of mercenaries. Thus, Article 47 (2) of Additional Protocol I to the Geneva Conventions of 12 August 1949 of the year defines a mercenary as any person who:

(a) Specially recruited locally or abroad in order to fight in armed conflict;

c) takes part in hostilities, guided mainly by the desire to receive personal gain, and which is actually promised by the party or on behalf of the party to the conflict, a material remuneration substantially higher than the reward promised or paid to combatants of the same rank and functions included in personnel of the armed forces of this side;

e) does not belong to the armed forces of the party to the conflict;

(f) Not sent by a state that is not a party to the conflict to perform official duties as a member of its armed forces.

None of these signs has anything to do with PMC activities. Moreover, according to international law and national legislation, PMCs do not have the right to take part in hostilities as part of regular armed formations. But they have the right to use weapons in the provision of military services specified in the contract with the customer, to protect themselves and ensure the security of the objects, property and people entrusted to them.

Often ask the question: private security companies - is a private business. How can the state benefit from them?

Indeed, PMCs is an expensive commercial organization. However, the talk that PMCs act at their own peril and risk does not correspond to reality. In most countries, they are under strict control of the security forces of the state of registration. Private security agreements are necessary there and then when other instruments of the state’s foreign policy are absent or ineffective. The emergence of Russian PMCs will not particularly affect the state of the military services market. Another thing is that a number of developing states will prefer Russian PMCs.

And finally, a number of experts point to the fact that PMCs are not needed in the light of the fact that Rosgvardia, which has extensive powers, has been created in our country. This is not entirely true. Firstly, Rosgvardia is a state body, and secondly, its extensive powers do not allow it to perform the numerous tasks confronting PMCs. At the same time, it is necessary to take into account that the main beneficiary of Russian PMCs is the government of the Russian Federation.

Ctrl Enter
Noticed oshЫbku Highlight text and press. Ctrl + Enter
We are
“PMCs are a very effective instrument of influence”Sergey Kurginyan: The meaning of the game - a report on the WTO
Military Reviewin Yandex News
Military Reviewin Google News
121 comment
Information
Dear reader, to leave comments on the publication, you must sign in.