July 9 2016
85
65 delegations from NATO countries and 28 partner countries, as well as representatives of the UN, EU, World Bank and NATO headquarters will arrive in Warsaw 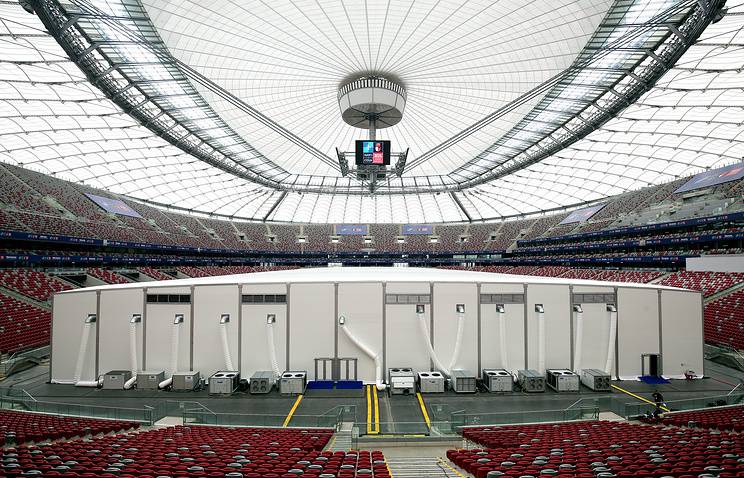 In Warsaw, a summit of heads of state and government of NATO’s 28 opens, at which the alliance must, in particular, decide to strengthen its capabilities in the eastern direction.

65 delegations from NATO countries 28 and partner countries 26, as well as representatives of the UN, EU, World Bank and NATO headquarters will arrive in Warsaw.

“Today we sadly admit that we have moved to long-term strategic competition with Russia, because our vision of Europe is fundamentally different,” said NATO Deputy Secretary General Alexander Vershbow before the summit at an expert forum in Warsaw.

According to him, this means that the alliance is “starting a new transformation process,” the opposite of what the alliance was conducting after the Cold War. NATO returns to the roots - to strengthen its borders in the eastern direction.

According to the program of the summit, the topic of relations with Russia will be discussed on the first day during a working dinner of the heads of states and governments of the alliance, at the Presidential Palace. The very same place where the Warsaw Pact was signed in 1955, uniting the socialist bloc countries that opposed NATO until 1991. The leaders of the two neutral partner countries of the alliance, Sweden and Finland, are also invited to this dinner, with whom the alliance in recent years has been more and more actively talking about the possible future of membership.

In practice, relations with Russia at this summit and in the foreseeable future are becoming a cross-cutting topic in NATO, to which to a greater or lesser extent most of the decisions of the alliance are relevant: from deploying 4 multinational battalions in the Baltic States and Poland to discussing cooperation with the European Union the field of combating hybrid threats.

In the final statement of the NATO summit, the heads of states of the alliance will announce the completion of the process of the most ambitious strengthening of their defense since the Cold War, Alliance Secretary General Jens Stoltenberg said earlier.

"The summit in Warsaw will take place at a crucial time for our security in the face of threats and challenges from different sides. In this regard, at our last meeting in Wales (September 2014), we developed a plan for the largest strengthening of NATO’s collective defense since the Cold War. I will inform Warsaw that NATO has fulfilled the promise. We have made the North Atlantic Alliance faster and stronger, "he said.

The Secretary General recalled that among the upcoming decisions of the summit were the deployment in Poland and three Baltic countries of four multinational battalions numbering up to a thousand people each, the beginning of the creation of a multinational brigade in Romania, the announcement of the withdrawal of the NATO missile defense system to a basic level of combat readiness, as well as discussion plans to increase the presence in the Mediterranean, the cooperation of the alliance with the Gulf States and the extension of non-combat operations in Afghanistan. In addition, NATO leaders and specially invited leaders of EU institutions to Warsaw will sign the first declaration of cooperation between the two organizations.

Strengthening defense requires funds, and the issue of expanding military spending will be one of the key topics at the summit. Before the summit, Stoltenberg noted, not without satisfaction, that, according to the latest data of the alliance, its total military spending should grow this year by $ 8 billion or by 3% from last year.

"We expect an increase in spending on 3% in European countries and Canada. This will be $ 8 billion US dollars," he said. The Secretary General naturally excluded the United States from these statistics: after all, it is Washington that demands that the allies in the alliance build up defense spending and acquire new military capabilities, that is, buy new ones weapon and equipment, the main manufacturer of which in NATO is the American military-industrial complex.

Stoltenberg recalled that at the summit in Wales in September 2014, the leaders decided to increase the military spending of the alliance in three phases. "First, reduce spending cuts, then gradually increase defense budgets and only then complete the task of reaching the mark on the size of the military budget in 2% of GDP," he noted.

The Secretary General also said that NATO’s 28s finally found a fourth state, which would provide servicemen to complete the basis of the fourth and last international battalion for the Baltic States and Poland. This country will be Canada. The first three battalions have already promised to lead the United States, Britain and Germany.
NATO representatives have not yet
they clarify what percentage of personnel for each of the four battalions will be given by the corresponding "leading state" and how many more soldiers from the other countries will get into its composition in order to ensure the multinational character of these units. The military in these units will be rotated, but how often this will happen is still unknown. The total number of each of these battalions should be from 800 to 1200 people. They will be directly subordinate to the command structures of NATO.

On the other side of the eastern flank of NATO - in the Black Sea region - the alliance plans to increase its military presence by the brigade in Romania. However, less is known about her than about the four multinational battalions that will defend the alliance in the north.

"We will decide on a special NATO presence in Romania," said Stoltenberg. He stressed that the alliance’s forces "in the southeastern region will be balanced and will develop on the basis of the brigade in Romania, which in the future will become a multinational unit."

“This structure will be under the command of the Southeast multinational headquarters. In addition, we strengthened the alliance’s position in the southeast region by increasing air patrols and maritime presence in the Black Sea,” the Secretary General said.

In addition, at the summit in Poland, NATO "intends to announce the release of its missile defense system to the initial level of readiness." "Our goal is to be able to announce the achievement of operational potential at a meeting in Warsaw, and we are working on it now," said Stoltenberg.

According to him, "the missile defense system is important," since the alliance "is observing the proliferation of ballistic missiles, and NATO must be able to protect the territory and population of countries from potential attacks."

"These efforts are not directed against the Russian Federation, they are directed against the threat coming from outside the Euro-Atlantic region. In addition, it is important to remember that this is a defensive system, it is not offensive weapons," Stoltenberg argued
.
Speaking at 12 in May at the Romanian military base in Deveselu (Olt county in the south of the country, in 180 km from Bucharest), he officially announced the operational readiness of the American anti-missile defense complex Aegis located there.

The next day, in the Polish village of Redzikovo in the north of the country, there was a ceremony to start building a US missile defense base, which will reach operational readiness in 2018. It will become part of the so-called European missile defense shield and will be equipped with medium-range interceptor missiles.

On May 27, Russian President Vladimir Putin told a press conference following talks with the Greek prime minister that Moscow would be forced to take retaliatory measures to minimize the threat posed by the deployment of US missile defense elements in Romania.

18 June at a meeting with the heads of world news agencies, the Russian leader stressed that the US missile defense system deployed in Europe has the potential to become an offensive system and can be used against the Russian Federation.

NATO does not share these fears and assures that all its efforts are of a "balanced, proportional and exclusively defensive nature."
In order to tell the Russian side about it again, the alliance is working with Moscow on holding, now after the summit in Warsaw, a meeting of the Russia-NATO Council at the ambassadorial level.

The Alliance "continues to prepare with Russia a meeting of the Russia-NATO Council (NRC)", which will take place on July 13, Stoltenberg said earlier.

“We are still open to dialogue with Russia. The NRC can play an important role as a platform for dialogue and information sharing,” he said. Stoltenberg also did not rule out that later it would be possible to discuss the issue of holding a ministerial meeting of the NRC, but for now it’s too early to talk about it.

Naturally, the Secretary General of the Alliance did not overlook the topic of leaving the UK from the European Union. However, he looks at things with optimism.
According to Stoltenberg, leaving the UK community, which covers about a quarter of the defense expenditure of the European member states of the alliance, "will not affect its role in NATO."

"Brexit will change the relationship between the UK and the EU, but it will not change the position of Britain within NATO. The role of Britain remains the same, it is a strong ally," he said. The Secretary General expressed confidence that the new government of the United Kingdom will continue the current course of the country in the alliance.

“Brexit can only strengthen cooperation between the EU and NATO. The EU and NATO are facing new security challenges, but neither the European Union nor the North Atlantic alliance has a full arsenal of means to counter, for example, hybrid threats alone. Therefore, we need to work together,” noted Stoltenberg.

In principle, NATO expects that the UK’s withdrawal from the EU will only push the EU into closer cooperation with the alliance.

To give this cooperation an institutional character, Jens Stoltenberg, European Commission President Jean-Claude Juncker and European Council President Donald Tusk will sign a joint declaration on cooperation between the North Atlantic Alliance and the European Union.

The Alliance will also hold meetings of the Ukraine-NATO Commissions and Georgia-NATO Commissions, at which assistance to the reform process in the defense sectors in these countries will be discussed. The question of providing Action Plans for membership in the alliance is not yet being discussed.

The summit will sign an agreement to provide Ukraine with a Financial Assistance Package to support the defense and security sector.

"They (the summit participants) should take a full-fledged aid package that consolidates NATO assistance to the Armed Forces of Ukraine," US Secretary of State John Kerry said earlier, noting that assistance will be provided to bring the Ukrainian army closer to NATO standards.

He recalled that the United States, in addition, supported the investment of money in four trust funds for the development of cyber defense, medical support, logistics and command and control systems of the army.

Ctrl Enter
Noticed oshЫbku Highlight text and press. Ctrl + Enter
We are
Two days of discussions in Brussels. NATO is confident that they fully fulfilled their mission in AfghanistanWhat you didn't want to know about England
Military Reviewin Yandex News
Military Reviewin Google News
85 comments
Information
Dear reader, to leave comments on the publication, you must sign in.