Long-distance sea trips: intermarkets and payloads instead of cruisers

July 10 2016
41
The Russian fleet needs ships in the far sea zone. With this statement, which has been continuously repeated over the past decade, it is impossible to argue. But what to do if there are critically not enough suitable combat units in the composition of the Navy, and it is necessary to be present in dozens of points of the World Ocean? Ships are sent to the campaign, not intended for long autonomous voyages and auxiliary vessels.


IRAs are leaving at sea

The problem of the shortage of ships for long autonomous campaigns arose acutely after the decision was made to revive the permanent naval unit in the Mediterranean. One of the first "swallows" who went on a campaign outside their area of ​​responsibility was the small rocket ship Samum, which had spent a month and a half surfing the Mediterranean. Despite the strike power of its rocket armament, comparable to the destroyers of the 956 project, it remains the ship of the near-sea zone, intended for rapid strikes and withdrawal under the cover of air defense. 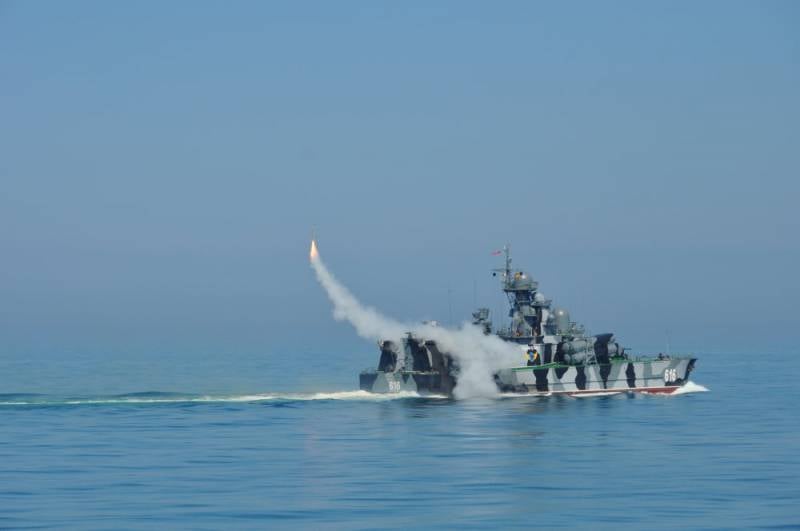 By 2015, the work of small rocket ships outside the native Black Sea coast became the rule rather than the exception. To accomplish the tasks in the Mediterranean, the XRNXX Mirage project was sent, with autonomy of only a day in 1234. This is sufficient for sea crossings within several seas, but it strongly binds the crew to the coastal infrastructure. It is worth noting the weather restrictions on the application weapons - the ship’s seaworthiness is 5 points. 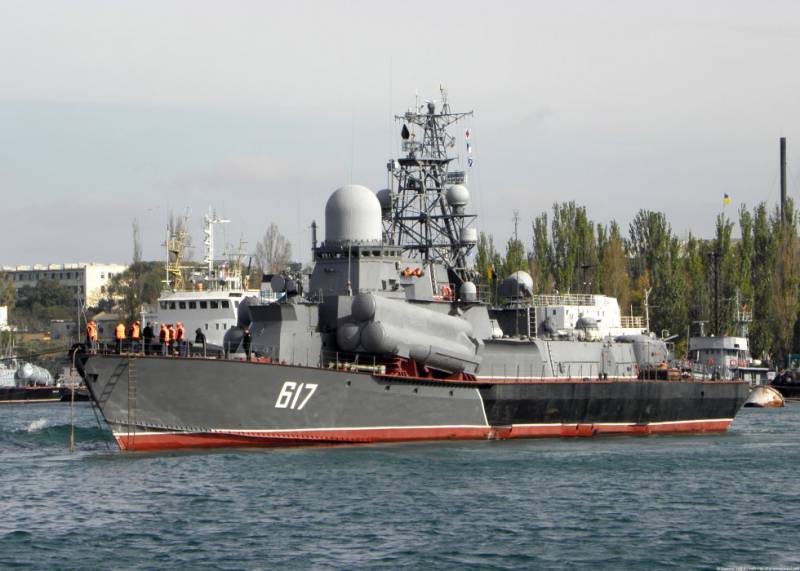 A year later, the ambitious plans of the Navy to retain military superiority in the region forced two more small rocket ships to be sent to the Mediterranean: the Serpukhov and the Green Dol. This time, the newer project, 21631, which their builder, the Zelenodolsk plant named after Gorky, classifies as "multi-purpose ships of the river-sea class." 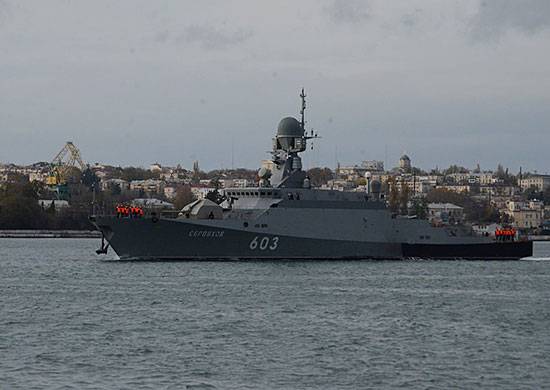 WHEN DOESN'T ENOUGH THE FIGHTING UNITS

Do not forget about such an important task as the demonstration of the Russian flag at international naval events. This is a strategic task that seriously affects the image of the state, the implementation of which many foreign commanders assign to the most powerful and combat-ready ships. In Russia, these tasks are often assigned to Project 1164 missile cruisers and Project 956 destroyers. However, in recent years, there are some exceptions, which in diplomatic circles could well be regarded as disrespect. In 2013, the killer ship KIL-158 of the Black Sea was sent instead of a large landing ship for the annual Russian week in Greece fleet. 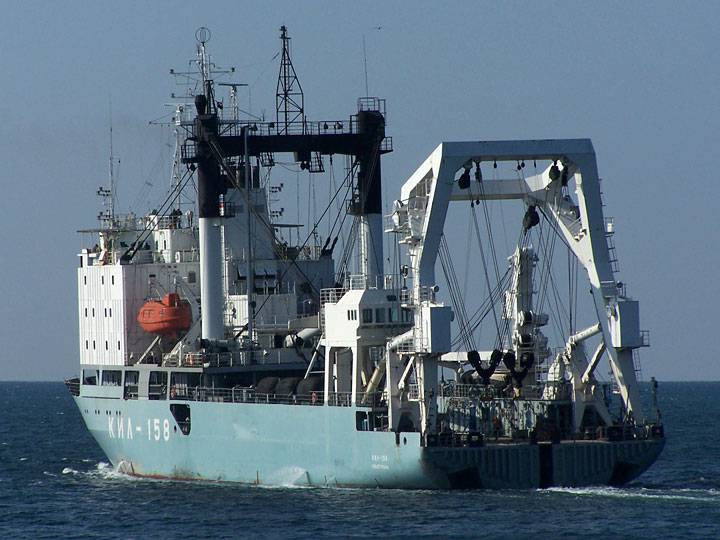 In 2016, in the Indian International Fleet Review, история repeated There, instead of warships, the rescue ship Epron was sent, which, with more than 50 years of age, is a well-deserved fleet veteran. The situation was twofold. It is impossible not to be proud of the fact that Russian sailors are able, during such a period, to support the material part in the state of ability for long-distance sea trips. However, it is impossible not to regret the more than modest demonstration of the combat capabilities of the state against the background of the frigates, destroyers and cruisers that came to the IFR. 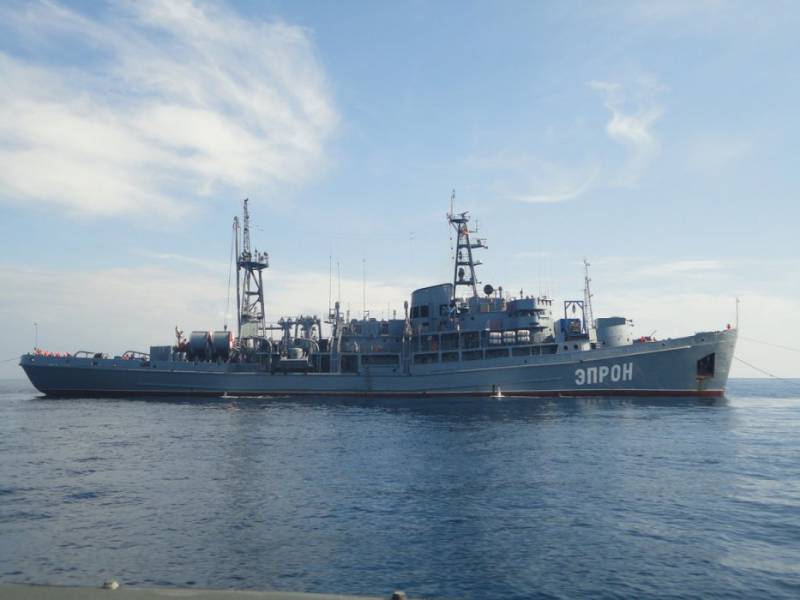 AT THE JOINT OF THE PAST AND THE FUTURE

The reason for replacing the 1 ships of rank for much smaller combat units and even auxiliary ships lies in the very long-running renewal of the Russian Navy. Today, the country's largest shipbuilding and ship repair yards are heavily loaded with military orders, but for this very reason, the combat capabilities of the Russian Navy relative to the US Navy, according to statistics from the Central Naval Portal, have decreased to three years ago. A number of 1-th and 2-th rank ships are in long overhaul, while their modern counterparts are not transferred to the fleet as quickly as the extensive sea borders of Russia and tasks in the far sea zone require.

From the series of frigates of the 11356 project, only three ships will be part of the Navy in the foreseeable future, the main frigate of the 22350 project is still under test, the destroyer “Leader” has just formed in the form of a draft design. But already there have been statements about the construction of a large series of small rocket ships of the new project 22800. 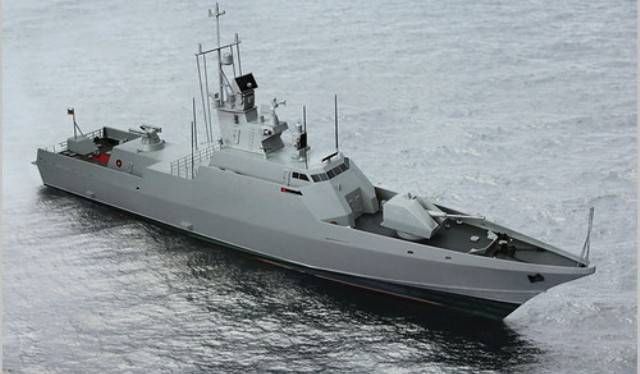 So, the era of long-distance marches RTOs is just beginning. Taking into account the fact that the Caliber missile systems installed on them managed to “thunder” to the whole world, they could cope with the tasks of displaying the flag in foreign ports properly. "Better a small rocket ship in the ranks than the destroyer in the project," - such an opinion was expressed in the press back in 2012 year. Today, in the context of the tasks of participating in international naval events, it can be rephrased: "Better is a small rocket ship than an auxiliary ship."