Infinite and unsubstantiated media accusations against Russia (The Nation, USA) 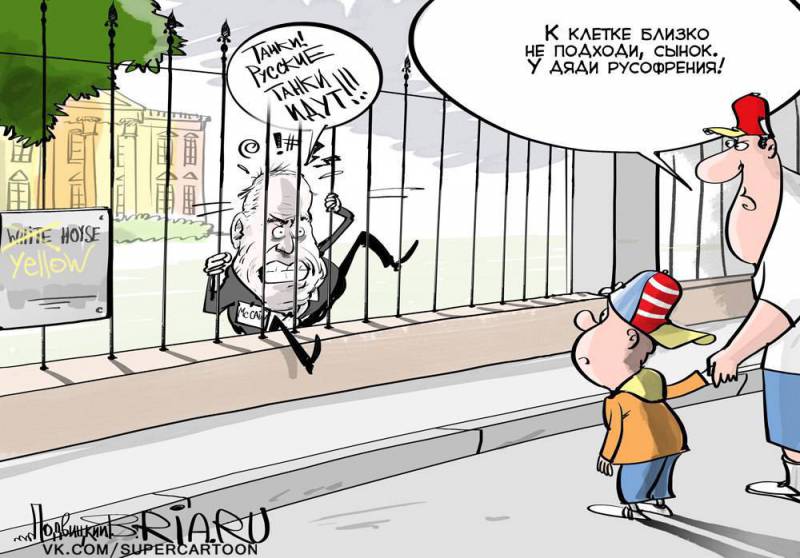 Within one month, Russia was accused of hacking into the documents of the National Committee of the Democratic Party, the organization of Brexit, the secret support of Trump and much more.

If there is a country in the world about which the media write without the slightest observance of journalistic standards, then this is Russia. Over the past month, Russia was accused of having hacked the documents of the National Committee of the Democratic Party, that it organized Brexit and is providing Trump's secret support. And there is a lot more.

14 Jun. Ellen Nakashima (Ellen Nakashima) from the Washington Post published a material that at first glance seemed a real blockbuster, the Watergun scandal of the cybernetic era. She claimed that Russian hackers broke into the computer network of the National Committee of the Democratic Party and stole the data of the investigation, which the opposition was conducting against the candidate for President Trump. According to Nakashima, Russian hackers acted so thoroughly that they hacked the network and were able to read all the electronic correspondence and chats. However, the firm Crowdstrike, who recorded the hacking, acknowledged that she did not know exactly how the hackers penetrated the network. However, these people were one hundred percent sure that the Russians were operating here.

Needless to say, the American media from all sides began to suck this history. "The National Committee reports that the hackers got into its files by getting a dossier on Donald Trump," the New York Times immediately announced. The stubborn media critic Adam Johnson from the nonprofit organization FAIR (stands for “Impartiality and accuracy in journalistic activities”) compiled a list of headlines that appeared in leading publications a day after the sensational news Nakashima:

But that's not all. A certain “former spy” 18 of June appeared on the pages of The New York Observer and announced the following: Kremlin hacker operations go far beyond the framework of the National Committee of Democrats, and the Islamic State hacker group (terrorist organization banned in Russia - approx. Transl.) , or the so-called “Cyber-Caliphate”, is in fact the work of the Russians (well, as we didn’t guess at once about this!). “The actions of CyberHalfith,” Observer reported, “is a Russian operation under a foreign flag.”

And even that is not all. Rachel Maddow of MSNBC joined the mob of whistleblowers, delivering a demagogic speech in which she accused the Russian president that he was behind the hacker attack on the National Committee. “These hackers,” Maddow announced, “received a task from the Russian government, from Vladimir Putin,” although in his message Nakashima does not say anything like that. It simply states that one of the hacker operations "is considered the work of the Russian military intelligence service of the GRU." And CrowdStrike is not at all sure about who this hacker group works for, but believes that "the Federal Security Service, the FSB may be its employer."

Of course, the problem here is that none of them have solid evidence of the involvement of the Russian government, and especially Putin personally, in the attack on the National Committee.

Nakashima 15 Jun added her first material on this topic with a message that the hacker, nicknamed Guccifer 2.0, took responsibility for hacking the network of the National Committee of Democrats. In an interview with Vice Motherboard, Guccifer 2.0 said that he was not Russian, but Romanian:


- And where are you from?
- From Romania.
- Do you cooperate with Russia or with the Russian government?
- No, because I do not like the Russians and their foreign policy. I hate being classified as Russian.
- Почему?
- I already said why! I have done a lot, why do you praise them?

However, the Washington Post 20 published another Nakashima material under the heading "Cyber ​​experts confirm that the Russian government hacked into the network of the National Committee of Democrats." There, Nakashima does not take into account the statement by Guccifer 2.0 that he is Romanian, and writes: “Analysts do not have solid evidence, but they suspect that Guccifer 2.0 is actually part of one of the Russian hacker groups that penetrated the National Committee ".

And at the very end of his article from 20, June, Nakashima notifies the reader: “It is also possible that someone else, not just Russians, has penetrated the network of the National Committee of Democrats and has access to the same documents.”

All of the above cannot be considered a surprise, as unsubstantiated accusations against the Russian state and the Russian president have been a thriving media industry in America for several years now. And if this industry has a leader, then this is the Washington Post. In addition to his reports on the hacker attack on the National Committee of the Democratic Party, this newspaper one after another publishes stories that Donald Trump is supposedly close to the Russian Federation and maintains links with it.

17 June this edition has published an article in which he claims to have studied "Trump's financial ties with Russia and his unusually flattering words addressed to Vladimir Putin." The author claims that Trump's relationship with Putin and his positive views on Russia are "one of the most interesting aspects of the presidential campaign," since "the overwhelming majority of American political leaders and heads of national security agencies claim that Putin is a pariah." But how do we link this statement of reporters with the fact that Secretary of State Kerry regularly meets with the Russian foreign minister, and President Obama periodically talks on the phone with the pariah itself? Apparently, the reader himself must guess about this.

Nevertheless, this message on the principle of "guilty of complicity" says: "Since 1980-ies, Trump and his family members have visited Moscow many times in search of favorable business opportunities." Apparently, it means that Trump is among strangers, a stranger among his own. At least, this is the picture that develops in the inflamed imagination of the Washington Post's editors. Despite its many flaws, businessman Trump is no different from other American and Western business captains, who are just looking for favorable opportunities in Russia. Is it possible to imagine that the Washington Post will blame William Browder for his former business contacts and operations in Russia?


According to the Washington Post, it is even more alarming that "the Russian ambassador to the United States, acting contrary to the tradition that diplomats stay away from domestic policy, was present in April in Washington at Trump's foreign policy statement." It is not clear what tradition the newspaper refers to, but if it exists, then the American ambassadors violate it regularly. For example, the US ambassador to Ukraine, Jeffrey Payette, in December 2013 attended anti-government protests in Kiev along with Undersecretary of State Victoria Nuland, and in numerous reports, former US Ambassador to Syria Robert Ford (X.UMX) was reported appeared at anti-government gatherings in various parts of Syria.

And 18 June Washington Post published an article by Ishaan Tharoor, who referred to the material of the newspaper for the previous day about the alleged closeness between Trump and Putin, and noted that "the former star of the reality show also certainly tacitly endorses some Putin's statements." For sure. Also. Silently. In the words of former CIA director George Tenet, this is a “win-win” option.

But the Washington Post is far from the only publication where non-documented sensational materials about Russia are published. The British newspaper The Telegraph, which 21 June asked, asked the stupidest example: “Or maybe Vladimir Putin is conducting Russian football hooligans to push Britain out of the EU?” In this article, which many American publications echoed, it is stated that “organized Kremlin hooligan antics isolate England and can lead to the expulsion of the national team from the championship, which will add firewood to the Brexit fire. " The authors presented absolutely no evidence that it was the Kremlin that “organized hooligan tricks” in Lille at the European Championships (which are in any case a kind of English hooliganism).


The results of the British referendum have not yet been announced, and journalists have already shouted about the alleged involvement in this case of Russia. Neuton scientist Max Boot (Max Boot) 19 June shot a warning message from the pages of the Washington Post (and where else?), Stating to readers: “The leader of the UK Independence Party and Brexit’s leading supporter Nigel Farage speaks sharply about Brussels, but exceptionally warm about Moscow. "

After the vote, the media went astray, trying to tie the results of the referendum to the actions of "Kremlin agents". A very telling article was published by the always boring media portal BuzzFeed, declaring: "The main winner of Brexit is Vladimir Putin." Former ambassador to Russia, Michael McFaul, who became a Washington Post columnist and foreign policy adviser to Hillary Clinton, told BuzzFeed that "Putin won the most from Brexit." According to McFaul, "Putin has been trying to split Europe for many years, including the EU and NATO, hoping for the collapse of European unity, as happened with the USSR and the Warsaw Pact a quarter of a century ago."

Meanwhile, the British Guardian said that Russia and for the flat account Iran "rejoiced" the results of Brexit. But the Russian president was not at all happy, but repeatedly declared on the eve of the vote about the neutrality of Moscow in this matter. However, the Guardian in its article only casually mentioned his words that Brexit could have “positive and negative consequences” for Russia.

Meanwhile, The Telegraph, in addition to its reports about the football hooligans raised by the Kremlin, published an article from the category of science fiction. The title claims that “Russia intends to develop teleportation in 20 years.” Well, the real "Star Trek". However, the text of The Telegraph doesn’t have anything like it, but there are only words about the “strategic development program”, which is “compiled for Vladimir Putin” and aimed at “developing teleportation to the 2035 year”. And nowhere is there a word that the Russian government is striving to carry out this initiative.

Of course, all this would be funny if the geopolitical consequences were not so ominous. An endless stream of unsubstantiated and very controversial charges without evidence draws Russia and its president in the worst possible light. It was he who led to such a deplorable state of affairs and to the dangerous situation in which we found ourselves.

While Russia continues to support separatist detachments in the east of Ukraine, NATO and American troops are concentrating in the west of this country, conducting regular “training sessions”. Meanwhile, before the next NATO summit, which will be held in Warsaw, less than a week remains. And while responsible politicians, such as German Foreign Minister Frank-Walter Steinmeier, condemn the NATO tendency to incite military hysteria, the impression is that as the summit approaches, the media are increasingly moving away from reality in their coverage of Russia.

Misinformation flowing from our media destroys the chances of detente between the United States and Russia, and the two nuclear superpowers are beginning to follow the course of a collision in Eastern Europe, in the skies over Syria, on the Black and Baltic Seas.

At such times, society needs fewer sensations and more fact-based reports about Russia and its power.

Ctrl Enter
Noticed oshЫbku Highlight text and press. Ctrl + Enter
We are
Overseas ally? Donald Trump - US Presidential CandidateSituational analysis of the death of the MH17 flight (Malaysian Boeing 777), made on the basis of engineering analysis from 15.08.2014
Military Reviewin Yandex News
Military Reviewin Google News
82 comments
Information
Dear reader, to leave comments on the publication, you must sign in.