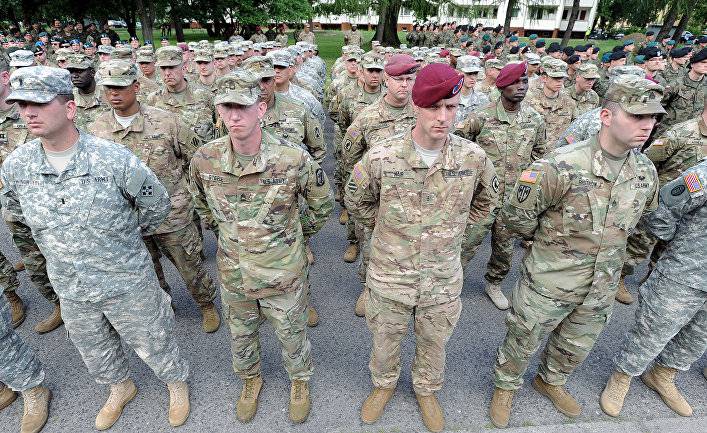 From 8 to 9 in July in the capital of Poland, Warsaw, an annual meeting of NATO allies' heads of state and government will be held, the goal of which is to evaluate the activities of the alliance at the highest political level and to put forward new tasks and initiatives.

It is expected that the NATO summit will only technically approve the agreement reached at the meeting of defense ministers of the Alliance member countries held in Brussels on June 9 in Brussels on the deployment of four battalion-wide combat groups in the Baltic countries and in Poland. One battle group will be deployed in each of the three Baltic countries, another is planned to be sent to Poland. A battalion-wide battle group is formed from 16 to one thousand soldiers. In turn, the question of which countries' soldiers in rotation will provide the battalion personnel will be discussed at the Warsaw summit. From this it follows that the political leaders of the NATO member states do not come together to discuss conceptual issues on the prevention of threats to the members of the alliance, but to talk about the technical solution, as the bases of the Baltic States and Poland will rotate Canadian, British and American soldier. That’s all.

It seems that the NATO summit from the discussion platform on issues of concern turns into a formal ritual, in which political leaders have only a ceremonial role. The sole task of the political leaders of NATO member states is to make previously prepared and agreed decisions legitimate by their presence.

But if the goal were to be put forward - the discussion by political leaders of the most important security problems, then the agenda of the NATO summit should be different. Perhaps it is time to begin discussions on changing the conceptual paradigm of NATO, which has been gripped by severe erosion. Since the creation of NATO, the United States has been the main security guarantor of this military bloc.

At a time when NATO was expanding eastward, new members of the alliance were promised guarantees in case of a possible external threat, but in return they were required to promise, if necessary, to firmly support US strategic and foreign policy interests. Before joining any Eastern European country to the NATO alliance, its society was tirelessly reminded of the benefits of this step, but it didn’t particularly emphasize that paying for this benefit would be mandatory participation in ensuring US national interests. So it happened. Eastern European countries are rushing to the embrasure, regardless of whether the United States has decided to invade Afghanistan or Iraq or simply want to impose a free trade agreement on Europe that is advantageous to its companies.

In turn, in the internal political discussions in Sweden on the possible entry into NATO, this is the most important issue. Will the need to support unjust, criminal or even clearly aggressive wars of the main ally - the United States - in the Middle East or in other geographic regions of acquisitions from US-guaranteed protection and security?

In addition, the myth that only the United States can guarantee the security of any state in any place is already in great doubt. Russia simply annexed a part of the territory of a neighboring state - that's all. The United States cannot do anything. No sanctions help. Years pass, and the Crimea remains part of Russia.

This raises a reasonable question, which of the security concepts is more effective - the concept that blindly relies on the omnipotence of the United States, or the so-called multi-vector policy implemented by Kazakhstan, China and other states? Unfortunately, the reality is that the only effective US actions against a nuclear state can manifest themselves in the use of nuclear weapons. weapons. But such a step is equivalent to the suicide of civilization. No rational-thinking person wants this, no matter in which country he lives.

If from a relatively quiet period Europe moves into an era of conflict, then the most important is the question of which country, territory or region the US Congress will be prepared to launch a nuclear war, and because of which country, territory or region it will not. If there are countries and territories because of which the United States confines itself to sanctions for several years, this means that the existing security system opens the way for regional conflicts, and it's time to think about another solution. Maybe NATO with absolute US domination no longer meets the security interests of Europe, and we need to look for solutions that are more in line with our interests? There are several alternatives to US dominance in guaranteeing security. It is the creation of a climate of trust between the EU and its neighboring countries, and the advance towards the EU’s common armed forces.

However, in all likelihood, there will be no discussions on these issues at the Warsaw summit. We will receive from the Warsaw summit one NATO battalion, which will instantly be designated as one of the main military targets of a potential enemy in the Baltic area in case a real conflict begins.