Sverdlov-type artillery cruisers: the last in the Russian fleet 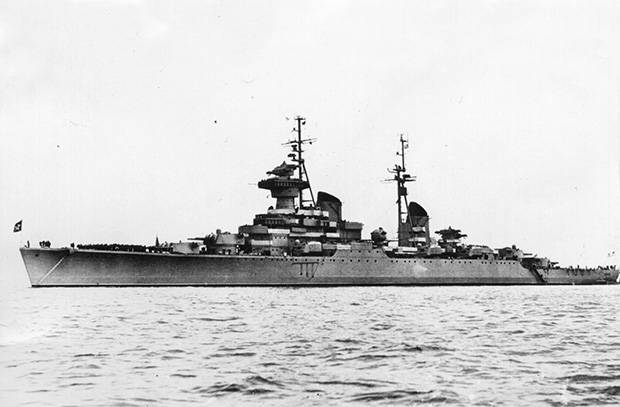 The cruiser "Sverdlov" at coronation celebrations at Spithead raid, June 1953.

5 July 1950 of the year launched the lead ship of the series, which became the basis of the surface forces of the Navy for two decades

Great Patriotic war on the USSR met with one of the largest fleets in the world: 3 battleships, 7 cruisers, 59 leaders and destroyers, 218 submarines, 269 torpedo boats, 22 patrol boats, 88 minesweepers, 77 submarine hunters and number other ships and boats, as well as auxiliary vessels. But during the four military years, the Soviet Navy suffered significant losses and therefore by the end of the 1940's was much weaker, having difficulty in ensuring the country's security at sea borders. Meanwhile, the former allies of the USSR were rapidly turning into his opponents in the Cold War, and above all the United States, which had the most powerful military fleet at that time. To compensate for the lag in this area, the first post-war military shipbuilding program of the Soviet Union was adopted in 1950, under which the construction of the largest series of domestic cruisers, the 68 bis project Sverdlov, began. It got its name by the name of the lead cruiser of the series, which was launched on July 5 1950.

Although the construction program fleet, in the framework of which the construction of 68 bis cruisers was carried out, was adopted in 1950, the tactical and technical task for the development of the project was issued three years earlier. But in general история Creations of cruisers - more precisely, at first they were called light cruisers, although they eventually became the largest ships of the cruising class in the Soviet Navy - the 68 project began at the end of the 1930's. Their actual predecessors were light chapaev-type cruisers, the first of which was laid back in August 1939. In total, before the start of the war, five ships of this project were laid and launched, but they were completed in the post-war years: all five were commissioned in 1950.

It was this project that the shipbuilders took as the basis for starting work on new, post-war artillery cruisers for the Soviet Navy. In fact, these were the last ships of such class and rank in the USSR, since the conditions of the Cold War required a completely different ocean fleet and completely different weapons - nuclear and rocket. But in the conditions of the post-war reconstruction of the country and the urgent development of that new fleet and new weapons systems, it was necessary to hastily arm naval sailors with at least defenses - and only then with offensive weapons. The Sverdlov project cruisers became such “defensive” ships.

However, the rush and some “obsolete” of the project did not prevent the Sverdlov-type cruisers from becoming the first warships in the history of Russian cruiser building that received an all-welded hull. The creators of the ships managed to develop and put into practice a system for welding thick and large-sized sheets of armored low-alloyed steel - and as a result, the time taken to build one cruiser was halved compared to the construction by riveting the hull. And it was possible to develop a new technique using the experience of both German shipbuilders who mastered armor welding well, and ... Soviet tank building, where similar technologies during the war years worked perfectly on tens of thousands of T-34 and other machines.

Since the Soviet Navy of the late 1940-x - the beginning of the 1950-x required a large number of new ships, and the technology to build the cruisers of the 68 bis project allowed them to be produced fairly quickly, the plans included building a series of 25 units. But in the end, only fourteen or six were built in Leningrad (in three plants: the Ordzhonikidze Baltic, André Marty and the Sudomeh plant), three in Nikolaev and two in Molotovsk (later renamed Severodvinsk). The ships received the names of famous naval commanders, military leaders, political figures of the USSR and cities: “Admiral Senyavin”, “Admiral Lazarev”, “Admiral Ushakov” and “Admiral Nakhimov”, “Alexander Suvorov”, “Alexander Nevsky”, “Dmitry Pozharsky” and “ Mikhail Kutuzov, Sverdlov, Zhdanov, Ordzhonikidze and Dzerzhinsky, as well as Molotovsk and Murmansk. More 11 cruisers were laid, but not completed, because the country's leadership has concluded that the fleet needs other ships. Five of them managed to be floated, four more only to be pawned, and orders for two more were simply canceled. 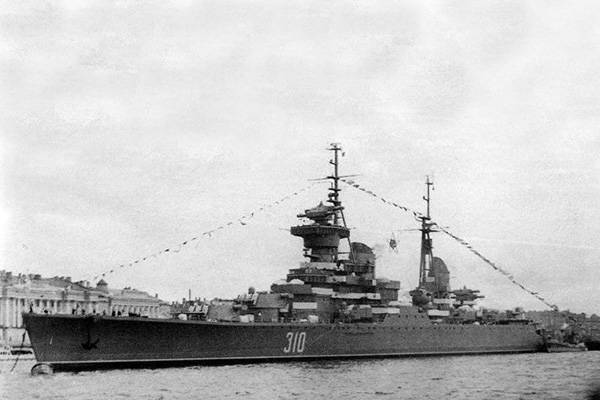 Despite the fact that the 68 bis project was largely pre-war, and cruisers were built under more than difficult conditions, they turned out to be strong warships that served in the USSR Navy for a long time. The shortest service fell to the share of the cruisers Ordzhonikidze and the Admiral Nakhimov - they were listed in the ship lists for 11 years. On average, the cruisers of the 68 project served for more than three decades, which is not surprising. After the navy was forced to write off the largest ships that remained in its structure from the times of the First World War - Sevastopol-type battleships, it was the Sverdlov-type cruisers that took their place. Although, of course, they were inferior to the battleships in their combat capabilities: the armament of these ships consisted of twelve 152-mm guns in four towers and twelve 100-mm guns in six twin-mounted units. In addition, sixteen dual 37-mm artillery mounts, designed for the air defense of ships, were located on board: the military and shipbuilders fully took into account the experience of the recently ended war.

Initially, all the cruisers of the Sverdlov project were distributed over three fleets: the Baltic, Northern and Black Sea, in accordance with the place of construction. But in the end, four ships - "Admiral Lazarev", "Dmitry Pozharsky", "Admiral Senyavin" and "Alexander Suvorov" - ended up in the Pacific Fleet, where they served until the end of the 1980's. And the longest fate fell to the lot of the Black Sea cruiser Mikhail Kutuzov. Unlike all the rest of his fellows, after the end of combat service, he was not sold abroad, he was not allowed to go on needles and left to rot in foreign waters (as Murmansk did not reach the customers). Written off last, in August 1998 of the year, two years later, he embarked on an eternal moorage in Novorossiysk, becoming a museum ship.

In the history of the combat service of the Sverdlov-type cruisers there have been many notable events. They made international visits, including in honor of the coronation of the Queen of Great Britain Elizabeth II (Sverdlov), went to distant raids in the equator area, watching American aircraft carriers, participated in the test programs of ship cruise missiles, helped the Egyptian fleet during the Arab-Israeli conflicts, rescued fishermen and victims of earthquakes, assisted the Soviet nuclear submarines that had suffered accidents ... For two decades, these cruisers became a real symbol of the resurgent Soviet Navy - and the core of its surface forces, until they were replaced by more modern, high-speed and better armed ships. But its role in the history of the Russian Navy cruisers like "Sverdlov" played, and significant. It was their honor to prove to the whole world that the Russian fleet suffered all the war that had just ended and is ready at any moment to repel any attack. That is, to give the country and its sailors and shipbuilders the time and opportunity to design and build the very novelties that the 68 bis cruisers have ousted from the battle fleet.