Addition in the "Beech" grove 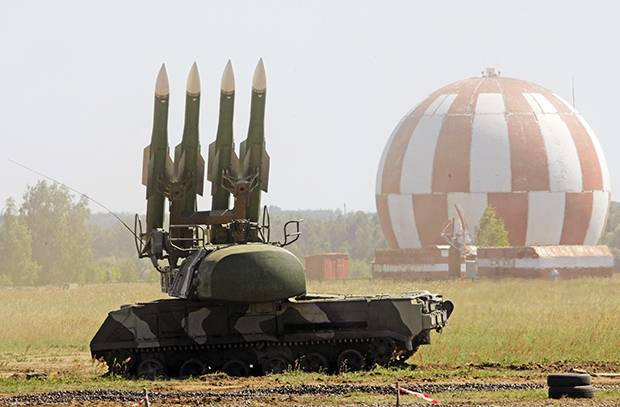 
The new Buk-М3 air defense system will be a reliable “shield” against the strikes of modern air attack weapons, including Tomahawk high-precision cruise missiles

The eternal problem of the sword and shield in our time is expressed, including in the confrontation between the means of aerospace attack (SVKN) and air defense (AD). This is also seen in the practical implementation of one of the basic philosophical laws - the unity and struggle of opposites. Whatever they say today about new species weaponsand the modern “sword” and “shield” will for a long time be the most important means of warfare.

The message about the successful testing of the Buk-М3 anti-aircraft missile system (SAM) will not leave indifferent both our Western "friends" and those who wish to use it to reflect their possible attacks. And there is something to pay attention to.

As the general director of Concern VKO "Almaz-Antey" Yan Novikov noted, on the tests of the Buk-М3 air defense system in a difficult air situation I hit a target - an imitator of a ballistic target. Earlier, the unique rocket of the complex, which is almost twice as large as the previous versions and has no world analogues in its class, was reported by the head of the military air defense, Lieutenant General Alexander Leonov. According to Novikov and the words of the head of the Ministry of Defense Sergei Shoigu, the new air defense system should be commissioned by the Russian army this year.

What is the Buk-M3 air defense system?

"Buk-M3" is the latest modification in the family of the now widely known in the world Soviet air defense system "Buk", the analogue for which was the short-range air defense system "Cub". The latter at one time was in service with many foreign armies as "Square", and in the USSR it was the main means of air defense tank divisions. Both complexes were created by the cooperation of domestic enterprises, headed by the N.I. V.V. Tikhomirov.

The “Buk” air defense system from 1978 was in service with the anti-aircraft missile brigades of the combined-arms (tank) armies of the Ground Forces. In the course of subsequent upgrades, its modifications Buk-M, Buk-М1, Buk-МХNUMX-1, Buk-М2 and their export versions were created. After the defeat of the Russian long-range bomber Tu-2М2 and the Malaysian airliner in the sky over the Donbas, the Buk-М22 system was particularly famous.

Later, the Buk-M9 317K2 air defense system was created, and its capabilities increased dramatically. An anti-aircraft guided missile (ZUR) 9М317 ensured the defeat of air targets in the zone up to 50 km and 27 km in range and altitude, respectively. The speed of the targets hit was increased to 1100 m / s, the possibility of simultaneous bombardment of 24 air targets, including cruise missiles at a range 17 – 18 km with a height of their flight 20 m, was provided. The probability of hitting targets reached 0,95. In 1988, the complex was put into service, but due to the collapse of the USSR, it was only in 2008 that he entered the army.

The new Buk-М3 air defense system became a deep modernization of the previous Buk-М2, its creation began in 2007 year.

Appointment and opportunities of "Buk-M3"

Buk-М3 SAM (9К317М3, according to the US / NATO classification SA-17 / Grizzly) is a highly mobile, medium-range multi-function fire weapon. The complex is designed to destroy all types of maneuvering manned and unmanned, including drones, cruise and ballistic missiles, aircraft (LA), as well as radio-contrast ground and surface targets under conditions of intense fire and electronic countermeasures of the enemy.

According to open data, the complex is capable of firing these types of air targets at ranges and altitudes of 2,5 – 70 km and 0,015 – 35 km, respectively. The flight speed of targets can reach 3000 m / s. By this and some other indicators, the Buk-М3 air defense missile system is comparable with the well-known long-range C-300PMU-2 air defense system. This ensures the defeat of the only US-guided operational-tactical missile MGM-140 ATACMS, the speed of which does not exceed 1500 m / s.

A high probability of destruction (0,99) of aerodynamic aircraft is ensured by the upgraded 3М317М missile defense system, the speed of which reaches 1550 m / s. The Buk-М3 complex is in service with an anti-aircraft missile battalion that is capable of firing 72 airborne targets at the same time with an 36 missile ammunition. The main elements of the new air defense system are: a command post, a target detection radar, six self-propelled firing (SOU) and three launch (SPU) installations, missiles.

Despite the preservation of the general architecture of construction and the principle of operation, a number of characteristic features allow us to consider the Buk-М3 air defense system as a new complex. With a constant total number of main combat elements on a track or wheelbase, the combat capabilities of the new air defense system changed dramatically. Here are some of them.

“Buk-М3” is created on a modern digital element base. Reducing the mass and overall performance of the missile made it possible to place it in the transport-launch container, which protected the missile defense system from external influences and increased their number from 4 (8) to 6 (12) on self-propelled fire installations. As a result, the total transportable stock of missiles ready for battle doubled (from 36 to 72), which is of particular importance in a short-lived anti-aircraft battle and in the reflection of massive air strikes.

According to the press service of Concern VKO "Almaz-Antey", during the tests, the new rocket "almost twice" surpasses the previous versions in terms of technical characteristics and has no world analogues among the anti-aircraft missiles in its class. She hit all types of targets that imitated airplanes and helicopters, tactical ballistic and strategic cruise, including anti-ship with a height of flight within 5 m, missiles.

The new missile is equipped with a combined guidance system with an active radar homing head (GOS). In conjunction with thermal imaging means, it ensures that at any time of the day and in any weather, the capture and further tracking of the target in automatic mode. In other words, the principle of “shot and forget” is implemented. This also provides high-precision guidance of missiles to high-speed, highly maneuverable targets and high overall survivability of the complex in the conditions of active electronic and fire resistance of the enemy.

Powerful high-explosive fragmentation warhead (warhead) provides a reliable defeat of these types of air, ground and surface targets. The damaging elements of the warhead in the form of sharpened rods and the original system of its detonation do not leave the target a chance to escape "alive" from this rocket. On tests, striking elements were punched even by structures made of titanium alloys.

The launch of the missile, which was reported in 2015, significantly reduces the reaction time of the complex from the moment the target was detected to the launch of the missile. Gas-dynamic rudders, control system, high own flight speeds and maneuverability, as well as resistance to overloads suggest the possibility of direct kinetic destruction of a target (hit-to-kill principle). The reason for this are the reports of almost 100-percentage (at least 0,9999) probability of hitting targets.

Increasing the ability to simultaneously fire on the targets of each SDA in 1,5 times increased the performance of the entire complex. In a difficult financial and economic environment, the unification of the rocket, which can be used by the shipboard Uragan air defense missile system (export version “Calm”), is of no small importance.

Known and unknown for obvious reasons, the capabilities of the air defense missile system allow us to draw the following rather unpleasant conclusions for our “sworn friends”.

The Buk-М3 troop-type air defense system together with long and short-range complexes (C-300 and Tor-М2), as well as direct cover (Tunguska air defense missile system, Igla air defense missile system, etc.) provide a reliable all-height protective umbrella »Groups of troops and objects from air strikes. Of particular importance is the fact that the Buk-М3 can be used as an essential element of the missile defense of the middle line within the framework of the general echelon air defense / missile defense system of Russia.

The creation of such a complex, especially in the current very turbulent and unfavorable military-political situation for Russia, is the undoubted success of the national defense industry. In modern conditions, the means of aerospace attack and combat against them have become decisive in the armed struggle, therefore it is necessary to equip our army with such means in the required quantity as soon as possible.