July 8 2016
20
One of the promising projects for the development of military equipment for the armed forces moved to a new stage. According to the domestic press, the next stage of testing a promising armored personnel carrier, built on the basis of the unified wheeled platform "Boomerang", has begun. After completing all the necessary checks, the new combat vehicle must be put into service by various types of troops in need of such armored vehicles.


On the continuation of work on the project "Boomerang" and the beginning of testing the new 7 armored car in July reported the publication "Izvestia". The publication received comments on the progress of the project from the official representative of the developer. According to Sergei Suvorov, representing the “Military-Industrial Company”, preliminary tests of a promising armored personnel carrier built on the basis of the Boomerang platform have begun. It is reported that the new machine is amphibious and is able to move both on land and on water. Thanks to this, in particular, it is possible to supply new equipment to both ground forces and naval infantry.

The project of armored vehicles based on the Boomerang platform is called “an absolutely new word in the family of Soviet and Russian wheeled armored personnel carriers”. Unlike its predecessors, the new technique is built on the basis of a common platform with a number of characteristics related to modern requirements for such machines. This simplifies the creation and construction of new equipment, and in the future will lead to simplified operation of the front-line machines. The existing vehicle technology of the Boomerang family is said to be similar only to the wheel formula. From the point of view of other design features, this is a completely different technique. 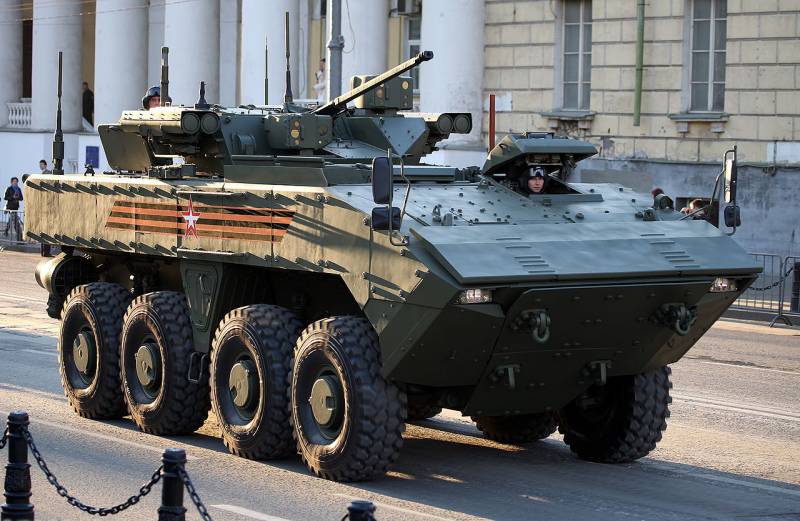 It is noted that one of the main goals of a promising project is to increase the level of protection of equipment against threats in the form of various explosive devices. The old domestic armored personnel carriers did not have sufficient protection of this type, which led to corresponding negative consequences. In the framework of the new project, the task of mine protection was one of the main ones. In addition, the booking of the corps, which is responsible for protection from firing from a small weapons and small-caliber artillery or shell fragments.

Details of the current preliminary tests have not yet been clarified. Probably, the prototype "Boomerang" went to one of the landfills, where it is planned to check its driving performance and evaluate other characteristics. What exactly is happening now - official sources are silent.

In this case, there is some information that allows to build assumptions about the course of current tests. A few days before news About the beginning of preliminary tests in a free access there appeared several amateur photos of great interest. At the very beginning of July, in one of the streets of Nizhny Novgorod, a tractor with a tanker trailer carrying a Boomerang armored personnel carrier in a curious configuration was captured.

The greatest attention in the published photographs is the equipment installed behind the combat module of the armored personnel carrier. A special unit with two curved pipes for intake of atmospheric air was mounted on special slots of the roof of the prototype case. Such equipment allows to build assumptions about the objectives of current tests. There is reason to believe that an experienced armored vehicle was involved in tests on the water.

In this case, the armored personnel carrier had to move through the water with the help of two jet propulsion, originally envisaged by the project of a unified platform, and the pipes on the roof provided air supply to the habitable compartments and to the engine without the risk of flooding the intakes with water. Whether the prototype BTR was brought to the landfill or returned to the plant after inspections is unknown, but even without this information new photos are of great interest.

It is noteworthy that the possibility of an armored vehicle crossing water barriers by swimming, as well as the installation of jet propulsion units were originally provided for by the technical task. At the same time, from some published data it follows that the authors of the project did not immediately succeed in “teaching” the armored personnel carrier to sail. So, a few weeks ago, the management of the Military Industrial Company told that at present, work is underway on introducing new materials, primarily steel alloys, into the Boomerang project, aimed at reducing the weight of the structure and improving performance afloat. It is possible that these works were basically completed, which made it possible to begin testing experimental equipment in a modified configuration on water.

The development of the unified wheeled platform “Boomerang” project started at the beginning of this decade. The objective of the project was to create a platform suitable for use as the basis for the development of new equipment for various purposes. The creation of the platform was entrusted to the “Military Industrial Company” and a number of related organizations. For example, for the manufacture of new technology are responsible "The plant buildings" (Vyksa) and Arzamas engineering plant. The main part of the design work was completed in the first few years. In 2013, for the first time, a model of promising armored vehicles was shown for the first time to military officials and government officials.

The first public demonstration of technology built on the basis of the new platform was held on 9 on May 2015 of the year during a parade on Red Square. Then the cars were shown in the configuration of armored personnel carriers with appropriate equipment and weapons. The Boomerang family cars again took part in the 2016 parade of the year.

In mid-April, the development organization reported that a test program for the new armored personnel carrier was currently being implemented. Existing machines of the “Boomerang” family must pass the entire range of checks before the end of the current year. After completion of the test machine can be put into service. The start of serial construction of new equipment is scheduled for next year. At the same time, the first samples of armored personnel carriers may enter the troops, although mass deliveries will begin later. 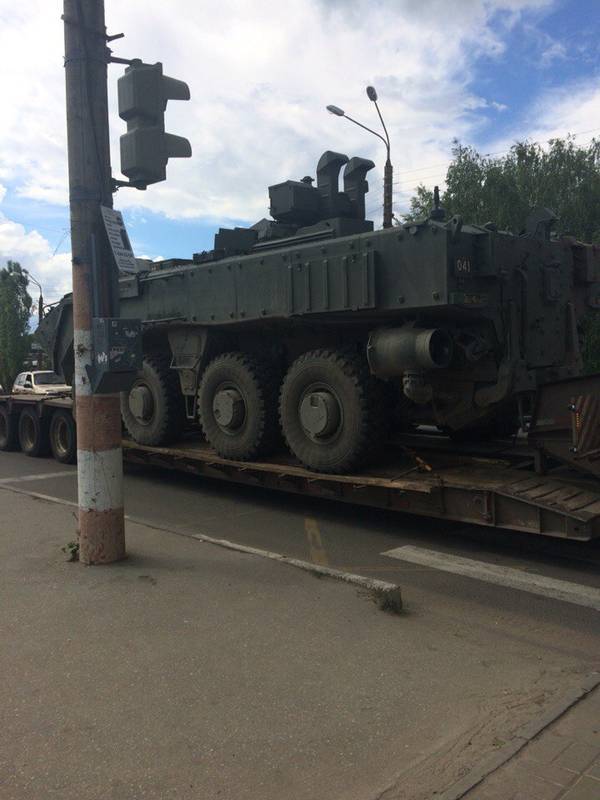 The unified platform MIC-7829 "Boomerang" is a four-axle wheeled armored vehicle, the design of which is created taking into account the possible use as a basis for equipment for various purposes. For this purpose, in particular, the layout of the internal volumes with the front placement of the engine compartment, next to which the control section is located, is non-standard for domestic armored personnel carriers. The armored body of the machine was created using the latest developments in the field of protection systems, so that it can withstand firing from small arms or small-caliber artillery systems, as well as undermining explosive devices under the wheel or bottom.

According to reports, to date, "Military Industrial Company" has developed two versions of military equipment based on the platform "Boomerang." These are the K-16 armored personnel carrier and the K-17 wheeled infantry fighting vehicle. The differences between these two models are in the different composition of the equipment and different weapons. At the same time, the main characteristics, both tactical and technical, and operational, are on the same level.

The main tasks of the new family of vehicles are the transportation of personnel and support of the landing force with fire when participating in combat operations. For this, the machine is equipped with a three-dimensional troop compartment in the aft part. Unlike previous domestic armored personnel carriers, the Boomerang should land fighters through the stern ramp, which allows them to be covered from enemy fire with the entire vehicle body. There are also hatches in the roof.

The most noticeable external differences between the two versions of the armored vehicle relate to weapons. Thus, depending on the modification, the Boomerang can be equipped with two types of remotely controlled combat modules. A system with machine-gun armament and a set of smoke grenade launchers, also equipped with optical-electronic equipment for surveillance and guidance. An alternative to the machine-gun module is the Epoch / Boomerang-BM system. This combat module is large and carries a more serious weapon system. It is installed 30-mm automatic gun 2А42, 7,62-mm PKTM machine gun and launchers of guided missiles "Cornet". Both combat modules are controlled from the operator’s console located inside the reserved volume.

Armored vehicles based on the Boomerang platform, of at least two types, will go into mass production in the foreseeable future and will be supplied to the troops. Start of mass production is scheduled for next year. Full rearmament of the army is scheduled to begin by the end of the decade. New equipment will be transferred to the ground forces, as well as, according to recent reports, to the marines. Having received new armored vehicles with enhanced characteristics, various units of the armed forces will be able to increase their potential, as well as to abandon the operation of obsolete technology that does not fully meet modern requirements.

According to the latest media reports, one of the stages of testing new equipment is currently being conducted, which, among other things, may include testing on water. The completion of one or another phase of testing brings the moment of adoption of "Boomerangs" into service. This event will have to happen in the foreseeable future.