Brothers and sisters in trouble and in victory

July 10 2016
17
In a record short time after the start of fascist aggression, the Soviet Union became a single military-political and economic springboard. This was greatly facilitated by Stalin’s radio performance on July 3 on 1941. 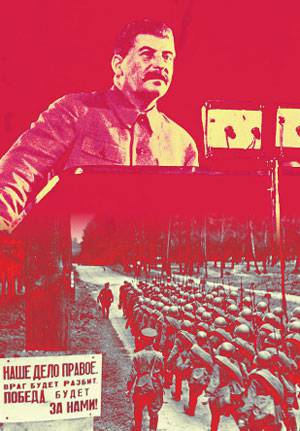 Started with the words "Brothers and sisters, my friends!", It showed: the supreme Soviet power together with the people knows what to do, unlike, for example, from the leadership of France, who lost control over his country and military actions a week after the Nazi invasion.

Stalin’s appeal unreservedly confirmed: our country is absolutely united in its solidarity and confidence in the Victory, which, according to the head of state, consists not only in repelling aggression, but also in helping the people temporarily enslaved by the Nazis.

This radio broadcast, published the same day by Pravda, had a tremendous impact on the country and impressed the world. The President of the United States, the prime ministers of Great Britain, Canada, Australia, and the leaders of many other countries responded to the appeal to the Soviet people. Stalin's words “all the best people of Europe, America and Asia see that our cause is just, that the enemy will be defeated, that we must win” were heard in all corners of the planet.

“The performance of Stalin on July 3, on the whole calm, but quite clear, showed that it took less than two weeks for Moscow to organize the military-industrial and economic restructuring of the country as a whole. The Soviets are confident in their abilities and understand that the strategic circumstances push Britain, the British Commonwealth, the United States and its allies, albeit less powerful, on a par with the USSR. This means the creation of a very broad and effective coalition, which was hardly expected in Berlin and in the Axis countries in general, ”Radio Leopoldville stated in the Belgian Congo on the same day.

“Calculations on the“ stir ”in the Kremlin and the change of power are clearly not defended: the performance of Stalin on July 3 is proof of that. Moscow by this time realized that this war was not at all local, which Stalin noted. He called for the consolidation of the whole country in the name of victory, and he could not be heard. Stalin's speech is a well-thought-out program of resistance to aggression and victory over the aggressors. We fought with the Italian occupiers for six years (from October 1935-th to May 1941-th. - A.Ch.), the war in Russia will probably last as long, but it will certainly end in victory over the aggressors, "4 reported July" Abyssinia Radio.

“The speech of Stalin on July 3 showed that the leadership of the USSR was by no means at a loss, it was capable of debugging the front and rear and had built an integral concept of warfare. Moscow was overwhelmed by excessive hope for the “peacefulness” of Berlin in relation to Russia, but the restructuring of the political and military thinking in the country happened quickly. Stalin’s speech also showed that there can be no “second” Brest peace and the war will continue until the complete defeat of Germany, ”the Iraqi British war news said on July 5.

The Stalinist definition of war with Nazism as Patriotic immediately entered into circulation and was accepted by the masses. The significance of the appeal for the mobilization of all the forces of the Soviet people to repulse the enemy was already understood both here and abroad. The people felt, and the world learned that Moscow, despite the gravity of the situation, was confident of victory.

Ctrl Enter
Noticed oshЫbku Highlight text and press. Ctrl + Enter
We are
Diplomats of the People's Commissariat of Defense: on the eve and during the warMyths of the Great Patriotic. Did Stalin have prostration in the first days of the war?
Military Reviewin Yandex News
Military Reviewin Google News
17 comments
Information
Dear reader, to leave comments on the publication, you must sign in.