July 8 2016
28
Today, London poses as a victim of circumstances, that is, a Brexit referendum. But Berlin and Paris only grin in response, they do not believe a word of foggy Albion: such decisions cannot be by the will of some “circumstances”. 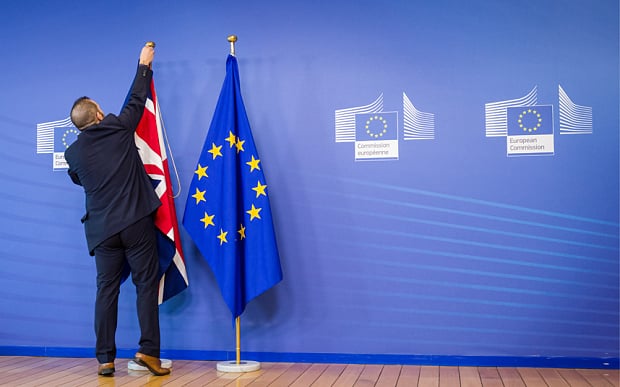 The European Union has demanded that Britain not delay the exit, he does not at all persuade London to think again and find a way to reconsider the decision of the referendum on leaving the EU. Brussels, in general, strongly indicates to London the door, and this suggests that the EU leadership was expecting and preparing for Brexit.

Interestingly, Paris takes the lead in punishing London. An intelligent Hollande suddenly declares to Cameron: “The decision has been made. It cannot be delayed and canceled. ” European Commission President Jean-Claude Juncker expelled Cameron from the last EU summit after the first day of meetings. So, the EU made a decision: Britain is no longer a place in the European Union. Now London can alone join the Transatlantic partnership with the United States, in fact, Brexit was held for this. The European Union did not succumb to the transatlantic flattery of London and Washington ...

But official Berlin, that is, Chancellor Merkel, is almost the comforter of London, by the way, like official Washington. But these are all crocodile consolations. All this is a game ... On the one hand - Washington and London, and on the other - Paris and Berlin, in the "good" and "evil" policeman. Both sides know that the other side knows who and what game is playing ... Only simplicity is at a loss, players make new bets.

Boris Johnson, the ex-mayor of London, an ardent agitator of the exit of Britain from the European Union, declares the new “British values”, we note, not democratic or European, but simply “British” ... Just some British Stalin some, it turns out, this Boris Johnson ...

Brussels urgently collects the Old European, the founding member of the EU, and discusses with them some plans, without the Young European. Naturally, Poland is most outraged, and already suspects the “old Europe” of wanting to federalize everyone in the new “super-state,” and deprive the latter of the rights of their young members. Observers in one voice say that now Poland will represent Washington and London in the European Union, and inform them about his state of health. By the way, in the Second World War, it was Britain who threw Poland under a Hitlerite rink, wouldn't she really throw it today?

Interestingly, only the Anglo-Saxon, or transatlantic, press continues to replicate the nonsense that Brexit is Putin’s plan, and we must already defend Britain from Putin. Rate the degree of insanity: after all, then Cameron, the initiator of the referendum, and his government, are Putin's agents! However, the senile is dangerous, like a mad man with a razor ... "Old Europe" is probably also why it pushes its marasmatic neighbor away to the Atlantic Ocean, for its own safety.

But, in general, the position of the European Union is becoming increasingly unenviable. On the western flank, either Britain has fallen off, or has gone mad. And obviously at the urgent request of Washington. On the eastern flank, the EU’s relations with Erdogan’s Turkey deteriorated sharply, while Russia improved relations with Turkey, and this reduced tension on its southern borders.

Russia created, in fact, a no-fly zone over Syria, and this destroyed the Turkish plans in Syria. On the other hand, the United States supported the supply weapons Kurds, Turkey considers this simply a betrayal by the Americans, an attempt to stir up a civil war in Turkey. In the aggregate, these two circumstances prompted Erdogan to normalize relations with Russia, apologize for the downed Su-24 plane and the dead pilot, with all the circumstances following from this.

Another aspect of normalizing relations is important for Russia: Turkey is changing its policy in Syria, and in relation to ISIL: there were arrests at ISIL bases in Turkey! This seems to be the cause of the ISIS attack at the Istanbul airport. One can even expect a normalization of relations between Erdogan and Asad, the long-standing strategic goal of Moscow ...

In fact, Washington, through its policy of creating "controlled chaos" in the Middle East, destroyed the eastern flank of the European Union and NATO, in which the Turkish gap is now gaping ... Europe found itself in a situation with open western and eastern flanks, from the south it is threatened by a military fire in Libya, speech There is already about sending there Italian military units.

On the northern border of the European Union - the newly formed neo-fascist Bandera regime, which calls itself for conspiracy "Ukraine", stuffed with American "advisers". The fascists, from love to hate, are one step ... The European Union probably understands that, with its multiculturalism, it cannot be an exception to this imperative.

Within the European Union, Americans are stirring up a rift between old and young Europeans. What does all this mean? It seems that the destabilization of Western Europe has begun, so the founders of the European Union urgently insulate their compartments: the EU ship will not be able to take all the "Europeans" on board.

The United States, as the mythical Minotaur, is preparing to swallow the European Union transatlantically, shattering it into small pieces, since it refused to sign the Transatlantic Partnership. The first such piece was Britain, who will be next?

Paris and Berlin unite, so as not to disappear one by one, and gather around them those who can be trusted, the old European guard, and they anticipate clashes with the Young-Europeans. The blame for all this will be, of course, Putin, who refused to put Russia on the dinner table of the Minotaur ...

Ctrl Enter
Noticed oshЫbku Highlight text and press. Ctrl + Enter
We are
What worried European politicians who spoke about the crisis of the European Union?Brexit forever
Military Reviewin Yandex News
Military Reviewin Google News
28 comments
Information
Dear reader, to leave comments on the publication, you must sign in.