We break the cast concrete with an iron pipe!

July 12 2016
55
Probably everyone saw the footage shot from the air, which shows the Syrian cities that have become the scene of hostilities. At first glance, everything is terrible - broken glass, demolished brick walls and partitions. But look: they themselves are at home! The roofs are intact! New walls set, the windows glazed, the holes in the bullets and fragments plastered and ... live! Because these houses are all made of cast reinforced concrete. There is a photo where the concrete roof slid down from such a house, as the columns on which it rested collapsed, but it slid down entirely! So, from the point of view of the defenders of this house, it is even good that it happened so! 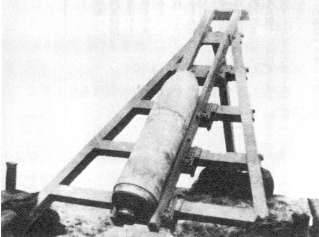 Type 4. Japanese launcher for 400-mm rockets. But there were rod mortars of the same caliber.

Well, now frames with the destroyed cities of the period of the Second World War - what is there? And there, if the walls are, then without a roof and floors between the floors! Why? But because at that time they were built according to the technology of the Middle Ages: they erected walls of brick, and the ceilings were installed from wooden beams. The bomb falling from above often pierced through them, and exploded in the basement, causing people to hide in special bomb shelters, which again had a concrete ceiling, or in the subway. The fire destroyed the interior of the house from the bottom to the top, and usually it was impossible to do anything. 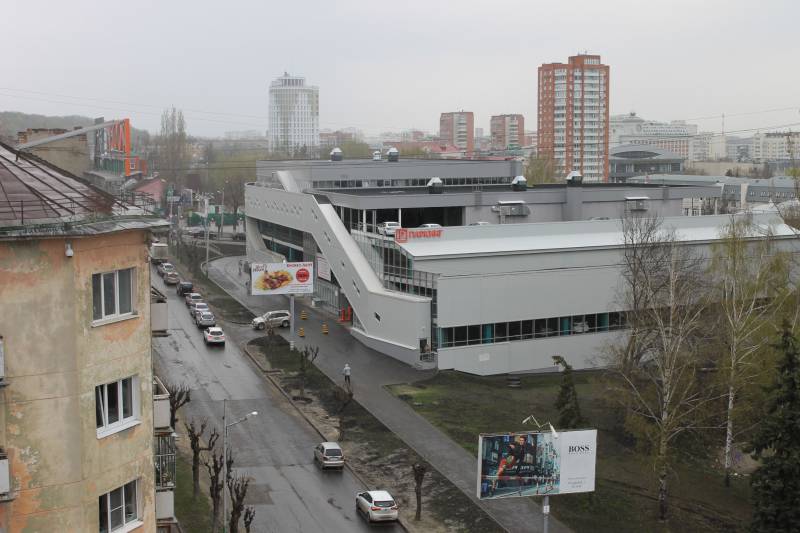 Solid concrete building - parking in the center of Penza.

What now? Well, yes, fragments cut the beloved sofa and the TV, smashed the glass (by the way, why did nobody stick them inside and outside with adhesive tape?), Which is uncomfortable in the apartment during the cold. However, to fix these "destruction" of labor is not. The morale of people such a "evil" also can not break, and what we have in the end? A waste of resources! 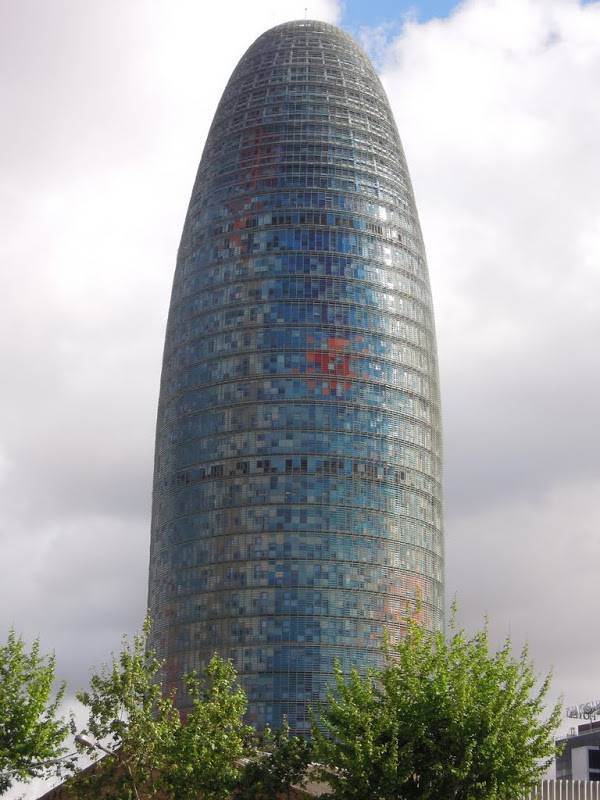 And this is the "Tower Akbar" in Barcelona. Office center. And also solid concrete. Glasses from the shelling, of course, fall out, but you try to "pick it up"!

Meanwhile, already during the First World War, the howling powers were armed with their armies with heavy guns of 305, 320, 406, 420 and even 500-mm caliber, capable of penetrating a three-meter reinforced concrete plate with their shells!

Today, the ultimate caliber in artillery of the Russian army is 240-mm (self-propelled mortar "Tulip") and ... everything. Next come the MLRS with a caliber of 300-mm, but that's all, again. Meanwhile, it is obvious that a projectile with a caliber of 406-mm and a weight of 800 kg, of which, say, 250 kg will fall on explosives, with the very first impact it will destroy any brick house to the ground, and the structure of cast reinforced concrete will cause serious damage. In any case, his defenders will not be well! 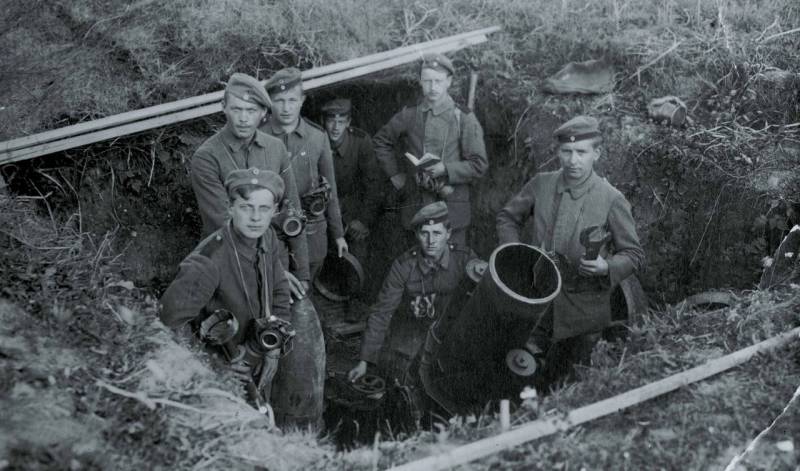 This is a caliber! But the First World ...

True, today mobility is at the forefront of all military doctrines. But there are quite successful examples of the use of such powerful shells in the years of the last war, and in a completely "mobile" way. So, the German army used the “251” armored personnel carrier with six rockets mounted on the sides, 280-320-mm caliber with incendiary and high-explosive warheads. The Japanese used jet mines of caliber 220, 305 and 400 mm in a very original way. They were launched from tray and rod launchers. The latter was a crate of logs or sleepers, laid on the slope of the pit. In the center, a launch tube was installed on triangular struts and ... that's it! A 400 mm mine was put on the pipe, and the pit itself was carefully masked. Typically, such "mortars" were installed on the islands, and were shot at a water edge. Once the American landing Tanks-amphibians rushed to the shore and went out of the water to the beach, followed by a volley of shells like this and the shore turned into a sea of ​​raging fire and disrupted steel. Not without reason, during the assault on the atoll of Taraw, the sanitary vessels did not have time to evacuate not so much even the wounded as they had gone insane!

The German Sturmtigr was also armed with an 380-mm jet mortar, which threw shells weighing 350 kg for five kilometers (5700 m). There is a case when, with one shell, this installation destroyed three American Sherman tanks at once and, of course, this vehicle was indispensable in street battles while crushing the same Warsaw Uprising. 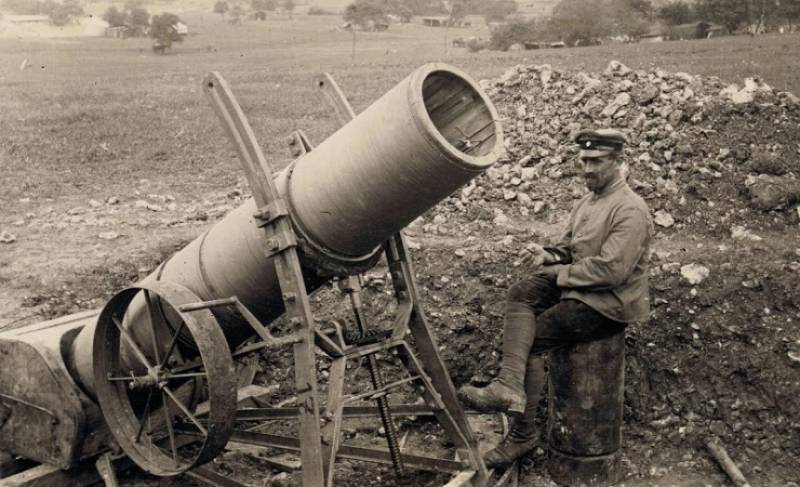 And here is another interesting development, and even earlier, of the period of the First World War: the 240-mm wooden German mortar “Albrecht”. Already the first tests showed high efficiency of this weapons, so almost immediately after him, the production of the older brother “Albrecht” in caliber of 350-mm, and then the 450-mm mortar, to which the prefix “gros” was added, was launched. 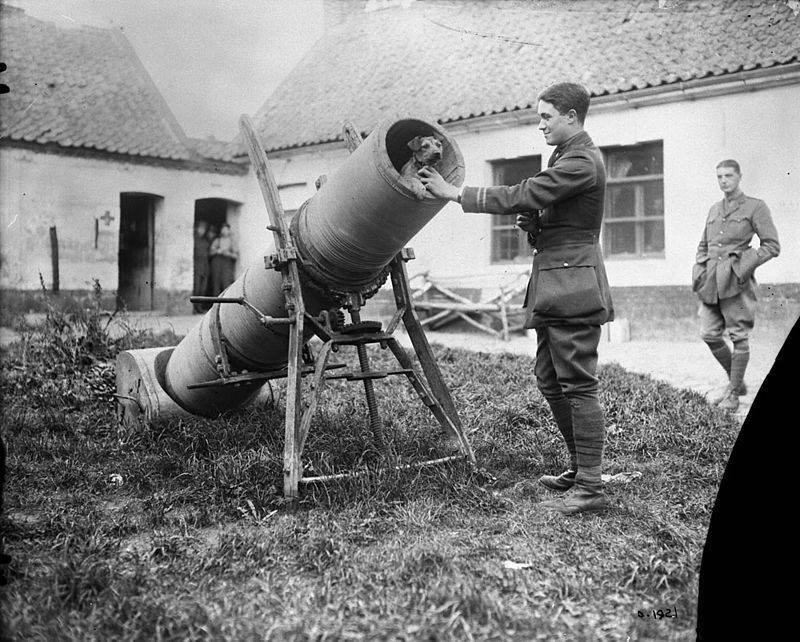 Albrecht mortar captured by the British. September 1917 of the year.

It was necessary to shoot from such mortars not with ordinary mortar mines, but with cylindrical bombs with very thin walls of a very primitive design. The firing range was only about 600 meters. Not far, but what a projectile fell on the enemy’s heads! So, the mine for the Albrecht mortar weighed 100 kilograms (of which 60 accounted for explosives!), But the grosAlbrecht projectile weighed all 200, and 114 were for TNT! Recall that a caliber growth of 2 times respectively increases the projectile volume by 8 times. And for comparison, we note that the mass of the explosive charge aviation FAB-250 bombs are only 100 kilograms, and how much does it take to deliver these kilograms to the target? And now let’s imagine that this German mortar, as it should be, is made of the corresponding metal and ... what kind of shell is it and at what distance will it be thrown? And this is very important to calculate in this case, because today the situation is repeating to some extent. 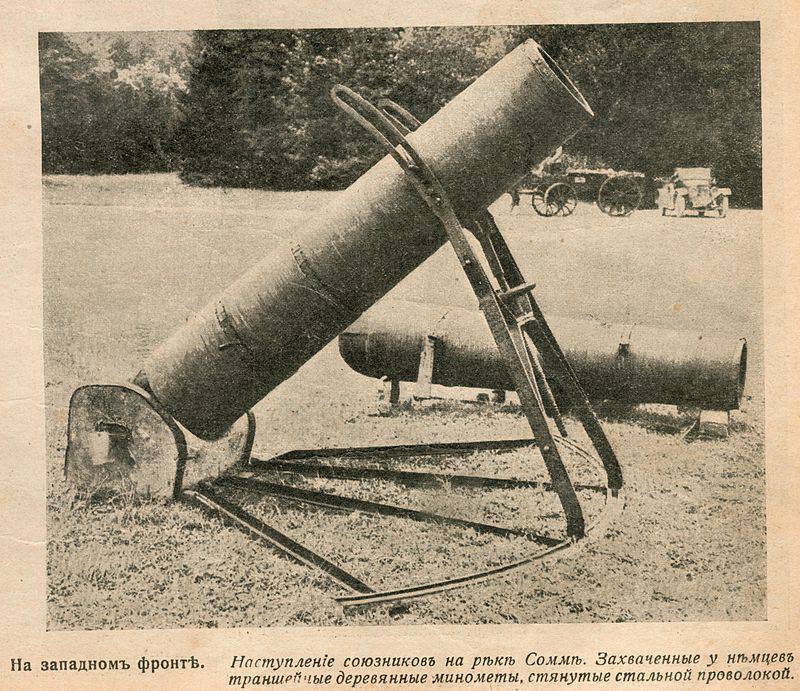 German wooden mortar. Photo from the magazine "Niva". Replace wood with steel and ...

The roof of the building from solid concrete perfectly protects both the first and second floors of it from 120-mm. Shells 122 and 152-mm howitzers, falling at it at an acute angle, again can not do it. Under the blunt - leave a hole comparable to its caliber or a little more, that's all. It is enough to be not on the second, but on the first floor of such a building, so as not to fear such shelling. It is clear that a flat-fired shot can be made on a single building, but in conditions of dense urban development (as in Syria, for example), making such a shot is very, very difficult. It's easier to lose both the shooting tank itself and the SPG.

What is the way out of this situation? Back to large calibers already at a new technical level! Take a rather banal situation today. There is a road in front of us, and on the road just one kilometer away is the so-called checkpoint. It was built of concrete blocks and covered with concrete slabs, and in what way would it be best for us to destroy with just one shot? We drive up to it ... a one-time metal barrel of caliber from 280 to 305-mm on an extremely lightweight three-wheeled chassis and with the simplest sighting devices designed for a direct shot range. Install, direct and scatter who where. Then - bang! And the huge projectile flies in one direction, and the cart with the barrel “flies” to the other, and the main thing is that there is no one there! But the projectile of the appropriate mass and with the appropriate charge sweeps from the ground any checkpoint, be it at least three times from concrete blocks and twice covered with concrete slabs. If necessary, you can install this barrel at an angle and then the range of the shot will increase accordingly. You can bury it in a hole and shoot it. The main thing is that even a car will be able to tow such a “supergun”, and it will not be possible to disguise it at all. That is, in fact, a disposable shooting tube ... and that's it! 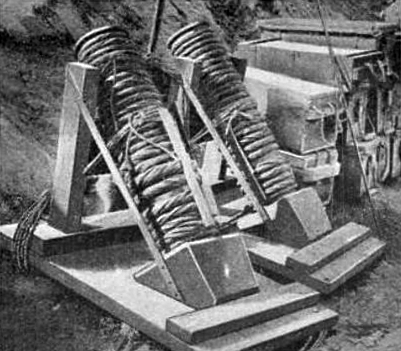 Even easier can look made on the basis of the same ordinary metal pipe, now no longer disposable, but reusable large-caliber pin-type mortar. The basis of the mortar under the mine caliber 400-mm and a height of human height or so, and in this case will be all the same steel pipe, sharpened at one end. Practically - a cylindrical pile! A vibrator-penetrator clogs it in the ground, which is put on and fixed on it, and the required angle is set using a triangle-lodgement. The pipe itself is screwed together in place of two, which makes the entire installation extremely compact: two parts of the pipe, a penetrator and a lodgement, and this one mechanism can serve not one, but many such pipes. 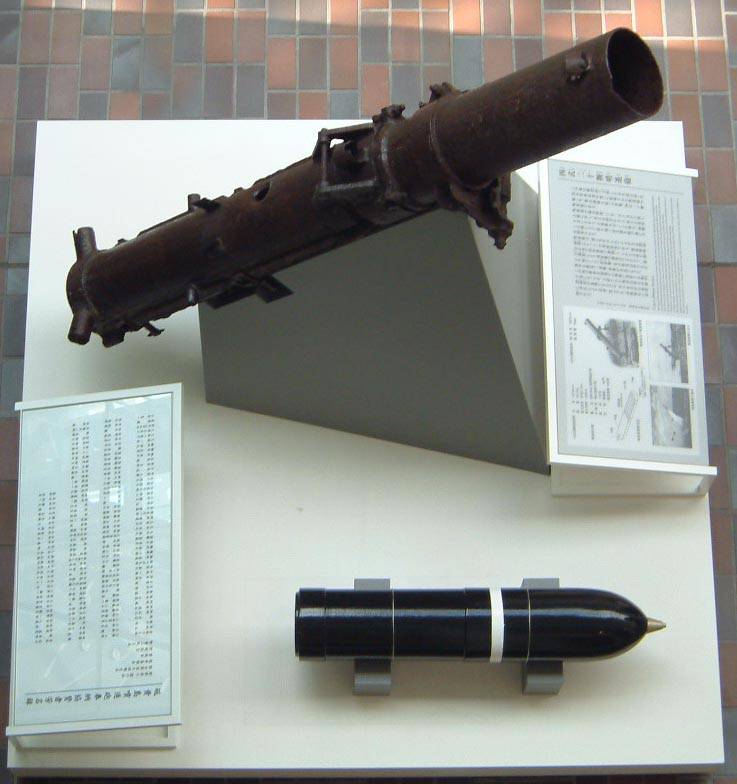 Japanese mortar "Type 4" caliber 203-mm and projectiles to it.

They scored and got ... an "obstacle field" of pipes inclined towards the enemy. But after that, a mine is put on each such pipe, and they all connect to the control computer. Mines can be of two types: the first one is unmanaged and non-rotating, with guidance from a drone in the vicinity of the target. In the first case, a block should be provided on the mine for promotion with obliquely spaced nozzles of the type of Segner wheel. At the time of launch, this unit spins the mine, after which the main engine starts, and the mine goes to the target. At the same time, it will be enough for her to climb only 3-5 km, so that when falling from there she will acquire high speed and corresponding shock power. Such a mine at the expense of its mass and speed will pierce through any concrete floor of a modern building and explode at its base. In any case, after such a strike, it will not stand! As for the "pipe", then it is not a pity, because the metal on it is used the very second grade! By the way, such shells can also be used against enemy field fortifications from their own trenches, why not? 15 thousands of fragments, flying at a distance of up to two kilometers, will tear off the attack of any enemy in this area! As a result, cast concrete - pipe!