NATO minus one, or Berlin is between Lisbon and Vladivostok ...

July 8 2016
36
On the eve of the German parliamentarians came together in another battle over relations with Russia. The stumbling block this time was Germany’s membership in the North Atlantic military bloc and the nebula of its purpose there. Representatives of the Left Party of the Bundestag came up with a truly loud initiative to abandon NATO anti-Russian phobias imposed by the US administration and money bags from Wall Street and move on to building relations within a single Eurasian security system. Systems "from Lisbon to Vladivostok." It is worth recalling that exactly the same idea was voiced at the time by Vladimir Putin, proposing to abandon confrontation for the benefit of partnership relations both in the security sphere and in the economic sphere.

The leader of the German movement “Left” (or “Alternative for Germany”), Sarah Wagenknecht, gave an extensive interview to Russia Today TV channel, during which she expressed her thoughts about the fact that NATO had long ago lost its security guidelines and today exists only thanks to the anti-Russian force being forcibly imposed ideology. At the same time, Sarah Wagenknecht criticized the participation of German soldiers in NATO military exercises near the borders of Russia.

RT cites a statement by the leader of the German opposition movement, which over the past few years has gained a lot of popularity in Germany:

I believe that to conduct such maneuvers (near the borders of the Russian Federation - author's note) with the participation of Germany after 75 years after the war of extermination, which Germany began against the then USSR, is oblivion stories. Therefore, in our opinion, there is absolutely no excuse for these maneuvers, we consider these maneuvers to be an anachronism.

I will say this: US interests are fairly transparent. After all, their hegemony, their domination in Europe are based precisely on this frightening picture that we need to be protected from Russia - this finds the widest support. Why it now finds support in Eastern Europe and in certain parties to such an extent is not quite clear to me, because Eastern Europe itself will be among the victims if it comes to military escalation.

At the end of the interview, the leader of the Left Party added:
I believe that, judging by the way the alliance is now behaving, it is in fact the biggest pest. A few years ago, Helmut Schmidt clearly said: “Today, a great threat comes from the United States, rather than from Russia.” Unfortunately, this is true. When I now observe the course of the presidential elections in the United States (...) when the White House will be ruled by either a half-madman or a puppet of the arms lobby, this threat will not diminish compared with today. And that is why we need more independent European politics. We do not need a performer of the will of Washington.

Against this background, the next, forgive, bleating of German Chancellor Angela Merkel that NATO’s policy towards Russia is “defensive in nature” was ridiculed even in Germany. According to Merkel, “for example, Poland is extremely concerned about Russia's actions.” And therefore, - as Merkel stated, - Germany, as part of NATO, should “act in the format of deterrence and dialogue, pursuing a purely defensive policy”. These statements by the German Chancellor regarding the Russian Federation published a magazine Focus.

In the German segment of social networks, a considerable number of users were surprised by the fact that Germany was suddenly worried about Poland’s concerns given the fact that recently Berlin itself had repeatedly expressed concerns that Warsaw was taking steps that were contrary to EU standards (for example, attempts to control MASS MEDIA). Representatives of the German opposition at the same time stated that the same Poland would have no concerns regarding Russian policy if: a) independent politicians, not American puppets, worked in the leadership of Poland, as well as in the leadership of Germany, b) instead of the anachronism, which is NATO, a unified security system on the European continent began to be built, including the Russian Federation as well.

The idea of ​​the German opposition about contacts with the Russian Federation in terms of creating a unified security system was eventually formulated by representatives of the Bundestag Committee Alexander Noah. His words leads the news agency Sputnik:
The resolution’s idea is as follows: we don’t need NATO, instead we need a collective security system from Lisbon to Vladivostok. This week we will formalize it.

Alexander Noi noted that the initiative is being discussed before the NATO summit in Warsaw, and against the background of the summit itself, the German Left organized large-scale protests against Germany’s membership in the North Atlantic Alliance. 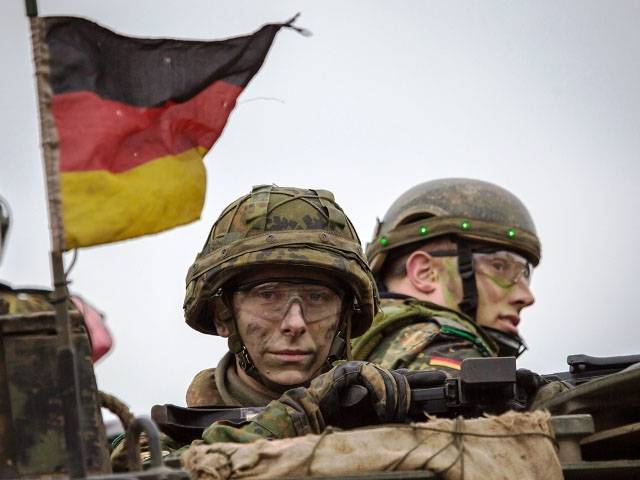 It would be possible to stop there, stating that the German “Left” will not, by definition, allow an initiative for Germany’s withdrawal from NATO, and therefore the resolution will remain in paper form. However, after the famous case of Brexit (the exit of Britain from the European Union on the basis of a referendum), it can be said with confidence that the saying “never say“ never ”” works in the political sense as well. Moreover, taking into account the fact that the German “leftists”, along with representatives of the party Marine Le Pen in France and the League of the North of Italy in Europe, are suspected of “ties with the Kremlin”, the situation is quite capable of leading to a precedent regarding NATO. Well, it just so happens that in the West any tendencies that do not meet the interests of Washington are customarily suspected of personally having ties with the Kremlin and Vladimir Putin ...

What are the representatives of the German opposition focusing on? The fact that, firstly, the NATO ideology makes Germany one of the first targets for a retaliatory strike by Russia, and secondly, the fact that Germany still remains virtually occupied territory. If from the beginning of the 2000s the size of the American military contingent in Germany began to decline, now the US occupation contingent is returning to its usual format at a steady pace - up to 50 thousand troops at several German military bases, including land, naval and aviation. Given such American forces in Germany, it is simply foolish to consider the policy of the current German authorities independent. In addition, the fact that the average German taxpayer, in addition to millions of refugees from the Middle East and North Africa, is forced to “help” the United States in supporting the US military, who have settled “rooted” in the FRG from their own funds. So far, the average taxpayer, perhaps, with a “backward mind” understands that his taxes do not always go where he needs to, and that American “defenders” are still defenders ... And the goal of the German Left movement today is to that this “backward mind” of German taxpayers grew into real German logic and pragmatism.

Against this background, the words of the Ambassador of the Russian Federation in Germany, Vladimir Grinin, expressed in an interview with the newspaper "News". According to Grinin, it is simply impossible to build a world order system without Russia's participation. According to the Russian ambassador, even the representatives of the German federal authorities speak out about the actions of NATO at the borders of the Russian Federation as provocative. In particular, the head of the German Foreign Ministry, Frank-Walter Steinmeier, who can hardly be suspected of sympathizing with Russia, called the NATO maneuvers “Anaconda” “a provocation that is not beneficial to balanced relations.”

So is it possible that Germany in NATO (or outside NATO) will create a precedent for building a unified security system "from Lisbon to Vladivostok"? As one of the factors that may ultimately speak in favor of this, one can cite the following: after Britain’s withdrawal from the EU, Germany becomes an unequivocal European locomotive. At the same time, the burden on the repeatedly mentioned German taxpayers increases. In addition, the NATO format provides for 2% of expenditures from the German budget, including for servicing the American occupying contingent. With all the power of the German economy to pull such a burden, and even try to take into account the "concerns" of Poland and other Baltic states towards Russia, Berlin may not be able to do. But still, you want - you do not want, serve the American debt, fulfill the requirements of the American courts in relation to German companies (as an example, exaggerated scandal with the “exhaust” of Volkswagen), support anti-Russian sanctions, send your troops to the Baltic countries, Syria and Iraq .. In general, the "Alternative for Germany" has a lot of chances to bring to the German minds the fact that Germany is used as a pony horse, whipped up by the whip in the hands of the overseas owner. And that from such a prodding the horse can even "hover" with its hooves ... But if they bring it to the minds, then even Brexit will look like a child's toy for the West ...

Gypsy girl German girl with the exit ... from NATO. Why? But what if?..