"Submarine of the Future"

July 11 2016
43
People always wanted to know about their future. That is why fortune-tellers and psychics are not translated in the world, who try to anticipate it by the hand, playing cards and crystal ball. How true their predictions are is their conscience. Scientists (and journalists!) Act differently. They take a number of variables they know today. Approximately imagine the dynamics of the process of their changes. And ... transfer these variables, adjusting accordingly, to the future. For example, a lot of very accurate predictions made by Jules Verne. But the fact is that what he predicted was necessary for people. So it appeared. Even on the moon, people flew, that's just not the way he wrote about it. 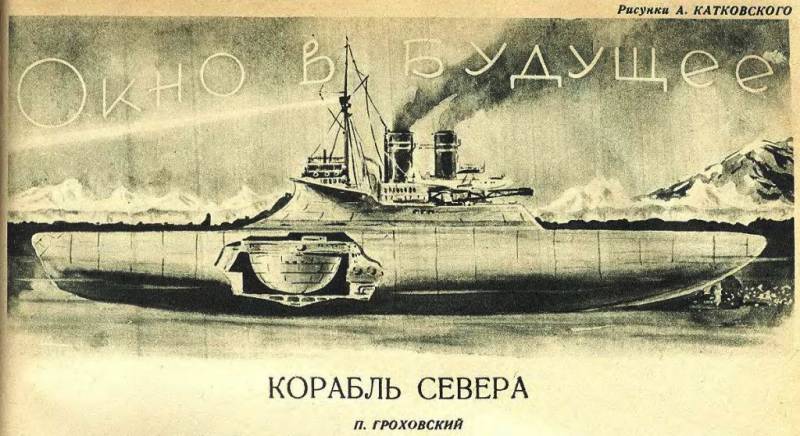 One of the projects of the “submarine of the future” from the magazine “Youth Technique” 1941.

In the past, the magazine "Technique of Youth" often wrote about the prospects for the development of science and technology. For example, about what will be in the future submarines. One of these articles appeared in this journal at the end of the 30s, and ... let's get acquainted with how the predictions of its author have come true.

The story of what the future submarines of the future should be. The author A. Tarasov begins by referring to the disasters that have just occurred with the American submarine Skvalus, the English Tethys and the French Phoenix, whose crews could not be saved. 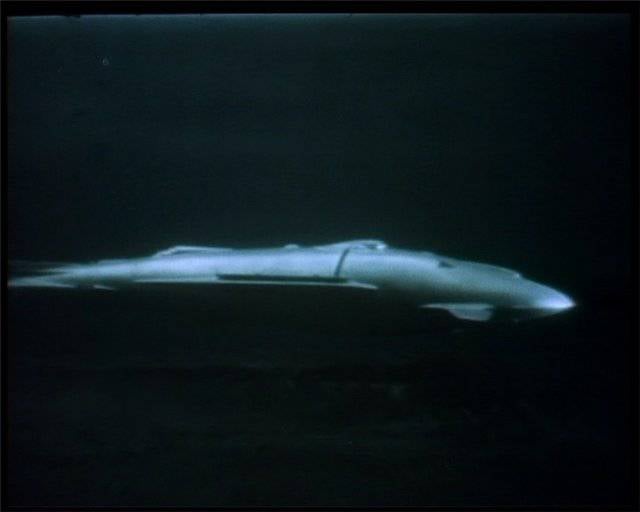 But this is truly the legendary fantastic Soviet submarine "Pioneer" from the movie "The Mystery of Two Oceans", filmed in 1955 year after the novel of the same name by G. Adamov, written by him in 1938 year.

That is, in his opinion, it was necessary to start improving submarines from the creation of new, and much more reliable means of salvation. In his opinion, it should have been a special underwater vessel, the presence of which greatly facilitated and accelerated rescue operations. It seems to be a good idea. But why has nobody implemented it? Yes, simply because for years to keep such a ship "under steam" is very expensive. And besides, its speed is still limited, and it may not be easy to reach the place of the tragedy, which can be anywhere! 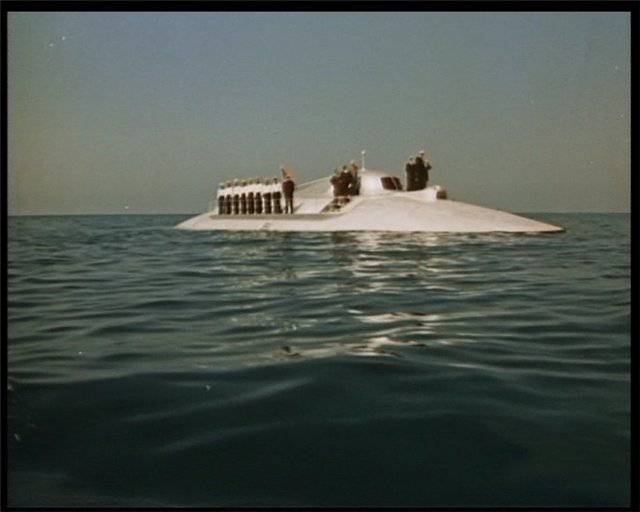 "Pioneer" on the surface of the sea.

Further, the author wrote about such a possible use of the submarine of the future as conducting ice exploration to her and using it as an icebreaker (!), Paving the caravans of ships along the ice on the Northern Sea Route. They say that the idea of ​​studying the Arctic with the help of a submarine is not at all new, it was proposed by the American polar explorer Hubert Wilkins. He tried to get to the North Pole on the submarine "Nautilus", but he failed due to the breakage of the depth rudders.

In any case, it was obvious to the author that his modern submarines did not meet the diverse tasks that they faced, and therefore a new ship was needed to cope with all of them.

And this is what he proposed: a universal submarine, which in the future was to solve almost all the tasks named by it. Therefore, it must, above all, have a streamlined body capable of providing high speed, both on the surface and under water. But ... then for some reason he needed the "skis" mounted on the deck and turned upwards by the runners, and even on the shock absorbers! But to prevent the boat from hitting the ice from below - that’s why, and also, so that there, under water, it would slide along it on these skis! 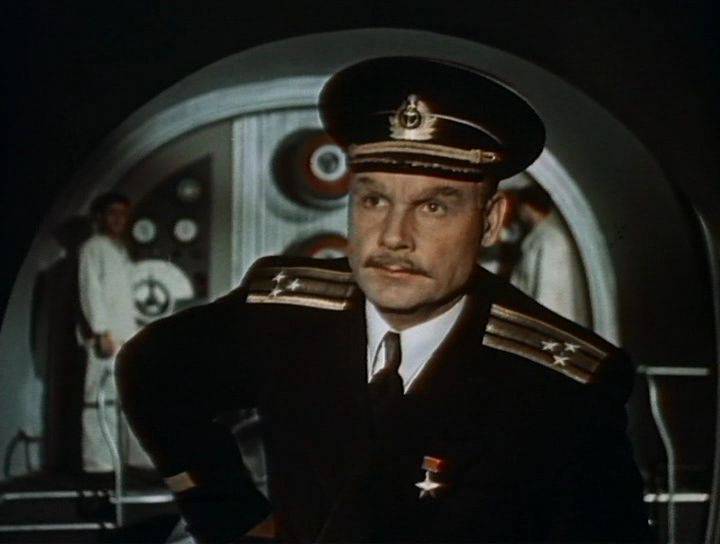 The commander of the "Pioneer" - well, just "darling"!

However, skiing protruding above the deck is not all. Next, the author had the idea to come up with four retractable hatches, and for some reason not round, but elliptical. But in reality, these are no hatches, but autogenous ice cutters! Of them, upward beats a strong flame, and ... it melts the ice, and the boat floats! How, where and how much fuel will be stored for these cutters, the author, of course, does not indicate. Do not care about him and the topic of consumption of this fuel for melting ice. But on the other hand, he did not forget to write that all these four "apparatuses" are being advanced by a special hydraulic device. "Special", that is, well-known specialists. Well, he doesn’t know what these devices are and describe them naturally.

Further on the deck, he invented another, now “big hatch”, also in the form of an ellipse, leading inside the boat to the “hydraulic chamber”. If necessary, certain “special rescue vehicles” should be thrown out of this chamber, which, together with people, independently float to the surface. This is a kind of "underwater parachute." And also in the form of an ellipsoid. Something ellipse, apparently, struck the author's imagination, and maybe the word "beautiful", but only something around him ellipses. The device accommodates two people. That is, inside the boat of theirs, that eggs in fish. But it is technically simpler - and time has shown that it is so, that it is more technological to make one large pop-up camera than a lot. The material is aluminum, although the pressure at the depth is best maintained by steel, but the funny thing is that people in these capsules "are tied to the walls with belts", because, rising to the surface, "the device can be turned over." But they still have a center of gravity so that the hatch is always on top, to exit the “vehicle” after lifting.

Near the hatch of the hydraulic chamber on the same deck there is also an access hatch - this is indeed not the author’s deck, but solid “hatches”, but for some reason none of the editors of “TM” have this blatant stupidity for some reason then noticed Further, searchlights and portholes were installed all around the boat, but what about without them, because everyone read about Captain Nemo's Nautilus. “Rays from several searchlights can intersect and give intensive illumination in the right direction” —that is, all this “illumination” can also be turned, and how can we speak of some kind of streamlining and reliability of this boat? Around the "skis", hatches, turning spotlights, and on the deck there are also three periscopes.

At the bottom of the boat, the author proposes to arrange a redan — a projection that allows it to develop high speed! Yes, of course, on the surface of the water, boat boats are distinguished by their speed data. But this is not a boat. However, the author sees the exit in the installation of four aircraft engines on the forked ship, which transform this vessel into a high-speed glider. And before diving, they are cleaned in two hatches on the stern. One wants to ask whether there is anything left behind the hatches or not, because along the sides of this boat there are also two hatches. One to exit the divers, and the other to enter! And in the bottom there are two retractable "cylindrical towers." They boat tightly pressed against the hull of a sunken submarine, autogenous burns two holes in it and rescues his crew through them. 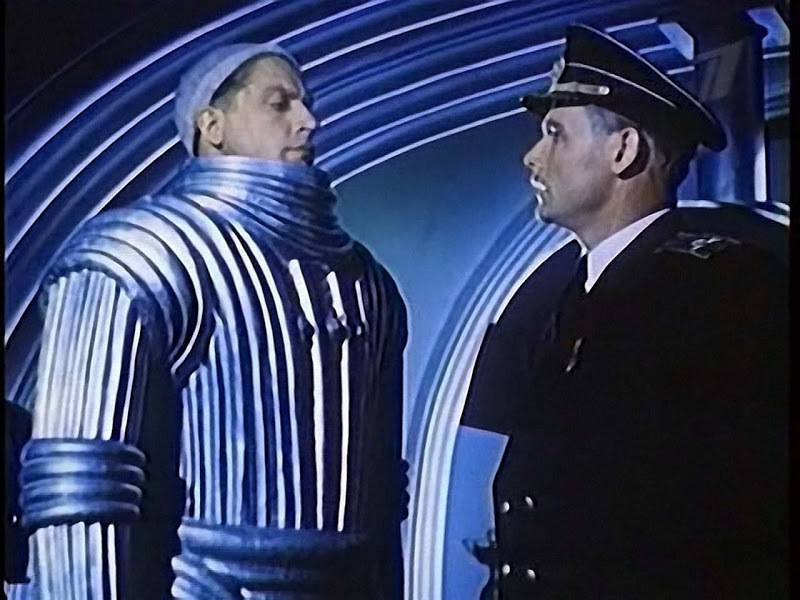 Compared with all the other entourage, the most impressive in the film are the suits for the crew ...

Well, inside this “universal boat” one could even dance. In the nose are the cabin of the commander and navigator, a research laboratory, then a canteen, then an inlet diving chamber and even ballast tanks for diving and lifting this “super ship”.

Next, it houses the notorious “hydraulic chamber”, autogenous devices for cutting ice, then the chamber for diver's exit, divided by gateways - partitions - into compartments so that in each subsequent pressure rises. It is so proposed to deal with caisson disease. 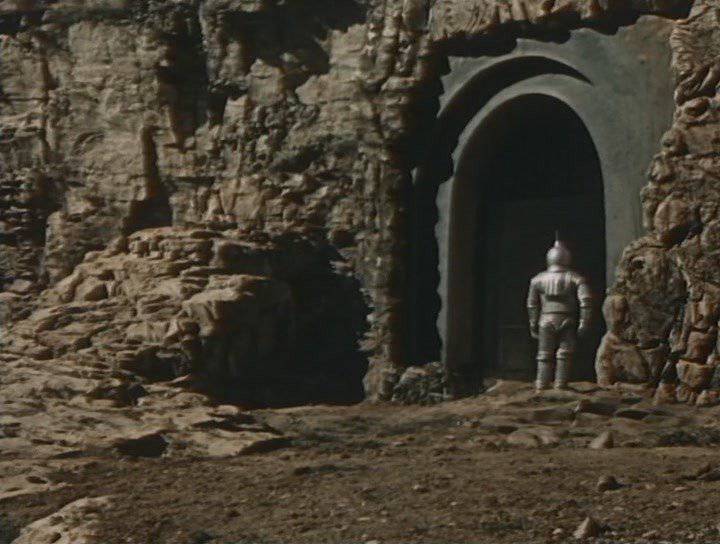 In the novel, the crew of the boat is fighting the Japanese imperialists and even drowning the Japanese cruiser Izumo with an ultrasonic gun! In the movie, a positive hero, pursuing the vile spy of Gluzsky, who has beaten his sibling (!), Falls on the secret torpedo base of an unnamed enemy, the entrance to which opens the password "17".

And here, in the center of the ship, it’s already impossible to understand where the radio room, the crew cabins and the ladder to the deck are located. The engine room, of course, is in the stern, but there are also aircraft engines, an air purification chamber and lower "sliding towers".

That is not the boat turned out in the end, but ... a solid "sieve" or hatches. However, the author put a lot of credit on them, they say, there are a lot of hatches - in case of an accident the crew is easily evacuated and can rise to the surface. That is, the universal submarine invented in the article was equipped with an impressive array of various devices for performing the widest range of tasks. 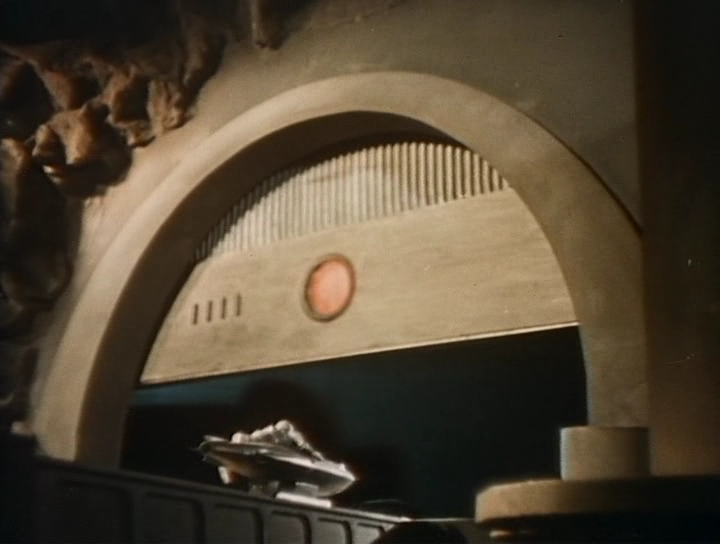 Equipped with this base, well, just no worse than the aliens. Also ... fantasy without measure!

And now let's see what it was - fantasy as the greatest value or an empty fantasy, like take a little more and make it “better”. Unfortunately, the last. And it’s a pity that such technically illiterate materials even at that time appeared in TM quite often.

However, it is clear that it is very difficult to rise above your time, create in your imagination some new reality and come up with technical innovations for it. But look at another such “boat” - the submarine “Pioneer” from the fantasy novel Grigory Adamov “The Mystery of Two Oceans”, written by him in 1938 year. With all the fantastic "Pioneer" such absurdities, like hatches at every turn and aircraft engines aft, it is still missing ...

Ctrl Enter
Noticed oshЫbku Highlight text and press. Ctrl + Enter
We are
NASA: "How We Get Back To The Moon"To Mars through the Moon
Military Reviewin Yandex News
Military Reviewin Google News
43 comments
Information
Dear reader, to leave comments on the publication, you must sign in.