Another political fever in Abkhazia

July 7 2016
47
The first July week showed the presence of a hotbed of tension in neighboring Abkhazia. And this is against the background of an increase in the flow of Russian tourists to this Caucasian republic and very active Russian-Abkhaz interaction on a whole range of issues: from military-technical to transport.


The boiling point is the idea of ​​the current President of the Republic of Abkhazia, Raul Khadzhimba (or rather, the idea of ​​the opposition, as if adopted by Khadzhimba) to hold a referendum on holding early presidential elections. Residents of the republic this coming Sunday (July 10) are invited to the sites for will, where they can answer the only question of the plebiscite:

Do you consider it necessary to hold early presidential elections in the Republic of Abkhazia?

According to representatives of the Abkhaz authorities, the referendum should show the level of public support for the current president, and if this level is low, Raul Khadzhimba "may resign" for 3 year before the end of the presidential term.

As soon as the current President of Abkhazia announced the preparation of the country for the July referendum, one of the parts of Abkhaz society boiled up - the one that is called opposition-oriented. The organizer of the "boil" - the party "Amtsakhara" ("Tribal lights").

The “summer” referendum (and the idea of ​​holding a referendum as such belonged to the opposition) seemed to opponents of Raul Khadzhimba as an attempt by the acting head of the republic to wreck a real plebiscite against the background of when the majority was distracted by the type of summer earnings for Abkhazia - receiving and serving tourists from Russia. Representatives of opposition circles stated that holding major events of a political nature at the height of the holiday season would lead to an extremely small proportion of the population coming to the plebiscite, and President Khadjimba, whose popularity level (according to the Abkhaz tradition) after the second year of leadership of the republic is enough low, will be able to continue to preside (until 2019 year).

Why was the phrase “according to the Abkhaz tradition” used in the previous paragraph? And it was used because Raul Khadzhimba himself came to power two years ago practically on the wave of a coup after the then opposition (it belonged to Khadzhimba in the year 2014) demanded reforms and the resignation of representatives of the highest authority. The opposition’s constitutional council (of course, there is not a word about the presence of such a body in the republican constitution itself) declared itself the highest authority - against the background of political protests of one part of the local population, which expressed dissatisfaction with the activities of then-President Alexander Ankvab. Ankvab himself decided not to escalate the situation and, under the pressure of the then opposition, in whose ranks Khadzhimba resigned. After that, Raul Khadzhimba became the new Abkhaz president.

Now the Abkhaz political wheel, having made only a part of the complete turnover, again ran into a similar situation. A certain part of the people again expressed discontent, on the streets and squares of Sukhum - meetings with the demands of political and economic changes. The most popular slogans are the decriminalization of the situation in the republic, the fight against corruption, the resignation of the head of the Ministry of Internal Affairs. At the same time, the opposition demanded from the current government to postpone the referendum from July 10 to autumn - at a time when the holiday season ends, bringing most of the funds to the republican budget. Then, according to the opposition, the turnout will be high, and Khajimba will have to participate in the early presidential elections, where he, as they believe in the “Amtsakhara” camp, has little chance.

The main demand of the current Abkhaz oppositionists is the resignation of Khadzhimba himself. He is accused of having violated the promises made in 2014 during the election campaign for constitutional reform “with an eye” to strengthen the role of the government and the parliament. Another accusation of the current Abkhaz president is the lack of formation of the coalition cabinet. True, in this case, the representatives of “Amtsakhara” are pretty crafty, if only because there are those politicians in the camp of the Abkhaz government who were part of the headquarters of competing Raul Khadzhimba during the presidential election of 2014 of the year. In general, rational and feasible demands layered on populist demands, and the case in the solar Black Sea republic again reached open confrontation between two parts of society.

So, on Tuesday, people appeared in the Abkhaz capital with Molotov cocktails in their hands. 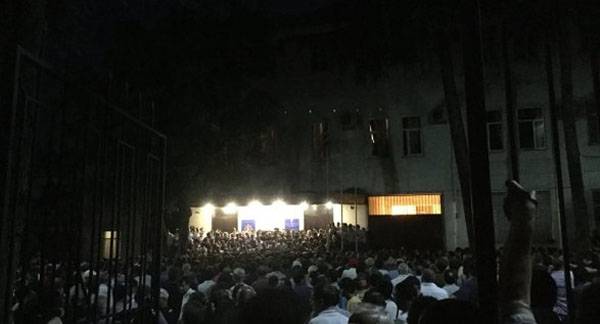 They attacked the building of the Ministry of the Interior, demanding the resignation of its head, Leonid Dzapshby. The protesters broke the gate blocking the way to the courtyard of the Ministry, set fire to the visor of the building itself. According to media reports, at least 16 people suffered during the rally. 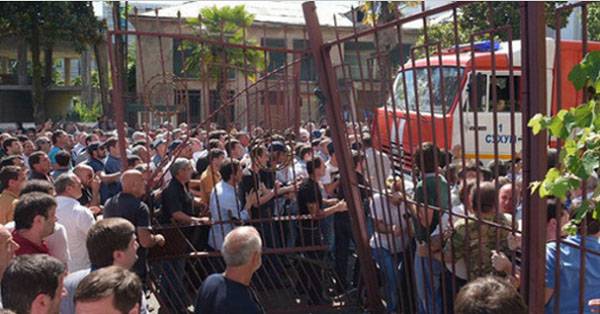 Against the background of throwing incendiary bottles with the building of the Ministry of Internal Affairs of Abkhazia, the demonstrators demanded that the current government in the republic assist in opening polling stations (and participating in a referendum) not only directly on Abkhaz territory, but also in the Russian Federation - where the Abkhaz diasporas are the most numerous . We are talking about Moscow, Krasnodar Territory, Karachay-Cherkessia.

The rally of representatives of those who call themselves the opposition, naturally, did not go unnoticed by the current president. Raul Khadzhimba’s initial reaction was as follows:

The referendum will be! And if our people make the decision on the resignation of Khadzhimba, I will accept it. But if this does not happen, I will fight to the end with all the negative aspects that exist in the state. And no one can scare me!

After that, Khadzhimba decided to moderate somewhat the rhetoric and made concessions in relation to the protesters. Having explained his unwillingness to bring the situation to a bloodshed, the President of Abkhazia dismissed the head of the Ministry of Internal Affairs Leonid Dzapshba.

The main complaints against Dzapshbe from the opposition were connected not only with the high level of “crime” in the politics and economy of the republic, but also with the audio recording that had recently appeared. During this recording, a voice similar to the voice of the Minister of Internal Affairs of Abkhazia announced that he would not allow any of his subordinates to go to a referendum. From the speech that appeared on the Internet:

I'll see who will come to the referendum! My employee will go to a referendum? Yes? Penny to me the price will be! Try to go!

The opposition immediately announced that, by adopting the “rules of the game” regarding a referendum, the current government actually prepared everything for its breakdown - for a minimum turnout and “manipulation” of the results.

However, the dismissal of the head of the Ministry of Internal Affairs of Dzapshba nevertheless died down the ardor of the protesters and open protests subsided.

Against the background of the information presented above, it can be noted that the political situation in Abkhazia can hardly fail to worry Russia. Since Moscow recognized Abkhaz independence, almost 8 years have passed, and the situation is far from political stability and economic good. A republic with a huge economic potential (the same tourist cluster) and a permanent population of just over a quarter of a million people can’t fully feed themselves. Budget revenues - about 11 billion rubles, of which own - about 25%. All the rest is financial assistance from Moscow. And on the lion’s share of the Russian financial aid, Abkhaz officials cannot really report. That is, there is no full-fledged reporting documentation that answers the question of where the billions of funds allocated by Russia go.

The presidents of Abkhazia are changing, the governments are the same, but things are still there. According to the statements of the current Abkhaz opposition, Russia is ready to provide substantial assistance to Abkhazia and beyond. But in the absence of evidence that Russian funds do not go into the pockets of local kings, Moscow can simply turn off all the help. All the more so because not everything is all right with ourselves and the individual local kings ...

For Russia, such an environment looks, to put it mildly, nervous. The only advantage at this stage can be called the fact that both the current Abkhaz authorities and the opposition declare their unequivocal commitment to the policy of partnership with the Russian Federation. But who can guarantee that in one far from perfect moment the protest waves in Abkhazia will not saddle the faces of a completely different spill - the very ones who are capable of knocking out part of the “hot” Abkhaz population with their heads? No guarantees.

And if Russia confines itself to diplomatic statements that the situation in Abkhazia is an internal affair of the Abkhazians themselves, then it is believed that others will take up the “Abkhazian affair” in the near future. If you are not already engaged ... I would not like to talk about it, but who prevents Turkey from taking on the question of financing the already completely non-system Abkhazian opposition (a billion or other rubles — and ...) to shake the Abkhaz situation to internal strife with blood and chaos? Who prevents to make a similar move of Georgia, which, under such and such an initiative, the “friends” will give money ...

I would like to believe that, after all, there is a state that is ready to prevent this and to establish a truly stable development on the territory of Abkhazia with the help of the Abkhazians themselves - with the stimulation of not a real deceit, but a really working economy. And this state is Russia. If Russia withdraws, the process can go a long way, and it’s definitely not in the hands of Russia itself.

Ctrl Enter
Noticed oshЫbku Highlight text and press. Ctrl + Enter
We are
Abkhazia: coup attemptThe West opposes the people's will in the Crimea and is preparing sanctions for Russia
Military Reviewin Yandex News
Military Reviewin Google News
47 comments
Information
Dear reader, to leave comments on the publication, you must sign in.