Ukraine in a geopolitical deadlock. Is there a way out of it? 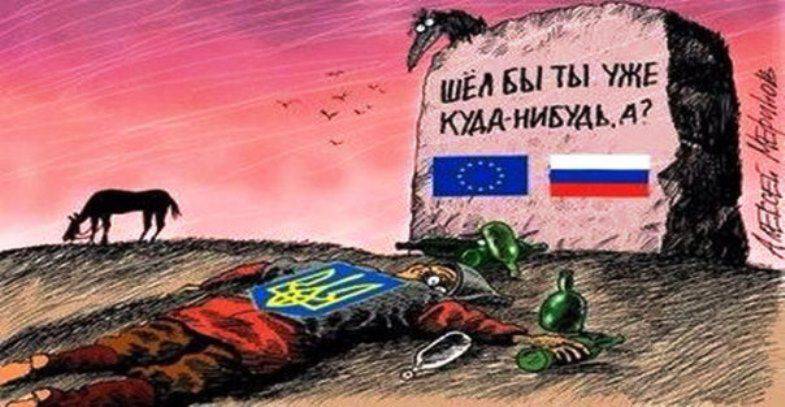 First, the Dutch referendum, and then Brexit finally brought Ukraine into a geopolitical impasse, from which, it would seem, there is no way out.

Therefore, it is not surprising that the results of the Brexit in Kiev decided to interpret in their favor: “Is Britain coming out - is Ukraine coming? To save Europe as a continent, ”Verkhovna Rada deputy Anna Gopko shed a balm for the soul of her compatriots. She probably meant that "a holy place is never empty."

The Ukrainian Foreign Ministry spokesman Martin Schaefer cooled down the hot Ukrainian heads. 27 June 2016 in the course of communication with journalists, he said that in the foreseeable future, the question of Ukraine’s accession to the EU will not be considered.

So, this Schaefer picked up and slashed the uterine truth, and fatally offended the entire Ukrainian nation, which, as we know, don’t feed it with bread, just let it enter.

However, you should not delude yourself that all these troubles took the Ukrainian establishment by surprise. It is known for certain that at the very top, under the conditions of the strictest secrecy, painstaking work was carried out to implement a certain plan "B".

I must say that the plan "B" is both brilliant and simple. It consists in gradually curtailing the failed project of European integration and proclaiming the course of afro-integration.

Many, of course, will tell me that I am simply mocking the unhappy Ukrainian people, composing, so to speak, vile insinuations.

I want to immediately warn you that we are not talking about any Afromaidan. By all indications, this is more like a revolution from above than the will of the masses. You can laugh, but the fact remains: 22 June 2016, Ukraine officially received the status of an observer country in the African Union (AU).

And this, as we understand, is the beginning of a long way. It is clear that the strategic goal of Ukraine is not only and not so much the acquisition of full membership in the African Union, as a real opportunity to head it in the future.

Moreover, the main parameters of the socio-economic development of the countries of the AU and the Ukrainian state practically coincide. Although in terms of the mortality rate, Ukraine (14,46) is confidently leading here, yielding the palm to only one African country - Lesotho (14,89). But agree, the difference here is purely symbolic.

All other members of the AU have remained far behind, since their mortality rate is much lower. But in terms of wages, Ukraine is still lagging behind some African states, which means there is much to strive for.

Surely in the Ukrainian political elite there will be those who will be in opposition to this course, the so-called afroskeptics. For example, a member of the Opposition bloc will speak in the Verkhovna Rada and declare that it is not yet time to apply for full membership in the African Union. Say, let's first catch up with the leading African countries in their standard of living so that we will not be thrown a second time with this very membership, be it amiss.

Understandably, no one would listen to such provocateurs. No one is allowed to destroy the great Ukrainian dream of joining, no matter now where it is, if only not in the Customs Union. Moreover, the process of afrointegration is already running, and it is impossible to stop it.

Evil tongues say that in a hurry, a new political party is being created - “Alternative for Ukraine” (ADU), which will practice a new ideology - Europhobia. The main task of the members of this party will be to curse Europe and everything connected with it, while praising Africa in every way possible, its history and culture.

Well, but we only have to wish the Ukrainian people great success on this difficult, thorny and, of course, promising path.

PS An urgent message was received: from reliable sources it became known that literally today a new book was put into print by the second president of Ukraine, Leonid Kuchma, which is called “Ukraine is not Europe”.