July 7 2016
14
The supply of new electronic systems to the armed forces continues. In the beginning of July, intelligence units of the Eastern Military District received new equipment. According to the press service of the military unit, reconnaissance aircraft received new compact radar 1L227 “Sobolyatnik”. This equipment will allow reconnaissance personnel to conduct their work with greater efficiency, and, thanks to their small size and weight, will facilitate the transportation of the necessary equipment.


It should be noted that the “Sobolyatnik” radar stations recently transferred to the subunits of the BB, are not the first such systems deployed to the troops. Thus, the first deliveries of such equipment in the interests of the Eastern Military District took place at the end of 2014. According to the State Defense Order for the 2014 year, the BMO motorized rifle units were to receive the 10 newest radar of two types of near-range intelligence. A part of this equipment consisted of the Sobolyatnik 1L227 station. In the future, the production of such systems was continued. New serial samples also transferred to the troops. The last delivery at the moment took place a few days ago.

The compact radar 1L227 Sobolyatnik was developed by the Tula NPO Strela, which is part of the Almaz-Antey air defense concern. The aim of the project was to develop a radar station that is small in size and capable of monitoring the situation within a radius of several dozen kilometers. The main objective of such a radar is to monitor the actions of its troops and the enemy with the detection of firing from various artillery systems, both cannon and rocket. Also required to ensure tracking of ground objects. 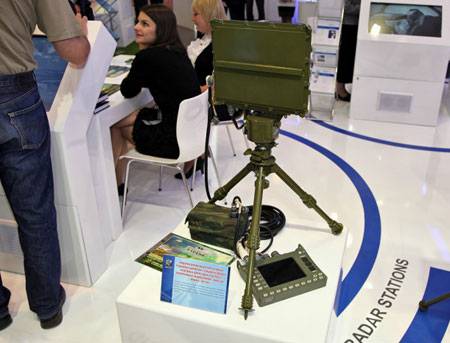 The composition of the equipment of the Sobolyatnik station was selected and designed in such a way that it could monitor the flying artillery shells, as well as calculate their starting point and place of fall. There is also the possibility of fixing the crash site on the explosion and its consequences. If necessary, the station calculation can monitor not only moving targets, but also stationary objects. Thus, the new radar is a multifunctional detection tool, suitable for solving a fairly wide range of reconnaissance tasks.

When creating a new project 1Л227, the specialists of NPO Strela took into account the operating experience of previous systems of a similar purpose. At present, the Army’s anti-aircraft service station PSNR-8M, which has been established for a long time, is in service with the army. During the development and operation of this system, the military expressed certain wishes, which were taken into account when developing a new project. The result was the emergence of a new radar with enhanced technical characteristics, which differs from its predecessor in greater ease of operation.

In the course of the new project, modern developments in the field of electronic systems were used, which allowed the Sobolyatnik system to provide certain advantages over existing analogues. Moreover, the project developers call the new radar a real breakthrough in the field of ground reconnaissance systems. Announced information and technical characteristics of 1Л227 radar can be a confirmation of such statements.

Station 1Л227 "Sobolyatnik" is intended for the use of military intelligence, which affected its architecture. It is made in the form of a complex of various means that can be transferred by the calculation of several people, as well as quickly get together and be used to perform the tasks. All means of the "Soboljatnik" in total weigh about 36 kg, which allows you to transport the system and perform all operations for its operation by the calculation of two people. 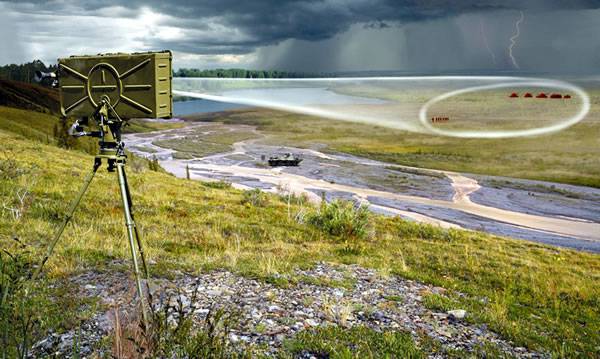 Demonstration of the system. Drawing Nationaldefense.ru

The 1Л227 system consists of several main blocks. The main element is the antenna device, made in the form of a rectangular block with a set of necessary equipment. In the working position, the antenna is fixed on the tripod-machine of the folding structure. In addition, the antenna is connected to a portable power source and an operator’s console. It takes several minutes to deploy the station from the traveling to the working position. After completing the assembly, the Soboljatnik is ready for work

The most important innovation of the 1L227 “Sobolyatnik” project is the use of a phased antenna array using a linear frequency modulation signal. Due to this, the station is able to detect both moving and stationary objects of various sizes with different trajectory parameters. The station is able to monitor the situation at distances up to 30 km. For comparison, in previous similar systems, the observation range did not exceed 10-15 km. Phased antenna array allowed to abandon the mechanical scanning of the terrain and remove the electric motor from the tripod to rotate the antenna. As a result, the weight of the structure has decreased, and the reliability of the complex has increased.

Updating the radar also increased the resolution. The new system is able to determine the coordinates of the detected objects with an accuracy of 10 m. Among other things, it allows you to recognize the equipment in the column and "see" it separately, and not as a single long object in a certain area. Also, the station automatics is able to independently analyze the parameters of the detected target and determine its class, distinguishing between people and equipment. Now it is possible to track moving targets against the background of radio signal reflections from the ground. The station is capable of simultaneously tracking up to 20 various targets.

A characteristic disadvantage of previous radar intelligence systems of domestic development was considered excessive power of the emitted signal. Thus, the PSNR-8М station “issued” a signal with a power up to 1 kW, which negatively affected the secrecy of its work and allowed the enemy to detect reconnaissance aircraft. Radar "Sobolyatnik" differs significantly lower levels of radiation. According to the developers, the pulse radiation of this station is less than that of a regular mobile phone. 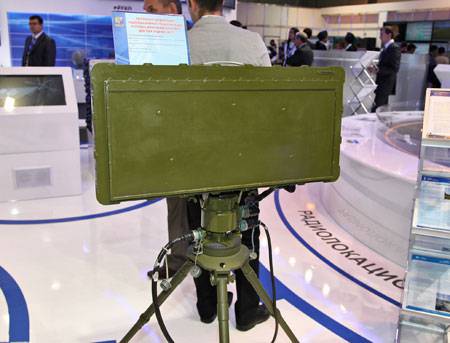 The radar is controlled by a compact remote with a large color screen and a set of buttons. The console connects to the rest of the complex using cables of appropriate length, after which the operator is able to monitor the radar and monitor the environment. The remote has a number of new features that distinguish it from previous analogues. So, the possibilities for working with the obtained data have expanded. Target marks and trails can be saved on the screen for any desired time determined by the operator. It also simplified the work with information that increases the efficiency of the station.

Due to new technologies and the necessary technical solutions, the time of continuous work without breakdowns was brought to 2 thousand hours. For comparison, the already mentioned radar of the PSNR-8 family had an MTBF time of four times less. Increasing such parameters makes it possible to a certain extent to simplify and reduce the cost of equipment operation due to other requirements for maintenance.

The reconnaissance team has the ability to deliver the Sobolyatnik radar to the specified point, deploy it there and start tracking the required area. If necessary, several stations can be combined into a common network with simultaneous joint operation and delivery of data to consumers. In addition, the 1L227 system tools can be mounted on various equipment, which increases the mobility of intelligence officers and simplifies some of their combat work components. 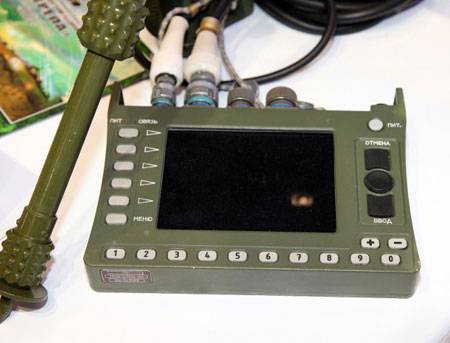 The capabilities and characteristics of the station 1Л227 allow you to solve a fairly wide range of tasks. The calculation has the ability to follow the stationary and moving objects of the enemy, determining their main parameters. There is also the possibility of tracking artillery ammunition in the trajectory with the definition of places of shot and fall. Tracking and calculating the trajectories of projectiles can be used both in determining the positions of the enemy for retaliation, and in the course of controlling the firing of our own artillery. In the latter case, the scouts can become artillery spotters.

A few years ago, the radar 1L227 “Sobolyatnik” passed all the necessary tests, after which it was recommended for use. The first samples of such equipment were transferred to the troops in 2014 year. In the middle of 2015, information appeared, according to which, by this time, the troops had been transferred to the 24 set of equipment, and by the end of the year it was planned to deliver another three dozen stations. A few more "Sobolyatnikov" gave the scouts of the Eastern Military District a few days ago.

It should be noted that the Sobolyatnik radar is not the only system of this class developed in recent years and supplied to the troops. Through the defense industry over the past few years, several light reconnaissance complexes have been created, some of which have reached mass production and are now entering the army. With the help of such equipment, the material part of the troops is updated with a corresponding increase in the capabilities of the intelligence units.