Widely known as the most closed

July 9 2016
11
Israel’s special forces have gained a high reputation in the world, which is based on a long and successful experience of using special forces in constant armed struggle, which the Jewish state throughout stories its existence leads with its Arab neighbors and terrorists. Maximum information about the most secret divisions is collected in the forthcoming book of the Center for the Analysis of Strategies and Technologies “Between Peace and War: The Strength of Special Operations”.

The formation of the special forces in Israel began with the creation of the group of paratroopers "Tsankhanim" (a platoon, then a company staff, later deployed in the 890 paratrooper battalion) as part of the Israel Defense Forces (IDF) Infantry Brigade "Golani". In the 1 – 1951 years in the IDF there also existed a so-called 1952 subdivision (of company staff), focused on fighting Arab rebel and sabotage groups. In 30, under the leadership of Ariel Sharon, an 1953 subunit of up to 101 people, which is considered to be the first full-fledged Israeli special forces unit, was created specifically for holding armed actions outside of Israeli territory. 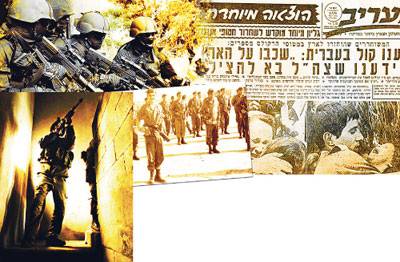 Soon it was merged with the 890 Airborne Battalion, headed by Sharon. In 1956, together with the newly formed 88 territorial territorial parachute and 771 regional reserve battalions, the 890 served as the basis for the deployment of the 35 infantry brigade (actually parachuting, bearing the appropriate name Parachute). It was she who for a long time remained the basis of the special purpose units of the AOI.

From the end of the 50-x in the combined arms brigades of the Israeli army began the formation of reconnaissance ("Palsar"), which, although intended to solve the traditional tasks of military intelligence, in Israeli conditions also actually carried out sabotage and "raider" actions. The further development of these companies in the elite and most active IDF brigades (Parachute, Golani, Givati, Nahal) to the beginning of the 2000-s led to their evolution into special-purpose battalions (Gadsar). Several separate special purpose battalions were created. Some of them were combined into the 89 commando brigade "Oz", the creation of which was a stage in the development of the Israeli special forces.

In 1957, the Sayeret Matkal (General Staff Intelligence, also known as the 262 or 269th unit) unit of the special-purpose central command subordinate to the British SAS was created, focused on conducting reconnaissance and sabotage operations outside of Israel. Their special forces appeared in the Navy (13th flotilla) and the Air Force ("Shaldag" - "Kingfisher") of Israel.

After the major terrorist attacks of the beginning of 70-x, counterterrorist struggle became one of the main tasks of the special forces units in Israel.

Israeli special forces are divided into the so-called outer circle (“intervention forces”) - they include “Sayeret Matkal”, 13 fleet, YAMAM - elite units oriented to reconnaissance, sabotage and antiterrorist actions, including abroad, and "internal", which includes the "military" units of special purpose of the IDF, intended for reconnaissance and actions in the border and occupied territories.

Forces of the "outer circle"

This unit is under the direct authority of the IDF General Staff and is involved in the implementation of the most difficult tasks both abroad and inside Israel. Subordinate to the Chief of the Military Intelligence Directorate of the General Staff (AMAN).

The data on Sayeret Matkal are classified, but it is believed that the number of units does not exceed 200 people. All military personnel have parachute training and several military specialties. Presumably, the unit consists of a command section, three combat units, a special detachment for operations at sea (including as a swimmer) and a supply group.

It is alleged that the training of personnel in Sayeret Matkal is the most intensive among all parts of the Israeli special forces. The selection is initially carried out among volunteer recruits and training by special methods takes about two years. The first four months on the basis of the Parachute Brigade is a standard course of a young fighter, then three-week classes in a parachute school, then training directly at Sayeret Matkal for 18 – 19 months, which ends with a march of 120 kilometers, which is a kind initiation to get the red beret.

Upon completion of the course and testing, the fighter signs a contract for at least another year (in addition to the year of his regular service). Thus, getting into "Sayeret Matkal", a soldier serves four years instead of three years. However, almost everyone further extends the contract, so that the part is completely professional.

The 13 of the Israeli Navy flotilla (Xytum 13) is the oldest Israeli special forces formation. Along with submarine reconnaissance and sabotage operations, the main forms of application of the 13 fleet are the landing from the sea of ​​reconnaissance and sabotage groups, as well as the seizure of ships. Given the constant involvement of the flotilla (in recent decades) for operations in the Gaza Strip, it is believed that at present land operations prevail in the list of the main tasks of the activities of the unit.

The 13 fleet is divided into three specialized groups (“Plow”) of the company’s equivalent — the most numerous “raid” (“Plow of Khapotsim”) for ground and antiterrorist actions, surface actions (on boats), and combat swimmers. There is also a training squad. Flotilla is deployed on the naval base "Atlit" near Haifa.

The recruitment and training of 13 fleet personnel is similar to the Sayeret Matkal - volunteers are also selected among draftees. Their training includes a six-month infantry course based on the Nahal Brigade, a three-week parachute school course, a three-month preparatory special-purpose course (with emphasis on sea training and swimming), and a monthly diving training course, followed by a basic 12 – 13 month-month training course directly in the 13 fleet. Here they are already distributed in specialties and in three specialized groups of the flotilla. After that, a contract is concluded with a fighter of one and a half years (in addition to the main three-year term of fixed-term service). Thus, the initial service life of a fighter in a unit is 4,5 of the year.

A special unit (5101-e) of the Israeli Air Force created from reservists "Sayeret Matkal." Initially, his main task was advanced aviation guidance and target designation, then the main task was the rescue of the crews of the Air Force on the enemy’s territory, as well as the traditional anti-terrorist fight for Israeli special forces. As a result, "Shaldag" is a kind of "departmental" special forces of the Air Force, not too different from "Sayeret Matkal." It is deployed at the Palmachim airbase. The training course for fighters "Shaldag" takes 22 month, because it includes the study of navigation, advanced aeronautical and target designation, intelligence in the interests of the Air Force.

YAMAM is an acronym for “Special Central Unit” or “Special Police Unit”. This is the “main” anti-terrorist unit in the country (like the “Alpha” in Russia or the GSG-9 in the Federal Republic of Germany). The current strength is about 200 people.

Formally, the YAMAM specialization is the release of hostages, but in fact it is used to perform a wide range of tasks.

According to Israeli sources, YAMAM closely interacts with the Israeli security service Shabak and currently actually plays the role of its direct force instrument.

In service in YAMAM go under the contract. A candidate can be any member of the army, police and border service under the age of 25, who served at least three years in combat units and completed a course of section commanders. The contract is signed for three years with the right to extend for several terms. All applicants undergo an intensive training program for a period of 13 months.

Ariel Sharon went to the AOI from the corporal to the general. He headed the division "101", which became the prototype of "Sayeret Matkal." Many spetsnaz operations led personally. Among the soldiers enjoyed unquestioned authority and great popularity.

Ehud Barak Ehud Barak commanded the special forces "Sayeret Matkal", was one of the main developers of the commando raid on Entebbe. In 37 years, he was promoted to brigadier general, in 1971, he was appointed to lead the General Staff of the AOI.

Moshe Ya'alon Moshe Ya'alon made Sayeret Matkal a brilliant career; the time when he commanded the special forces was called one of the most prosperous. In 1995-m appointed head of military intelligence. Three years later - the commander of the Central Military District. In 2002, the head of the IDF Gestab.