One and without weapons

July 9 2016
79
Since 60, Liberty Island has been one of the most important geopolitical allies of the USSR, having received a significant amount of modern military equipment. As a result, the Cuban army became the strongest in Latin America, both in quantity and quality of weapons, and in the level of combat training, which was demonstrated in the wars in Ethiopia and Angola.


The most important achievement of the Armed Forces of Cuba is their victory in Angola over the formally African, but in fact Anglo-Saxon army of the Republic of South Africa at the end of the 80.

The collapse of the USSR was a disaster for Cuba. Since that time, the country's Armed Forces have not received any new military equipment, which has degraded very much. In order to correct the situation in Cuba, the production of "hybrids" was established. For example, SAU, PU ZRK and coastal anti-ship missiles on the T-55 chassis. In turn, the T-55 towers are installed on the BTR-60P, and the result is BMTV. Similar combinations are made with the BMP-1. The apotheosis of this hybridization has become frigates from fishing trawlers (for more details, “Thunder of Freedom”). Such a “permutation of the components” does not provide a real increase in the combat power of the Armed Forces, since the amount remains the same. There is no real upgrade of weapons, which leads the Cuban army to complete degradation in the foreseeable future.

Due to the antiquity of the technology and the above-mentioned "hybridization", it is extremely difficult to establish the exact number of combat-ready samples of each type. 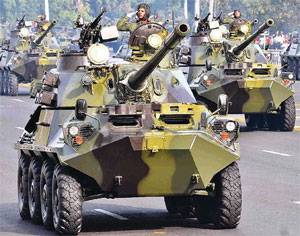 The air force is affected by the obsolescence of weapons and military equipment is much stronger than ground forces, and therefore very close to complete retirement. Organizationally, they are divided into three air zones, each of which includes one air rifle: "West" (2-I brigade), "Center" (1-I), "East" (3-I).

In the coming years, only Mi-17 helicopters will retain their combat capability as part of the Cuban Air Force, the rest of the equipment will be decommissioned.

The Navy was unable to contain most of the ships and boats of Soviet construction. The submarine fleet currently consists of four Dolphin-type SMPLs (a variant of the North Korean SMPLs of the South type). The largest surface ships are two frigates of the Rio Damuji type. They are former Spanish fishing trawlers, which are equipped with anti-ship missiles P-15 from decommissioned missile boats and the land ZSU-57-2 tower. The largest "normal" warship is the 1241P Corvette.

The Cuban Navy has a Marine Corps of two battalions. Significant potential has coastal defense. It consists of the SCRK P-15 (including the PU of these CRP, taken from the missile boats and mounted on the T-55 chassis), as well as the A-19, M-46, ML-20 guns (among those specified above).

The only potential adversary of Cuba is the United States; the countries of Latin America have neither the capacity nor the desire for a military invasion of the island. Of course, the potentials of the armed forces of the United States and Cuba are currently completely incomparable. Nevertheless, the island position, the continuing high level of combat and moral and psychological training of personnel make the invasion of Cuba quite a complicated operation, even for the US Armed Forces. Washington will only intervene in the event of serious internal destabilization on the island. Therefore, the current degradation of the Cuban armed forces has not yet led to disastrous consequences for the country. The restoration of their potential is unlikely. Russia, of course, could supply Cuba with modern equipment, but in the current situation it is not ready to do it for free, and Havana does not have money and will not have it. Especially since a certain, albeit rather limited, rapprochement between Cuba and the United States began. This only reduces the desire of Havana to spend the missing money on rearmament.