In Zhukovsky, said goodbye to the dead IL-76 pilots 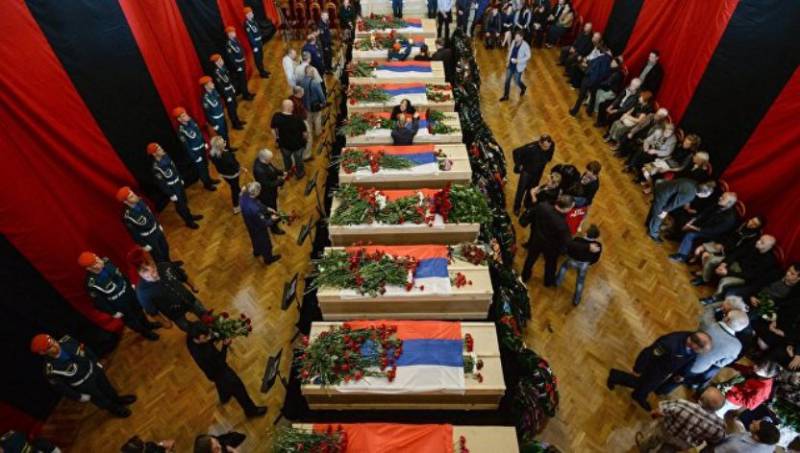 “People with cloves began to gather around the House of Culture half an hour before the commemoration began, which was supposed to go from 10.00 to 11.00 Moscow time. Because of the large number of mourners, the dirge was extended to 12.00. The requiem was attended by one of the founders of the Russian Emergencies Ministry, deputy chairman of the Federation Council, Yuri Vorobyov, ”says the report.

10 zinc coffins with photographs of the dead were installed in the Hall of the House of Culture. At the end of the funeral, they were taken out of the building and loaded into a mourning procession. The Yak-40 flew over the city several times, and the rescuers' cars headed off with their sirens turned on.

“On Wednesday, airborne radio operator Igor Murakhin and airborne operator Sergei Makarov will be buried at the Bykovsky Memorial Cemetery in Zhukovsky. On Thursday, in Chkalovsky, Moscow Region, they will say goodbye to Il-76 commander Leonid Filin and navigator Georgy Petrov, as well as onboard engineer Viktor Kuznetsov. In Zelenograd - with aviation technician Vadim Zhdanov, in Vnukovo - with the co-pilot of IL-76 Alexei Lebedev, in Lukhovitsy - with the on-board operator Sergei Susov. Also on Thursday in Volgograd they will bury onboard operator Marat Khadaev. Andrei Mashninov’s aircraft technician will be buried in Ramenskoye, Moscow Region, ”the agency’s correspondent said.

Recall IL-76 was engaged in extinguishing a wildfire in the Irkutsk region. On July 1 in 6: 30 Moscow time, the crew did not get in touch. The aircraft was found south of n. Fish Uyan, all crew members died.

Ctrl Enter
Noticed oshЫbku Highlight text and press. Ctrl + Enter
We are
The situation in the south-east of Ukraine. Chronicle of events. 3 MayRogozin visited Nizhny Tagil, shot from a tank and a gun
Military Reviewin Yandex News
Military Reviewin Google News
27 comments
Information
Dear reader, to leave comments on the publication, you must sign in.