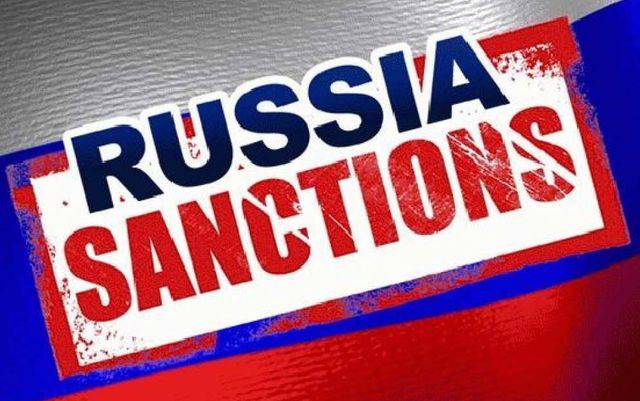 It is possible that the consequences of the Russian sanctions were a feather that broke the back of the "financial camels" of the European Union ...

Not half a year has passed since as we wrotethat Deutsche Bank has big problems, and this is finally recognized by the IMF.

A few days ago, in its next report, the International Monetary Fund stated that “Deutsche Bank is one of the global systemically important banks that could potentially cause significant damage to the financial system at the global level”.

Also among the most troubled banks are the British HSBC and the Swiss Credit Suisse (both are in the list of the largest banks in the world).

In addition, the American offices of the German Deutsche Bank and the Spanish Banco Santander SA failed the Fed's stress test (Deutsche Bank fails it for the second year in a row). Also, significant problems among US banks were recorded at Morgan Stanley.

But among all the troubled banks (and there are problems not only among those listed above, but also among many other large banks) Deutsche Bank is the most difficult. I would even say that his position is hopeless.

However, all these are insignificant indicators compared with the rapid growth in the number of toxic assets on the balance sheet of Deutsche Bank.

The management of the bank, represented by CEO John Krayan and Jürgen Fitschen, announced a “new strategy that should change the course of the bank.” However, the strategy mainly describes changes in the number and location of bank branches, as well as in the number of employees (which is informative, but not important), but in no way explains what they are going to do with these most toxic assets.

In particular, Deutsche Bank has built a pyramid of derivatives larger than 70 TRILLION euros. If, or rather WHEN it collapses, then the fall of “Lehmann Brothers” will seem a slight cold compared with bubonic plague.

If the fall of “Lehmann Brothers” in 2008, resulted in the loss of one and a half million jobs in the US alone, the eviction of millions of people from their homes over 3, a fall in world trade, and the effects of the crisis have not completely stopped until now, despite several episodes quantitative easing "(QE) by the Fed, the consequences of the new crisis, which may be triggered by the fall of Deutsche Bank, will be several times worse.

Even the IMF analysts recognize that it will cause a chain reaction that will bring down not only the euro area, but also will result in the US stock markets. The ECB itself does not pull the consequences of such failure and unwillingness to bear the brunt of the consequences (especially after a British referendum on withdrawal from the EU) will push member states to the parade of sovereignties, with the result that the European Union is likely to cease to exist.

And the day when Deutsche Bank goes bankrupt is rapidly approaching. At the last trading session on Friday, the company's shares sank 15%, setting a new historical minimum. Two or three more such sessions, and vso.

So, Vesti.Finance is surprised why “the Deutsche Bank story for some reason didn’t promote the media too much for a long time”, although we repeatedly wrote about the problems in this bank a year ago (we were called out of the habit of alarmists) .

For clarity, compare the charts of the fall in the value of the shares of Deutsche Bank and Lehmann Brothers. 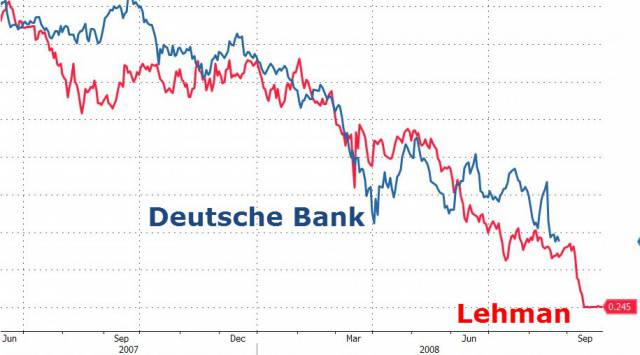 As you can see, they display almost identical trend.

In fact, BNP Paribas, JP Morgan, Citigroup and several other banks have similar problems. But, judging by the way public attention is focused on “DB”, it was decided to implement the strategy “Die you today and I tomorrow.”