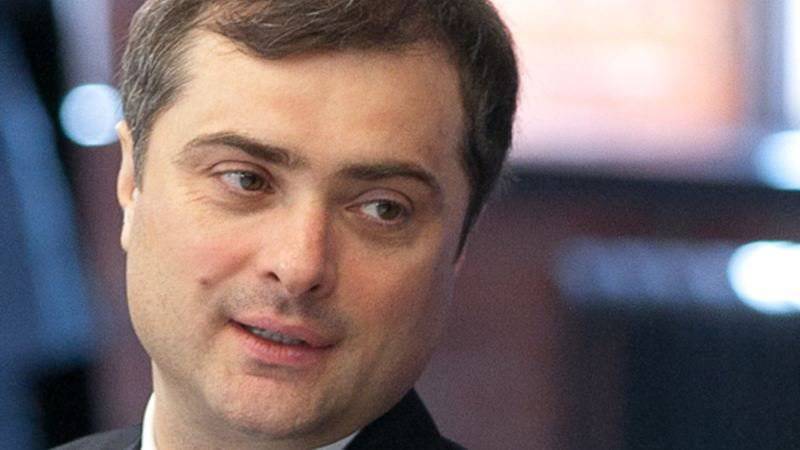 The popular unrest of the last weeks continues to respond loudly in the highest circles of the government. It would seem that the national Russian tradition should work a long time ago - to drop everything and prepare for the New Year, but it was not there. Literally every day, power throws up to its people (us, that is) something well predictable, then generally non-susceptible metamorphoses in “higher spheres”. One of these perturbations was the appointment of Vladislav Surkov to the post of Deputy Prime Minister of the Russian Federation. Now, the former first deputy head of the presidential Administration will deal with modernization issues. Vyacheslav Volodin, one of the active party functionaries of United Russia and already the former head of the government apparatus with the rank of deputy prime minister, took his place.

Among analysts, disputes do not abate: what is the reason for this kind of reshuffle before the onset of the New Year holidays. Someone saw this as a regular New Year's gift "under the tree" from Vladimir Putin, who recently promised to "put" fair presidential elections under an evergreen holiday tree. It is possible that, along with the honest presidential elections, Putin decided to give the people also the resignation from his post of Vladislav Surkov, whose activities on the part of the opposition forces have recently been seriously criticized, if not more, by public rejection. Sometimes it seemed that the protesters of the “Decembrists”, the personality of Mr. Surkov, were even more concerned than the “magic” of the main “CEC officer” Churov at the recent parliamentary elections in our country.

Foreign publications so called Vladislav Surkov at all as the ideological inspirer of mass censorship and the creation of a “personality cult” in new Russia. British journalists exhibited Surkov as a “strangler” of democratic norms and an instigator of higher authorities for the revival of the one-party system.
Whatever it was, but during the work of Mr. Surkov in the presidential Administration (and this is from 1999), such a political system really managed to form in Russia that cannot be called a multi-polar and multi-party language. But the question is - is it really Vladislav Surkov who was able to build the very vertical of power, which, for some time now, is called “Putin's”? In order to answer this question, it is necessary to touch on the biography of Mr. Surkov.

And in the biography of this full of moments that resemble either episodes from the sentimental Indian film, or excerpts from the biographies of people who lived in those times when the statistics were not public authorities, and in the best case, chroniclers. So even the place and date of birth of Vladislav Surkov remain unknown for certain. According to the official version, it is believed that Vladislav Surkov was born in one of the villages of the Lipetsk region in 1964, however, Surkov himself in an interview with the authoritative Der Spiegel once stated that he belongs to (quote) “to the world famous people”. This people is the Chechen people, as the father of Vladislav Surkov is Andarbek Danilbekovich Dudayev, who worked in the school of the village of Duba-Yurt in the Shali district of Chechen-Ingush Autonomy with his mother Vladislav. By the way, the name Vladislav is not quite real. At birth, according to the journalists of Komsomolskaya Pravda (year of birth - 1962), the current deputy chairman of the Russian Government was named Aslambek. His father gave him this name in honor of the hero of the 1917 revolution, Aslambek Sheripov. It turns out that one of the ideologists of the creation of the United Russia party and Vladimir Putin’s deputy (from December 27 on 2011) is not Surkov Vladislav Yuryevich, but Aslambek Andarbekovich Dudayev ...

Vladislav Yurievich Surkov himself appears when his father left for another family, and young Aslambek-Vladislav and his mother moved to the Lipetsk region.

Further, the biography of Surkov-Dudayev also has a number of very surprising sharp turns. After graduation, Vladislav (we will adhere to the official name) entered the Moscow Institute of Steel and Alloys, however, after studying for a couple of years, he was expelled from there due to low academic performance. After serving in the Soviet Army, Vladislav Surkov decided to test himself as a student of the Institute of Culture, but in the third year he decided to quit his studies. Although, apparently, the potential of the director in Mr. Surkov is evident to this day.

Officially, Mr. Surkov has a master's degree from the Russian-American University, although here journalists tend to believe that the diploma was not obtained due to Vladislav Yuryevich’s diligence and diligence, but due to his acquaintance with many high-ranking officials at the end of 90. But how could a man who, in fact, did not have an honest and systematic career behind him, find himself in the highest echelons of power?

The answer is simple: Mr. Surkov for some time was involved in the notorious structure of Menatep, where he initially worked as a security guard of Mikhail Khodorkovsky. Due to the irrepressible desire to either curry up, or really move up the career ladder, or both, Vladislav Surkov not only protects his boss, but also takes on the most unimaginable advertising projects of the company, which increases his personal rating in Khodorkovsky's eyes. It was precisely advertising “deeds” of Mr. Surkov that made him see a serious PR man, who at that time was simply necessary for Russia, and with the active support of financial elites.

It turns out that Mr. Surkov, in which exactly half of Caucasian blood flows, is ambitious enough, self-serving and accepts any wishes from above on no other than the most real orders. Therefore, the current translation, which some consider to be a lowering, others to be an increase, personally Surkov himself perceives simply as just another order that must be executed by all means. Therefore, we can already say that soon Vladislav Surkov will start inventing such formations on the basis of modernization, which will not limit itself to modernization, but will, one way or another, emphasize the current structure of current political power.

In connection with the facts of his biography, it is possible to draw a portrait of Vladislav Yuryevich Surkov, as a man who tried and tries his best to please his immediate superiors. Such a desire in Russia was encouraged at all times, and therefore Surkov’s career was quite impressive, even with its very vague past. It is possible that it is precisely the desire to demonstrate their irrepressible loyalty to the leadership, which is precisely what has been expressed in what we call today “sovereign democracy” and the Russian vertical of power. Over the past 12 years, Surkov was able, using a rather clumsy method, to show the so-called systemic opposition to its true position as vertical holders. After all, if she stops holding, then the vertical itself collapses, crushing the oppositionists scurrying around. However, a different kind of opposition has appeared, which, as it turned out, does not want any falls at all, but simply wants the authorities to listen and hear it. It was the birth of such an opposition that seemed to push the leaders of the state to move Surkov a little bit.

But, apparently, both Putin and Medvedev appreciate the executiveness and acumen of Mr. Surkov, and therefore decided not to refuse his services for the sake of Bolotnaya, but to transfer him to other rails. But, being guided by the principles of the existence of Vladislav Surkov, one can be sure that he will use these rails also not as a backup option for implementing his plans to please the government that is at the helm of the country.

Ctrl Enter
Noticed oshЫbku Highlight text and press. Ctrl + Enter
We are
About Stalin and KhrushchevOn the other side of the “red” and “white”. Izborsk Club Report
Military Reviewin Yandex News
Military Reviewin Google News
34 comments
Information
Dear reader, to leave comments on the publication, you must to register.