July 6 2016
3
Austrian armory Steyr Mannlicher introduced in 2016 a new version of its large-caliber sniper rifle Steyr HS .50, which was equipped with a modified muzzle brake and a shortened barrel. This is a great occasion to remind you of this 12,7 mm large-caliber rifle, which is designed to destroy light armored vehicles and unarmored targets, radar, aviation equipment in parking lots, artillery and rocket launchers, enemy manpower and anti-sniper fighting and is effective at ranges up to 1,5 kilometers.

After a relatively unsuccessful attempt to create an innovative anti-material rifle, Steyr IWS 2000 / AMR 5075, which fired new, but non-standard, sneaky 15,2x169 mm cartridges, the famous Austrian weapon company from Steyr decided to take revenge. A simpler, but very accurate rifle, the Steyr HS .50, designed by Heinrich Fortmayer and its numerous modifications, are quite firmly included in the company's production program and have been successfully implemented for over 10 years, and are also actively exported.

The Steyr HS .50 large-caliber sniper rifle was not created in Austria, in fact, this type of firearm is of German origin. The German weapons designer Heinrich Fortmeier in 1999 from the small town of Delbrück, located in North Rhine-Westphalia, began to create large-caliber single-shot rifles of his own design and decided to establish the eponymous company under the name Heinrich Fortmeier. Quickly enough, Heinrich Fortmeier managed to interest in his own development of specialists of the Austrian company Steyr-Mannlicher. By order of this company, Fortmayer in 2002 created a rifle under the name Fortmeier M2002, which later became known as Steyr HS .50, specifically for the American exhibition SHOT Show. The first rifles, which were then presented at an exhibition in Las Vegas, he made on his own, but later the Austrians themselves arranged their release at an enterprise in the city of Steyr.

It is curious that after the completion of the project, the Steyr-Mannlicher company allowed Heinrich Fortmayer to manufacture the HS.50 rifle under his own name. At the same time, rifles, which were created in Germany and Austria, were insignificant, but differed from each other: if Steyr HS .50 rifle uses barrels of its own production, then Lothar Walther barrels are used in German rifle rifles. In this case, the rifles there are a number of other, but less significant differences.

The rifle debuted in the United States, it was demonstrated at the SHOT Show 2004 gun show. Later, based on the concept of Formermeier, a magazine version of a large-bore rifle was developed, which was designated HS .50 M1, and a version for another cartridge, .460 Steyr (11,65x90,5 mm), was also created. This cartridge was specially created as an alternative to the popular 50 BMG combat cartridge (12,7x99 mm). Approximately 3 a year ago, the Steyr HS .50 sniper rifle M1 began to enter the service of the Austrian army. In particular, these rifles are now armed with snipers of the 6 th brigade of mountain rangers, which is deployed in Tyrol. Each battalion in the mountain rangers brigade has a reconnaissance platoon, which includes the presence of a "heavy" sniper squad, which is armed with large-caliber rifles. Prior to this, such large-caliber rifles in Austria were armed only with special units (these were Barrett M82 and M95 rifles).

Large-caliber sniper rifle Steyr HS .50 today meets all the requirements of the conduct of hostilities. This is achieved due to the highest level of accuracy, workmanship and maximum simplicity of the rifle design. These qualities allowed the rifle to become world famous; today, these weapons are in service with the army and police special forces in many countries of the world. The original rifle was single-shot, but soon a new multiply charged version of the Steyr HS .50 M1 was created, the main difference of which was the presence of a detachable box magazine designed for 5 cartridges. This store is located horizontally and is located on the left side of the sniper rifle.

As stated on the official website of Steyr (by the way, it also has a version in Russian), the STEYR HS .50 large-bore rifle opens up a new era of long-range shooting. The cold forged rifle mounted on the rifle provides the shooter with excellent shooting accuracy up to 1,5 kilometers. Particularly noted is the fact that the rifle is fully ready for use immediately after assembly. In this case, dismantling the barrel of a sniper rifle with optics installed on it takes the shooter quite a bit of time - just a few seconds.

The cold forked sniper rifle is screwed into the receiver and has longitudinal ribs that are designed to cool it better. The dual-chamber muzzle brake mounted on the end of the barrel is distinguished by high efficiency and significantly dampens the recoil energy at the moment of firing. Also, to mitigate recoil on the butt plate butt has a special rubber base. The barrel is locked with a slide gate (on an 2 combat stop). The angle of rotation of the shutter rifle when unlocked is 90 degrees. The powerful shutter handle makes it easy for the shooter to handle this process with tight extraction or contamination of the weapon. The triggering of the rifle was carried out with a warning and is not regulated, the factory setting of the force on the trigger is 18 N.

The two-position safety device mounted on the weapon blocks the trigger. The rifle's box is made of aluminum, it has an adjustment of the cheek to the individual characteristics of the owner. The front part of the rifle box at the bottom was made flat, so that the weapon was conveniently supported on a sandbag when firing from a support (benchrest). Bipod rifle made folding, they are removable and can be adjusted in height. At the same time, the rifle simply does not have any mechanical sighting devices; instead, a Picatinny MIL-STD-1913 mounting strip with a width of 1 inch, which is suitable for mounting optics with 30 mm or 34 tube diameters, is provided on top of the receiver. 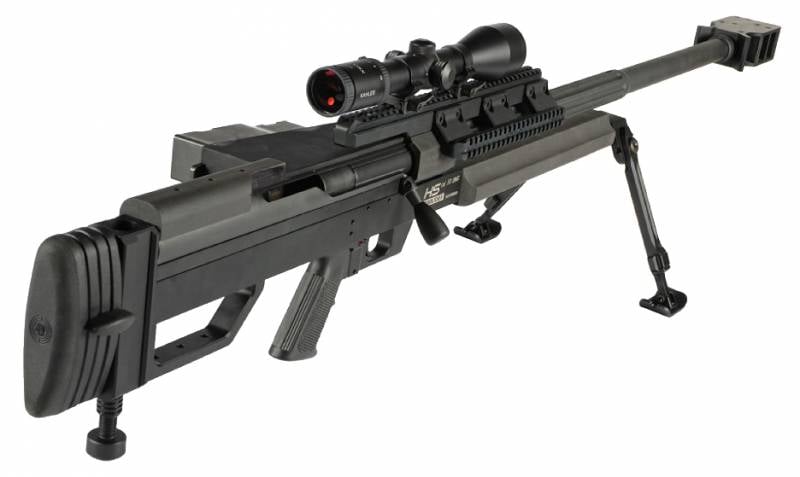 The large-caliber sniper rifle was designed primarily for use by the military, for which reason its assembly and disassembly were simplified as much as possible, and the rifle itself consists of a relatively small number of parts and is distinguished by increased strength. At the same time, the Steyr HS .50 rifle is distinguished by high accuracy of fire (dispersion is no more than 0,5 MOA), which makes it one of the most accurate and modern large-caliber rifles in the world. The rifle comes in a sturdy wooden case and is completely ready for use, it already has optics installed (the type of sight is determined by the end user himself).

The sequence of incomplete disassembly of the Steyr HS .50 sniper rifle:

1. Remove the telescopic sight from the rifle by loosening the clamping screws with the 3 until it is possible to detach the scope bracket by tilting it to the side.
2. Unscrew the 2 screws that secure the barrel until the barrel is free.
3. Separate the rifle barrel.
4. Pull the bolt forward out of the receiver.

- Options Steyr HS .50 and Steyr HS .460 - single-shot sniper rifles with aluminum butt. At the same time, the version chambered for .460 Steyr was created mainly for athletes from countries in the world where it is forbidden to have small arms of military caliber at the legislative level;

- Steyr HS .50M1 - shop version of the popular large-caliber rifle. Differs in the presence of a detachable box magazine on 5 cartridges, a trigger with a schneller, bipod improved design, additional support under the butt and an extended Picatinny rail. 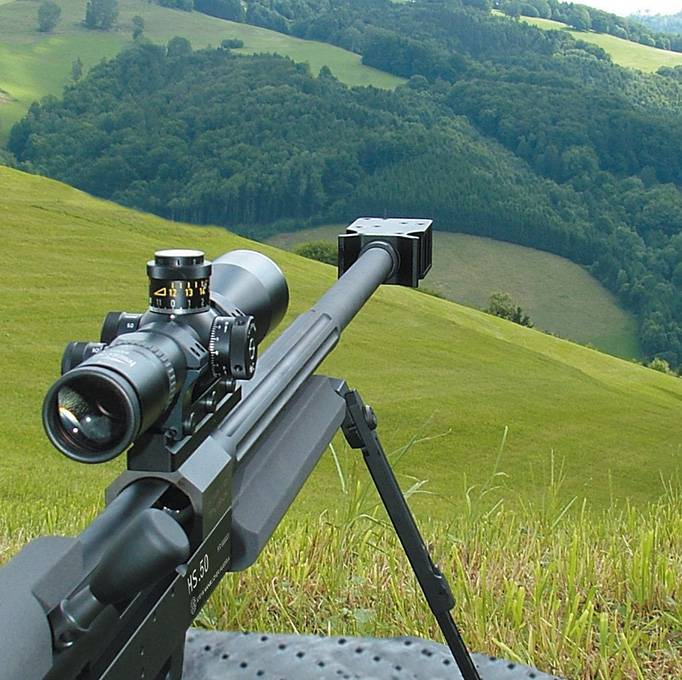 Large-caliber sniper rifle Steyr HS .50 was exported to 11 countries of the world. In addition to the use of army units and special units of the security forces, it is quite popular and amateur shooters who are fond of shooting at long distances. As such, weapons are very popular in Canada and the United States. It is known that an unlicensed copy of this sniper rifle is produced even in Iran, where it bears the name AM50 Sayyad 2.