July 9 2016
14
These days, we remember how 75 years ago, throughout the entire state border of the USSR, heroically fought and died the death of the brave those who first met the enemy. On the front lines in the conditions of superiority of the enemy in manpower and equipment, border guards stood to death. Today I would like to recall and remember the fighters and commanders of the Rebolsky border detachment. One of the outposts was commanded by Lieutenant Nikolai Zykov, a Siberian. 6 July 1941 of the year in conditions of continuous battles and complete encirclement of the enemy during a regular counterattack during the melee, Lieutenant Zykov Nikolai Erofeevich and a group of his fighters died the death of the brave. Exactly 75 years ago ... Remember and remember! 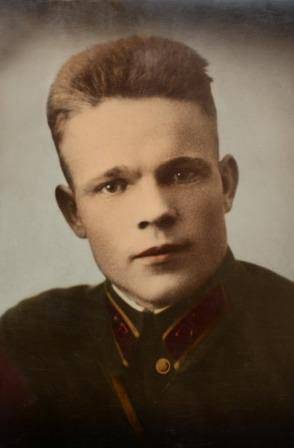 Zykov Nikolay Yerofeyevich was born on December 21 1916 of the year in a peasant family, one of the poorest, in s. Imisskom Minusinskogo County Yenisei province. From an early age Nicholas learned the hard peasant labor. From eleven years in the summer time he worked as a hired wealthy fellow villager. We had to help the mother. The boy was distinguished by a great desire for knowledge. The oldest teachers in the school recalled that Nikolay was in poverty in his grandmother’s teens (teals are traditional Siberian shoes. - AB). Despite the difficulties, Nicholas graduated from the seven-year Imis school almost “excellent”. All those who knew him through joint schooling noted persistence and determination, a tremendous will. He was one of the best students in the school.

From the autobiography, we learn that since 1930, Nikolai Zykov worked on the Red Imiss collective farm. And this is simultaneously with studying at school.

In 1933, a student of the 7 class of the Imis school Nikolai Zykov joins the Komsomol. And in the 1934 year, he, a seven-year-old graduate, enters the Achinsk Agricultural College. After graduation, Nicholas is called into the ranks of the Red Army. From that time and for the rest of his life, he linked his fate with the army. During the passage of personnel service, taking into account the wishes of the fighter, the command sent him to study at the Saratov border school, where he was accepted into the VKP (b). In 1940, with honors and ahead of schedule, N. Zykov graduated from the Border Troops School and was sent to serve in one of the border posts of Karelia. Here was the Soviet-Finnish border.

Service young lieutenant began in the midst of the Soviet-Finnish war. From January to March 1940, he takes direct part in the hostilities. In one of the certification characteristics there are such lines: “In social work is active. Disciplined and serves as an example to others. In relations with comrades and senior in service is polite and tactful. He is demanding of himself, decisive and persevering in his actions. ” According to the recollections of his colleagues, the personnel of the outpost respected the commander and was equal to him in everything.

Anna Ivanovna, N.E.'s wife Zykova, recalled him in her letters: “It was a man of great soul, burning in work. Very caring towards his family and those around him. Always tried to help around the house. He loved his military profession very much. ”

In June, 1941 for the newlyweds of Zykovs, at last, it is time for the first vacation in their family life. After spending some time in Saratov, they planned a trip to Siberia, to the Krasnoyarsk Territory - to the homeland of Nikolai Erofeevich. Were already bought tickets, gifts to parents and brothers. They were about to leave. But 22 June 1941, the Great Patriotic War began, which not only canceled all plans, but interrupted millions of young destinies on take-off. As soon as the message about the war was sounded, the young lieutenant, without hesitation, hurried to the border. In the literal sense of the word "in the vestibules and on the steps" of the cars, he arrived in a couple of days at his outpost.

Arguing about this, his son, a veteran of the armed forces, Colonel Anatoly Nikolaevich Zykov, talks about the possibility of an alternative in the fate of his father. He assumes that if the parents went on vacation a week earlier, then the father could return to Siberia only two or three weeks later, when the border guards were already taken to the rear, and they were replaced by regular units of the Red Army. But “if”! History does not know the subjunctive mood.

This outcome disrupted the unexpected invasion of the Germans, a vacation in June, and not earlier, but, most importantly, the terrific patriotism of Lieutenant Border Guard Nikolai Yerofeyevich Zykov. He was a man of his generation, of his time, a true officer, a self-defender of the Fatherland. And with the declaration of war, he broke through at his outpost through the station crowd of her first days. Far from random is this life stance. On the back of the photo presented here, sent to the mother, Arina Stepanovna, shortly before the war, there is an inscription with the words: “Be sure that your son is ready to give his life at any moment for the cause of the Soviet people, for the cause of the Lenin-Stalin party, for communism ".

With the beginning of the perfidious attack of fascist Germany and allied Finland on the Soviet Union, the personnel of the frontier post of the Rebolsky border detachment, commanded by Lieutenant Zykov, were pushed to the front line. From the first hours of the war, the border guards, fulfilling the order to protect the state border, equipping combat positions, do not allow the enemy to move into the adjacent territory. The fighting in the Soviet-Finnish section of the border began a little later than on the Soviet-German confrontation line.

5 July 1941, the enemy, concentrating up to two infantry battalions and a large number of equipment, launched a decisive attack on the forces of the main and reserve frontier posts. Despite the numerical superiority, the enemy could not succeed. The fighting lasted continuously for several days. Frontier guards several times went on counterattacks. Hand-to-hand fights repeatedly broke out. Lieutenant Zykov, showing an example of courage and courage, skillfully commanded the personnel of the outpost entrusted to him.

On the second day of continuous battles, under the conditions of complete encirclement by the enemy, during the regular counterattack during the melee, Lieutenant Zykov Nikolai Erofeyevich died the death of the brave. The reinforcement arrived in time helped to drop the enemy, and soon the surviving frontier guards were relegated to the rear, and the regular army units entrenched on the state border line.

The current generation of Russian border guards outposts every day before entering the state frontier guards of the Russian Federation pays a minute of silence to pay tribute to and to the memory of those who fell at the mass grave of 1941 border guards of the year. Such was the fate of the fighters and commanders of June 1941. For their unparalleled feat they have not been awarded any government awards. However, it was the frontier guards who were the first to shield the country and "blunted" the tip of the Hitlerite spear Barbarossa.

From the Archives of the Border Troops of the KGB of the USSR (Pushkino, Moscow Region) from 14.11.1981: “Lieutenant N. Ye. N. 1916 year of birth, native s. Imiss of the Kuraginsky District of the Krasnoyarsk Territory, member of the Komsomol since 1933. In 1937, he was called up for active service by the Achinsk District Military Commissariat of the Krasnoyarsk Territory. In 1940, he graduated from the Saratov Border Troops Military School and was appointed head of the frontier post of the Rebolsky border detachment - the city of Reboly. In 1940, N.Y. Zykov participated in combat operations against the White Finns as part of the Rebolsky Porganotryad. Killed in battle 6 July 1941 of the year. " Foundation: F.111., Op.3325., D.1119.

The two brothers of Nikolai Yerofeyevich did not return from the war: Roman and Maxim.