Beach named after a torpedo plant

July 7 2016
25
The fate of the Theodosia (Ordzhonikidze village) of the Gidropribor plant remains in question. Last spring, when after the performance of the Military-Industrial Courier (Torpedo Outpost in the Crimea), the company was included in the republican ownership, it seemed that production would finally get better, a unique experience would be in demand, the traditions would be continued. However, last week an alarming letter came from Feodosia.
The decision to restore the plant is being sabotaged. The historian Oleg Olkhovatsky, the laureate of the “Shield and Sword of the Fatherland” award concerned with this, appeals directly to the first persons of the country. It turns out that the factory workers have no more confidence in anyone.

Dear leaders of the Russian Federation!

The main reason for the appeal to you was the deep concern for the further fate of the oldest torpedo plant in Russia (now GUP RK “Dvuyakornaya Bay”, Ordzhonikidze, Republic of Crimea). As a military historian, winner of the literary award "Shield and Sword of the Fatherland" 2015, for the book "The Secret история of the Gidropribor plant, volume I, researching the plant’s past for decades, I want to draw your attention to the following facts. 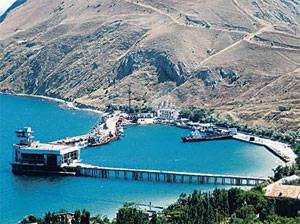 The opening of the Mine Sighting Station in Dvuyakornaya Bay near Feodosia took place on April 8 (March 26 old style) 1914, in the presence of Vice-Admiral P.P. Muravyev, Head of the General Directorate of Shipbuilding, and members of the management board of the G. A. Lessner. With the beginning of the First World War, the plant not only did not stop its work, but also continued the construction of workshops for the production of torpedoes.

In the years of the Civil War and intervention, despite all the difficulties and the complete absence of normal management, financing and supply, factory buildings and basic equipment were preserved by the workers and employees of the plant and mothballed. What characterizes the labor collective to the highest degree. It was already in the years of the Soviet government that the basis for the preparation of the Feodosia Sighting Station to begin the shooting of the 1927 in November was to begin. By 1941, a powerful research and development sector was created, a reinforced concrete protective pier, magnificent workshops, residential buildings for workers and employees were built. The plant has become the main scientific test complex torpedo weapons in USSR. The number of employees reached 1790 people. It produced a serial adjustment of the latest types of torpedo weapons.

During World War II, the plant’s equipment was partially dismantled and removed. Before fleeing from the Crimea, the German invaders undermined a huge amount of ammunition stored in the shops of the plant, with the result that most of the production areas and housing stock was completely destroyed.

Recovery lasted almost three years. Our fathers and grandfathers, sparing no effort, practically without equipment, which simply was not in the ravaged country at that time, overcoming enormous difficulties and hardships, restored the plant. And in March 1948, he joined the number of acting. From 1949 to 1989, the plant continued to grow continuously. New types of torpedo weapons were mastered, experimental work was carried out, housing, kindergartens and medical institutions were built.

After the collapse of the USSR, hard times came again for the factory workers - funding was completely stopped, the mass dismissal of highly skilled specialists and the destruction of workshops began. In independent Ukraine, the plant and its employees were not needed by anyone. The team made incredible efforts to somehow survive and keep it created by decades of hard work. And it was possible despite the complete indifference of the authorities, practically without a penny of money and with frequent changes of the owners of the enterprise.

The exciting events of spring 2014 of the year - reunification with Russia - gave the surviving team great hope for the restoration of the native enterprise. The management of the Bay of Dvuyakornaya JSC made a titanic effort to restore production and test torpedoes. Documents were drawn up, numerous visits to Simferopol, Moscow were made to meet with responsible leaders. Two years of hard work, overcoming the secret opposition of some officials, and finally the matter began to get off the ground. It would seem that a little more and the gates of the plant will open wide for the stream of factory workers, going to restore the former glory and pride of the domestic military-industrial complex. But no - someone invisible again blocks all the efforts and undertakings of the team. It is here that we need the help of the country's leadership in overcoming the latest difficulties: help speed up the transfer of the Dvuyakornaya Bay to the federal property.

I am currently working on the second volume of The Secret History of the Gidropribor Plant. This is the period from 1950 to the present.

It seems to me that the book should not have bitter concluding lines like “it turned out that the unique enterprise of the State Unitary Enterprise of the Republic of Kazakhstan“ Dvuyakornaya Bay ”is absolutely not needed by either Russia or its military-industrial complex. The plant is closed, completely ruined and transferred to the organization of the next private den for modern nouveau riche, without honor and conscience, but with a lot of money. There are more than enough such hotel and entertainment establishments in the Crimea, and the torpedo factory was the only one ”.

So do not allow irresponsible and indifferent officials to prevent the team from actually restoring the plant to perpetuate the memory of our ancestors, relatives and friends, who, overcoming all obstacles, preserved and recreated the company in the most difficult post-revolutionary and post-war years.

I hope that the end of the second volume will be the following words: “The Feodosia plant“ Gidropribor ”as part of the concern“ Sea underwater weapon - “Gidropribor” is again in the ranks of the operating enterprises. We are proud of it. ”