Garrison on the road

July 10 2016
17
The Military Automobile Inspectorate not only regulates traffic on the country's roads in relation to the transport of the Armed Forces, but also performs other important functions. What kind? This and other questions of the “Military-Industrial Courier” were answered by the acting head of the AIT, Colonel Igor Isherkin.


- A few years, as the VAI works on a territorial basis. What are the features, Igor Sergeyevich?

- First, let me remind you that the Military Automobile Inspectorate was formed by a directive of the Minister of Defense 10 years ago. It consists of the VAI MO RF as a management body and regional divisions. Yes, the work is now built on a territorial basis. This means that each of our units ensures road safety in the assigned area of ​​responsibility, as a rule, the subject of the Russian Federation, and in it all military units, regardless of subordination.

What good is the territorial principle of work? Firstly, all military units deployed in the area of ​​responsibility are subject to the same requirements by the unit of the Military Aviation Administration. No own and others, all road users, vehicles of military units, drivers are checked without discounts on subordination. Secondly, the territorial unit of the IAI works in close cooperation with the traffic police department of the constituent entity of the Federation and its units. Thirdly, the heads of the territorial IAI are part of the road safety commissions of the respective constituent entities of the Russian Federation.

VAI, as a rule, is deployed in the regional center, but it can also be in places of the greatest concentration of troops (forces). On average, the distance from the VAI location to the extreme point of the area of ​​responsibility is 150 – 200 kilometers. This allows you to quickly respond to changes in the situation, to travel to military units for technical inspection, verification, classes and other events.

- What changes were made after the resubmission of your military police structure?

The charter of the military police secured the functions and powers of the VAI. There are new tasks:

the implementation in the Armed Forces of control and supervision over the observance of regulatory legal acts in the field of road safety, which establish the requirements for the operational status and repair of roads (facilities) under the jurisdiction of the Ministry of Defense, for the design and technical condition of motor vehicles of the Armed Forces;
coordination in accordance with the established procedure of the routes of movement of military vehicles for the transport of especially dangerous, large-sized and heavy cargoes;
issuance of permits for installation and removal of technical means of traffic organization;
propaganda road safety in the Armed Forces.

The reorganization carried out did not make our work easier, but did, let's say, more interesting, became the next step in the development of the VAI.

- What can be said about the prevention of road accidents? How does VAI do this work? 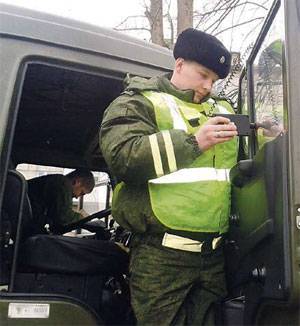 - All functions assigned to VAI are prophylactic in nature. This, in particular, registration of vehicles (TS), control of changes in their design; technical inspection; carrying road patrols; maintenance of the vehicle, traffic control; inspection of military units for the prevention of accidents; propaganda BDD.

As for the new methods, we have been working with the younger generation since 2015: cadets, Suvorovs and Nakhimovites, children from military camps, we teach safe behavior on the streets. We systematically organize quizzes and other events on our own initiative. In Suvorov schools and cadet military corps held a competition of fine art "The road without danger."

Since 2015, interaction has been organized with branches of the All-Russian Motorists Society for the prevention of road accidents and the involvement of military personnel in this organization.

We plan to shoot videos aimed at promoting road safety in the Armed Forces, for subsequent distribution and posting on the official website of the Ministry of Defense. In the same place, we will open a section where we can answer questions, talk about changes in guidance documents regarding road safety, inform about events and, of course, upload photos and videos.

- In the service a lot is regulated by the charter. How is initiative manifested and encouraged?

- I will give an example. In Sertolov, Leningrad Region, the chiefs of the 11 (regional) and 165 (territorial) of the IAI, together with the city administration, regularly hold the contest "The Best Garrison Driver". It would seem an ordinary event, but behind him - a huge organizational work. And most importantly - drivers belong to this competition and the title awarded to it with respect.

- What technique is equipped with VAI?

- In this regard, we are keeping up with the times. Currently, VAI is equipped with evakotyagachi of the KamAZ and Ural brands, UAZ Patriot, Ford Focus, Ford Castom, Volkswagen Karavella, GAZ-2705 Gazelle cars. On the chassis of the latter is mounted mobile point of technical control of vehicles.

Delivery of new types of vehicles is carried out according to the state defense order in accordance with the adopted and approved State Armaments Program. First of all, the renewal of the car park concerns the 100 (territorial) VAI, which is located in Moscow. I would especially like to note that all purchased cars are produced in domestic factories. Since 2015, they began to purchase UAZ Patriot cars. This year, the state defense order provides for the purchase of 40 machines of this brand. To maintain the vehicle in good condition, service contracts have been concluded.

- Do the units of the WAI participate in the Army international games? What is your role in providing them?

- We would love to take part in the Army international games, but there are several reasons why we simply cannot do it.

Firstly, in order to participate in ARMI-2016, it is necessary to set up subunits, however, unfortunately, due to the small number we cannot send them even for several days. Who will perform tasks, provide duty and protection?

Secondly, in the Games, our main role is road safety (vehicle escort, regulation). Every year, for special events during the Games, we employ more than 100 people and more than 50 patrol cars.

Thirdly, given the different laws of the countries, the procedure for regulating traffic, competition can be arranged only for driving, but it will be biased.

All this does not prevent us from identifying the best VAI inspectors and improving our professional skills. In addition, every year after the end of the Army International Games, as a rule, in September we hold the contest "The best inspector of the All-Russian Aviation Association".

- How is the interaction with the traffic police and other federal executive bodies in the interests of road safety organized?

- It is the closest both in the registration of road accidents and in the registration of vehicles, ensuring their maintenance, carrying out the road patrol service, searching for detained and hijacked vehicles. The issues of interaction are enshrined in the regulatory legal acts, the Charter of the military police of the Armed Forces of the Russian Federation, joint documents. A draft joint order of the ministers of defense and internal affairs “On approving instructions on the procedure for interaction between the Armed Forces and the internal affairs bodies of the Russian Federation in the field of road safety and in the movement of troops” has been developed and is being coordinated at VAI MO RF. He will remove many questions that still remain.

Interaction with federal executive authorities, in which military automobile inspections also exist, has been organized. These are the Ministry of Emergency Situations and the Federal Service of the National Guard. There is an experience of conducting joint inspections of military units with the Main Military Prosecutor's Office regarding the observance of legality in the field of road safety. As for the collection of fines from officials who have committed administrative offenses, it is carried out through military courts and the Federal Bailiff Service.

- A staff member is not the largest category of military personnel. Where and how are such specialists trained, what are the requirements for them?

- From 2015, on the basis of the Omsk Automobile and Armored Engineering Institute for the Military Aviation Inspectorate of the RF Armed Forces, training is being conducted on an additional professional advanced training program. 20 officers have already completed this course. And from September, the 2016, at the Ryazan Airborne Command Military School, will be annually trained warrant officers for the needs of the VAI - 60 people. All the necessary information about the procedure, conditions of admission and terms of training is given on the official website of the Ministry of Defense (mil.ru) in the section "Education".

Starting from 2010, every VAI soldier is obliged to take summer and winter courses in emergency driver training, as a rule, at the Center for Higher Driving Excellence of Professor Tsygankov. The frequency of such training - at least once every three years.

VAI officials, the specifics of the tasks to be performed which are related to the monitoring of the condition of vehicles, are trained in the Expert Control and Diagnostics Expert program. This is at least 20 people annually.

In order to constantly improve the level of professional training, the prestige of our service, as well as inspecting personnel, a competition "The Best Inspector of the Military Automobile Inspection" has been held since 2015. Based on the experience gained, we have complicated and expanded the test program, the number of nominations, including team ones. And also invited to participate on an out-of-competition basis colleagues from the IAI of other federal executive bodies. The FSVNG responded to our appeal. Colleagues put up a team of three of them. Three people will also take part from each WAI (regional), that is, from each military district, Northern fleet and 100th WAI, 21 contestants in total. Competitions will be held at the base of military unit 20155 in Ostrogozhsk, Voronezh region. Last year, prize inspectors from Moscow and Kaliningrad took prizes.

- One of the most painful issues - the accident rate on the roads. What is the situation with the vehicles of the Armed Forces over the last, say, five to seven years?

Serious work is also being done on road accident prevention with the participation of private vehicles of servicemen and civilian personnel of the Armed Forces of the Russian Federation, where the situation is not so simple. A systematic approach has been organized to the activities of command and control agencies, primarily commanders of military units, on this issue.

Today it is impossible to imagine a single military unit, not a single model of heavy weapons without a car chassis. From the competent use of technology depends not only the life of the driver, but also the people around them. It remains to wish that the official vehicles did not know the breakdowns, and the personal vehicles of the servicemen brought them only pleasure while driving.

Ctrl Enter
Noticed oshЫbku Highlight text and press. Ctrl + Enter
We are
We strive for trouble-freeMilitary reform as an integral part of the security concept of the Russian Federation: Systematic dynamic assessment
Military Reviewin Yandex News
Military Reviewin Google News
17 comments
Information
Dear reader, to leave comments on the publication, you must sign in.