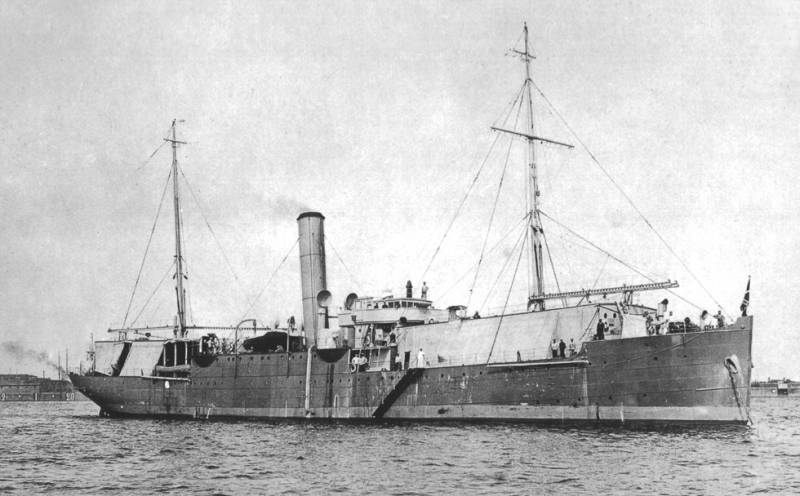 Exactly 100 years ago, the Russian naval baptism took place aviation. On the morning of July 4, 1916 (according to a new style), the battleship Glory and the destroyers Siberian Shooter and Hunter fired at German coastal batteries near Cape Ragots on the southern shore of the Gulf of Riga. The air cover was carried out by four M-9 flying boats from Orlitsa air transport.
At about 3:00 in the morning, three German Friedrichshafen FF.9 float seaplanes and one Brandenburg FB flying boat from the navigation station on Lake Angern attempted to bomb the ships.

Exactly 100 years ago took place the baptism of Russian naval aviation. On the morning of July 4, the 1916 of the year (in a new style), the battleship Slava and the destroyers Siberian Rifleman and Hunter made shelling German coastal batteries at Cape Ragots on the southern coast of the Gulf of Riga. The air cover was carried out by four M-9 flying boats from the Orlitsa hydraulic vehicle.
At about 3:00 in the morning, three German Friedrichshafen FF.9 float seaplanes and one Brandenburg FB flying boat from the navigation station on Lake Angern attempted to bomb the ships.

At this time, a squadron patrolled M-9 with the number SCHS-12 under the control of the pilot Second Lieutenant A.N. Izvekova and sideman non-commissioned officer A.V. Nazarov. When enemy vehicles appeared above the horizon, three more seaplanes started to intercept, but Izvekov, not waiting for them to gain altitude, entered into battle alone to prevent the Germans from dropping bombs. In this unequal battle, our crew died. Incendiary bullet pierced the gas tank, the plane flared, rolled over, fell into the sea and sank quickly.

However, flying boats of the ShchS-11 (pilot midshipman B. Shchepotiev, shooter noncommissioned officer A.A. Shepelev), ShchS-13 (pilot lieutenant S.A. Petrov, gunner noncommissioned officer NP Korshunov) and SchS-14 (pilot midshipman GG Kartsev, gunner mechanic Yarantsev) managed to equalize. SchS-13 from close range shot from a machine gun "Friedrichshafen" with a "sinister" tail number 666. The German crew in the composition of the pilot, Lieutenant von Siebourg and gunner-scorer Oberleutant Meyer managed to land the damaged car in the water next to the Russian ships and was captured.

Two more enemy hydroplanes were damaged and left, planning with non-working engines, to its shore. However, they are not listed in the lists of German losses, obviously, they managed to successfully splash down. As a result of the battle, the enemy raid was blown off, not a single bomb hit the ships, but this success was overshadowed by the death of two Russian aviators.

Kstiti, with this air battle there is a rather ridiculous incident. In 1996, then Defense Minister Igor Rodionov, confusing the old style with a new one, issued an order according to which July was announced as the Day of Russian Naval Aviation. In the order, this date was timed to the first battle and the first air victory of the Russian sea pilots. However, 17 July is the fourth of July in the new style, and according to the old chronology in force in the 17 year, the battle took place on June 1916. Thus, due to the ignorance or negligence of Rodionov and his referents, the holiday turned out to be “pushed” 21 days from the real dating of the event. Surprisingly, this error has not yet been fixed.

On the screen saver - air transport "Orlitsa" with hangars for seaplanes on the upper deck. This aircraft carrier was converted in 1915 from the Empress Alexander transport steamer. In addition to the aircraft, he carried eight 75-mm guns, so he was sometimes called the “hydro-cruiser.” 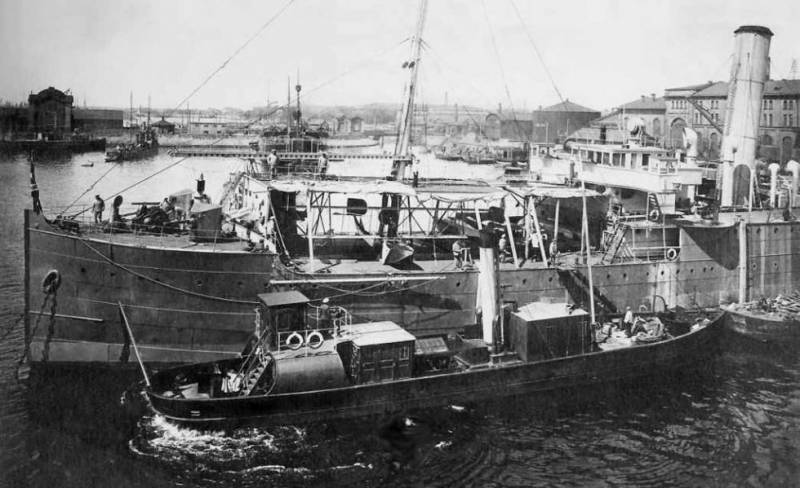 “Orlitsa” with an open hangar in which FBA flying boats are visible, later replaced by M-9. 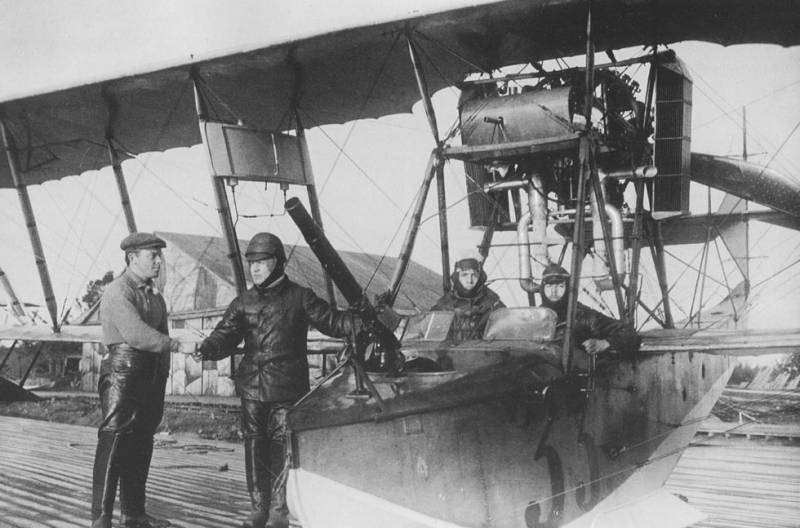 Crew M-9 of the Baltic Fleet. On the nose of the aircraft mounted machine gun "Lewis" infantry model. 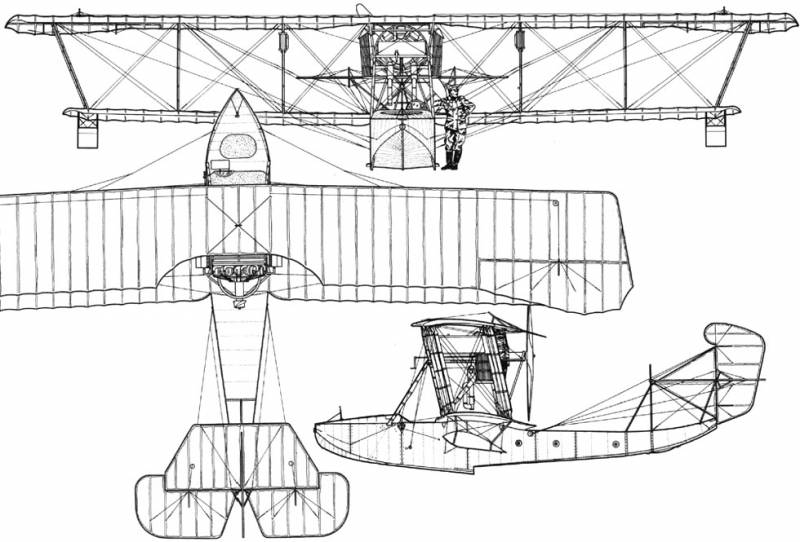 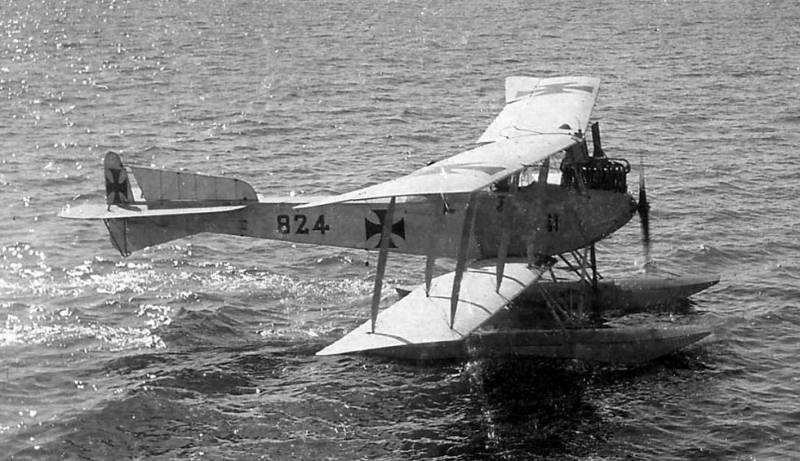 "Friedrichshafen" FF.33. A seaplane of this type was shot down by Russian pilots 4 July (21 June) 1916 of the year over the Gulf of Riga.

Another combat participant is the FB. Brandenburg flying boat.

Ctrl Enter
Noticed oshЫbku Highlight text and press. Ctrl + Enter
We are
The development of the military-industrial complex of the Russian Empire in the years of WWIIcy embrace of the North. Soviet submariners is dedicated
Military Reviewin Yandex News
Military Reviewin Google News
1 comment
Information
Dear reader, to leave comments on the publication, you must sign in.