“16 June 2016 was opened a memorial plaque in honor of Karl Mannerheim in St. Petersburg on the building of the Military Engineering and Technical University (VITU) at Zakharyevskaya Street, 22. 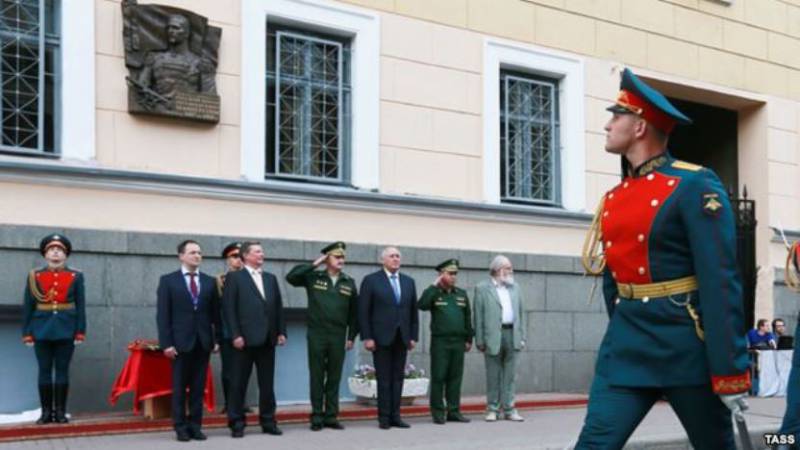 We believe that the perpetuation of the memory of Hitler's ally in the city, who survived the fascist blockade, in which Mannerheim took an active part, directly offends the memory of hundreds of thousands of victims of the Leningrad blockade and hundreds of thousands who died in the defense of the city. The installation of the board causes a great public outcry among living blockaders and veterans, and tens of millions of their faithful heirs, who consider this fact a personal insult and an insult to memory.

If memorial plaques are installed in the Russian Federation such as Mannerheim, this means that the people DO NOT honor the memory of their ancestors, this means that the ancestors did not give us neither love, nor respect for the Fatherland, nor faith in good and, moreover, justice and, accordingly, does not adopt the Constitution.

The personality and activity of Karl Mannerheim has been studied in detail by historians and it has been reliably established that all of his military leadership services are related to the military actions of Finland against the USSR during the Second World War. And their main content is to help the troops of Nazi Germany in the Leningrad region.

Published historical documents and the results of detailed studies by authoritative Russian and Finnish historians conclusively prove that in the history of Leningrad - St. Petersburg K.G. Mannerheim:

(1) is personally an accomplice and co-author of the planning and implementation of the blockade of Leningrad, leading to hundreds of thousands of civilian casualties;

(2) is personally the author and leader of hostilities aimed at the destruction of the “Road of Life”, which supplied besieged Leningrad.

Mannerheim, as commander-in-chief of the Finnish army, even before the start of the war, took part in the development of a plan for a joint German-Finnish attack on Leningrad. The aim of the Finnish offensive was precisely Leningrad, and not the old Soviet-Finnish border. See about this research: A. Rus (Lehdistosensuuri jatkosodassa. Kokemaki, 1982), P. Talvela (Sodlaan elama. Muistelmat. Osa l. Jyvaskyla, 1976), Oh. Jussila, S. Hentil, Y. Nevakivi (The Political History of Finland. 1809 − 2009. M., 2010), A.R. Dzeniskevich (Blockade and Politics: The Defense of Leningrad in the Political Situation. St. Petersburg, 1998; and others;

Finnish troops under the leadership of Mannerheim held the northern half ring blockade of Leningrad. In early September, 1941, the Finnish troops everywhere crossed the line of the old border on the Karelian Isthmus and advanced further to a depth of 20 km. Finnish troops stopped at the line of the Karelian fortified area. However, the distance from the Finnish troops to the city outskirts of Leningrad was at least 19 km. which did not allow the Finnish troops to use the artillery on their armament for shelling Leningrad. See the documentary indication of the front line: Field Administration of the Leningrad Front. The situation map on the front of the 23 Army by the end of 11 in September 1941. - Archive of the Ministry of Defense of the Russian Federation. F. 217. Op. 1221. D. 33.

Finnish troops under the personal command of Mannerheim attempted to organize the second ring of the blockade of Leningrad - around Lake Ladoga. Objective: to cut the communications of the besieged city on Lake Ladoga and cut off supplies through the White Sea-Baltic and Volga-Baltic canals. Finnish troops were stopped only as a result of the heroic resistance of the Red Army at the turn of the Svir River. The attempt to close the second ring of the blockade was not crowned with success, but the most important communications through which food could be delivered to the blocked Leningrad (Volga-Balt and the White Sea-Baltic Canal) were blocked by the Finnish army. See about this: Mannerheim, Karl Gustav. Memoirs. M .: Vagrius, 1999; A. Isaev, V. Other. 1941. From the border to Leningrad. M .: Yauza, Eksmo, 2011; and etc..

Under the personal leadership of Mannerheim in 1942, a united German-Finnish was formed on Lake Ladoga flotilla. The General Instructions for the Activities of the Ladoga Fleet Detachment during Navigation of 1942, signed by Mannerheim on January 22, 1942, said: "Special attention should be paid to offensive operations against enemy communications taking place in the southern part of Lake Ladoga." (See: Central Naval Archive. F. 2. Op. 028571. D. 2). Thus, Mannerheim personally ordered the flotilla to attack the Leningrad Road of Life.

The situation is similar to the installation of the board Mannerheim is widely known. The bas-relief and the memorial plaque to the ataman Naumenko were installed in the stanitsa of Petrovskaya, Slavyansky district of the Krasnodar region. On the board it was stated that the ataman is "a talented military leader, military historian, ataman of the Kuban Cossack army in exile."

It is necessary to pay tribute to the prosecutor's office, which filed an administrative lawsuit against the municipal authorities of the Slavyansk region of the Krasnodar Territory about dismantling the bas-relief and board to the Nazi collaborator, and won the case, proving that while in exile, General Naumenko cooperated with the Nazis (information from the website of the General Prosecutor's Office of the Russian Federation).

We believe that in the case of Mannerheim it will be absolutely legal and fair to make a similar administrative action in the interests of an unlimited circle of persons.

Considering the above, as well as the colossal outrage of the public about perpetuating the memory of the accomplice of the fascist K. Mannerheim in St. Petersburg, we ask you to give instructions to conduct a prosecutor's check, give a legal assessment of the facts established during it and take measures to protect the memory of ancestors who gave us love and respect for the Fatherland, faith in good and justice».