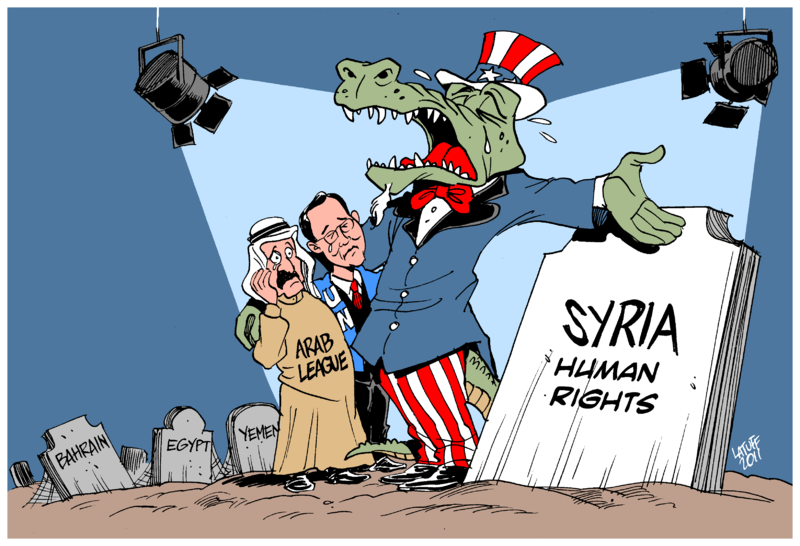 Nevertheless, one grouping that best fits the category of “good guys” still exists, and this is the Free Syrian Army (FSA), which focuses almost exclusively on the fight against the “Islamic State”. It is funded by the Pentagon, and British and American special forces are involved in the training of its fighters.

“Attempts by the Pentagon to arm and prepare Syrian rebels to fight the Islamic State, for which 500 millions of dollars were spent, failed, but they left only a small grouping,” wrote the Washington Post about the SSA. Telegraph noted that "experts call the SSA a rare example of success."

However, Russia inflicted an airstrike on the SSA, despite the presence of American bombers. America began to complain about Russia's behavior in Syria even before the Russians bombed the positions of the SSA. 15 June US Secretary of State John Kerry complained irritably that Russia and the Assad regime do not comply with the truce terms set forth in UN Security Council Resolution No. 2254. "We are not going to sit and watch Asad continue to attack Aleppo, and Russia continues to support him in this," the head of the State Department said.

“Russia needs to understand that our patience is not unlimited - on the contrary, its supply is limited,” he warned.
The CCA was protected by a ceasefire agreement. However, the very next day after Kerry declared that America was losing patience, Russia struck the SSA positions at the Syrian-Jordanian border, in the area of ​​the At-Tanf border crossing.

Previously, Russia in these places did not bomb anyone; they, too, are not considered a hotbed of terrorism. The Russians simply decided to strike at one of America’s closest allies in the region — and put a lot of effort into this.

The American forces immediately involved an emergency line with the Russian command post, created by the parties, so that any misunderstandings could be quickly resolved. Nevertheless, the Russians ignored the demands to stop the bombing, and then the United States lifted a pair of fighters into the air.

When F / A-18 appeared over At-Tanf, the Russians had gone away — either to avoid the American bombers, or because they ran out of fuel. While the F / A-18 remained in the air, Russia did not approach At-Tanfu. However, once the Americans went to refuel, Russian aircraft returned for a new bombardment. The US military again used the emergency line. No reaction. The American air command post directly contacted Russian pilots by radio. No reaction.

Stratfor is an organization not prone to exaggeration, writes: "From any point of view, this is arrogance on the part of Russia."

Perhaps it is much worse. Apparently, during the bombing the Russians used prohibited cluster incendiary bombs. Russia has repeatedly denied that it uses such ammunition. However, at some point, the Russian state channel RT revealingly scored an own goal, demonstrating in its material how these bombs load Russian planes in Syria. Later, the channel deleted this material, and as a result, they began to accuse him of covering war crimes.

The SSA claims that Russia has used this forbidden against it. weapon - and reinforces its approval with photographs.

Former military pilot L. Todd Wood writes to the Washington Times: “To be honest, there are a number of troubling issues with this incident. To begin with, the American aviation Could not hold air superiority for a long time. Further, President Obama dispatched two aircraft carriers to the Mediterranean to insist on and wipe his nose to Russian President Vladimir Putin. In response, Putin hit an American-backed organization, openly refuting the idea of ​​American military superiority. This allows Putin to look good in the eyes of his own population and the world and give the impression of a strong leader.

Why two aircraft carriers did not cope with this situation? Perhaps the case in the rules of use of weapons? Or in the intervention of the administration? Maybe the US military is simply exhausted? Or maybe we just had no luck? It looks like something rotten in Denmark - that is, in Syria.

The fact that Russia has shown this administration, who is the head of the Middle East, cannot but be disturbed, but our media are silent about it. ”

How did America react to the Russian "impudence"? CBS News reports: “Staff members of the Secretary of Defense Carter noted that he was outraged by the actions of Russia. However, he publicly limited himself to calling these actions unprofessional. ”

“Non-professional” and “doubtful” are the strongest words that US officials have publicly used to characterize Russian stocks.

Despite Kerry's words about “limited patience,” Russia's behavior hasn't had any consequences, although two weeks have passed since then. America’s reaction has been reduced to soft reproaches and video conferencing, during which American officials “expressed deep concern.” Perhaps next time America will decide to bring the matter to a written response in sharp terms.

With this bombardment, Russia made it clear to the belligerent Syrian groups - and at the same time to the whole world: you should not get involved with the United States, they will not protect you, it is more useful to negotiate with Moscow.

Stratfor noted that “Russian strikes could undermine the morale and appeal of the New Syrian Army, questioning the ability of the coalition led by America to defend this organization.”

Thus, Russia continues to follow the same strategy, which it has been guided by, at least for the last decade. It diligently undermines America’s reputation, demonstrating to the world that the United States is not fulfilling its promises.


“Ultimately, any superpower's most valuable asset is trust in it,” wrote David Blair, the chief international correspondent for the Telegraph, during the “red line” scandal. - If the strongest country in the world threatens with something, provides its guarantees or conducts a “red line”, it should be ready to confirm its words with a deed. Otherwise, this priceless asset will be tainted - and, perhaps, forever. ”

“At the moment, a lot of horrible things do not happen in the world only because of the meaning that the word America has,” he explained. “North Korea does not invade South Korea, China does not lay hands on the disputed islands, Russia does not threaten the Baltic states.”

Now this trust is greatly undermined. As a result, China began to tidy up the controversial island chains, and many seriously fear that Russia may try to seize one of the Baltic countries.

International Relations Specialist Hans J. Morgenthau noted in his book Political Relations among Nations (“Politics Among Nations”) that “maintaining prestige ... is an integral part of a rational foreign policy”. Why? "What others think of us is no less important than what we are." If America is considered strong, it does not need to prove its strength with a weapon. Her words are enough. But if the strength of a country — or its willingness to back up words with deeds — is doubtful, then that country may be forced to use an army.


If we briefly formulate the main Russian foreign policy strategy, it will be reduced to a simple maxim: you need to attack the prestige of America. Surprisingly, Russians succeed in this. California alone has an economy - more than the whole of Russia, and if we add Texas to California, we will get two Russian economies. Judging by the numbers, Russia is unable to damage American prestige.


However, it is not only capable, and that is exactly what it does. By harming the prestige and reputation of the United States, it actually reduces American power. In Leviticus 26: 19, God warns America in case she does not obey him: "I will break the pride of your power" (in the Synodal translation, "I will break your proud stubbornness", - comment transl.). America has the power, but it lacks the will to use its power. It is this lack of will that inspires courage in the enemies of America all over the world.