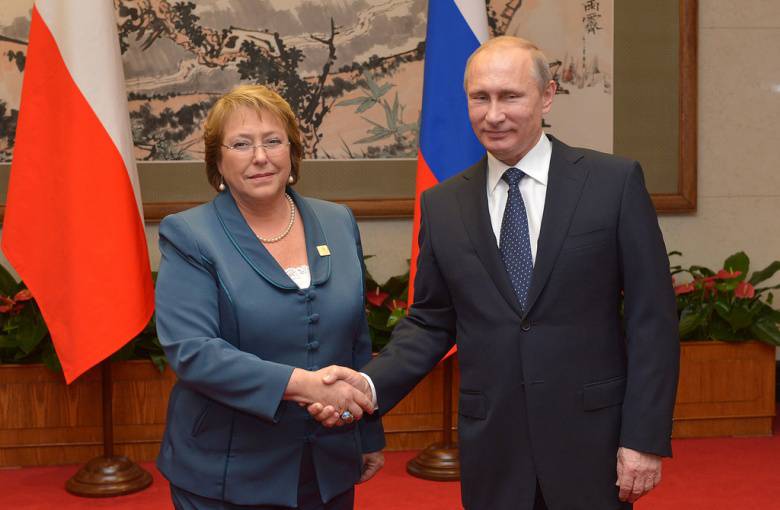 The Chilean government, having launched an offensive on the political, economic and military fronts in order to present the country as a reliable and attractive partner in Latin America, has come closer through various initiatives with the Russian Federation, setting aside traditional relations with the United States, which may be repeated in neighboring countries.

Such a decision by Chile is aimed at building a strategy to curb the foreign policy of the Bolivian government, which, with its active diplomacy combined with effective communication policy, pushes the Chilean foreign policy agency into the corner, be it to the International Court of Justice in The Hague over a territorial dispute over ocean access or disagreement on the status of the river Silala. To this is added the decision to purchase Russian weapons peruvian government which has a long history relations with Russia from the 70 of the twentieth century, when this country was part of the Soviet Union.

The government of Bolivia, led by Evo Morales Ayma in November 2015 of the year, at the Forum of Gas Exporting Countries in Tehran, held talks with the Russian delegation headed by Vladimir Putin regarding various areas of possible cooperation, mainly military-technical, but also in the field of engineering and electricity, in high-tech projects and the energy sector on the basis of contracts with the largest Russian producer and exporter of gas - the state corporation Gazprom. In addition, Putin promised to support the Bolivians in the construction of a nuclear technology center in Alto de la Paz by the Russian Rosatom holding company, which “will install a research reactor and a synchrotron for gamma rays in the center under construction, and Russia will provide the technology, and Bolivia invests 300 million dollars, ”as reported by President Morales himself. Thus, the first step was taken towards a new foreign policy strategy in which Russian participation prevails over the traditional American one for the countries of this region.

This package of agreements was supplemented by new documents in the military sphere in April 2016, when the head of the Bolivian foreign office, David Choquehuanca, during his official visit to Moscow, met with his Russian counterpart, Sergey Lavrov, to discuss one of the most important topics on the agenda the day of the Russian-Bolivian Commission for Military-Technical Cooperation: re-equipping the Armed Forces of Bolivia with armored vehicles, artillery guns and combat aircraft.

Peru, in turn, also showed interest in acquiring new tanks T-90S, the effectiveness of which was confirmed in the battles against terrorist groups in Syria. The Peruvians decided to buy a hundred of these tanks to replace the already obsolete T55, purchased 45 years ago, while the new ones proved to be excellent during a demonstration at the arms salon in Lima in 2013, showing efficiency and mobility on stony Peruvian soil. The military from Peru visited Russian training grounds to make sure on the spot the quality of the T-90S armor, which deserved their most rave reviews. In addition, Russia proposed that Peru build an assembly shop for AK130 rifles and BTR 80 armored personnel carriers in the territory of the South American country as part of the Peruvian Army armored vehicles maintenance complex, in agreement with the Russian company Rosoboronexport.

The Russian Federation, which is interested in opening new markets to its economic, technological, energy and military potential and in winning back spheres of influence from the United States, who still, despite some changes and the desire for greater flexibility of imperialist policies in Washington, consider Latin America to be “backward” backyard ”is not too picky for the next client, and she doesn’t care about this client’s internal relations with other potential clients. As, for example, the relations of Chile and Bolivia, complicated already by century territorial disputes. First of all, because Russia estimates the Latin American arms market - where the start of deliveries to smaller countries will push such giants as Venezuela, Mexico, Argentina or Brazil, to acquire Russian helicopters and air defense systems - more than 30 billion dollars for the next five years. Only Rosoboronexport from 2002 to 2014 sold weapons to 14,5 billion dollars to Latin American countries.

Already in April, 2015, the Chilean Foreign Minister, Heraldo Muñoz, visited Moscow to discuss with his colleague, Sergey Lavrov, the possibility of expanding Russian-Chilean relations, primarily economic ones. And also their expansion to the Eurasian Economic Union, which in addition to Russia includes Belarus, Kazakhstan and Armenia. The trade turnover between Chile and Russia amounts to billions of dollars, and both countries have shown interest in deepening and strengthening ties in the same areas as with Bolivia a year earlier: the energy sector, high technology, the mining and space industries. A pragmatic Russia uses these agreements, among other things, to offer new items to its military-industrial complex, having been baptized in Syria.

As part of these agreements, agreements were reached on the procurement of the Sukhoi Superjet 100 Sukhoi Superjet aircraft, presented at the International Air Show in Santiago de Chile (FIDAE) in late March and early April 100, the Russian manufacturer’s plan includes the production of a significant part components in the Islamic Republic of Iran, thus involving a large number of players in this dynamically developing area, which will bring not only economic but also political and geostrategic dividends. During the Chilean air show, Anatoly Punchuk, deputy director of the Federal Service for Military-Technical Cooperation (FSMTC), said that the military leadership of a Latin American country — now very much criticized for the corruption of its ranks, in particular, the great state — is ready to expand cooperation with Russia in arms procurement, mainly helicopters and the Safe City systems.

Several years ago, Russia modestly knocked on the doors of the Chilean foreign ministry and army leadership, which knows no need thanks to the controversial "Copper Law", according to which the 1,5 billion of extrabudgetary funds are deducted annually to the Armed Forces. Without a doubt, this is an appetizing trophy. Then the FSMTC director Alexander Fomin told the Chilean and Russian media: “We are negotiating the supply of various types of weapons and civilian products, starting with firearms and ending with an amphibious aircraft, passenger MS-21 and XJUMX Superjet. We know that Chile has traditionally purchased weapons from Western manufacturers, but we are trying to reverse this trend due to the qualities of Russian weapons such as reliability, ease of use, and value for money. In addition, unlike our Western colleagues, we offer to collect our weapons on Chilean territory, which is undoubtedly an important attractive feature of our future contracts. ”

The FIDAE showroom certainly served as a forum that anticipated the next step of the Chilean military, who, of course, are counting on the support of the new government under the leadership of President Michelle Bachelet - a trip to Russia for a detailed study of a number of aspects of bilateral cooperation in the military sphere. During the week of June of this year, a delegation of the Armed Forces of Chile, led by their Commander-in-Chief, General Umberto Oviedo (Humberto Oviedo), visited the Military Academy of the General Staff of the Armed Forces, the Military Medical Academy, laid flowers at the grave of the Unknown Soldier at the Kremlin wall and visited landfills, in practice, getting acquainted with the characteristics of Russian armored cars and tanks. Oviedo met with the Commander-in-Chief of the Ground Forces of the Russian Federation, Colonel-General Oleg Salyukov, with the aim, as follows from the press release of the Russian Ministry of Defense, “to explore the prospects for military cooperation, emphasizing the training of Chilean officers in Russian training centers and the participation of Chilean military personnel in the International Army games in 2016 year. By all indications, the trip was a success.

How strange it is to see this turn of the army, closely connected with the United States, towards Russia! Indeed, after the end of World War II, the Chilean army was built in the image and likeness of the American. Its officers were part of the infamous Doctrine of National Security, were trained in the “School of the Americas”, known for its ideological drill and teaching torture techniques for use against the so-called “internal enemy”, and now, after this historic twist, officer cadres, perhaps will be prepared in Russian training centers.

Recall that the Chilean army during the cold war was a loyal dog in the service of the American owner and stood up for Washington in Latin America. No wonder it was in Chile that the elite units of dictatorial regimes were trained in El Salvador, Nicaragua, Guatemala in 80. And besides, some of these officers were the backbone of the Condor plan, aimed at destroying the opposition through a joint operation involving intelligence services from Argentina, Brazil, Uruguay and Paraguay.

The convergence of the army leadership of Chile with Russia took place in the Air Force, also formed and trained in the USA, whose commander-in-chief, General Jorge Robles, met with the representative of Russian defense enterprises Alexander Fourasiev. According to the ministry, “in order to develop military-technical cooperation between our countries,” the Chilean Air Force is planning to acquire Mi-17B-5 helicopters, Cornet-EM anti-tank systems, AGS-30 grenade launchers, “Bur” grenade launchers, ZRK Pechora-30М and self-propelled anti-aircraft missile-gun systems "shell". They also discussed the production of drones from components made in Chile, the joint production of submarines and R-2E air-to-air missiles for equipping Chilean combat aircraft and training T-73 Pillán with them.

Cooperation between Russia and Chile after the advent of democracy is based on two agreements. One was signed on November 19, 2004 and approved by the National Congress of Chile in June 2014 under the title “Agreement on Military-Technical Cooperation between the Governments of the Republic of Chile and the Russian Federation” in the field of supply, modernization and repair of weapons and military systems, including aviation equipment, radar systems, ships and other watercraft, as well as other military items. The agreement also covers training programs for military specialists, joint research projects in the field of development and testing of weapons systems, joint production of military products for the assembly of their own Armed Forces and for export. And this is not a complete list.

Another agreement was adopted under the already mentioned cooperation agreement and entered into force on November 25 2014 under the name “Agreement between the Government of the Russian Federation and the Government of the Republic of Chile on the mutual protection of secret information in the field of military-technical cooperation”. 12 years of negotiations, official and secret meetings, meetings in Moscow and Santiago, field trials and carrots and sticks, which concern not only the Chilean army, but also countries that have unresolved conflicts with Chile, like Peru and Bolivia and also need to be supplied weapons.

Russia is rubbing its hands, because both its military industrial complex and its strategy of reconquering the territory from Washington and its allies gains from this. It will not be surprising to see Chilean officers practicing the technique of military art at the ranges of the Russian army, the successor of the Soviet, the sworn enemy of the United States, who will certainly try to put pressure on countries that they considered reliable customers. At the beginning of the fourth five-year plan of the 21st century, the English “thank you” gives way to a Russian “thank you” in the area of ​​concluding contracts for the supply of military products. Goodbye Uncle Sam! Welcome, Russian bear! At least in the military sphere, because in the economic sector all the chips are still placed in accordance with the American model, which was confirmed recently at the summit of the Pacific Alliance held in Puerto Varas in southern Chile with the participation of seven presidents and representatives of 49 countries observers.