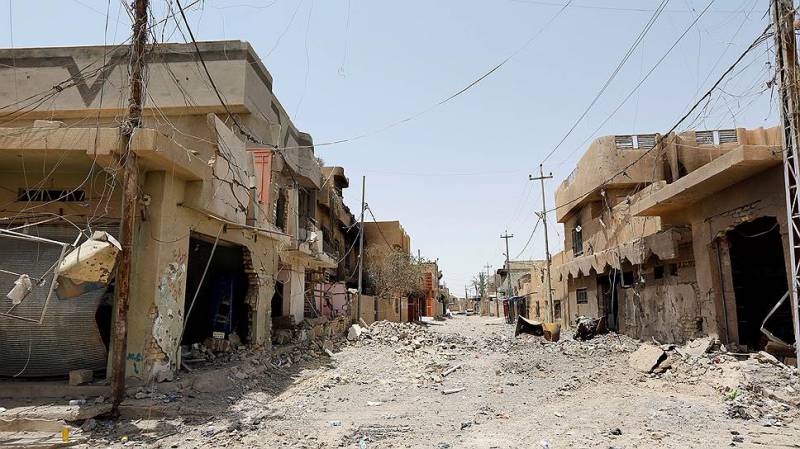 This tactic almost never fails. The Islamic State (prohibited in Russia) is the most active since it has been used by foreigners from the Persian Gulf and the CIS countries. To the greatest extent, the Iraqi army experienced it in the bloody battles for the liberation of the city of Fallujah in May and June of this year. It was again confirmed that the IG pipeline, almost on an industrial scale, has a system for training Ingimas troops, a real elite among suicide bombers. It was because of their actions that the operation to liberate the city got out of schedule and lasted much longer than planned in the Iraqi General Staff.

The same tactics were used by jihadists in early January near Tikrit, the hometown of Saddam Hussein, when two militants blew up cars at the gates of the former American military camp Camp Spicher and three more — their suicide belts. 12 killed Iraqi security personnel.


In Syria - a similar situation and the same problems for the forces fighting ISIS. In the second half of June this year, the Ishilovites organized a powerful counterattack in the west of the province of Raqqa against the Syrian army using tanks, artillery, armored jihadmobiles and ingimashi. The latter broke through any defense, after which the bulk of the militants completed the rout. Filled to the eyeballs with explosives, laden with iron sheets, trucks, bulldozers and tractors rushed at full speed into the thick of Syrian government troops and militias. The explosions were so strong that the elements of armor scattered hundreds of meters. As a result, the units loyal to Bashar al-Assad could not restrain the onslaught of the “jihad warriors” and retreated from the province of Raqqa, where the capital of the self-proclaimed caliphate is located.

Ingimasi are detachments of not only the most fanatical, but also the most trained terrorists. In Russian, the word can be translated from Arabic as "exploding." These are not simple shahids (ishishhadi). When approaching the enemy, they undermine themselves, trying to inflict maximum damage to manpower. Moreover, in contrast to the izishkhadi, who purposefully go to death, self-exploding in the thick of the enemy is not an end in itself for them, but is used only in a hopeless case.

Their standard equipment is an automatic rifle, frag grenades and a suicide belt. With success, the Inmashi calmly complete the mission and return to the base. Sometimes they use cars with remote control and explosives. Among the tasks assigned to Inmashi are the seizure of particularly important objects, the elimination of enemy commanders, the destruction of military equipment. Operations are targeted and planned in advance.

“We are dealing with the evolution of jihadism,” Alexey Malashenko, chairman of the Religion, Society and Security program at the Carnegie Moscow Center, explains to Kommersant. “He is becoming more pragmatic and should not be treated as fanatics by these guys. professional terrorists. They are not just preparing to die and beautifully sacrifice themselves, but consider themselves fighters who don’t have to die at all. m, as a kind of deviation. But only recently their ideology and professional training began to receive recognition. This is a global trend, it will spread and, I am afraid, sooner or later it can touch us. "

“There is no antidote to Inmashi and this tactic, and it is not known when it will be found,” Mr. Malashenko believes. “You can’t stop them either, and you won’t destroy their accumulation sites, because there are no places as such.”