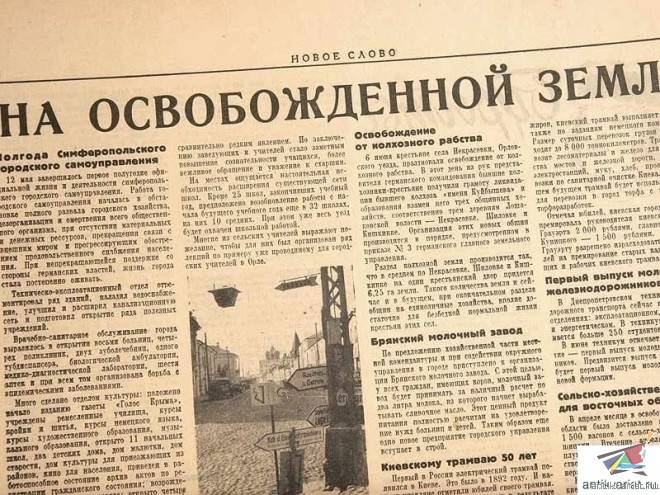 In July, 1942, the Germans occupied the city of Azov. Joseph Chernov received a pass from the Germans and 8 on August went to Taganrog on foot, where, according to him, four churches were already opened. A few days after arrival, the bishop was summoned to the burgomaster, where he was asked to receive registration as a priest. After receiving it, August 27 1942, he began to serve in the Holy Cross Church bishop's church. 28 August Vladyka Joseph consecrated Nikolsky Cathedral. “Now, with the help of a group of believers and a burgomaster, he again becomes a place of raising prayers,” the local collaboration press reported on this issue (the article “Consecration of Temples in Taganrog” was published in the newspaper Novoye Slovo. ”1942 year. 1 September, No. 73 (76). 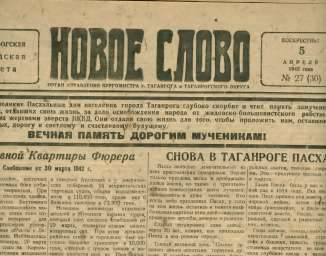 At the consecration, a number of honored guests attended, led by the burgomaster Dieter and his deputy Akimtsev. Before the consecration of the cathedral, Bishop Joseph was called to the propaganda department, where he was offered to read a speech to his fellow citizens. But later Chernov said that he refused to read a speech written by a German officer, like his own sermon. “This document set forth the slander against the Orthodox Church and against Metropolitan Sergius,” Chernov said later during interrogation in 1945.

The interrogation report contained in the investigation file gives the following explanation of the reasons for refusal:

“Question: Did you give your consent to the head of propaganda to make a pro-fascist and slanderous speech?

Answer: I gave my consent to the head of propaganda to speak in front of the citizens of Taganrog with a pro-fascist and slanderous speech.

Question: What prevented you from fulfilling this task of the head of the department of fascist propaganda?

Answer: Nothing prevented me, I simply did not fulfill the tasks of the head of propaganda.

Question: And for not fulfilling the enemy’s assignment to you, were you not afraid of being subjected to repression by the Gestapo?

Answer: I was afraid, but, being in front of the people, I did not dare to make a vile lie to the Soviet authorities, the Soviet reality and the Russian Orthodox Church. ”

Immediately after the consecration of the temple, the Rostov commandant met with Chernov and suggested that, with the approval of the German authorities, they should leave for the city of Rostov-on-Don, ostensibly to hold services in the churches. Upon arrival, the bishop was summoned to the commandant's office, where the commandant, together with the Rostov dean Vyacheslav Serikov, invited Chernov to take part in the spiritual support of prisoners of war. It was, as Vladyka understood, about those prisoners of war who voluntarily surrendered and from which the collaborationist units were formed: “I gave a negative answer. Then the commandant declared to me that he possesses data incriminating me in the work of the Soviet Union, but did not back up his words with anything. I disproved the arguments of the commandant. During the further conversation, the commandant asked me how I could help the German army. To which I gave an evasive answer. After listening to me, the commandant demanded that I engage in fascist propaganda. Propaganda, in his opinion, is more precious than gold and stronger. weapons. In the sermon of fascist propaganda, I refused. After that, the commandant announced to me that I was forbidden to go to Rostov and Novocherkassk and manage the church according to the order of General Kleist. And under escort from Rostov sent me back to Taganrog. ”

According to the aforementioned Serikov, who was also arrested in the 1944 year, the Germans offered to Bishop Joseph "to raise Hitler to the rank of a saint," which was refused.

By order of the deputy burgomaster Akimtsov, who took an active part in the church life of the city of Taganrog, Chernov wrote three articles of an anti-Soviet character to the local collaboration newspaper Novoye Slovo.

October 17 The 1942 of the year was published an article entitled “The Cross crowns the temples again,” written for the anniversary of the occupation of Taganrog. December 16 The 1942 of the Year was published a “Christmas greeting” signed by the bishop, devoid of any political tint. Another article was prepared for the celebration of the New Year. 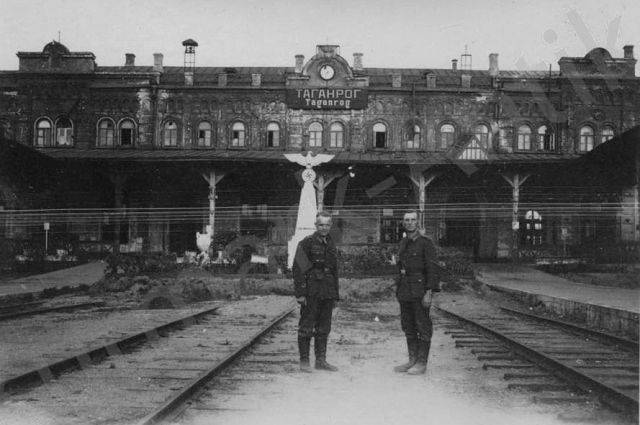 According to the local ethnographer M.S. Kirichek, “the occupation of Taganrog began much earlier than other districts of the Rostov region - October 17 1941 of the year and lasted almost two years - until August 30 1943 of the year. During the German occupation of the Rostov region, temples were massively opened on the ground. The first time the opening of the temple in the area occurred in Taganrog. In December, the cemetery church of all Saints was opened here on 1941, the head of the church was the first to appeal to the new authorities with the request to open this church ”(Kirichek, MS. Sacred domes of Taganrog. History temples, lost and existing. Taganrog, 2008 year. C. 122).

According to other sources, the Holy Cross Church of the Episcopal Church resumed its first service in Taganrog (“The Light of Joy in the World of Sorrow: Metropolitan of Almaty and Kazakhstan, Joseph S. S. 145). In it, Bishop Joseph began to serve.

Since Joseph Chernov was the only bishop before Archbishop Nicholas Amassysky arrived in Rostov, he approved V.A. Serikov, in the past, the abbot of the Rostov Cathedral, as the Dean of Rostov. Serikov on the orders of the Germans was later organized in Rostov diocesan administration to guide the churches of the regions of the Caucasus, Kuban and Don occupied by the fascist troops.

At the end of September, 1942, Chernov was forced to give a written explanation regarding the arriving Archbishop Nikolai Amassysky: “The Gestapo demanded an explanation from me that Amassiy, allegedly, was conducting an agitation against the German forces. I wrote about it in such a way that I didn’t hear such agitation from Armasia. ”

Around the same time, the pages of the newspaper Novoe Slovo actively criticized the religious revival in Soviet Russia with reference to the Berlin newspaper Novoe Slovo: Religious Freedom in the USSR, which, if carried out at present, is solely for political reasons. The article “The NKVD in episcopal attire” stated: “The supposed opening of churches in the Soviet Union did not seem to find a special response abroad. Now Soviet agitation, with the help of the NKVD, resorted to a new trick, which should dispel the last doubts of foreigners who have not yet fully believed. Recently, in the Soviet press, messages of people of different faiths addressed to Stalin have often come across. ”

In Taganrog, Joseph Chernov stayed from August 1942 to February 1943, when he unexpectedly received an order to leave Taganrog for Ukraine, to the city of Melitopol. But he went to Kakhovka, where he stayed from March to June 1943, and then returned to Taganrog. Upon his return, the bishop consecrated St. George's Church, speaking, as usual, with a religious sermon, and also served a requiem service to Peter I during the opening of the monument by the city garden. 19 July 1943 was relocated by the German authorities to a monument to Peter I by the sculptor Antokolsky from the seashore to his historic place in the city center on Leninskaya Street, from where the monument to Lenin was removed. 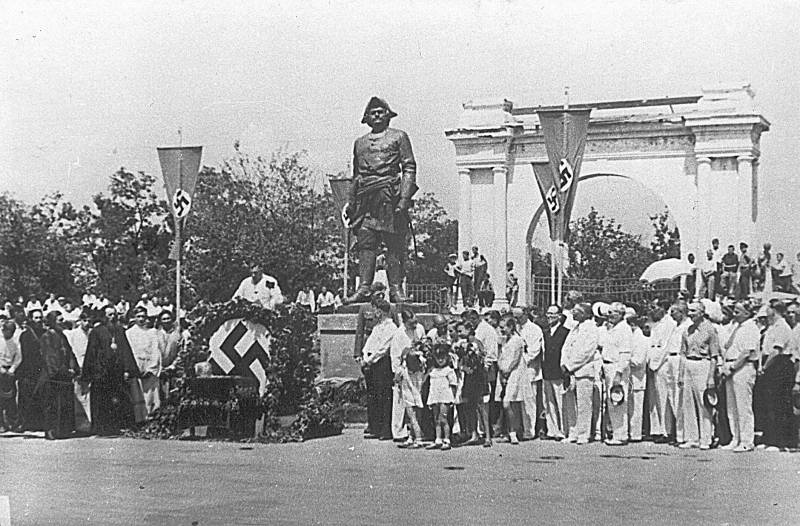 On the square near the monument, Joseph Chernov, after the memorial service, gave a speech in which he thanked the Germans for moving the monument to the old place and proclaimed the many years of the German army. “At the opening of the monument were attended by employees of the burgomaster, the police and representatives of the German command, everything happened in a solemn atmosphere, except Akimtsov, and some German, spoke, and some general was expected to arrive. After the whole ceremony, a gala dinner was held at the theater. ”

Other witnesses described the events somewhat differently: “By 12, the people were gathered for hours. The Deputy Commander rose to the podium decorated with flowers and a fascist swastika. He made a congratulatory speech addressed to the city and its inhabitants on the occasion of the restoration of historical justice, the return of the monument to the founder of Taganrog to the historic place. Other speakers followed, including the burgomaster of the city. But the word was taken by Bishop Joseph of Taganrog. With absolute silence, he began to talk about Tsar Peter I and the role he played in the establishment of the Great Russian Empire. Then the orchestra rang out the prayer "God, Tsar God bless." The theme ended with a song by Ivan Molchanov performed by the choir “It was a case near Poltava”. 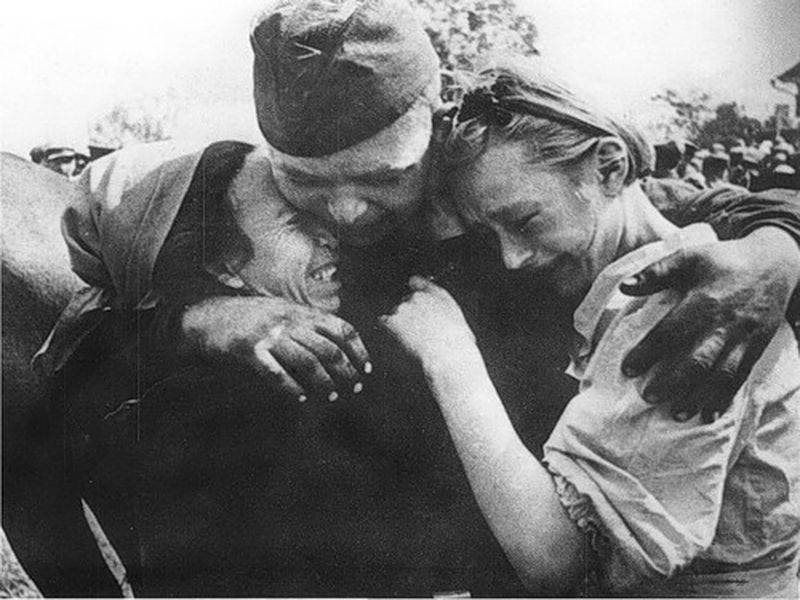 The Soviet NKVD authorities arrested Bishop Joseph in June 1944, after the Germans retreated into the territory of Ukraine. He was accused of belonging to German intelligence and was asked to explain how he stayed alive, while he was listed as shot in the list left by the Gestapo: in the city of Uman in the fall of 1943, the Bishop was arrested by the Gestapo and sentenced to death by both English and Soviet spy. And again foggy answers.

Bishop was tried in 1945 year as an agent of the Gestapo and the secret "John" (a follower of the sect of admirers of John of Kronstadt), the organizer of a secret monastery in the city of Azov. In the case, 43 of the person, mainly of the “Johannites”, was held with him.

Chernov recognized only one of the numerous points of accusation (among them even the Patriarchal Church’s condemnation), namely: anti-Soviet publications in the newspaper Novoe Slovo, a speech at the transfer of the monument to Peter I from the seashore to the city center and the collection of clergy biographies for transfer to the Germans at their request.

“According to the verdict of the military tribunal of the North Caucasus Military District from 11-19 in February 1946, Joseph Chernov was sentenced to 10 years of forced labor camps. As a “particularly dangerous state criminal,” he was sent to a special camp of the Ministry of Internal Affairs near Chelyabinsk ”(source: The Clergy magazine, 1995 year).