Admiral Kuznetsov will take control of Eastern Mediterranean: US fears and A2 / AD strategy 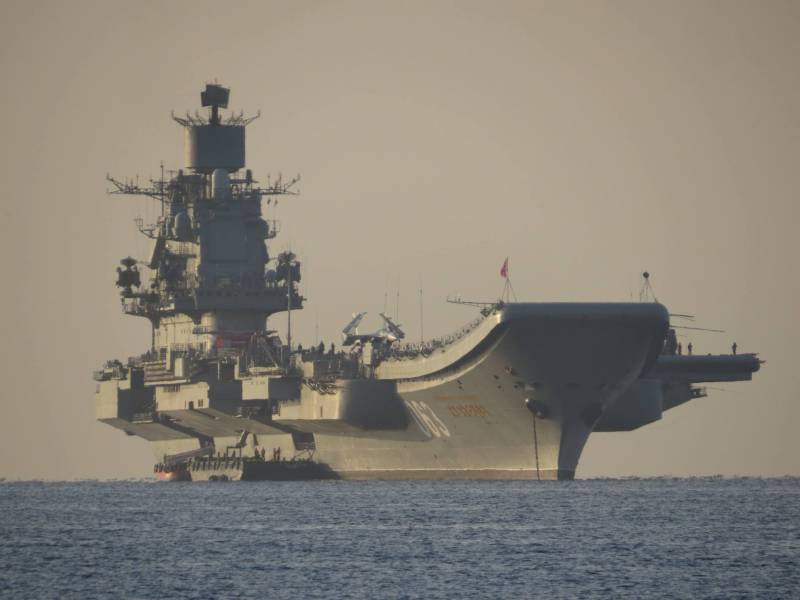 Recently, in the United States, the concept of a so-called strategy for restricting and prohibiting access and maneuver A2 / AD (Anti-Access / Aria Denial) has been introduced to consider the Russian defensive and offensive potentials on the extreme frontiers of Eastern Europe and the Baltic States. In the understanding of American officers, this is the deployment of advanced military units equipped with the most modern models of equipment that do not allow the enemy (in our case, the US Armed Forces) to choose a maneuver that allows them to break through the defenses on the weakest portion of the probable line of demarcation. This strategy provides for the complete absence of such “gaps”. The most effective use of the A2 / AD strategy by our army is noted by the Americans in the Gulf of Finland, the Kaliningrad Region, and also in the Republic of Crimea. Even the eminent edition of the National Interest, referring to the former NATO Commander-in-Chief in Europe Philip Bridlaw, notes the insufficiency of both the rapid reaction force and the NATO Combat to overcome such lines of prohibition of access and maneuver. The concept of a NATO bloc for these purposes mainly uses the United Air Forces, the capabilities of which are not enough, and it is not enough to suppress the A2 / AD basis presented in our VKS and SV C-300 / 400, C-300B4 systems and "Pantsir-С1". It is worth saying that the skillful use of this strategy by the Russian Armed Forces seriously undermines morale in Washington, but it is even more undermined when A2 / AD moves from Russian outposts in the Baltic Sea and the Black Sea to remote areas of interest and influence of the Russian Federation. Syria and the eastern part of the Mediterranean Sea are included in the list of these zones.

Some time after the decision by the US Navy command to send an additional 2nd AUG led by the nuclear carrier CVN-69 USS “Dwight D. Esenhower” to the Syrian coast navy Russia took a retaliatory measure, which involved the use of the heavy aircraft-carrying missile cruiser Admiral Kuznetsov in a military operation in the territory of the Syrian Arab Republic. This is the first operation as close as possible to the conditions of hostilities of the only Russian flagship aircraft carrier 25 years after the solemn raising of the St. Andrew’s flag on board. The participation of the Tavkr pr. 1143.5 at the Syrian theater was announced on July 2 from the capital's military-diplomatic department. The ship will be on alert off the coast of Syria for 4 months (from October 2016 to January 2017).

The tasks of the 279th Separate Naval Fighter Aviation Regiment (OKIAP) based on the twice Hero of the Soviet Union Boris Safonov, which will be based on the Admiral Kuznetsov’s board, will include bombing missiles in the military-technical, training and production infrastructures of the Islamic State in the central and eastern provinces of the SAR, and therefore, it was initially reported that the flagship would stop in close proximity to the coastline so that the combat radius of the deck aviation confidently reached the necessary milestones for the use of weapons. The skills that the aircraft carrier’s crew and the flight crew of the 279th OKIAP should receive, of course, cannot be called a full-fledged “baptism of fire”, since there’s no need to repel RCC “star raids” on an aircraft carrier, nor will there be a need for carrier-based aircraft to conduct an air battle with the enemy, which has no aircraft, but the atmosphere and electronic environment will seriously resemble a military conflict between Russia and NATO.

The American carrier-based aviation, as well as the tactical aircraft of the Royal Air Force of Great Britain operating from the Akrotiri airbase on the island of Cyprus, will “probe” the radio capabilities of Admiral Kuznetsov’s radar equipment, and, if possible, also the characteristics of the on-board 90 radar fighter aircraft Su-15 and 33 MiG-4K / KUB, as well as an early warning helicopter Ka-29 "Helix-B", which is the only long-range radar detection tool on the aircraft carrier. For the purpose of full "illumination" of all ship and airborne radar stations located on Kuznetsov, the Americans and the British can use absolutely any air tactics: from approaching at ultra-low altitude to locking in the far zone of the defeat zone of the Kinzhal kvrk missile. raise Su-31.

They will be interested in the level of noise immunity of our radars, which can be determined using on-board radio-electronic equipment of such aircraft of electronic warfare and reconnaissance as the E-F-18G “Growler” and RC-135V / W “Rivet Joint”. At the wing tips, sides of the forward fuselage, engine nacelles and the rear part of the Groiler, at least 2 container and 4 embedded AN / ALQ-218 radio-emitting targets (V2) are installed. The goals of the perfect from any angle are detected. The information is then received by the onboard computer, where it is processed, if possible, compared with data received from other units via the Link-16 tactical communications system or ICANS, after which the DER / RTR system operator is determined by selecting the required REP station depending on the type of signal suppressed. If this is an enemy radar complex, then LR-700 antennas are selected, if the radio station or tactical information exchange terminal (communication), then low-frequency broadband transmitters ALQ-99, located in the outboard containers, or REB AN / ALQ (V) 1 CCS installed in the niche of the aircraft gun.

At the same time, the AN / ALR-67 (V) 3 SPO can simultaneously notify the pilot, for example, about how the enemy’s radar operating modes change at the time of exposure to radio-electronic interference, which will give the answer to the question: not possible? In air combat, the knowledge of such "numbers" as applied to the enemy radar gives a sure success. Rivet Joint also has equipment for analyzing the operating modes of enemy radars. The AMR AM / AMQ-15 complex unites two major subsystems for the detection, classification and identification of radio signals. The first, AEELS, determines the exact coordinates of air and ground targets by radiation, the second, MUCELS, accurately identifies the operating mode of the radar signal and also works on methods of suppressing encrypted radio channels. Through the Link-16 communication channel, communication between the Rivet Joint, E-3C / G, E-2D and Growler boards can be maintained. Naturally, our Tu-214P and Su-34 with "Khibiny" also track all the principles of NATO radar and communications, but in order to avoid opening their own radio electronic capabilities, the entire carrier-based Kuznetsova aircraft often use optical-electronic sighting complexes OLS- 27K and OLS-UEM, initially focusing on the targeting of the Ka-31 and MR-MPN-750 Fregat-MA radar, as well as the Mars-Passat radar station.

“ADMIRAL OF KUZNETSOV” AS A BACKGROUND OF THE STRATEGY “A2 / AD”: “BONE IN THE THROAT” OF THE AMERICAN FLEET 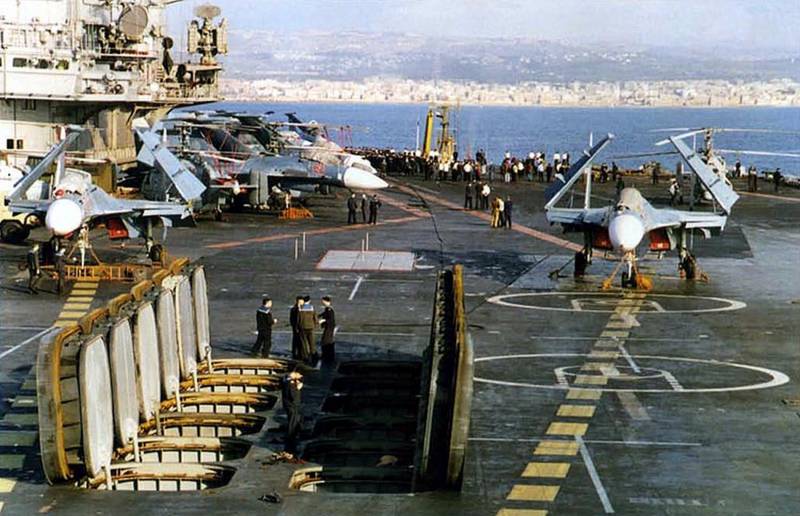 The open sash of the underdeck 1х12 PU SM-233A of the Granit anti-ship missile complex П-700 aboard the Admiral Kuznetsov air-lift unit. Each launch module has a slope of 60 degrees, and the launch itself is carried out when the module is filled with water to reduce the high-temperature impact of the products of combustion of the solid-fuel accelerator on the module and the internal components of the aircraft-carrying rocket cruiser

Let us return to the main binder of our military-strategic influence and the attempts of the US to counter it in the form of a strategy to restrict access and maneuver “A2 / AD”. It is easy to understand the whole acuteness of the stay of the Russian aircraft carrier cruiser for the US Navy, who wish to maintain complete domination on the sea approaches to the SAR. The United States continues to refuse military operations against the IG jointly with the Russian Aerospace Forces, and the terrorists are “ironed out”, frankly, only where it does not cause them serious damage, because they can be useful to them at any time to conduct a “game” against the pro-Syrian army .

Entered in the Eastern Mediterranean, Admiral Kuznetsov with 279 OKIAP will create significant problems for the US AUG in terms of access and maneuvers of carrier-based US aviation over almost half of the Mediterranean. If we carefully examine our wing, it becomes immediately clear the distribution of tasks between fighters of different classes. So, MiG-29K and more advanced MiG-29KUB (generation "4 + / 4 ++") will be used mainly for strikes against ISIS foci in Syrian territory. For this, the most diverse rocket-bomb armament will be used (from guided bombs with semi-active laser guidance to X-29L / T missiles). Suspended fuel tanks at MiGs will allow Admiral Kuznetsov to be located not only near the territorial waters of Syria, but also closer to Cyprus, or even south of it.

This tactical feature extends the capabilities of the second, purely anti-aircraft, part of the 279-th - Su-33. These deck fighters-interceptors are equipped with a standard airborne radar H001, which has only the mode of "air-to-air". But the radius of action of these planes reaches 1500 km at high altitude without PTB. A link from the 2 or 4 of the Su-33 will be able to conduct regular patrols and aerial surveillance of surface ships and NATO aircraft right up to the coast of Italy. In addition, the sea "Dryers" carry an improved arsenal of R-27EM air-to-air missiles optimized for intercepting complex and small air targets against the background of the water / land surface. Su-33 pilots will be assigned the task of controlling the sea boundaries of our AUG in the Mediterranean.

Admiral Kuznetsov’s self-defense, built on the Dirks, Daggers and AK-630, is equivalent to the 5-7 of the Nimitz-class nuclear aircraft carriers, which makes the enemy think well before attacking this unique NK. The arsenal of the 9М330-2 and 9М311К missiles makes up the 448 missiles, and the total fire channel, together with the AK-630, reaches the 54 simultaneously fired at the CC.

For the entire wing of the air, this mission will be the first “semi-combat” test in which our sailors and pilots will learn to act quickly, deliberately and comprehensively in conditions where they can be separated from several tens of kilometers to a couple of hundred meters from a likely numerically superior enemy. Of course, they will need to remember the twelve "fiery" "Granites" under the deck, which without exaggeration can create a real shipwreck in enemy naval formations.

The source of information:
http://www.b-port.com/news/item/183551.html

Ctrl Enter
Noticed oshЫbku Highlight text and press. Ctrl + Enter
We are
The danger of a complete replacement of the "Dirks" and "Daggers" with the new shipboard M-Tor and Wasps of the 21st centuryUpdated "Admiral Nakhimov": when "Ohio" and "Zumvalty" are not terrible
Military Reviewin Yandex News
Military Reviewin Google News
144 comments
Information
Dear reader, to leave comments on the publication, you must sign in.