Historical memory fails, or why ranks of patrons and defenders of neo-Nazis grow

July 4 2016
57
Last Friday, the Parliamentary Assembly (PA) of the Organization for Security and Cooperation in Europe (OSCE) opened in Tbilisi. Her session began with the meeting of the PA Standing Committee, which discussed the upcoming agenda for the five-day session. The Committee did not include a resolution proposed by the Russian delegation for the Assembly, which calls for the development and implementation by OSCE participating States of joint measures to prevent manifestations of neo-Nazism. On this on Friday, with reference to the head of the delegation of our deputies at the assembly of Nikolai Kovalev, reported the leading news agencies of Russia. 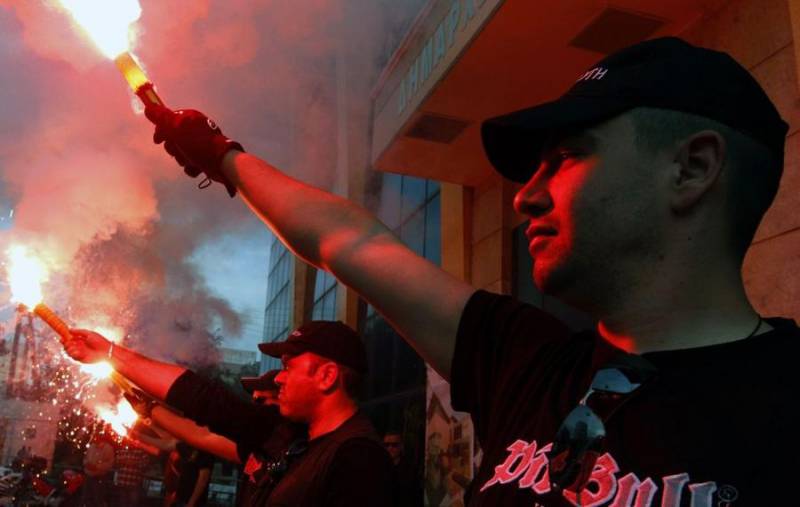 Europe cares little about the spread of neo-Nazi ideas

As Kovalev informed the media, Germany, Canada, Latvia, Macedonia, Poland, Portugal, the USA and Ukraine voted against the Russian draft resolution. The head of our delegation noted with regret that "the standing committee actually acknowledged the impotence against the spread of the ideas of neo-Nazism."

As is known, the Nuremberg International Military Tribunal declared illegal the spread of national socialist ideology and its symbolism. This provision became the basis of the Charter of the United Nations (UN) formed after the great war. Since then seventy years have passed. In some states, they no longer take into account the demand of the international community to ban Nazism. In other governments, they started to revise the outcome of the Second World War.

In such conditions, Russian diplomacy took upon itself the burden of responsibility for fighting the glorification of Nazism and revising the outcome of the war. At the UN General Assembly sessions, the Russian delegation annually proposes resolutions condemning the practice of modern neo-Nazism. These documents enjoy the stable support of the global community.

For example, in 2014, a similar resolution was passed by Russia in collaboration with the delegations of 40 states. 115 from 193 UN Member States supported it. Only three countries voted against - the United States, Canada, and Ukraine. 55 delegations abstained from voting, including all EU countries.

Last year, a similar document was supported by delegations from 126 countries. True, the opponents of the resolution added the state of Palau. Ukraine to this dubious company nailed after Maidan. The reason for the change in its long-term position is easily explained by the fluids of neo-Nazism that hover today in the political atmosphere of Kiev. Public explanations of the Ukrainian delegation look somewhat different, demonstrating their controversy and strangeness.

Thus, the Ukrainian diplomat Andrei Tsymbalyuk noted that millions of his compatriots became victims of "one more totalitarian regime - Stalinism." Therefore, “until Stalinism and Neo-Stalinism are equally condemned, like Nazism, neo-Nazism and other forms of intolerance, Ukraine will not be able to support this document.”

Representatives of the United States and Canada called the draft Russian resolution “politically motivated” then. However, they were always much on the pretense, constantly voting together against documents condemning the spread of the ideas of neo-Nazism.

Other allies of the Americans abstained from the vote. In Tbilisi, they for the first time discarded decency, and immediately the delegations of six European states spoke out sharply against the fundamental demands of the Nuremberg Tribunal. It is difficult to regard it differently than patronage of neo-Nazi parties and groups of their countries.

When masks of decency are dropped ...

The number of such parties and communities has recently multiplied. In April last year, on the eve of the celebration of the 70 anniversary of the Great Victory, the Ministry of Foreign Affairs of Russia issued the report “Neo-Nazism - a dangerous challenge to democracy, human rights and the rule of law”.

This fundamental document details the current neo-Nazi tendencies. It is shown how the states of the world observe international legal obligations on counteracting Nazism and neo-Nazism. The picture turned out to be alarming.

The largest of these organizations is the NSD has 60 offices in 35 states. She regularly holds provocative events, for example, marching her thugs in a Nazi uniform with a swastika. They are held mainly in areas with a large concentration of racial and national minorities.

NSD often devotes its events to dramatic events. historical events. So it was in November 2013, when the National Socialists, together with representatives of the Aryan Nations and the Sadist Souls motorcyclists, held a rally in Kansas City to mark the 75th anniversary of the Jewish pogrom during Kristallnacht.

The report of the Russian Foreign Ministry provides a large list of such actions of neo-Nazis and extremists. As a rule, they are held under the protection of US law enforcement agencies. The official version is to prevent unrest as a result of clashes between extremists and their opponents. As we can see, the ban on neo-Nazi groups is not in question.

The "Brotherhood of Veterans of the First Ukrainian Division of the Ukrainian National Army" stands apart among these organizations. This group has direct (including related) ties with accomplices of the Nazis from the SS division “Galicia”. Its main goal is to justify the war crimes of the Ukrainian SS.

Make it easy. The world is well aware of the crimes of “Galicia”, the division’s connection with the fascists, and even the way Ukrainians took the oath to Hitler: “I, a Ukrainian volunteer, voluntarily surrender myself to the German Army with this oath. I swear allegiance to the German Leader and Supreme Commander of the German Army Adolf Hitler in unchanging loyalty and obedience ... "

Across the ocean there are forces interested in whitewashing the Ukrainian SS men. This story began immediately after the war. The Ukrainians from the Galicia division were then separated from the captured Germans and placed in a camp in the vicinity of Italian Rimini. The Vatican called this rabble "good Catholics and devoted anti-communists." Their status was changed from "prisoners of war" to "surrendered enemy personnel" and instead of being extradited to the Soviet Union, they were transported across the ocean.

They settled in the United States and Canada. Only about three thousand Ukrainian SS soldiers moved to Canada. Forty years after the war, the Canadian War Crimes Commission in 1985-1986 recognized the “lack of collective responsibility for the war crimes of the Halychyna division.

In addition to the already mentioned "Brotherhood" are active in Canada, "League of Ukrainian Canadians" and "Society of UPA veterans". It is through their efforts in various regions of the country that several monuments to OUN-UPA soldiers have been erected, the theme of “crimes of communism” is unwound, which even Bandera’s people believe here are victims. Ukrainian nationalist organizations made sure that official Canada recognized the “famine”.

The World Ukrainian Congress (WCC), under whose wing the listed organizations operate, took control of the nationalist movements in Ukraine itself. Here a number of neo-Nazi, ultra-radical parties and organizations entrenched in the political field. These are the Ukrainian National Assembly - the Ukrainian People’s Self-Defense (UNA-UNSO), “Patriot of Ukraine”, “Right Sector”, the association “Trident” to them. Stepan Bandera, "Congress of Ukrainian Nationalists", "Brotherhood", "White Bridge".

A special place in this company is occupied by the All-Ukrainian Association "Freedom". In the 2012 election of the year to the Verkhovna Rada of Ukraine, it received an 10,44% vote. Meanwhile, the leaders of "Freedom" (O. Tyagnibok and I. Miroshnichenko) according to the classification of the international human rights organization "Center. Simon Wiesenthal "awarded fifth place in the list of the most dangerous anti-Semitic activists in the world.

Other countries that have blocked the anti-Nazi resolution of the Assembly in Tbilisi have their “heroes”. In Germany, for example, there are more than 150 neo-Nazi groups. The ultra-right parties, the National Democratic Party of Germany, the Right Party, the Civil Movement for North Rhine-Westphalia, are legally operating.

In Latvia, they played with the glorification of former Latvian legionaries from the Waffen-SS and national partisan divisions. The special right-wing party “National Bloc”, which is part of the government coalition, was noted with special zeal.

In Poland, there are neo-Fascist movements “National Revival of Poland”, “Creative Church”, “Blood and Honor”, ​​and “Combat 18”. They have extensive connections in Europe. A network of training camps has been created in Poland, where neo-fascists from Germany, Great Britain, Romania, Spain, and Italy are given special combat training.

Examples of active neo-Nazi groups can be found in all European countries without exception. Therefore, the resolution proposed by the Russian delegation is highly relevant for representatives of the OSCE countries gathered at the Tbilisi Parliamentary Assembly. Today, however, political reasons have taken over, the meaning of which is that, among other things, neo-Nazi organizations are mostly Russophobic. In Europe, it is today a popular product. They can justify much.

So close-minded politicians are trying to play the neo-Nazi card, attract radicals and extremists to accomplish their tasks. So it was already in our memory. In one case, the result of such a policy was the appearance in Europe of Hitler, in the other - the terrorist groups Al-Qaeda, ISIL and the like. In the world it brought war, trouble and blood. But it seems that history has not taught Western politicians anything. Radical and dangerous for public people have new patrons, and they are no longer hiding it ...