July 3 2016
62
The military and political leadership of the United States edited its plans to wage future wars in accordance with "new operational concepts" that fully meet current changes in the situation in the world and the growing threats to America’s national security emanating from "revanchist" Russia, from increasing China's military power and also due to the endless chaos in the Middle East. “We conducted an audit of each of our battle plans,” Secretary of Defense Ashton Carter announced 20 on June 4, speaking at the annual conference of the New American Security Center (CNSA) called “The Legacy of National Security: Formulating a Plan for the Next President.” 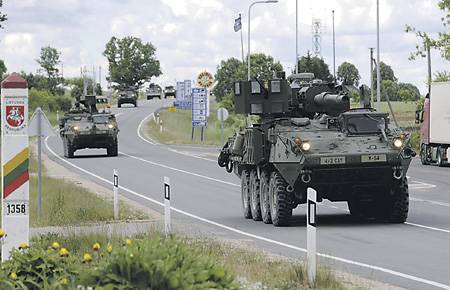 NATO is moving to the borders of Russia. Reuters Photos

CURRENT TASKS OF THE MILITARY OFFICE

Carter told the audience that he could not tell in detail about the specific changes that were made to the operational plans. “I'm not going to talk about the details. But if someone is able to evaluate and understand why I do not do this, then it is you, the participants of the CNS conference, ”the head of the Pentagon said. “But rest assured, they are relevant,” the minister added.

It should be noted that, according to domestic and foreign experts, the Pentagon operates in the framework of operational plans (OPLANS), the total number of which is about 70. Of these, 48 are plans according to which the US Armed Forces should act in certain situations.

But only five of these documents are called “full operational plans”, which envisage military operations of various sizes. Each of them is focused on a specific threat to the national security of the United States, that is, to a specific country that, according to Washington, is a danger to America’s national interests. These five plans also included the global nuclear war plan OPLAN 8044, which used to be called SIOP. Today, this plan appears under the number OPLAN 8010-12. Responsibility for the development and implementation of this plan is assigned to the US Strategic Command. In addition, it is developing plans for delivering conventional and nuclear attacks on North Korea and Iran (CONPLAN 8022-2), anti-missile defense (CONPLAN 8055), and an information warfare plan.

As the Chief Military Officer of America emphasized in his speech, “today's security environment is dramatically different from the one in which the current generation and even the previous one existed a little”. Carter identified five existing and emerging challenges to US national security. This, however, is not for anyone news, but they can not be repeated again.

In the first place, as always, is the need to solve the problem of ensuring opposition to the prospect of Russian aggression and any violent actions of the Kremlin, especially in Europe. Washington's next task is to create conditions for control historical the changes taking place in the vital Asia-Pacific region (APR), where Beijing's role is increasing, which, according to Carter, is "great." However, China's aggressive behavior cannot be rated in the same category. North Korea's nuclear and missile provocations pose a significant threat to America and its allies. Therefore, the United States is forced to strengthen its military contingents on the Korean Peninsula to ensure containment of Pyongyang and counter its aggressive intentions. Another important task of his department, Carter considers ensuring control over the aggressive actions of Iran and the elimination of its "harmful influence" on the situation in the Persian Gulf region. The last place in the list of tasks of the United States and its satellites in different parts of the planet, which was announced by the chief of the American military department, was taken by the fight against world terror, including the fastest destruction of the so-called Islamic State (ISIS) banned in Russia.

Carter said that the recent shooting in Orlando, Florida, which had declared its commitment to ISIS by an extremist, reminded America that the violent militants of this state of violence and horror not only terrorize the people of Syria and Iraq, but also are ready to destroy American citizens, on its territory. This requires the anti-terrorist coalition of the West to take all measures to destroy the terrorists of this pseudo-state, primarily in Syria and Iraq, cut ISIS metastases all over the world and ensure the protection of American citizens from their bloody actions in the United States.

“Today we do not have the luxury of choosing any of these separate radically different threats. We must and will confront them as a whole in the entire spectrum of conflicts arising, ”Carter stated. He also said that the leaders of the military department in the current situation need to act more quickly and flexibly, because, as history has shown, the specialists of the American Defense Ministry "never managed to fully predict the strategic future." “Therefore, we must be prepared to confront a complex and uncertain future, in which new and unpredictable challenges may arise,” the minister emphasized.

The head of the Pentagon said that the United States will remain the unsurpassed military leader for several more decades. The key to this is requests for appropriations from the US Department of Defense in the 2017 fiscal year. According to Carter, these funds will help the US military not only to strengthen military positions and ensure the presence of military contingents in different regions of the Earth, but also ensure the superiority of the Pentagon on land, at sea and in the air. In addition, they will allow American troops to dominate in cybernetic and electronic warfare, in space, in the nuclear field, as well as in other areas of military activity.

Carter devoted much of his speech to the North Atlantic Alliance. He once again announced the continued adherence of the United States to its obligations to NATO countries and emphasized that future military exercises and multilateral conferences of bloc members will be aimed at developing combat skills and general approaches to countering Russian military preparations.

“That is why NATO is adapting and writing a new collection of scenarios,” the American minister announced. According to him, it will include all the lessons learned by NATO warriors in the course of history, as well as measures aimed at re-forming the alliance’s combat-ready contingents into a new network structure capable of counteracting new challenges and effectively operating in cybernetic and hybrid wars, using forms and methods of waging conventional and nuclear wars and creating such a United Armed Forces (OVS) of the bloc, the state and presence of which in various regions of the planet will allow them to more flexibly and their Temporarily respond to any changes in the situation.

Carter stressed that the United States played a major role in organizing the new formation of the NATO Armed Forces - the United Force of Very Fast Response (Very High Readiness Joint Task Force). The military units of the countries of the bloc that are stationed in Europe and deployed in this structure will be deployed anywhere in the NATO theater of military operations during 48 hours. The number of this formation is 40 thous. Military.

“This is a real innovation. It is based on the obligations of most members of the alliance to provide a networked response to emerging crises. And the United States provides unique opportunities for this, including transport Aviation and much more, which will allow the United Nations Very Rapid Reaction Forces (OSFR) forces to act effectively as a network association, ”said the American minister.

At a meeting with NATO defense ministers recently held in Brussels, Carter announced that the United States, Germany and the United Kingdom would make a "major contribution" to ensuring Russian opposition in the future. He also stressed that specific measures in this direction will be discussed at the summit of the bloc, which will be held in Warsaw on July 8 – 9.

Carter also announced that in the financial year 2017, the Pentagon plans to quadruple allocations for the implementation of the European Security Initiative (The European Reassurance Initiative), launched in the 2014 year to increase the American military presence on the European continent. 3,4 billion will be allocated to events under this initiative. According to the head of the Pentagon, this amount of spending is due to the emergence of new threats to Washington’s European allies.

“Among other things, these financial resources will allow for the rotation of a standard armored brigade of a new model of the United States Army, whose units will move at their own speed to Northern Europe. All the necessary equipment and weapons for another will be delivered there. tank the brigade, which will be ready for use by US troops deployed in Europe, ”said the Pentagon chief. He also added that the new brigade will complement the two ground forces brigades already deployed in the northern part of Europe and the army aviation brigade, which has also begun to deploy in the region.

In his speech, Carter touched on the development of military cooperation with the countries of the Asia-Pacific region and the intensification of the fight against world terrorism, and above all with ISIS militants. However, he did not say anything new, but only repeated what he had already repeatedly voiced by himself and other numerous Pentagon officials from various tribunes.

But one fact here is impossible not to mention. 1 May 2014 in the US Senate passed two readings of the draft law No. 2277 “The Russian Aggression Prevention Act of 2014”, 2014. In this rather extensive document, the volume of which is 60 pages, everything that America has to do is painted to finally tame the aggressive Russia, stop further actions of its military units in Ukraine and prevent threats to other sovereign states in Europe and Eurasia.

The first section of this document speaks of the need to strengthen US assistance to the armed forces of their allies in Europe and Eurasia, and also notes the need to intensify US efforts to strengthen the North Atlantic alliance. The draft law provides for the expansion of support provided to Poland and the Baltic countries. It points to the need to accelerate NATO’s efforts to build a missile defense system (PRO) in Europe. In addition, the law provides for the strengthening of cooperation between the United States and the Federal Republic of Germany in Europe and in other parts of the world in the field of regional and global security.

In the second and third sections of the draft law, measures are considered to contain further aggressive actions of Russia in Europe, as well as measures to expand the capabilities of Ukraine and other European and Eurasian states in countering Russian aggression.

Any evidence that this law was approved was not found by the author of these lines on the website of the American Congress. But it is abundantly clear that all the provisions of this law, which in fact declare at least the cold war of Russia, are very actively implemented by the White House.