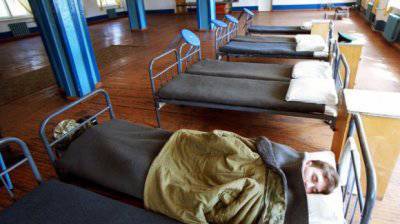 The line of officers who do not have flats, for 3 of the year, was reduced only by 7% and makes up 113 thousand people


According to the report of the Russian Chamber of Accounts, which was received by Izvestia, the Defense Ministry’s line of non-housing officers from 2008 decreased only by 8600 people and by the end of November of the current year amounted to 113,8 thousand people, Izvestia reports.

56,4 thousands of them need permanent housing, which is necessary for officers after dismissal from the army, and 57,4 thousands - in service, which is intended to live during the service. Taking into account the total number of full-time officers in the army, there are thousands of people in 150, approximately two thirds of the military are currently without apartments. Also, contractors, who are not provided for the provision of individual apartments, are not taken into account.

At the same time, in the period from 2008 to 2010, the government spent more than 280 billion rubles on apartments for officers. The Ministry of Defense for the money for the officers acquired and built permanent apartments - 97 thousands, service apartments - 9,2 thousands. In addition, a thousand housing certificates were issued to the military by 21.

But most of the objects of the military department are still in operation. According to the Accounts Chamber data, as of 1 in October 2011, 775 residential houses, the total cost of which is 109,6 billion rubles, remain unfinished.

- The 2008 – 2010 housing commissioning plan is executed on 45%. Instead of 288 housing projects that were planned for commissioning, 129 was built and put into operation, the report of the Accounting Chamber noted.

In large cities, despite the requests of officers who, by law, have the right to choose any city in the country to receive an apartment, housing was not built at all. So, according to the auditors, in Moscow the unmet need for housing amounts to 9225 apartments and 2016 apartments in Rostov-on-Don. The situation is not saved and the courts - more than a thousand decisions were made in favor of the officers, but the apartments were not given for them.

However, some of those who received apartments cannot always live in them due to the lack of engineering and social infrastructure. A similar situation, in particular, is observed in the Moscow region Balashikha and Podolsk in the “military” microdistricts that are not provided with pharmacies, shopping centers, laundries, shops, and other social and cultural facilities.

As a result, the officers have unclaimed 3600 apartments, the cost of which exceeds 7 billion rubles. For the maintenance of this housing stock from the Ministry of Defense require more than 200 million rubles.

The Ministry of Defense keeps secret the reasons for such a situation. T. Shevtsova, the Deputy Minister of Defense, who oversees the housing program, declined to comment on the situation.

In an interview with Izvestia, the head of one of the departments of the Ministry of Defense, which deals with housing, said that most of the comments arose as a result of the reorganization of the management bodies responsible for the construction and further distribution of the housing stock.

- Previously, after the completion of construction, residential buildings were transferred to the balance of apartment maintenance units. Today they hang on the balance sheet of the property relations department, which pays for their maintenance. From here, 775 unfinished houses that are physically built and ready to move in, ”said the Defense Ministry spokesman.

According to him, there are only about two dozen houses throughout the country.

- This situation is mainly due to the bankruptcy of contractors who won the tender at the time, but could not fulfill their obligations. However, there are only a few such cases, the Izvestia interlocutor noted.

He also said that problems with social. infrastructure in the "military" neighborhoods due to the fact that the creation of pharmacies, shops, hairdressers and laundries should be handled by regional authorities.

- We only plan and build housing. The social sphere is also under construction, it’s just being done more slowly by the regions. In this regard, a situation arises when homes are already built, and supermarkets, schools, kindergartens, etc. are only planned, said a representative of the Ministry of Defense.

In addition, because of the bureaucratic procedures that are associated with the registration of land, ownership of buildings, transfer them to the balance of municipalities, setting in management companies for maintenance, about 90 of thousands of apartments are currently uninhabited.

- These apartments between the officers have already been distributed, and immediately after the completion of the paperwork, they will be able to enter them. The settlement of these apartments, according to our calculations, will take place in the first quarter of 2012, the source told Izvestia.

In the 2011 year, he said, approximately 30 thousands of permanent apartments and about 10 thousands of service buildings were built for officers. In 2012, construction of 25 thousand permanent and 10 thousand office apartments is planned.
Ctrl Enter
Noticed oshЫbku Highlight text and press. Ctrl + Enter
We are
The action “Military service under the contract is your choice!” In Rostov-on-Don: future contract servicemen, exhibitions and “Russian Knights”
Military Reviewin Yandex News
Military Reviewin Google News
112 comments
Information
Dear reader, to leave comments on the publication, you must sign in.